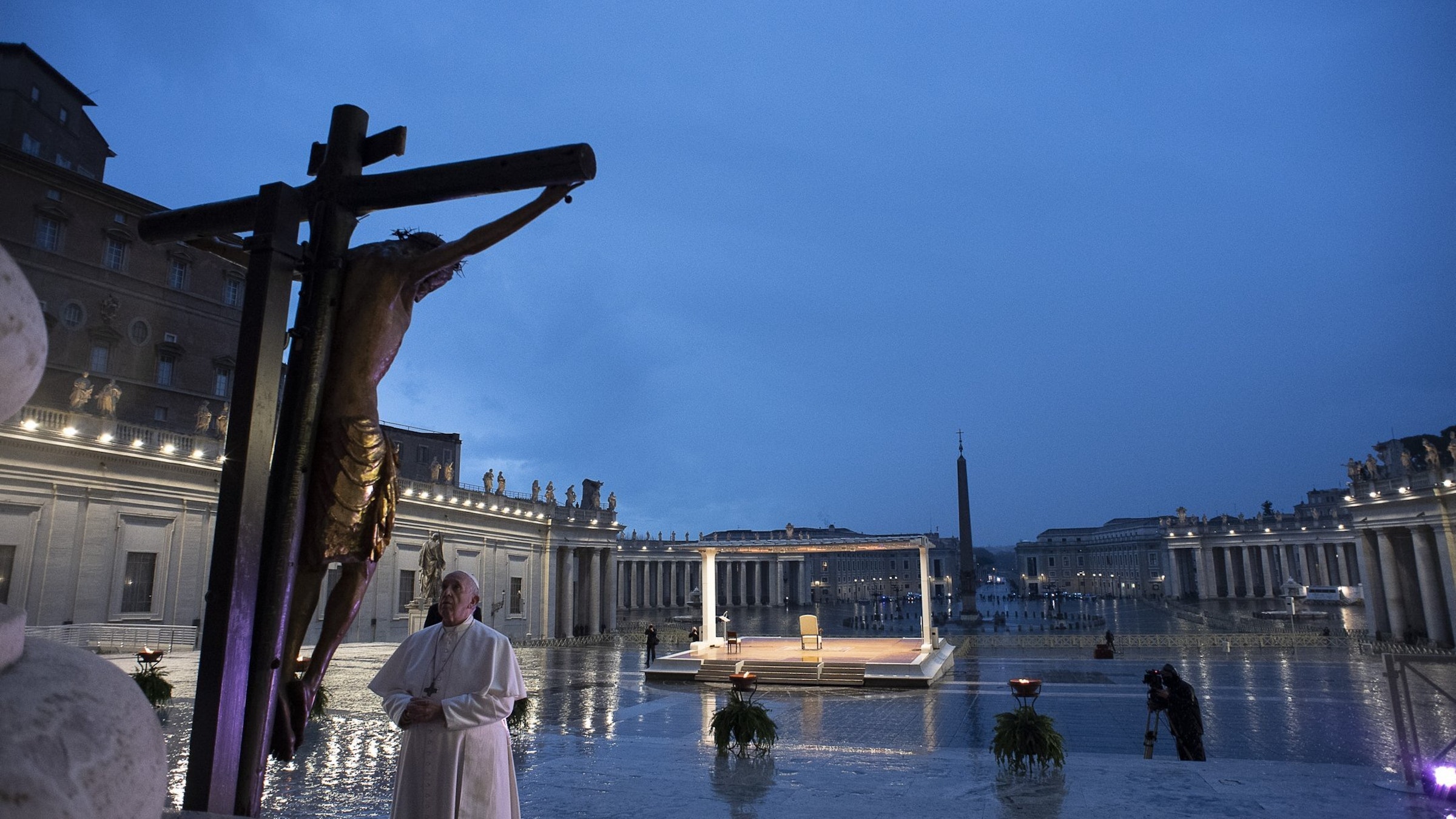 Pope Francis prays in front of the "Miraculous Crucifix" from the Church of St. Marcellus in Rome during a prayer service in an empty St. Peter's Square at the Vatican on March 27, 2020, at the start of the COVID-19 pandemic. "Embracing the Lord in order to embrace hope: That is the strength of faith, which frees us from fear and gives us hope," he said. (CNS photo/Vatican Media)

Ever had one of those nights when you couldn’t shut your mind off, so you lay awake in bed fearing things that will probably never happen? Yeah, me too. Seems I can fall asleep on command after lunch, but at midnight, I can’t shut my mind off.

Fear is a frustrating, if not compelling emotion; one that can serve or control us. My wife and I recently had a conversation about fear with our youngest daughter, who expressed the “state” of the youth today as she prepares to embark into college and beyond.

“Everyone’s afraid,” she said, “including me.” I was taken aback when she said this. I thought she was “all grown up” by now. Then I realized something. Though our kids — in fact, our students — might look grown up, they still struggle. Someone forgot to warn my wife and I that things don’t necessarily get easier the older our kids get. Sometimes they get more complicated.

I thought about that considering what we’ve all had to face these past few years, in light of recent events, and in light of how this relates to the faith of our youth, both inside and outside of the Catholic school classroom. For the last two years, our kids have been told to be afraid of COVID. About the time that ended, fear reared its head again over another horrendous school shooting. It’s a wonder any of our kids can function.

Albert Einstein once wrote: “A ship is always safe at shore. But that’s not what it is made for.” I was acquainted with fear in my former career as a police officer once or twice. And I learned something: Courage isn’t pretending fear doesn’t exist; it’s forging through it. I haven’t always been perfect at doing that. Perhaps managing it is easier to do when we have faith in a God who’s got our back, even during the most uncertain times of our lives. There must be a reason “be not afraid” is written more than 300 times in the Bible.

In a recent article published in The Catholic Thing, writer David Bonagura highlights a possible reason for excessive fear in our culture. In the column, he quotes Cardinal Ratzinger, who once laid out his concern over man’s desire for a utopia without reference to God. “Man’s hubris,” Ratzinger states, “replaces eschatology with self-made utopia,” which intends to fill man’s hopes without reference to God. This “false salvation” remains perpetually out of reach, yet “each failed attempt generates greater urgency” to attain it.

Ratzinger’s concerns are interesting, because I believe the most vociferous player at the center of this euphoric desire is the fear of not attaining it. Fear can be a good thing. Just as often, it can be a specter created by the media. Perhaps we should remind ourselves: news sources don’t make money by highlighting truth, but by gaining viewers. This cantankerous strategy leads to hopelessness, and it can’t be addressed the way the world does it, but must include the relevance of God.

The headline of another recent news story read, “Belief in God in U.S. Drops to a New Low.” When I actually read the article, instead of just the headline, I was surprised to learn that this new “low” is a whopping 81 percent; a bit higher than the headline suggested.

Maybe that’s the problem. Things get spun to look worse than they are. Now, with the overturning of Roe v. Wade, the misconception being heralded is that our Church is pro-birth, rather than pro-life, and doesn’t care about women’s reproductive rights. Nothing could be further from the truth. This type of carelessness leads to the vilification of anyone who dares to be pro-life, emboldening groups of people into the streets to angrily protest or loot, in response to things they fear.

Maybe the answer isn’t as complicated as our culture makes it. Perhaps we need to look no further than the human nature God gave us. I find it interesting that of the top 10 grossing movies of the last decade, many were superhero films. At the heart of every young man and woman is the desire become one, I believe. Let’s teach them they can be.

But the journey won’t be absent fear. Much like the faith heroes upon whose shoulders we stand, fear was present for them, too. But so was God. And they had faith in that. Let’s teach our kids they can do the same, so they can become the “ships” God intended them to be — so they can leave the safety of shore to “unleash the Gospel” using the talents God has given them.