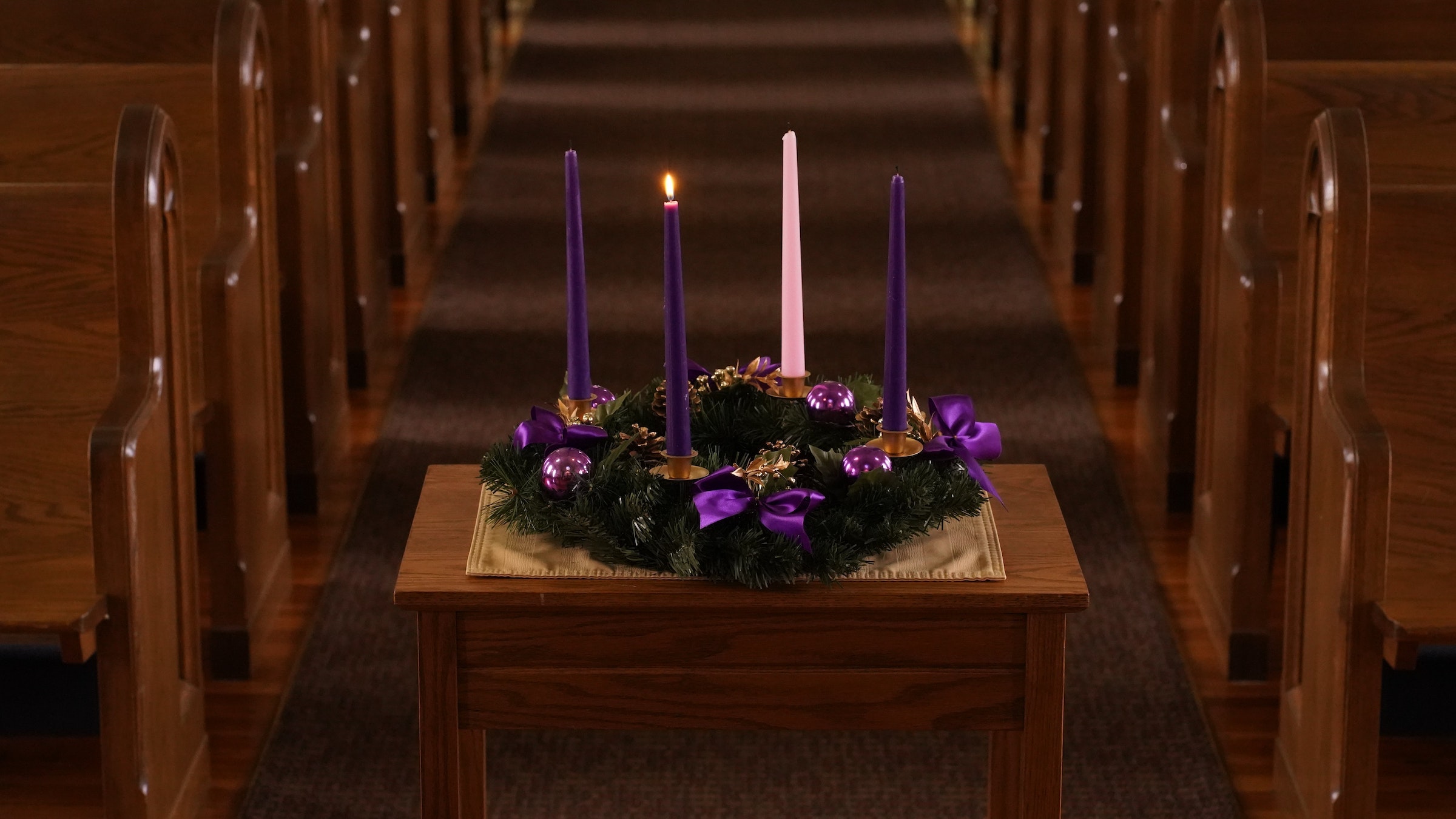 A lit candle is seen on a wreath for the first Sunday of Advent in this illustration photo. The wreath, which holds four candles, is a main symbol of the Advent season, with a new candle lit each Sunday before Christmas. Advent, a season of joyful expectation, begins Nov. 27, 2022. (CNS photo/Gregory A. Shemitz)

Adventtide always comprises four Sundays, but not always four weeks. In some years, truth be told, the last Sunday of Advent is also Christmas Eve.

With Advent starting on Sunday, Nov. 27, Christmas Day falls on Sunday, Dec. 25. So, in the Year of Our Lord 2022, four full weeks will be devoted to Adventtide, a period for interior purification in preparation to celebrate the Nativity of Jesus with clean hearts.

As in Lent, the Gloria disappears at Mass. Vestments on Sundays are penitential: reddish-violet or bluish-purple, save on Gaudete (Latin: “Rejoice”) Sunday, the third Sunday of Advent, when Old Rose or Dusty Rose vestments are permitted as a sign of nearing joy.

The origins of Advent observances are uncertain although the 5th century Bishop Perpetuus of Tours (461-490) commanded a penitential fast preceding Christmas. Britannica relates, “In many Eastern churches, the Nativity Fast is a similar period of penance and preparation that occurs during the 40 days before Christmas.”

At Advent we recall how John the Baptist cried out, “Repent, for the kingdom of Heaven is at hand!’” (Matthew 3:12). We therefore engage in penitential activities.

Penances are not performed to “earn heaven.” Their purpose is to bring about an inner conversion of our inmost being. The ways by which one can perform penance include fasting, almsgiving, meditating after reading portions of Holy Writ, praying the Rosary to end legal abortion and the coarsening of our culture..

More practically, Catholics may also perform corporal works of mercy by giving one’s time to help the elderly or those chronically ill, donating to foodbanks for the poor, or taking part in a prison ministry. And we can always unite our annoyances, frustrations and actual pains to the sufferings of Jesus on the Cross. Indeed, the Catechism of the Catholic Church (#1435), echoing Our Lord’s advice in Luke 9:23, assures us that, “taking up one’s cross each day and following Jesus is the surest way of penance.”

Yes, observance of Adventtide also entails a sense of vigilant preparation for the Second Coming of Christ. The readings for the First Sunday of Advent in each cycle show Jesus describing the signs of the Last Day when He will come, not as Redeemer but as Judge.

Yet, for quite some time, we Christians have allowed Adventtide to become a month of self-indulgence. Many Catholics have too often neglected the penitential aspect of Advent as a means to prepare minds and souls for the Christ Child to be born and live within us.

Neglect of Christ is almost understandable in an age devoted to selfish materialism, academic atheism, technological isolation and progressivist narcissism have shanghaied our now highly secularized culture. Proponents of these defects conspire to obscure, curtail and outright rob Christians of the innocent joy and watchful hope of salvation so central to Adventtide.

Defying these forces, the Church stubbornly calls us to reclaim Advent, making it a time of profound spiritual anticipation through prayer, sacrifice, and cultural detachment to cleanse our souls and be ready to be welcomed by Jesus on both Christmas Day and Judgment Day.

“O Jesus, be Thou not a stranger / But make my heart Thy manger.”

During Advent, we not only call to mind the coming of Christ in time, we also anticipate His Second Coming. This is affirmed at each Sunday Mass as an article of faith:

He will come again in glory to judge the living and the dead, and of His kingdom there shall be no end ... I look forward to the resurrection of the dead and the life of the world to come.

These words apply just as much to our own, particular, Last Day when each of us shall stand before the tribunal of Christ.

This latter aspect of Advent hope and anticipation became forcefully exemplified to me at the end of July, last year. Allow me to explain.

Dennis Ashby was born in Iowa, a gentle giant of intense yet quiet passions and an immensely joyful patriarch. Married to his beloved Carolyn for 42 years, he cherished his daughter, Angelina, her husband Greg and their children Perpetua, Felicity, Leonard, Agnus, Hubert, Robert and Lucia as much as he treasured his daughter, Elizabeth, her husband Scott and their children, Sadie and Sebastian.

Graduating Drake Law School in December 1984, Dennis began his law career with the Iowa Farm Bureau before entering private practice. From 1998 to 2015, he was also the proprietor of the Well Read Bookshop in Des Moines, happily sharing the property with a bakery.

In his off hours, Dennis enjoyed playing bridge at The Bridge Center in Des Moines. He vacationed with his family in the peaceful grandeur of the Black Hills in South Dakota, especially enjoying the Hot Springs at Evans Plunge.

Originally a Methodist, as a foreign exchange student in Brazil, Dennis was attracted to the way Catholics have of “worshipping with all five senses.” An omnivorous reader, he leapt into a personal investigation, finally convincing himself of the truth professed by the Catholic Church. He was received into the Catholic Church in 1978. 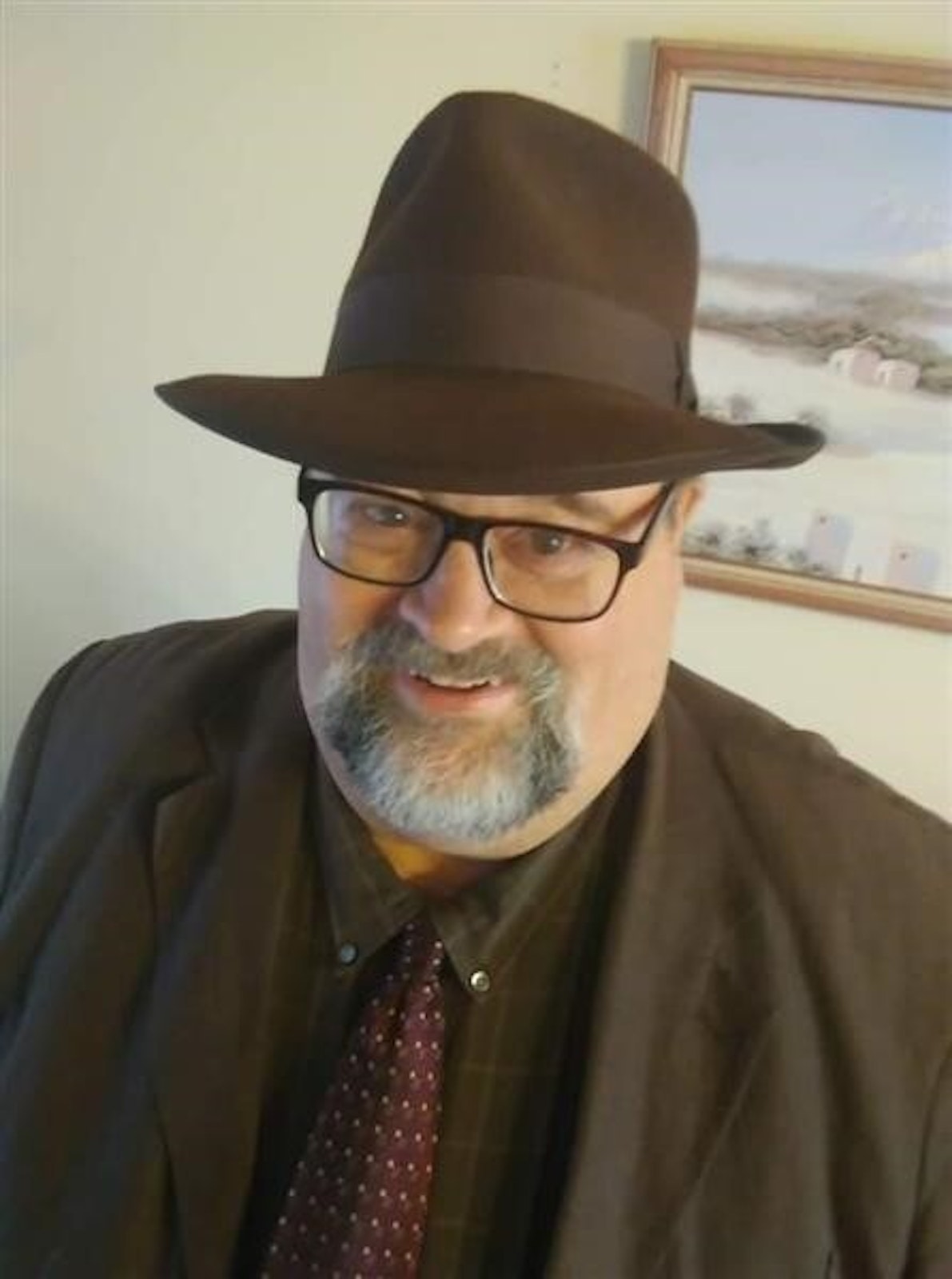 Dennis had an immense collection of fedoras, trilbies and homburgs, all kinds of hats. He dearly loved sharing news, philosophy and his Faith with friends gathered round an ice-filled, well-stocked tub of beer. He did the same online, first with AOL, then on Wireclub. Due to the screen-name he invented, Dashace50, he was affectionately nicknamed “Dash” by all.

In the early years of this century, Dennis and I became unofficial online apologists in the Beliefs Catholic chatroom on AOL. Always respectful of others’ beliefs, he was often eloquent when expounding Catholic teaching. We both believed in the Socratic method of asking questions when answering attacks, usually by people repeating misinformation. I would sometimes hang back, watching his verbal fencing: retreating with an expert parry, or advancing with a well-placed lunge, the point at issue respectfully yet firmly delivered.

Dennis and I soon teamed with a Franciscan friar, Fr. Barnabas, when his duties allowed him time to join in. The three of us particularly delighted in bouncing strings of puns off each other, the lamer the better. Dennis took great delight in my comparing him to Bennett Cerf, the humorist whose witty remarks and wryly horrendous puns were so much a part of the old TV game show “What’s My Line.”

I’ve been using the past tense because, in July of 2021, Dennis my, chatroom friend of 18 years, suddenly learned he had metastatic melanoma which had already entered his lungs and bones, with a prognosis of two weeks to two months to live. Dennis accepted the news with courageous serenity while bidding his friends pray for the intercession of St. Peregrine, patron of cancer victims.

This was the great gift of faith and hope Dennis always showed. Despite the prognosis, miracles are known to have happened. Still, no matter what, Dennis accepted the will of God.

The news spread. People he hadn’t seen in years, he told me, descended on his hospice in droves: business associates, members of his old Scout troop, classmates from law school. Humbled at the outpouring of love, he thanked God for this great gift, noting on his Facebook page:

It is sheer heaven ... as if I am attending my own wake and getting to hear all the lovely half-truths and exaggerations of virtues usually reserved for such an occasion … often have people from two or three of my past lives coming in and out … with pain drugs I may not always be completely cogent and coherent but it is my hope that this reminisce party continue to the end. 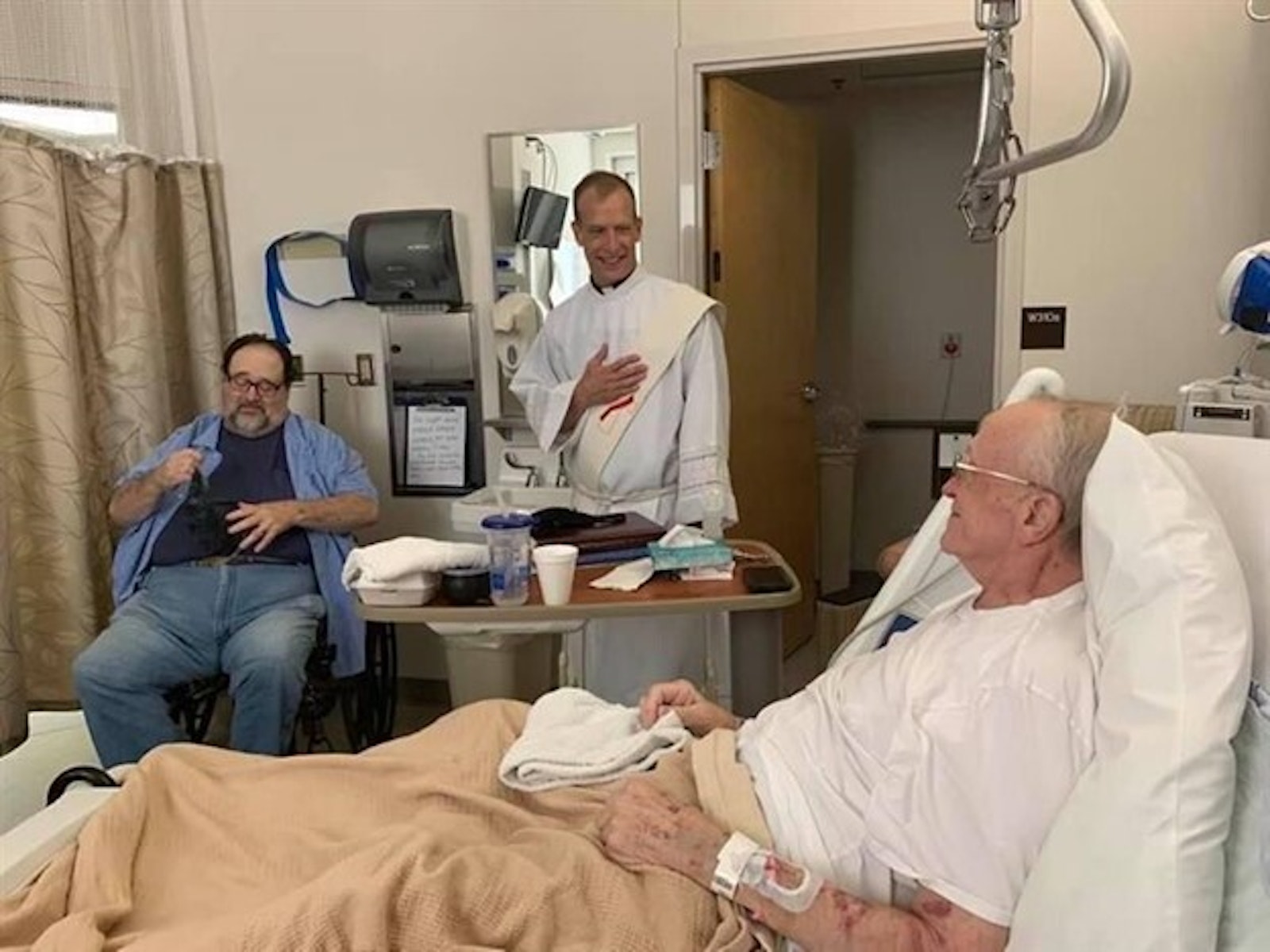 Dennis Ashby, left, after a deacon baptized one of two of his friends last August in his Iowa hospice. (Pictures courtesy of Carolyn Ashby)

And so it did. Dennis told me he had no fear, laughing, “I’ve had Extreme Unction three times and the Apostolic Blessing, I’m ready to go.”

Surrounded by his family, Dennis Ashby ended his personal Advent and passed from this life to meet his Lord on Sept. 7, 2021. But not before bringing two old friends into the Church, becoming their godfather as the deacon from his parish came to his hospice to baptize them.

During Adventtide, be inspired by the simple faith of courageous Catholics such as Dennis, waiting in prayerful hope. Anticipating their stand before Christ, many pray for souls adrift in the world to repent and experience the joyful promises of our Blessed Lord.

With your own soul aflame with love of neighbor this Advent, go, thou, and do likewise.

Sean M. Wright, MA, an Emmy nominated television writer, is a Master Catechist for the Archdiocese of Los Angeles, He is a member of the RCIA team at Our Lady of Perpetual Help parish in Santa Clarita.