Christ doesn't eliminate suffering, but brings meaning from it 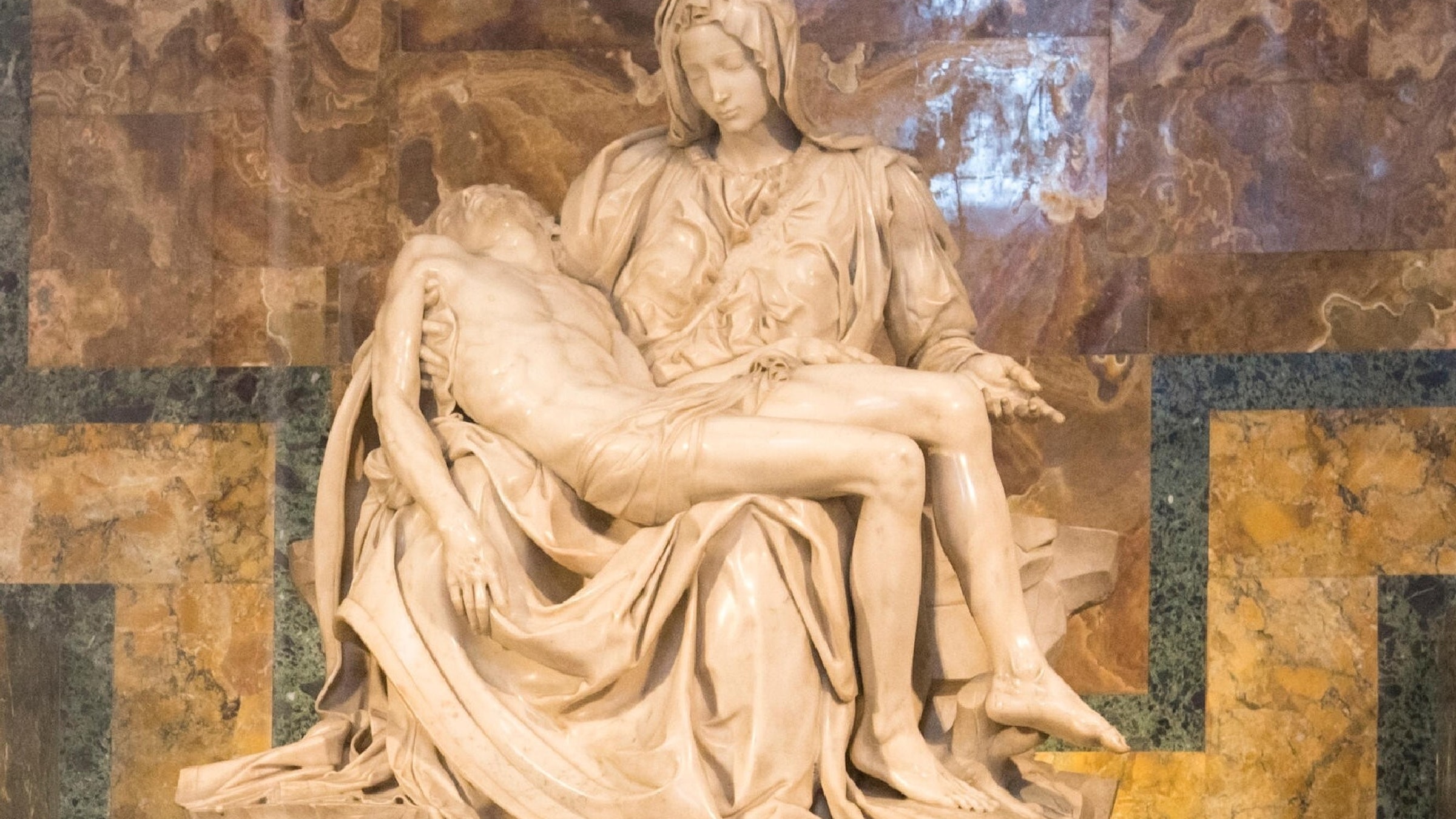 Immediately to the right upon entering St. Peter’s Basilica in the Vatican stands arguably one of the most beautiful statues in the world. Michelangelo’s Pietà depicts a beautiful young Virgin Mary holding on her lap the limp Body of her dead Son. As He is upheld in her embrace, His pierced hand falls toward the ground before the viewers’ eyes, while His once crowned head sinks backward over her arm. And yet, in such a moment of agony, her left hand remains open in offering to the Father, and her face maintains an utterly peaceful serenity.

The year I lived in Rome, my fellow Sisters and I were unable to return to the rest of our community in the United States for Christmas, because of the pandemic. During Advent, anticipating the separation, I visited the Pietà. Gazing at Our Lord in His Mother’s embrace, I remembered that Our Lady is often a symbol for the Church. As Our Lady held her Son during that time of suffering, I realized, Holy Mother Church — so palpably tangible in St. Peter’s Basilica — would be upholding my Sisters and me. And in fact, that Christmas proved to be one of the most beautiful of my life!

As I prepared to leave Rome at the end of that year, I again visited my favorite side altar in my favorite church. There, I realized that though I was leaving that city where I had received so many graces, the Church would continue to uphold me through all my life, no matter where I was. In a way, I was not leaving St. Peter’s; the presence of Holy Mother Church, experienced there in a new way, would be with me forever.

I was reminded of all this recently after reading words addressed by Pope St. Paul VI to suffering individuals. Promising “the friendship and assistance of the Church,” Paul VI expressed the sorrow of the Church’s pastors over their inability to take away pain, but emphasized the value of these individuals’ share in the cross:

But we have something deeper and more valuable to give you, the only truth capable of answering the mystery of suffering and of bringing you relief without illusion, and that is faith and union with the Man of Sorrows, with Christ the Son of God, nailed to the cross for our sins and for our salvation. Christ did not do away with suffering … He took suffering upon himself, and this is enough to make you understand all its value. All of you who feel heavily the weight of the cross … take courage. You are the preferred children of the kingdom of God, the kingdom of hope, happiness and life. You are the brothers and sisters of the suffering Christ, and with him, if you wish, you are saving the world … Know that you are not alone, separated, abandoned, or useless. You have been called by Christ and are his living and transparent image.

It is the mutilated, lifeless figure in the Pietà — the God-made-man tortured and crucified to save us — who brings meaning to our sufferings, great or small. With Him, all suffering has meaning and value. Peace and joy come not from avoiding suffering but rather from embracing it as He and His Mother did. Holy Mother Church supports us in this, especially through her sacraments, in which we encounter this Man of Sorrows, now risen. When we suffer, we are the privileged members of Christ’s Body, the Church: “with him, if you wish, you are saving the world.”