'I thirst': What the crucified Jesus drank before he died — and why 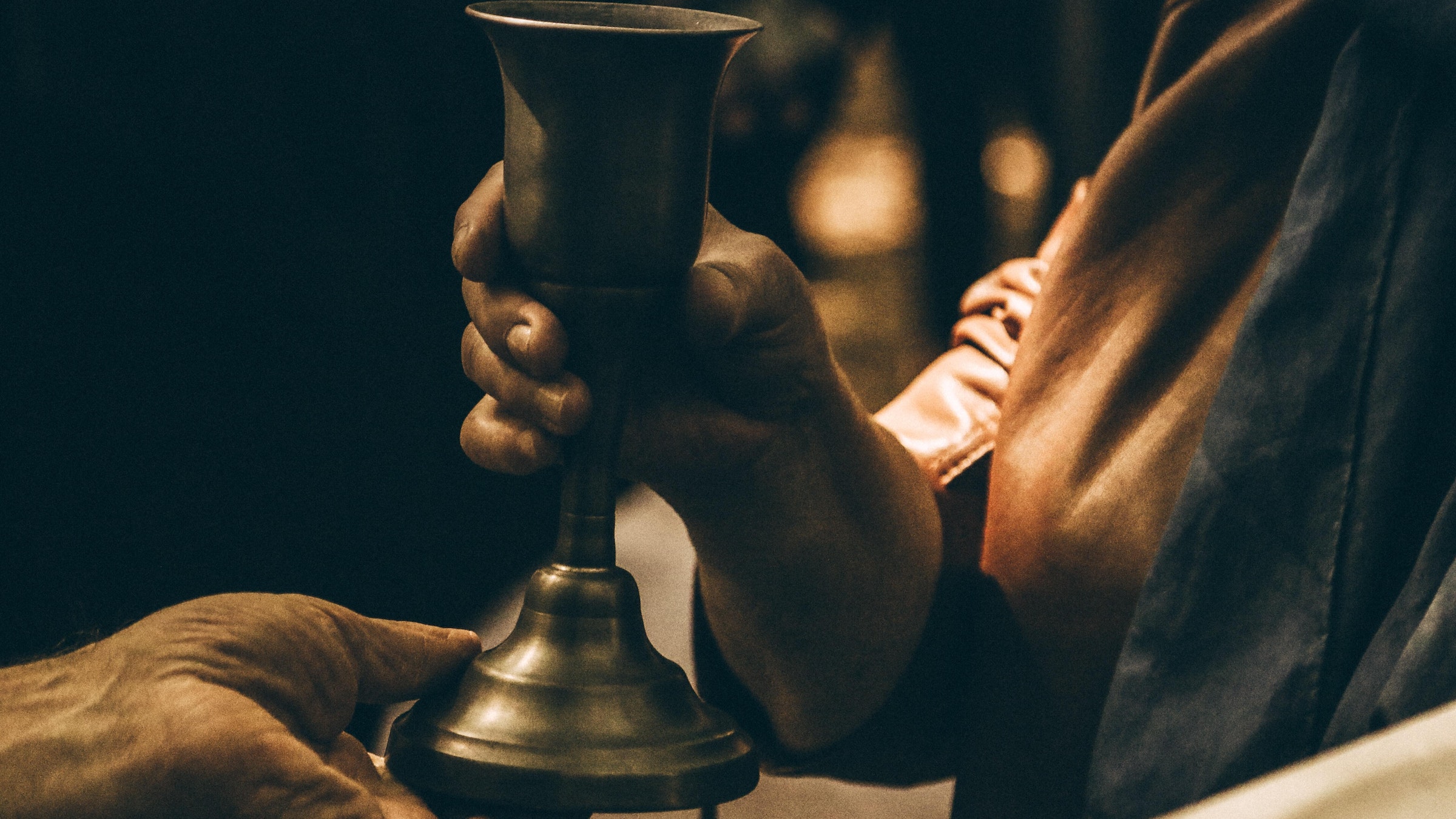 At sunrise on a beautifully warm spring morning in April, the heavy beams of the wooden gates set in Jerusalem’s thick stone walls were swung open to let families stream up the hill and into the city. Laughing and singing, each family brought a special white, fleecy lamb.

Tens of thousands of lambs were to be slaughtered that day in the holy Temple of God. Certain parts of each lamb would be cut out and burned on the great Altar of Holocausts, sacrificial offerings to God. The rest of the lambs’ carcasses would be returned, to be roasted and eaten that evening, in celebration of the great national celebration of freedom.

For this was Passover, the eight-day-long festival recalling how the Angel of Death passed over the Hebrew dwellings marked with the blood of a lamb to smite the firstborn of the land of Egypt. And the mighty hand of God delivered the Twelve Tribes from slavery in Egypt.

Come the late morning, another procession was wending its way out of the city. Following a mounted centurion, two squads of Roman legionnaires surrounded two beaten, stumbling malefactors dragging crosses. A third squad accompanied a bystander pressed into service to help carry the cross of a third prisoner in a worse condition than the other two.

The decurion of each squad bore a lance from which hung a board covered with white gesso to be hung on each cross. This was the titulus damnationis, the death warrant. Written in Hebrew, Greek and Latin, it displayed the name of the criminal and his crime. The prefect of Judæa, Pontius Pilatus, would send a record to Rome of these executions, along with other official actions, to be entered into the annals of the Imperial provinces.

A legionnaire in each squad bore a wide, woven basket with handles, folded over a number of five-inch-long, squared iron spikes; an iron-headed hammer and a pair of pliers; as welk as a heavy iron bar, about three feet in length.

Another soldier carried a thick leather bucket filled with posca, a mixture of vinegar cut with water, mixed with beaten eggs, honey or coriander seeds. In each pail a sponge soaked from which the soldiers would drink. For five centuries, posca had been humble refreshment for plebeians and the usual beverage of the army. As an energy drink, posca is better than Gatorade and, quite astonishingly, various recipes for its making may be found on the Internet.

The squads’ destination was not far past the gates. Outside the wall, rising a few feet above the dusty roadway, was a broad, smooth, gray, cranial-shaped rock. In fact, it was called Golgotha by the locals, a name meaning “Skull Place.” At its foot, a number of highborn ladies waited.

Years before, a custom had begun among the women of the great families of Jerusalem to offer the condemned a drink before their torments. Proverbs 31:6, 7 was the incentive for this charitable action: “Give strong drink to the one who is perishing, and wine to those in bitter distress; let them drink and forget their poverty and remember their misery no more.”

In Luke 23:28, seeing their sorrow, Jesus called out to the women, “Daughters of Jerusalem, do not weep for Me; weep for yourselves and for your children.” According to Matthew 27:34, the drink they offered Jesus and the others slated to die was “sour wine mixed with gall.” In other words, vinegar. “Gall” is a substance made from plants with a bitter flavor, such as wormwood or myrrh. The mixture was a mild sedative and was reputed to numb the senses.

In Hosea 10:4, the prophet equates gall to hemlock. Mark 15:23, however, specifies that the potion was sour wine mixed with myrrh: “but when He had tasted it, He would not drink.” Jesus refused to let anything get between Him and full reparation for the immoral filth and spiritual squalor so many millions have wallowed in and would in future continue to prefer.

Dr. Frederick Zugibe, an award-winning physician and Ph.D., devoted himself to studying the physiology of Roman crucifixion and the traumatic shocks endured by Christ (Readers are invited to visit Dr. Zugibe's website: Crucifixion and Shroud Studies).

As described by St. Luke, another physician, severe mental anguish was exhibited by Our Lord in the Garden of Gethsemane. It resulted in a minor loss in blood volume both from sweating and by hematidrosis, viz., the phenomenon of blood seeping through the skin, causing the nerves in the skin to become more sensitive to pain.

Scourging the back, chest and legs with the Roman flagrum certainly caused Jesus traumatic shock. The instrument’s two or three leather straps with small leaden balls attached to the ends penetrated the skin, causing trauma to nerves and muscles. It became the source of unrelenting pain and hypovolemia (fluid loss).

The irritation of the trigeminal and greater occipital nerves of the scalp triggered by the thorn-studded crown, together with the roughly hewn crossbar scraping His shoulders, would also contribute to Jesus’ traumatic shock. Falling under the block of wood caused fluid to drain into His chest.

On the cross, a loss of blood aided the progression of pleural effusion and increased hypovolemia. The pressure of the weight of the body pulling against spikes driven through hands and feet caused cramping in the muscles of arms and legs. Each movement brought on a wave of excruciating agony.

The excessive sweating induced by the ongoing trauma and by the hot sun beating down on the Crucified increased hypovolemic shock. The need for liquid refreshment became extreme.

Men screamed with pain as they were crucified, but that stage passed. As the body’s fluids drained, hypovolemia severely dried out membranes of the mouth and throat. As Psalm 22:15 puts it, “My mouth is dried up like a potsherd, and my tongue sticks to the roof of my mouth; you lay me in the dust of death.”

So also with Jesus. After all the torture He endured, even before hanging on the cross for three or four hours, by three o’clock He found it difficult to speak.

“After this Jesus, knowing that all things were now accomplished, that the Scripture might be fulfilled, said, ‘I thirst.’ Now there was standing there a vessel full of common wine; and having put a sponge soaked with the wine on a stalk of hyssop, they put it to his mouth” (John 19:28, 29). St. John wrote this in the mid-90s, with the first three Gospels before him. John aimed to show that Jesus was completely in charge of events.

Luke 23: 36, 37 agrees with John: “The soldiers also mocked Him, coming to Him and offering Him common wine and saying, ‘If Thou art the King of the Jews, save Thyself!’" The “someone” of Matthew and Mark is, therefore, a soldier and, thus, reference to “common wine” (vinus vulgus) must mean posca.

St. John was simply correcting the order of these events.

Having refreshed His mouth and throat, Jesus was now physically able to “cry out, ‘My God, My God, why hast Thou forsaken Me,'” as Matthew 27:46-50 and Mark 15:34-37 report. This was the first line of Psalm 22, which Jesus recited for the benefit of the crowd, well-versed in the psalms, who were made aware that Psalm 22, a veritable blueprint of what had taken place that afternoon, was now fulfilled, “knowing,” as St. John pointed out, “that all things were now accomplished, that the Scripture might be fulfilled.”

Jesus, “cried out with a laud voice,” as Mark 15:37 reports. John 19:30 tells readers that Jesus yelled, “It is accomplished!” And Luke 23:46 reports that, again, “Jesus cried out in a loud voice, ‘Father, into Thy hands I commend My spirit.” Only then did Jesus “breathe His last.”

Crucifixion victims died, not with a shout, but with a whimper. Making all things new, Jesus of Nazareth reversed that formula to prove that He was in charge of His own death.

And of His own resurrection.