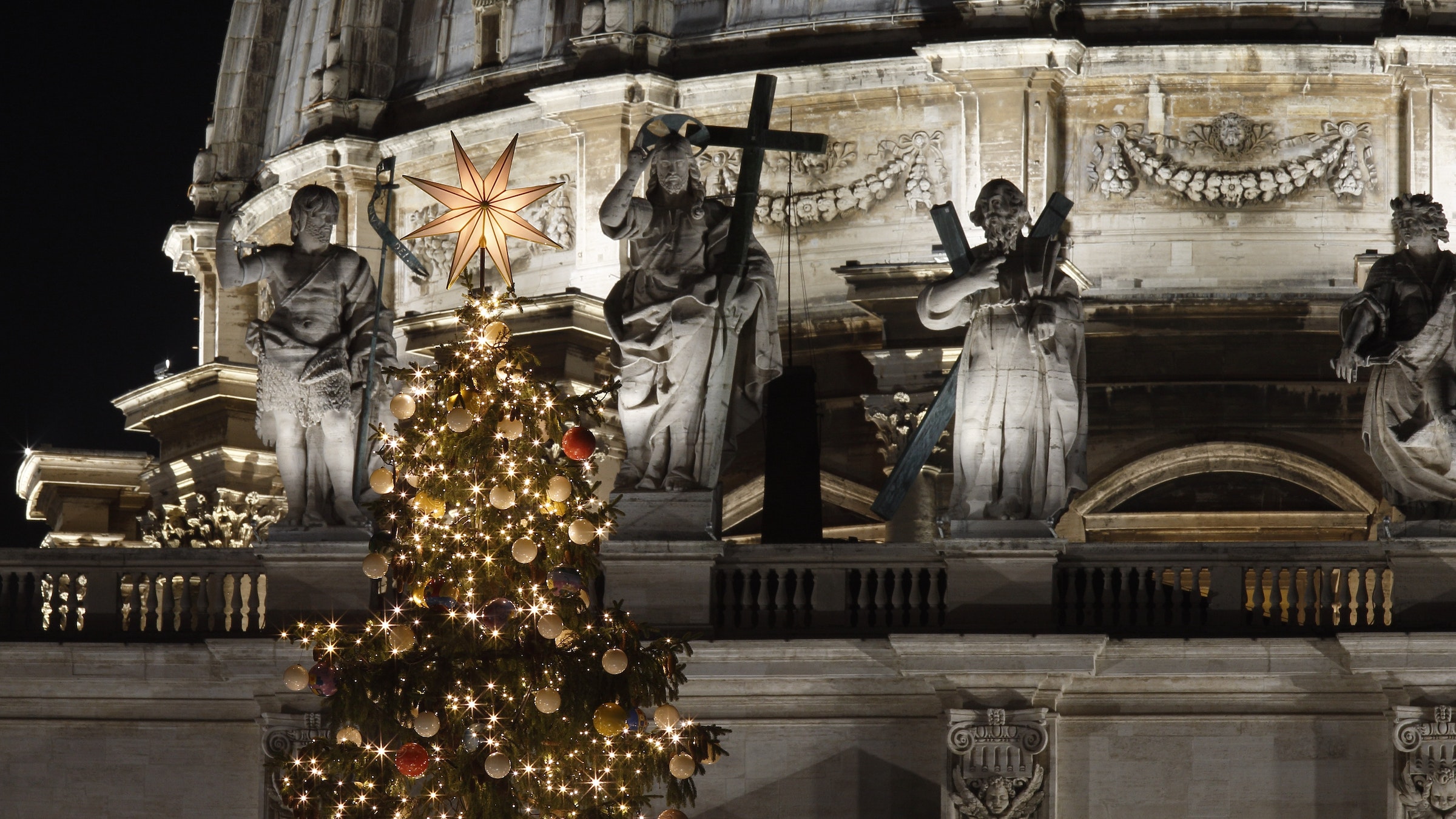 The Christmas tree and statues of Jesus and saints on the facade of St. Peter's Basilica are seen after a tree lighting ceremony at the Vatican in 2016. (CNS photo/Paul Haring)

A little less than a quarter century later, during the Franco-Prussian War, there was a lull in a battle being fought between French and German forces. The battle was being fought as Christmas Day approached, and a French soldier decided to risk his life to honor the holiday. He leapt up out of his trench, making himself an easy target for the German soldiers, and began to sing “Cantique de Noël.”

No one fired at him. On the contrary, hearing the Christmas carol moved the Germans so much that one of their soldiers stood up and sang a German carol. Both armies ended-up observing a 24-hour Christmas truce.

A bold yet simple act of faith had brought Christmas peace to that theater of war.

Some years later, “Cantique de Noël” would be translated into English and brought to the United States. We know the carol today as “O Holy Night.” In 1906, it became the first song ever broadcast on radio.

“O Holy Night!
The stars are brightly shining
It is the night of the dear Savior's birth!”

The image of light and darkness is essential to our understanding of Christmas. “The people who walked in darkness have seen a great light,” the Prophet Isaiah tells us (9:1). The priest Zecheriah, father of John the Baptist, prophesies that “In the tender compassion of our God, the dawn from on high shall break upon us, to shine on those who dwell in darkness and the shadow of death, and to guide our feet into the way of peace” (Luke 1:78-79).

To look upon the Christ Child in the manger is to see the new life God offers us, His children. To know Jesus is to know yourself.

“Long lay the world in sin and error pining”

It does not come naturally for us to say that to know Jesus is to know ourselves. It is only by God’s grace that it is possible for us to become like Jesus. It is one of the most ancient teachings of the Catholic Faith that God has become human so that humans could become divine.

We were anything but divine when God came among us as Emmanuel. Humanity was scarred by the Original Sin of our first parents. And this legacy of sin was and is ratified countless times in the personal sins of individual men, women, and children down through the ages.

I must recognize my own sin and my own need of a savior if Christmas is going to have its intended effect in my life. I need to see the sickness of my soul in all its ugliness, and to look all-the-more eagerly for the only One Who can cure me.

“Till he appear'd and the soul felt its worth.”

The Old Testament teaches us that no one can look at God and live. God is too holy, too different from us, too great and too much beyond us for us to see Him in His divine nature. So, in His love for us Jesus comes to us as “the image of the invisible God,” St. Paul tells us (Colossians 1:15). He makes it possible for us to draw near to God, to see Him and hear Him.

We can be close to God because He has come close to us. And He is with us to save us. The names Emmanuel (“God is with us”) and Jesus (“God saves”) are intrinsically and inextricably linked together. Again, Isaiah prophesies (9:5):

“For a child is born to us, a son is given us;
upon his shoulder dominion rests.
They name him Wonder-Counselor, God-Hero,
Father-Forever, Prince of Peace.”

St. Paul makes the connection between the appearance of the Christ Child and the human soul discovering its worth in his Letter to Titus (2:11-14):

“The grace of God has appeared, saving all
and training us to reject godless ways and worldly desires
and to live temperately, justly, and devoutly in this age,
as we await the blessed hope,
the appearance of the glory of our great God
and savior Jesus Christ, who gave himself for us to deliver us from all lawlessness
and to cleanse for himself a people as his own,
eager to do what is good.”

“A thrill of hope the weary soul rejoices
For yonder breaks a new and glorious morn!”

Usually, when we speak of hope we express uncertainty. We wish for something, but not necessarily with any confidence. “I hope I win the lottery,” is a typical way of speaking of hope.

But the “thrill of hope” the song names is certain. It is about seeing Jesus and knowing that with Him things are different for me, for other people, and especially for our future. We have a new identity, a new mission in life, and a new destiny. As God reveals through the Prophet Isaiah (9:1-3):

“The people who walked in darkness
have seen a great light;
upon those who dwelt in the land of gloom
a light has shone.
You have brought them abundant joy
and great rejoicing,

For the yoke that burdened them,
the pole on their shoulder,
and the rod of their taskmaster
you have smashed.”

Our slavery to sin is ended. We are free, truly free. And the freedom God gives us to know Him, to do His will, and to achieve the destiny He has prepared for us and that He has prepared us for is a most tremendous Christmas gift.

Blessed Solanus Casey tells us that “Gratitude is the first sign of a thinking, rational creature.” The word “Eucharist” means “thanksgiving,” and so there is nothing better we could do to celebrate the Birth of Jesus than to “fall on our knees" at Holy Mass, where Jesus becomes as present to us on the altars of our parish churches as He was in the manger at Bethlehem.

What a blessing it is for us to be together at Christmas Mass and to join the angels in singing, “Glory to God in the highest and on earth peace to those on whom his favor rests” (Luke 2:14), and “Holy, holy, holy, Lord God of hosts. Blessed is he who comes in the name of the Lord.” 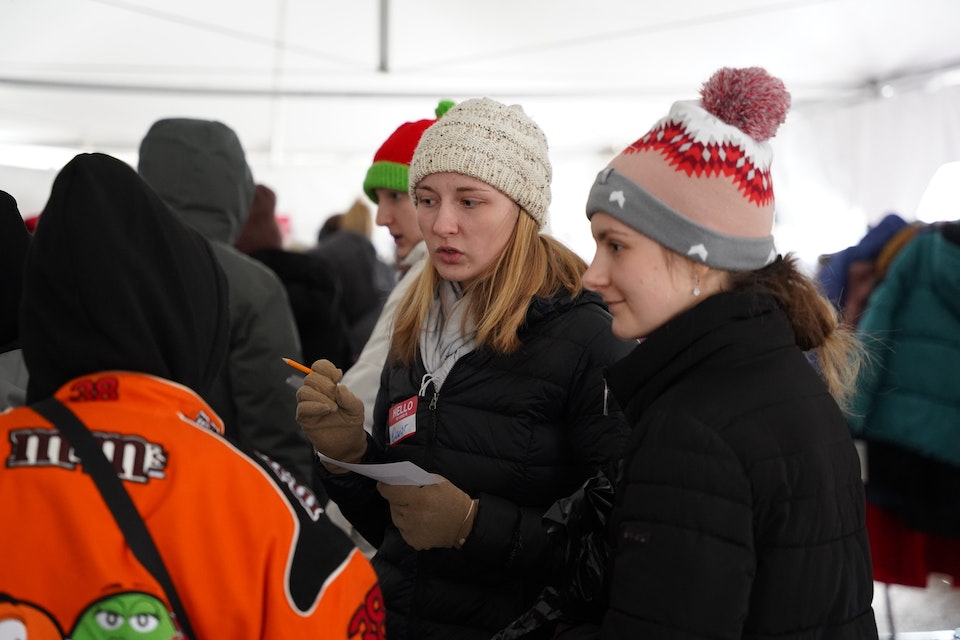 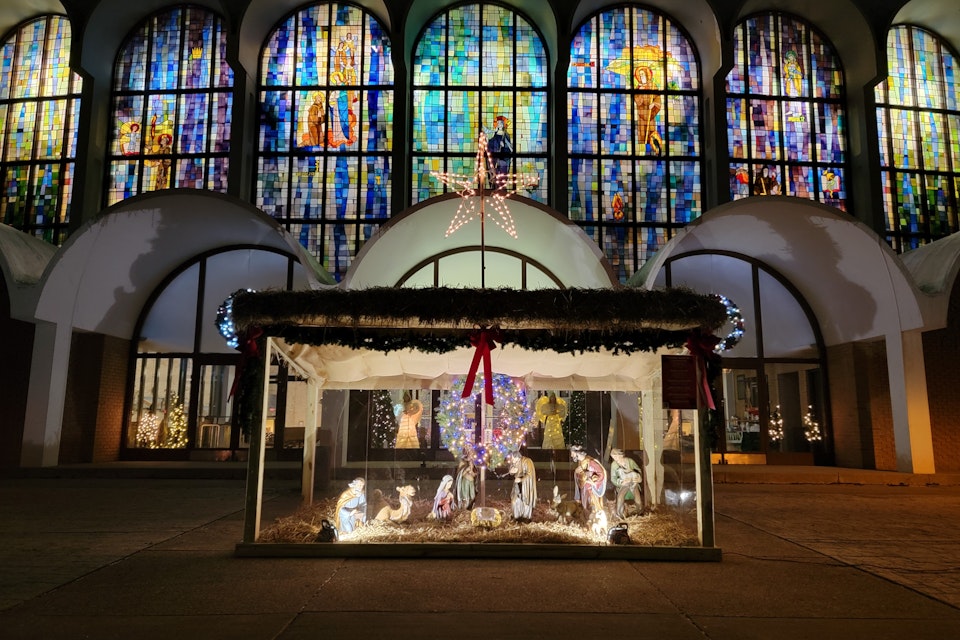