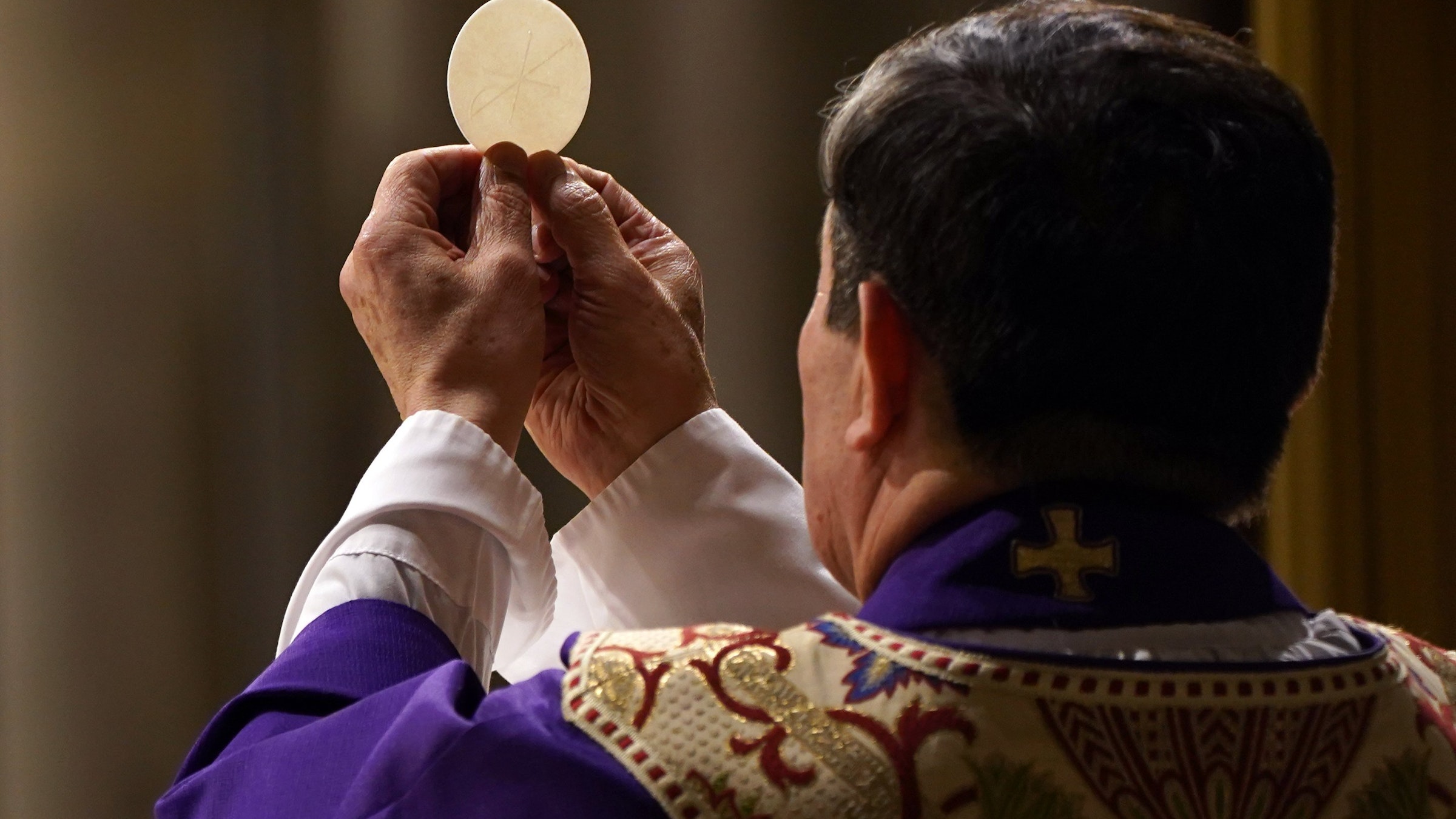 A priest elevates the host during a Mass at St. Patrick's Cathedral in New York City in 2020. (CNS photo/Gregory A. Shemitz)

Maurice de Sully had been an energetic bishop of Paris. He conceived of and began construction of the beautiful Cathedral de Notre Dame. Pope Alexander III came to Paris to lay its cornerstone in 1163.

During his final illness, in 1196, the bishop found it next to impossible to swallow so he was unable to receive Holy Viaticum. As an alternative, he had a ciborium containing the Most Blessed Sacrament brought to his bedroom so that the Lord would be near him, meditating on his Savior’s love while preparing to meet Him.

Around 1175 two respected theologians of the University of Paris, Peter Comestor and Peter the Chanter, agreed on a liturgical novelty: that, at Mass, transubstantiation of the bread into the Most Holy Body of Jesus does not occur until after the priest has pronounced the words of consecration over the chalice as well, when wine becomes the Most Precious Blood of Our Lord.

Now, theorizing that this might be true is not wrong. As theologian E Edward Zinke writes:

The purpose of theology is to determine and express through the use of reason illuminated by faith the meaning and significance of the supernatural knowledge of God given in Scripture in order to reconstruct in a rational and human way the truth which God has been pleased to give in Scripture.

Theological musings and suppositions, however, must always be given to the Church to decide what is true. Origen, for instance, the great theologian of the 200s, made several erroneous suppositions, most notably about universal salvation. In his humility, however, Origen never insisted that his deductions were correct until, having placed his theories at the disposal of the Church, the Church made a decision.

Maurice’s successor as bishop of Paris, Eudes de Sully (1197-1208), acted to end growing acceptance of this error. Calling a local synod, Bishop de Sully commanded his priests, after pronouncing the words of Consecration, to raise the Sacred Host high over their heads so that everyone might see and adore. The Elevation of the Most Precious Blood would follow some decades later.

Another of the instructors in Paris, Stephen Langton of England, was later named Cardinal-Archbishop of Canterbury and Primate of England (1207-1228). He called a provincial synod in 1214 wherein he, too, instructed his priests, as a practical protest against the teaching of the two theologians, “the Sacred Host should be elevated immediately after the words of Consecration so that it can be seen by all."

In 1907, St. Pius X, “the pope of the Blessed Sacrament,” granted a partial indulgence “to all the faithful, who, looking with faith, devotion, and love at the Sacred Host at the moment of the Elevation, say at the same time, the words, 'My Lord and My God.'” A plenary indulgence may be gained once each week by those who, having attended Mass daily, also receive Holy Communion. The same partial indulgence may also be gained by looking devoutly upon the Blessed Sacrament, whenever it is solemnly exposed, saying the aforementioned words.

Sean M. Wright, MA, Emmy-nominated television writer and a Master Catechist for the Archdiocese of Los Angeles, responds to comments sent him at [email protected]