Where do we go next after Proposal 3? Make abortion unthinkable 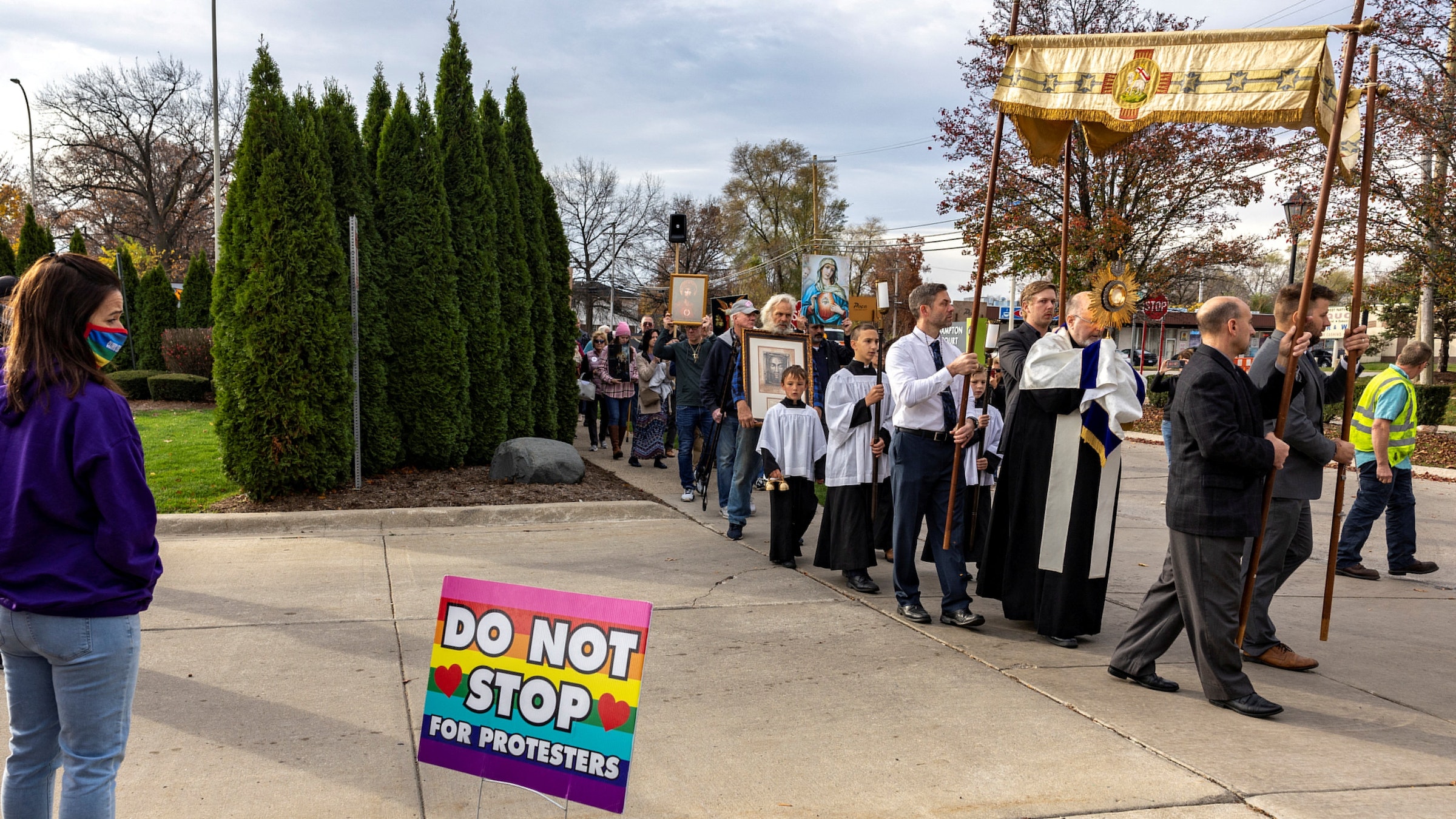 An abortion clinic escort watches a Catholic procession pass Northland Family Planning in Westland, Mich., Nov. 5, 2022, to demonstrate against a ballot measure known as Proposal 3, which would codify a right to abortion. (CNS photo/Evelyn Hockstein, Reuters)

Just months after the country was freed from a nationwide, constitutionally protected right to abortion, Michigan has become a state that now protects abortion as a right in its constitution as result of the passage of Proposal 3 by voters.

Fifty years of prayer, advocacy, and action, all undone — and then some — in a single Michigan election.

That the intentional act to kill an unborn child is now enshrined in our state constitution as a fundamental right is a tragic consequence triggered by the political backlash from the overturn of Roe v. Wade. Anger and fear drove many to this November’s ballot, some believing that approving Proposal 3 was the best way to protect abortion access in the face of a still-dormant and now-overturned state law prohibiting abortion.

As a result, the Michigan Constitution now protects abortion at essentially any stage of pregnancy. The amendment will most likely trigger the end of several protections enacted throughout the decades aimed at protecting women and making abortion as safe as possible. Proponents of Proposal 3 had said they only intended to end the 1931 abortion ban, though we know that is not truthful.

The passage of Proposal 3 and all it entails is a massive hurdle to securing legal protection for the unborn in Michigan, a significant component of the broader Gospel mission to uphold and protect the dignity of all human life, beginning with conception and ending at natural death.

But the approval of Proposal 3 does not have to inhibit another aspect of that mission: Making abortion unthinkable by aiding women and families with the support they need in difficult pregnancies.

The Church has and must continue to make radical support for mothers and families its focus. Thankfully, that focus is taking hold at all levels of the Church, including from the U.S. Conference of Catholic Bishops, which as recently as last month urged all members of Congress to join in "radical solidarity" with "mothers, babies (born and preborn) and families throughout each person’s entire lifespan."

This emphasis on walking with moms in need — which is also the namesake of the USCCB-initiated movement to empower parishes to support vulnerable women — is crucial toward achieving the goal of the pro-life movement in two ways.

One, this approach aims at addressing the root causes of why women seek abortion. The men and women who work in Catholic Charities and related ministries know these causes firsthand. They know the stories of mothers who are considering abortion because they lack family support, housing, food, clothing and shelter or some other material need.

When women do not have or are unable to find support, abortion seems like the best way out. If our Church — and the broader society — understands this and works to create a safety net of material and emotional care, abortion does not have to be an option — in other words, unthinkable, even if it is legal.

Second, walking with moms in need folds into the broader goal of affirming the dignity of all human life by specifically lifting up the life of the mother.

Ensuring that mothers who bring children into the world have what they need to accomplish this great task is paramount to upholding their dignity. It is part of the vision of being pro-life through all of life. Affirming the dignity of all mothers also means working to provide access to the health care she needs before, during and after pregnancy to safely bring her baby to term and to thrive as a mother postpartum and beyond.

Women should not have to feel like abortion is their best option to protect their lives in risky pregnancies. Pro-life supporters need to make clear that we do not believe mothers have to sacrifice their very life just to protect the unborn. Part of this work is to educate and correct misunderstandings about how women can receive life-saving care and treatment without having to resort to abortion.

Most would agree that most women do not want to have an abortion. Yet we live in a culture and society that sees abortion as a necessary option for resolving a difficult scenario. The lifelong mental and emotional realities are almost never part of the conversation. Nor is the peace that comes with knowing an adopted or safely surrendered baby is alive and well.

The entire abortion landscape just changed, literally overnight. We must respond. As legal protections for the unborn are not realistic in the near term in our state, vision, courage, and leadership are thus necessary to anticipate and build the framework for a pro-life culture that supports women and families through sound public policies. That would be our task regardless of the outcome of the election, but it becomes more crucial with the approval of Proposal 3.

The work to uphold human life at all stages is never over. Direct threats to life, such as abortion, cannot be acceptable in a civil and just society. At the same time, expecting mothers to carry babies to term without the care, compassion, and resources needed is also not acceptable in the face of the call to truly uphold the dignity of all human life.

These two important interests — the life of the mother and the child — are not mutually exclusive where one is pitted against the other; it must always be a both/and reality.

Let us move forward in hope and love, striving to always practice what we preach, to truly walk with mothers in need, and show a skeptical world that the Church is committed to caring for and protecting all human life, including women in difficult pregnancies.