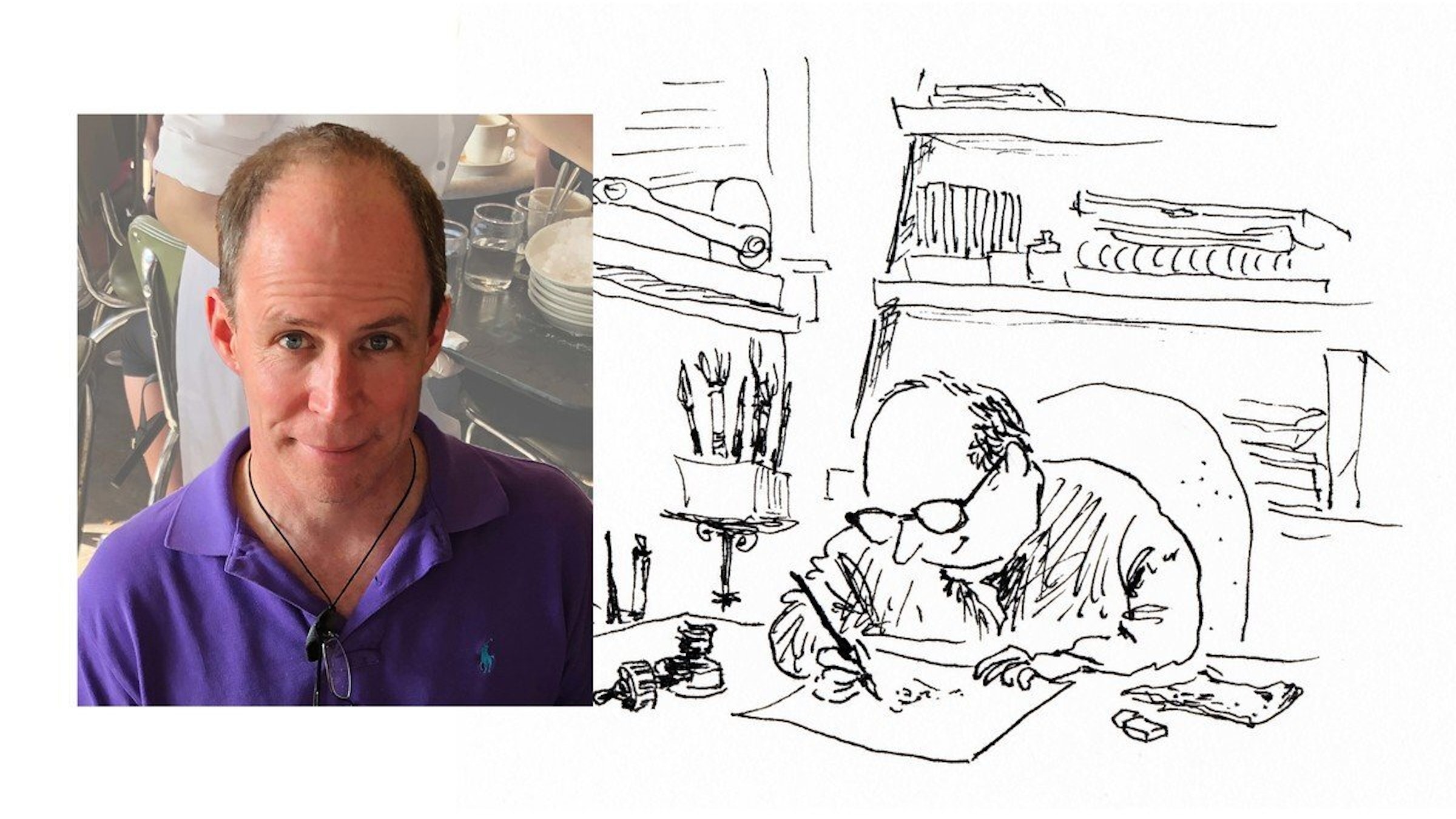 New Yorker cartoonist Pat Byrnes, the younger brother of Detroit native and current Guam Archbishop Michael J. Byrnes, is depicted in a “selfie” he drew at Detroit Catholic’s request. Born and raised in an Irish-Catholic family in Detroit, Byrnes is now a renowned cartoonist who has been published in The Washington Post and The New Yorker. (Illustration by Pat Byrnes | Special to Detroit Catholic)

From Detroit Catholic Central High School to the pages of The New Yorker, Pat Byrnes’ cartoons emphasize the lighter side of life

DETROIT — If you ask cartoonist Pat Byrnes, the best comeback in history is in the Bible and was brought to us by cartooning. The Pharisees tried setting a trap for Jesus, to which he responds by drawing in the sand.

Born and raised in an Irish-Catholic family in Detroit, Byrnes is now a renowned cartoonist who has been published in The Washington Post and The New Yorker, among other places.

Byrnes, the brother of Archbishop Michael J. Byrnes –– current archbishop of Agaña, Guam, and a former Detroit auxiliary bishop –– said he has been cartooning for as long as he can remember.

“It is a genetic condition,” Byrnes quipped in an interview with Detroit Catholic. “I remember in junior high, we were trying to make a neighborhood newspaper, and I was agitating for this because it was a place to do cartoons. I would read joke books and basically try to take a joke that I found funny and say, ‘Oh, I can make this into a cartoon.’” 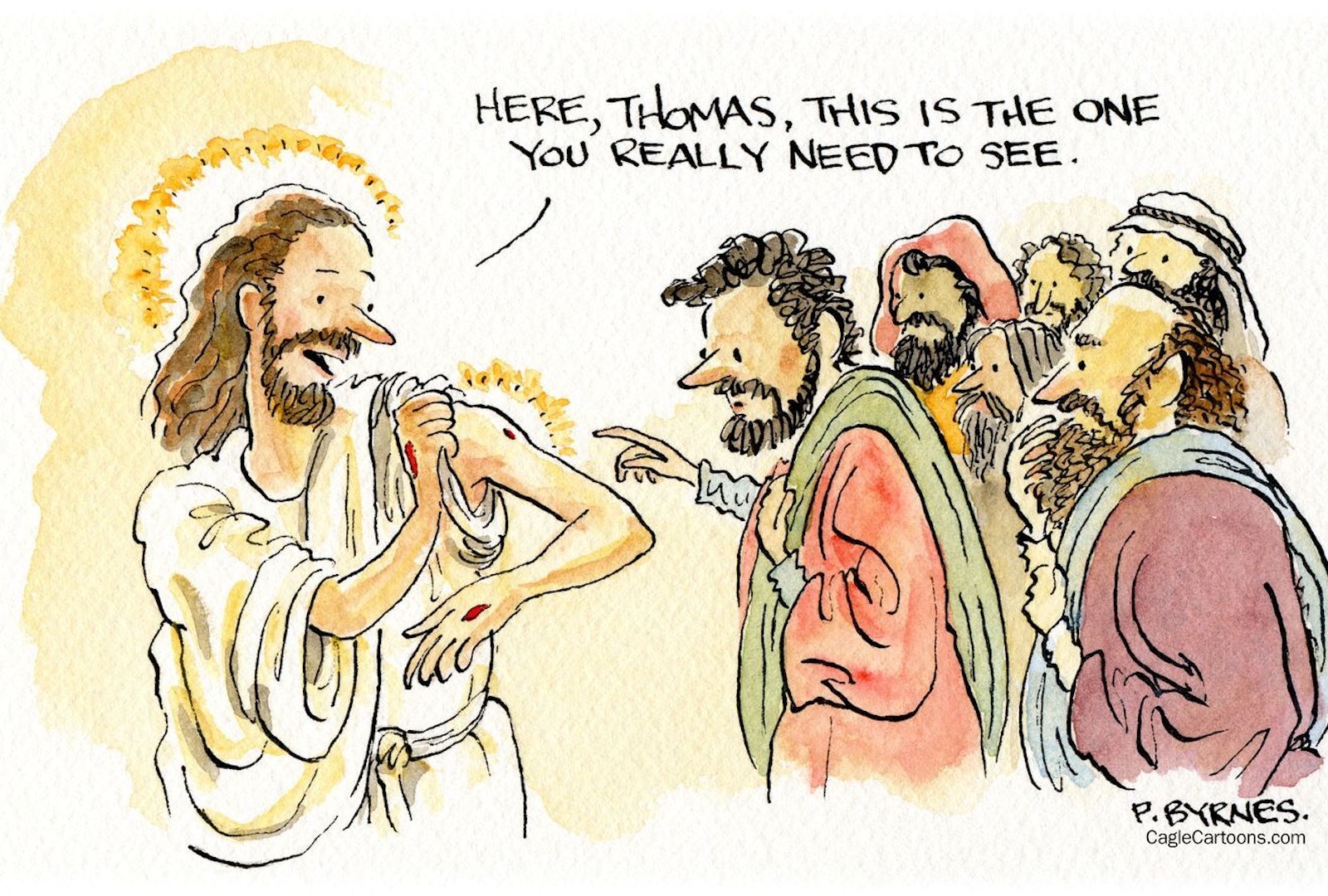 One of Byrnes’ recent cartoons, “Vaccine Hesitant Thomas,” is pictured. While Byrnes’ cartoons often invoke religious — and sometimes political — themes, his aim is to provoke thought and conversation using metaphors and humor.

Byrnes would practice distilling the jokes down to one line. They were often awful, he said, but he did it for the love of learning.

The Byrnes brothers spent their formative years in Detroit, attending St. Mary of Redford Parish in Detroit and attending Detroit Catholic Central High School. In school, the brothers took Latin together. A fellow student glanced over at Byrnes and caught him doodling and invited him to join the school newspaper as the cartoonist.

“That was a big step for me, to make the high school paper,” Byrnes said. “It was a chance to see stuff in print, and that’s when you really start to reap the benefits of an Irish Catholic upbringing because shame is a powerful motivator,” Byrnes joked –– tongue in cheek about his propensity to notice all the little flaws in his work.

“That is a good motivator to get better, and I realized that if I wanted to be a cartoonist –– and I didn’t know what else I wanted to be –– I would get a great benefit from that,” Byrnes said.

Byrnes had no clue how to tell his Depression-era parents that he wanted to be a cartoonist, nor did he know how to become one. However, on a campus tour of the University of Notre Dame, he found his way in. 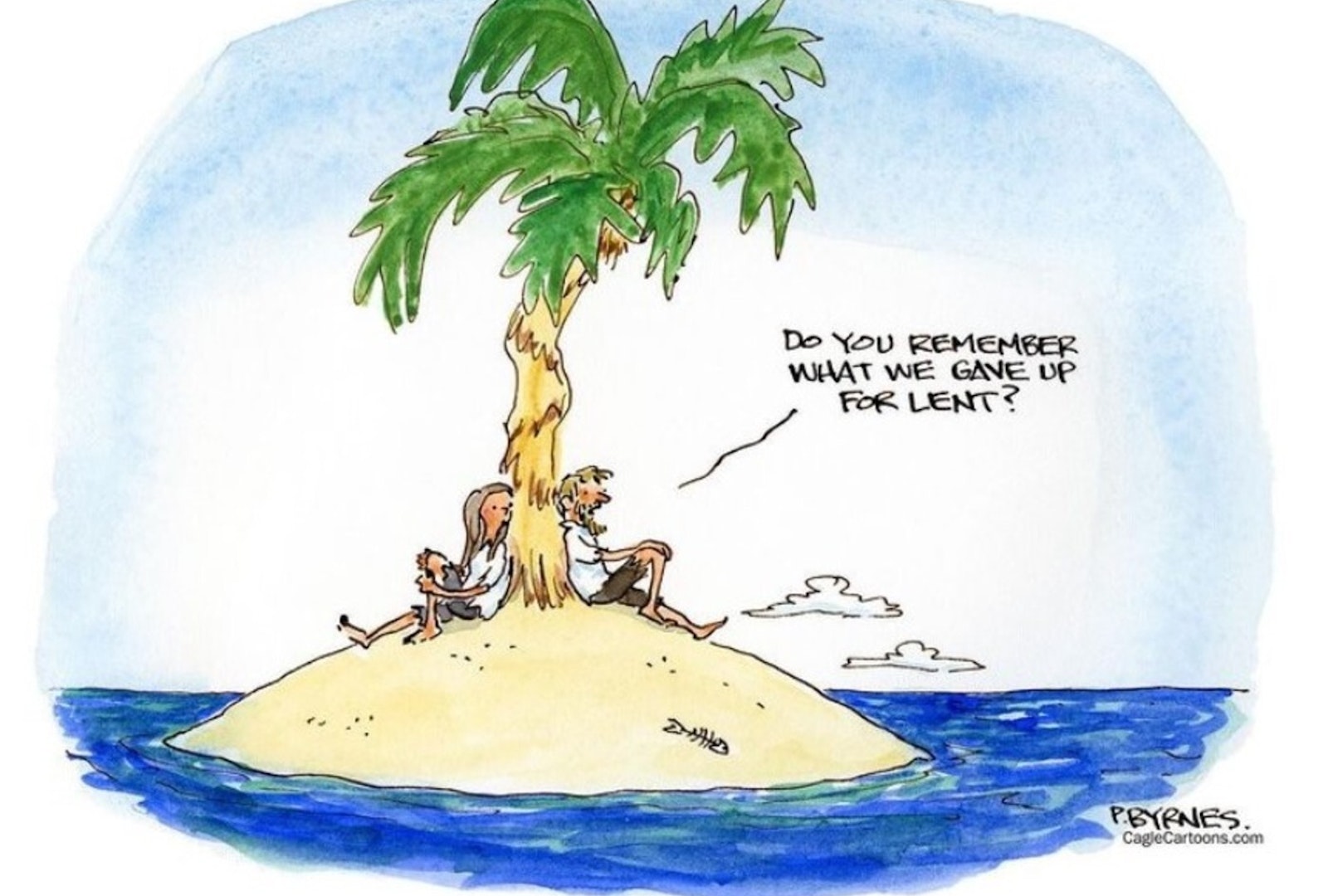 A cartoon Byrnes published earlier this year during the coronavirus pandemic.

“I went to Notre Dame because they had a student-run, daily newspaper, and that would give me an opportunity to see more (garbage) in print and be shamed into improving it,” Byrnes joked.

As a “cover” to give his parents, Byrnes decided to pursue a degree in aerospace engineering. After graduation, though, his love of cartooning hadn’t abated.

With no connections in the cartooning world, Byrnes worked for about a year as an engineer before taking the first “out” he could find, landing back in Detroit at an advertising agency. A few years later, he moved on to another advertising agency in Chicago, where he took up improv classes.

Improv led him into the “oddball comedy bar scene,” Byrnes explained, and along with a friend from his Catholic Central days, they began to perform an act spoofing old radio shows. With a history of both writing ads and doing comedy sketches under his belt, he segued into doing voice-overs for advertisements.

The voice-over work gave him an income and a job that was demanding of his schedule, “but not of my time,” Byrnes said. With the extra time, Byrnes began to draw and sketch with more frequency, slowly uncovering what would become his signature cartoon style.

“Instead of stylizing, sketching makes you go quickly, and you go back and look at your sketch that you did almost unconsciously and go, ‘Oh that is a nice way to do a hand!’ And that starts to inform you of the way you actually see things,” Byrnes said.

During the start of his career in his early 20s, Byrnes had set aside his cartooning ambitions. He said his work consisted of “dumb jokes” with no personality or point of view. He had not yet found his voice, but by his 30s, he was ready to try again. 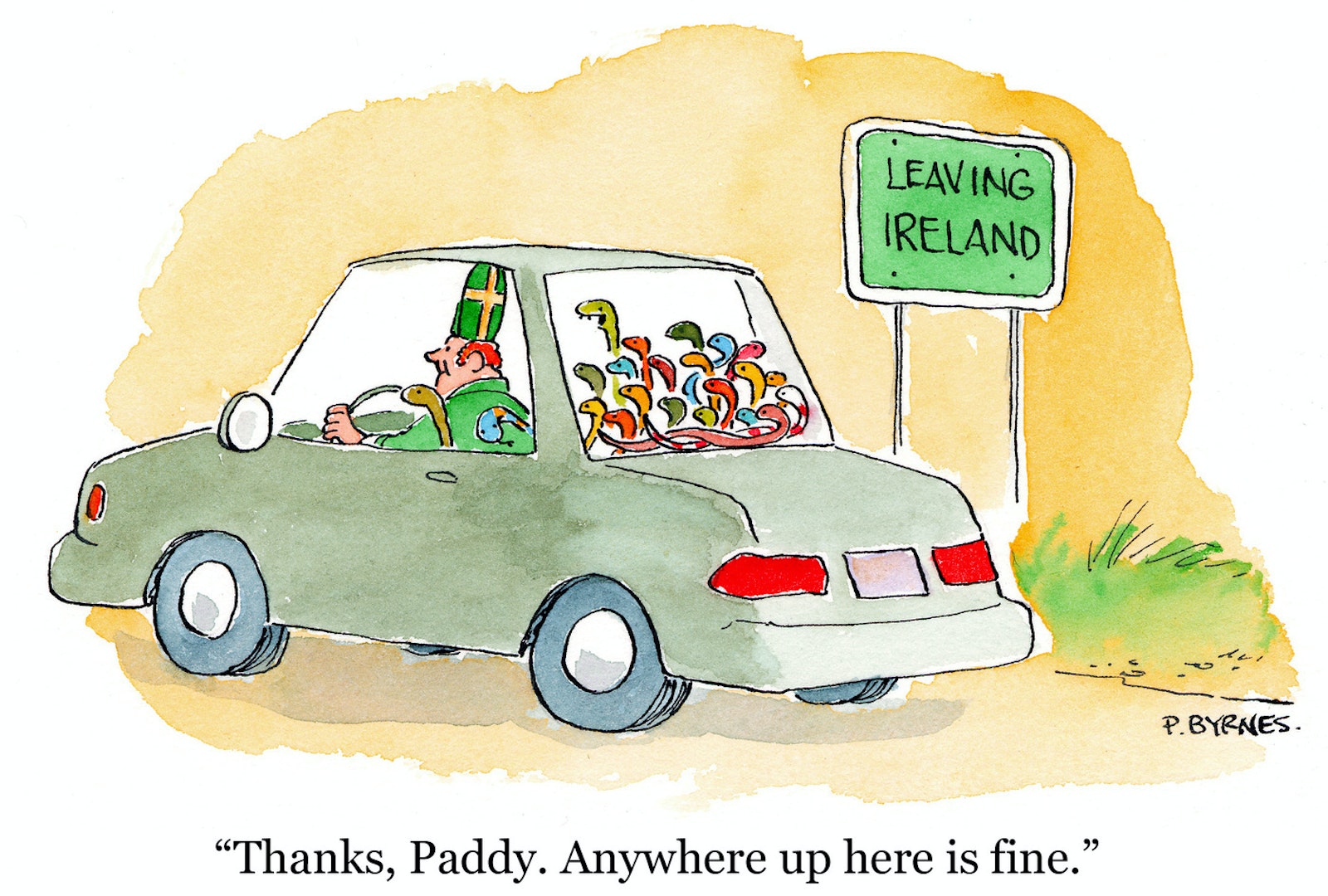 For Byrnes, cartoons are a way to communicate ideas and concepts to people in a way that breaks through preconceived, staunch beliefs because they help connect the analytical and imaginative parts of our brains, he says.

The week before his 39th birthday, Byrnes sold his first cartoon to The New Yorker. He still draws for The New Yorker (he took a break in his career to raise his young daughters) and now works for the cartoon syndicate Cagle Cartoons.

Many of his cartoons have a religious flavor, such as a recent sketch depicting “vaccine-hesitant Thomas” or an earlier cartoon showing St. Patrick driving snakes –– literally –– out of Ireland.

“Catholicism is something too deep a part of me to separate like that. It is part of me almost genetically,” Byrnes said.

For Byrnes, cartoons are a way to communicate ideas and concepts in a way that breaks through preconceived beliefs because they help connect the analytical and imaginative parts of people’s brains.

“Cartoon drawing engages empathy and activates your mirror neurons, pulls you in and helps point you to something meaningful,” Byrnes explained. “The way it usually does that is by creating a metaphor for a situation, for a feeling, for a principle –– and then it tries to resolve that with humor.”

Byrnes said humor is a way for people to create emotional distance from often unpleasant realizations. It creates a safe space to accept something that ordinarily one wouldn’t want to accept, he explained. It’s left up to the viewer to make the final connections between the drawing and the text, Byrnes said.

“If they close that gap, then they have effectively experienced what’s going on in that cartoon,” Byrnes said. “So, you’re providing a way to get through the chinks in the armor. Cartoons are remarkably powerful, and they are a tremendous way of looking at any problem.”

Byrnes said when people feel strongly about something, they often get caught in the emotions or semantics of an argument, making it a struggle to see things from someone else’s perspective.

“Cartoons, visuals, help us get around that; they help us see things and understand them more comprehensively and make greater allowances for nuance,” Byrnes said. “Cartoons do promote and engage empathy.”