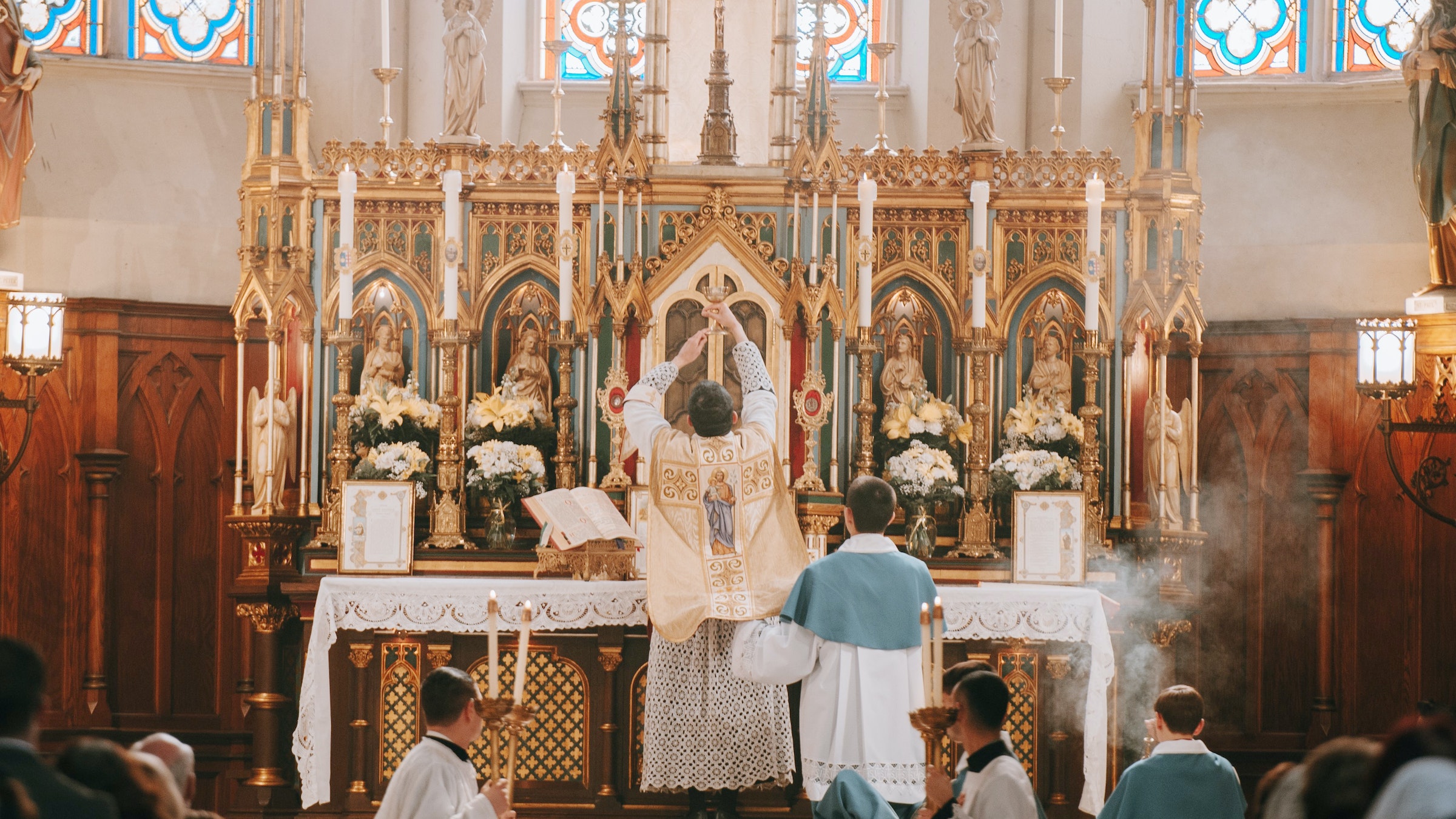 A priest celebrates the extraordinary form liturgy, commonly known as the Tridentine or traditional Latin Mass, at St. Joseph Shrine near Detroit's Eastern Market. The shrine, under the care of the Institute of Christ the King Sovereign Priest, as a personal parish in the Archdiocese of Detroit devoted to the pre-Vatican II Latin Mass, will be granted permission to continue to celebrate according to the old rite. (Photos by Melissa Moon | Detroit Catholic file photo)

DETROIT — St. Joseph Shrine Parish in Detroit may continue to offer liturgies and sacraments according to the extraordinary form of the Roman Missal, and other priests in the Archdiocese of Detroit may request special permission to do so, Archbishop Allen H. Vigneron said.

Archbishop Vigneron promulgated a new set of norms for priests and parishes in the Archdiocese of Detroit wishing to celebrate Masses and sacraments according to the 1962 Roman Missal in accordance with Pope Francis’ July 2021 apostolic letter, Traditionis custodes, which restored some limits on the use of the traditional Latin Mass in dioceses worldwide.

At the time the pope’s letter was released, Archbishop Vigneron indicated he would study the document before issuing a formal policy on its implementation in the Archdiocese of Detroit.

The new norms, announced May 6 in a letter to clergy of the Archdiocese of Detroit, will go into effect July 1.

In his decree, Archbishop Vigneron acknowledged the “great gift and the great blessing that worship using the ancient rite of the Mass has been in the Archdiocese of Detroit,” while emphasizing that its celebration may continue on a limited basis “in a spirit of unity with and obedience to the magisterium of the Church.”

This unity and obedience to the magisterium was a major reason for Pope Francis’ decision to restrict some celebration of the pre-Vatican II liturgy, which the pope worried was being used in some corners to promote “the rejection of the Church and her institutions in the name of what is called the ‘true church,’” Pope Francis wrote in the motu proprio.

While the pope expressed his “sadness” at such a situation, he also recognized the existence of many faithful Catholic groups’ devotion to the Tridentine liturgy, and the legitimate desire for unity among many groups that promote the pre-Vatican II Mass.

In response, the pope’s motu proprio allowed bishops to grant permission to some pre-existing groups and personal parishes to continue celebrating according to the old rite, while restricting the establishment of new groups or parishes for this purpose.

St. Joseph Shrine, in Detroit’s Eastern Market district, is the only personal parish in the Archdiocese of Detroit that is currently devoted to caring for the faithful according to the 1962 Roman Missal, Archbishop Vigneron said. The parish has been under the care of the Institute of Christ the King Sovereign Priest, a religious community devoted to the Tridentine liturgy, since 2016.

Priests and deacons of the institute may continue to offer such celebrations "in St. Joseph Church and other churches, oratories, and private chapels in the Archdiocese of Detroit when caring for parishioners belonging to St. Joseph Shrine Parish,” the archbishop said. 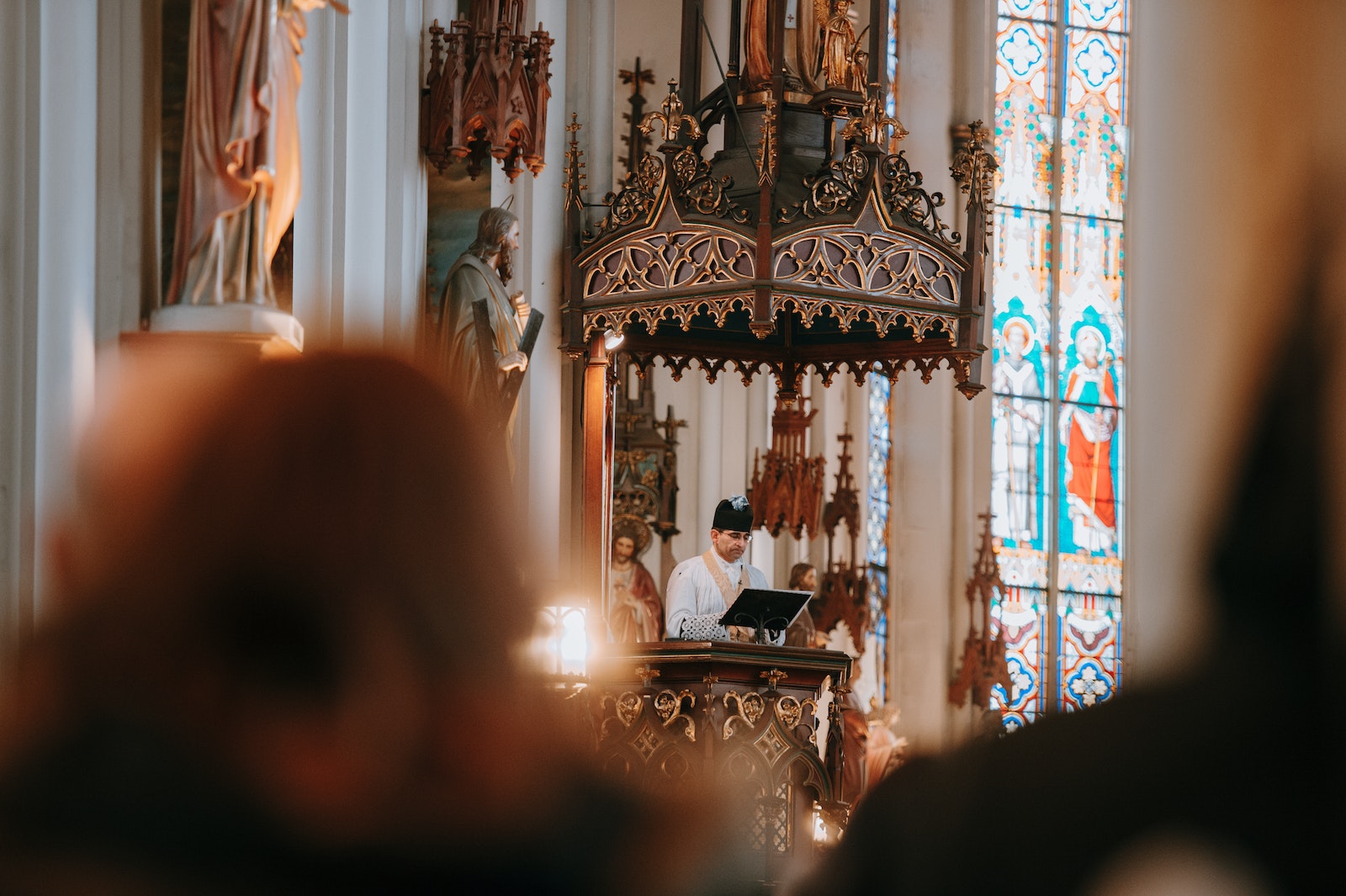 A priest proclaims the Gospel from the pulpit of St. Joseph Shrine in Detroit during a celebration of the extraordinary form Mass.

Other priests in the Archdiocese of Detroit who wish to celebrate the extraordinary form liturgy may request formal permission from the archbishop to do so under certain circumstances, according to the new norms.

Such permission would be renewed yearly, unless other arrangements are made, and each priest offering Mass according to the 1962 missal would be required to offer a statement annually to his congregation affirming the validity of the liturgical reforms of the Second Vatican Council and subsequent popes, commonly called the novus ordo ("new order") or ordinary form Mass.

In 2007, Pope Benedict XVI expanded the availability of the pre-Vatican II liturgy in his apostolic letter, Summorum pontificum, out of a desire to care for Catholics who desired the older form of the Mass. However, Pope Francis argued, such permission was never intended to rupture the Church's unity, but rather enhance it.

In view of this, the pope's reforms in Traditionis custodes don't outlaw the older form of the Mass, but rather seek to ensure such celebrations serve the greater unity Pope Benedict XVI envisioned, he said.

“This unity I intend to re-establish throughout the church of the Roman Rite,” the pope said in a letter to bishops in July 2021.

Parishes that currently host “pre-existing stable groups" wanting Mass to continue in the extraordinary form may request permission to continue such celebrations, with certain limits, the new archdiocesan guidelines said.

While ordinarily, such Masses should be held in a non-parish church, oratory or private chapel, priests may request permission to celebrate extraordinary form Masses inside a parish church if it’s not possible to do so elsewhere.

The archdiocese's guidelines also clarify that the proclamation of Scripture readings during extraordinary form Masses must be in the vernacular language, but that the 2002 Roman Missal — which outlines the celebration of the ordinary form, post-Vatican II Mass in the Latin language — may be used without restriction.

Quoting a response from the Congregation for Divine Worship and the Discipline of the Sacraments to questions about the pope’s motu proprio in December 2021, the document notes Pope Francis’ purpose in Traditionis custodes is “to re-establish in the whole Church of the Roman Rite a single and identical prayer expressing its unity, according to the liturgical books promulgated by the Popes Saint Paul VI and Saint John Paul II, in conformity with the decrees of the Second Vatican Council and in line with the tradition of the Church.”

This story has been updated.