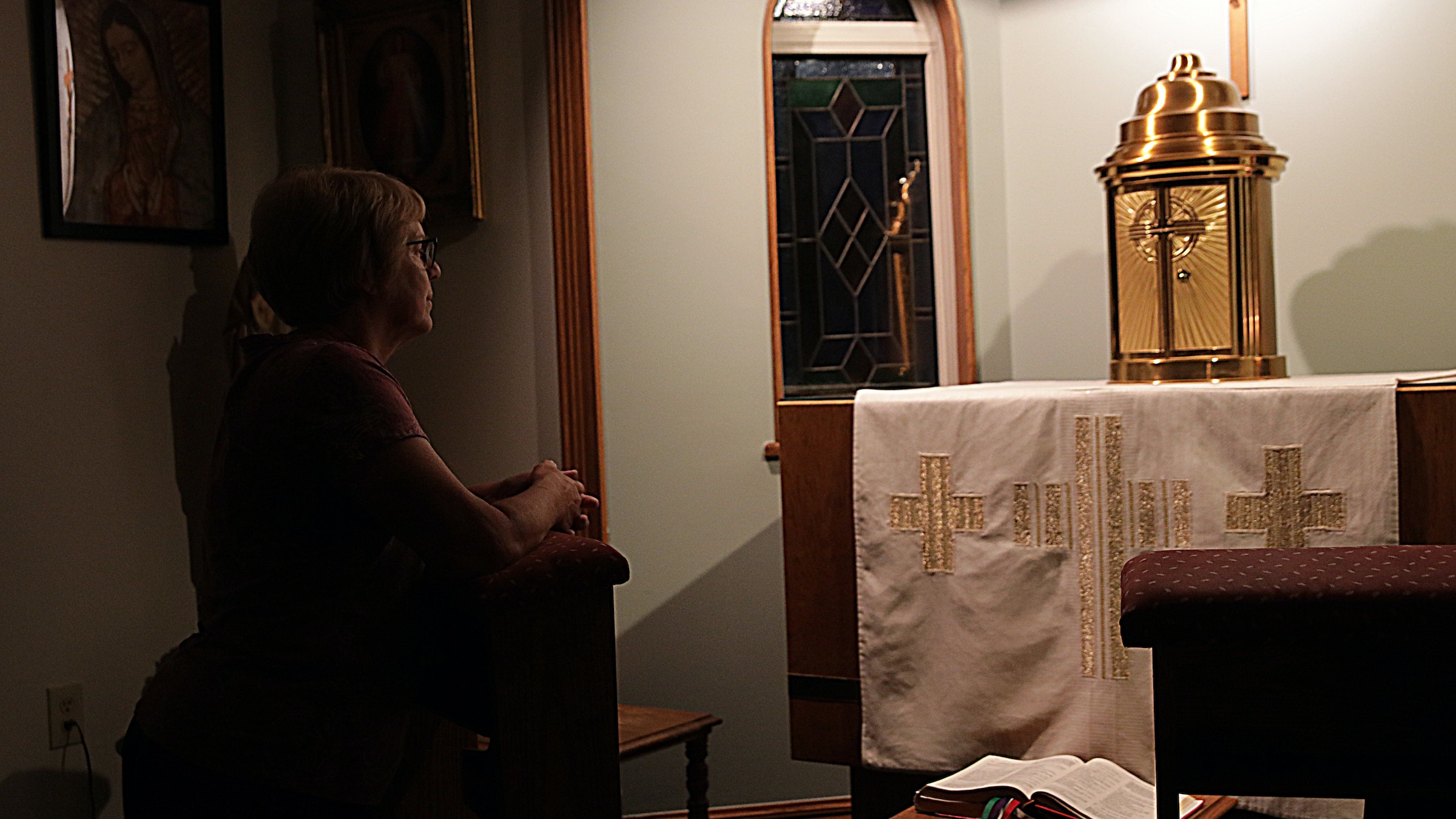 Karen Flint, who coordinates the 24/7 adoration chapel at St. Charles Borromeo Parish in Newport, prays before the Blessed Sacrament in the tabernacle at 5 a.m. Wednesday, July 27. Flint has volunteered for late-night time slots since the parish first began perpetual Eucharistic adoration in the 1980s. (Photos by Dan Meloy | Detroit Catholic)

The main parking lot lights are turned off so as not to attract the gnats that plague the Monroe County community of Newport during the summer months.

Guided by the flashlight from her cellphone, Flint navigates the steps up to the door of the parish adoration chapel, types in a code, walks into a foyer and signs her name in the schedule book. Then she walks into a room where the Lord is waiting for her.

It’s 5 a.m. on Wednesday morning, and hardly a soul is awake in town. But Flint is awake, basking in the presence of Christ in the Eucharist in the tabernacle, praying in a silence that reflects the calm of the world still awaiting dawn.

“It’s quiet, peaceful,” Flint told Detroit Catholic. “Often, I just turn the lights off, sit with a candle glowing, looking at the tabernacle or Jesus on the cross. It’s all very peaceful.”

Flint and her husband started going to Eucharistic adoration in 1989. St. Charles Borromeo Parish started adoration on the regular in 1985 at the behest of then-pastor Fr. Jack Fabian. By 1989, St. Charles Borromeo had enough people signed up to host perpetual adoration, with an adoration chapel completed on Dec. 24, 1989, and dedicated on Feb. 8, 1990. 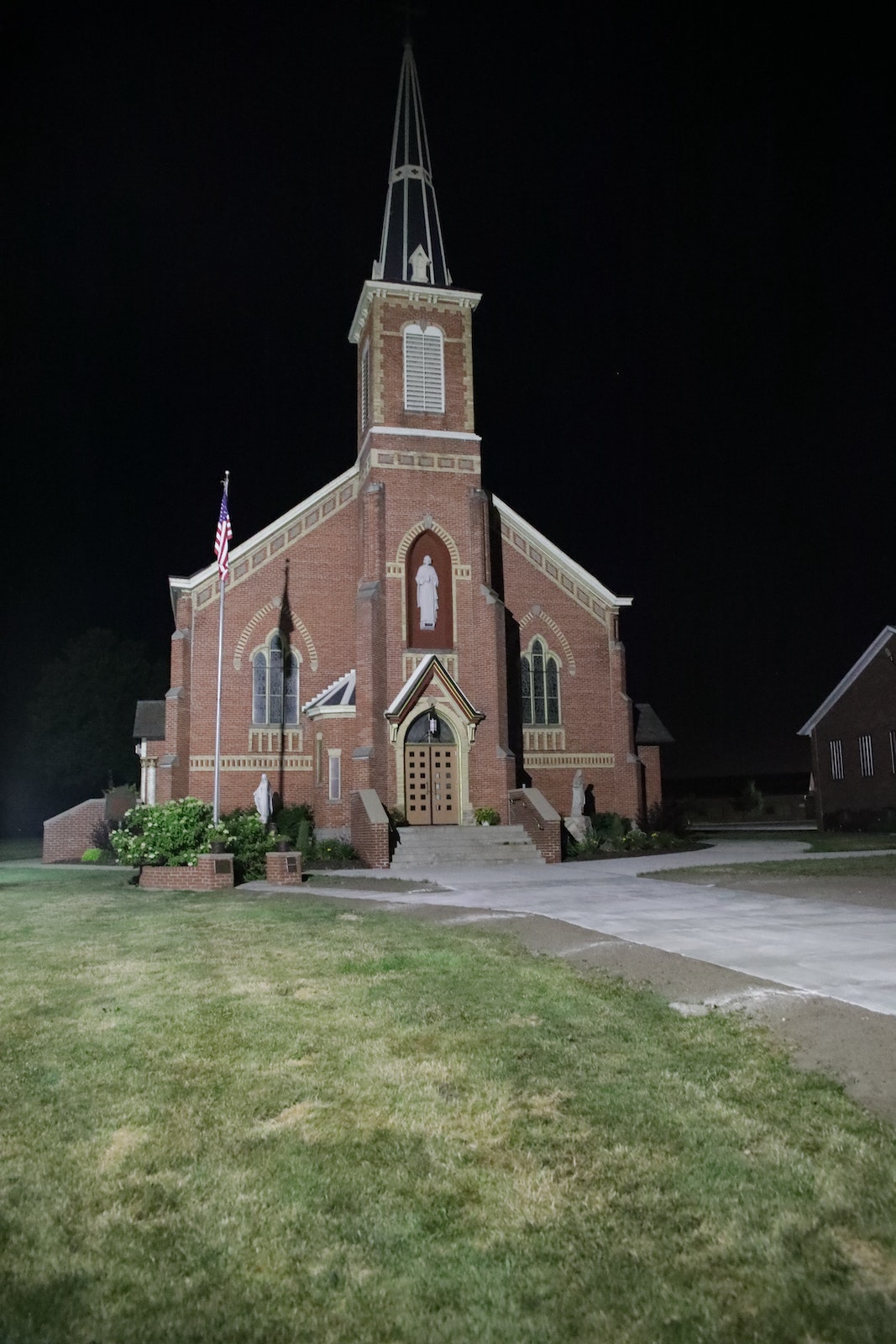 St. Charles Borromeo Church in Newport is pictured before dawn Wednesday, July 27. For those using the adoration chapel at night, the chance to pray while the world is silent offers special graces, Flint said.

Flint and her husband signed up for the 1-2 a.m. shift.

“It was early in the morning when we’d go, like 1 a.m.,” Flint said. “We had small children, so he would go or I would go. He was working a swing shift at the time, so this hour was good if he was getting off the afternoon shift at work. If he was on a different shift, I would go, and he’d be home while the children were asleep. So it was good for us.”

This year, the U.S. Conference of Catholic Bishops has called for a National Eucharistic Revival in response to a Pew Research Center survey in 2019 that reported only one in three Catholics in the United States believe in the real presence of Christ in the Eucharist.

Recently, the Archdiocese of Detroit launched AdorationFinder.org, an interactive listing of Eucharistic adoration sites across the archdiocese. Several parishes offer 24/7 Eucharistic adoration, including the Church of the Holy Spirit in Highland; Immaculate Conception in Lapeer; the National Shrine of the Little Flower Basilica in Royal Oak; Our Lady of Good Counsel in Plymouth; St. Mary, Our Lady Queen of Families in Center Line; and St. Joseph the Worker in Lake Orion.

Other parishes post regular adoration hours during certain days of the week, or at a certain time every day of the week.

Edmund Bechard of St. Charles Borromeo started going to adoration in the 1990s. He signed up for the 3 a.m. time slot because his job at Detroit Edison only gave him the middle of the night as his free time.

“I really like the quiet time,” Bechard said. “When we started perpetual adoration, we had a priest come to the parish and talk about how very pleasing it is to God that someone would take the middle of the night, because that is a hard (time slot) to cover, and we wanted to cover all the hours.” 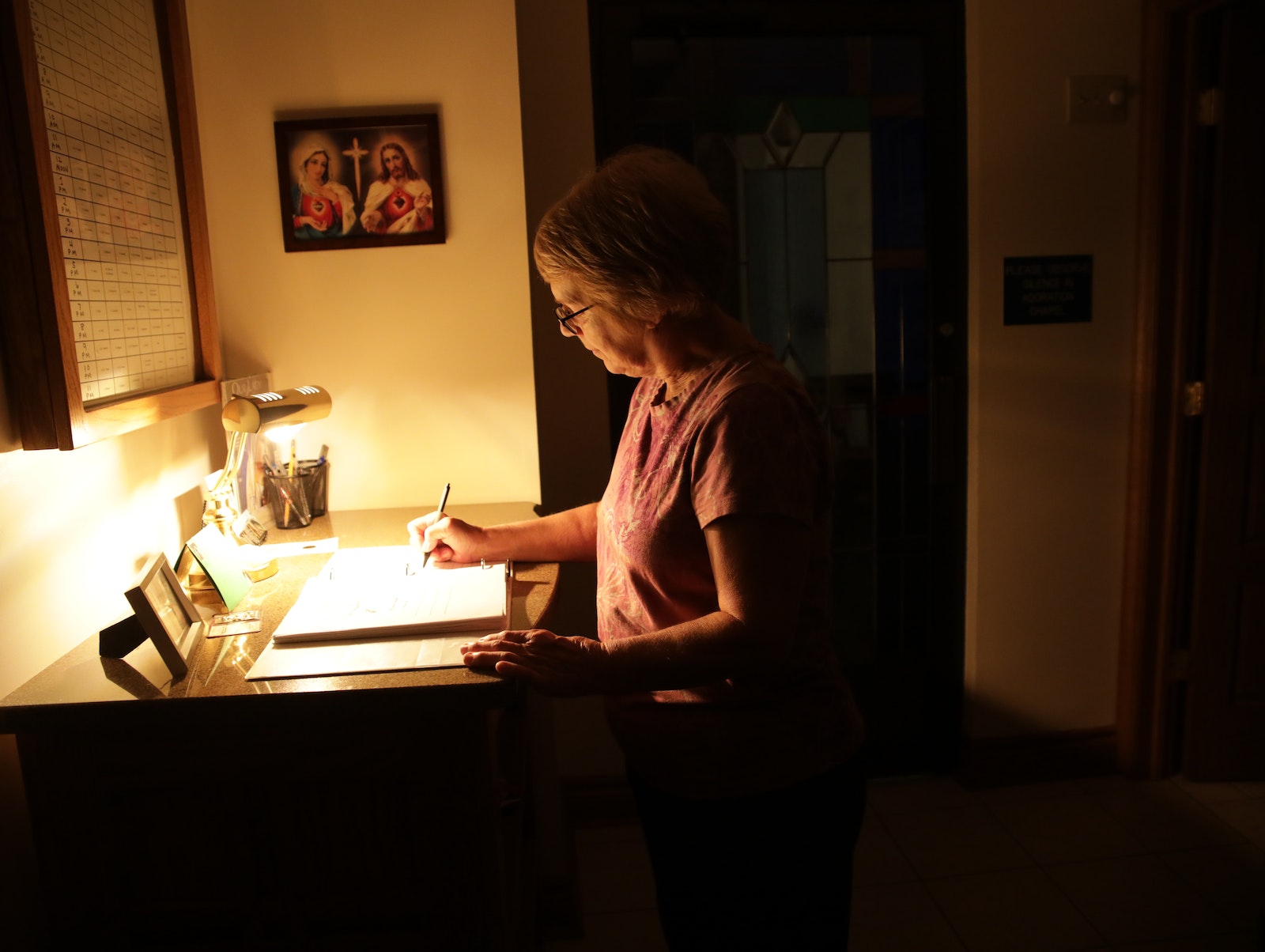 Karen Flint signs in to St. Charles Borromeo's adoration chapel for her time slot. Those who wish to make use of the chapel don't have to sign up -- anyone can just show up, she says -- but parishes do appreciate volunteers keeping vigil with the Lord.

Bechard said adoration allows him to clear his mind and just pray in the presence of the Lord. He would usually pray a rosary during his Holy Hour, but from time to time would sing hymns or just sit in silence and contemplation.

After his retirement from Detroit Edison, Bechard kept the 3 a.m. time slot for Fridays and Saturdays. He doesn’t even set an alarm clock anymore, but prays to his guardian angel to wake him up in time, he said.

Bechard said he keeps his family in his prayers when at the Eucharistic chapel, in particular his wife, Karen, who passed away six years ago after battling kidney disease and developing cancer. Karen went through three treatments of chemotherapy before the doctors stopped because she was so sick. But the cancer started to subside, to which Bechard credits his time in adoration and praying at the Solanus Casey Center in Detroit.

Karen lived three years after her cancer diagnosis before succumbing to kidney disease, but Bechard attributes those three years to the intercession of Blessed Solanus and the strength he and his wife gained through his time spent in adoration.

“Going to adoration in the middle of the night, whenever everyone else was asleep, really helped me a great deal,” Bechard said. “I felt this peace. It was therapeutic. I looked forward to having that hour to reconnect with God on a personal level. In our loud, busy world, it was a wonderful experience that I needed in that time of my life.”

While parishes do appreciate volunteers signing up for dedicated time slots, those who wish to attend adoration at a 24/7 chapel don't have to sign up, Flint said. In most cases, they can simply call the parish office for an access code. 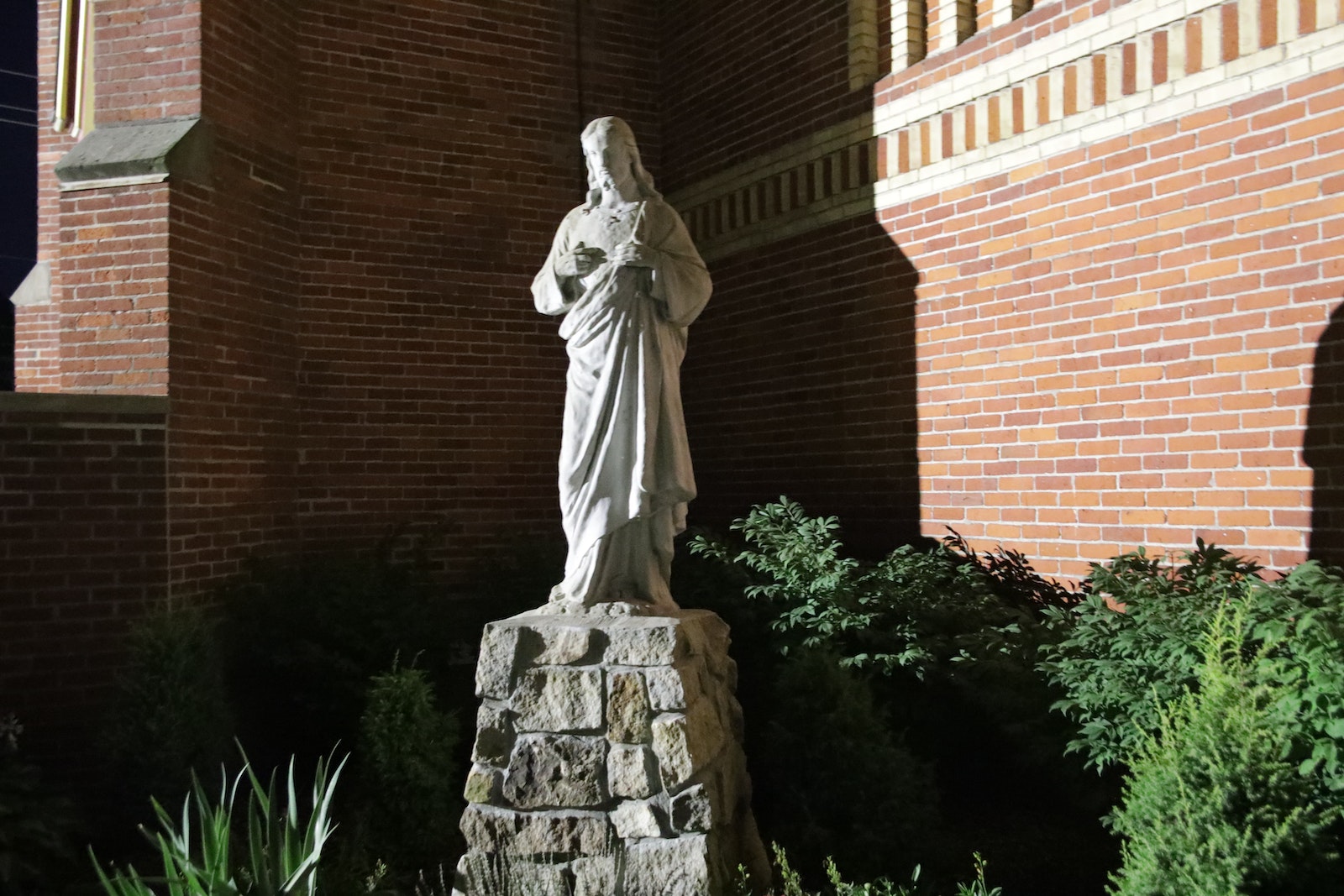 A statue of Jesus is pictured in the darkness of the campus at St. Charles Borromeo in Newport.

“They can go into the chapel anytime they want, you don’t have to tell anyone or report it,” Flint said. “If a person wants to commit to an hour, they could call me or the parish to sign up for an hour, even if that hour is already taken by someone or if it’s an hour that’s empty.”

Even those wary of signing up for a full hour can gain a lot of graces from even praying before the Lord for five or 15 minutes, Flint said.

“If you have five minute, 10 minutes, that’s all it takes,” Flint said. “I think a person who finds themselves spending just a little bit of time with the Lord will eventually find more time for it. And as far as getting things done or finishing your tasks for the day, I believe the Lord will help you. Every time you give to the Lord, He gives back to us. He multiplies it in ways you can’t imagine.”

24 Hours with the Lord

Even parishes that don't have a perpetual adoration chapel are using the Eucharistic revival as a chance to introduce the practice to the faithful with special, one-off events.

St. Frances Cabrini Parish in Allen Park is hosting “24 Hours with the Lord” event starting at 9 a.m. Thursday, Aug. 4, and concluding with 9 a.m. Mass on Friday, Aug. 5. Each hour will feature a different devotion, music or prayer for people to experience, and the church will be open for all 24 hours for people to stop by.

The event will feature local priests preaching from 2-9 p.m. on priestly vocations and a love of the Eucharist, tying in the Archdiocese of Detroit's Year of Prayer for Priestly Vocations. 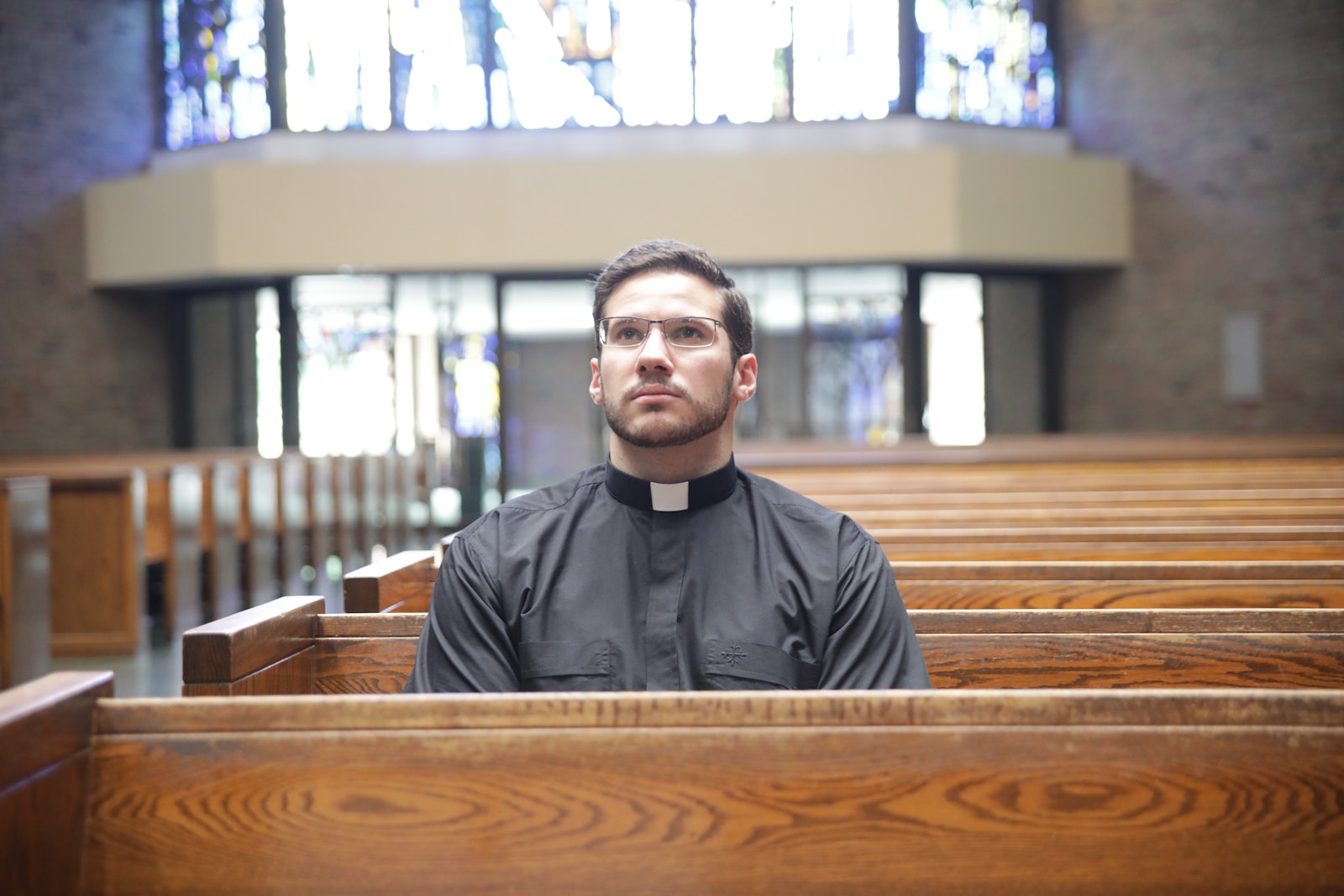 Transitional Deacon Jeremy Schupbach, who is assigned to St. Frances Cabrini Parish in Allen Park for the summer, sits in contemplation at the parish. Deacon Schupbach is helping organize a "24 Hours with the Lord" Eucharistic adoration event at the parish Aug. 4-5.

“We really want to make this a well-planned, well thought-out event for people to come in and not only adore the Eucharist, but hear powerful preaching about vocations,” said Deacon Jeremy Schupbach, a transitional deacon and seminarian at Sacred Heart Major Seminary who is assigned to St. Frances Cabrini for the summer. “We wanted to come up with an idea where people who perhaps don’t go to adoration could come at different hours and experience adoration in a whole new way.”

Deacon Schupbach sees the event as a “shallow-entry point” for inexperienced adorers; those who come will be given prompts for prayer and have the opportunity to listen to various musical styles and preaching, along with time to pray in silence.

“People won’t be walking into an empty church; there will be people and something going on,” Deacon Schupbach said. “That should be more inviting to people who perhaps aren’t in the practice of going and spending an entire hour with Jesus.”

Deacon Schupbach encourages people to bring along those who are discerning a possible vocation, but added it will benefit anyone who wants to get into the practice of listening for what God wants in their lives.

“It’s been in my experience that prayer is one of the ways God asks us to make a leap of faith in our lives,” Deacon Schupbach said. "In my experience, God has rewarded me and anyone who has given it a try.”