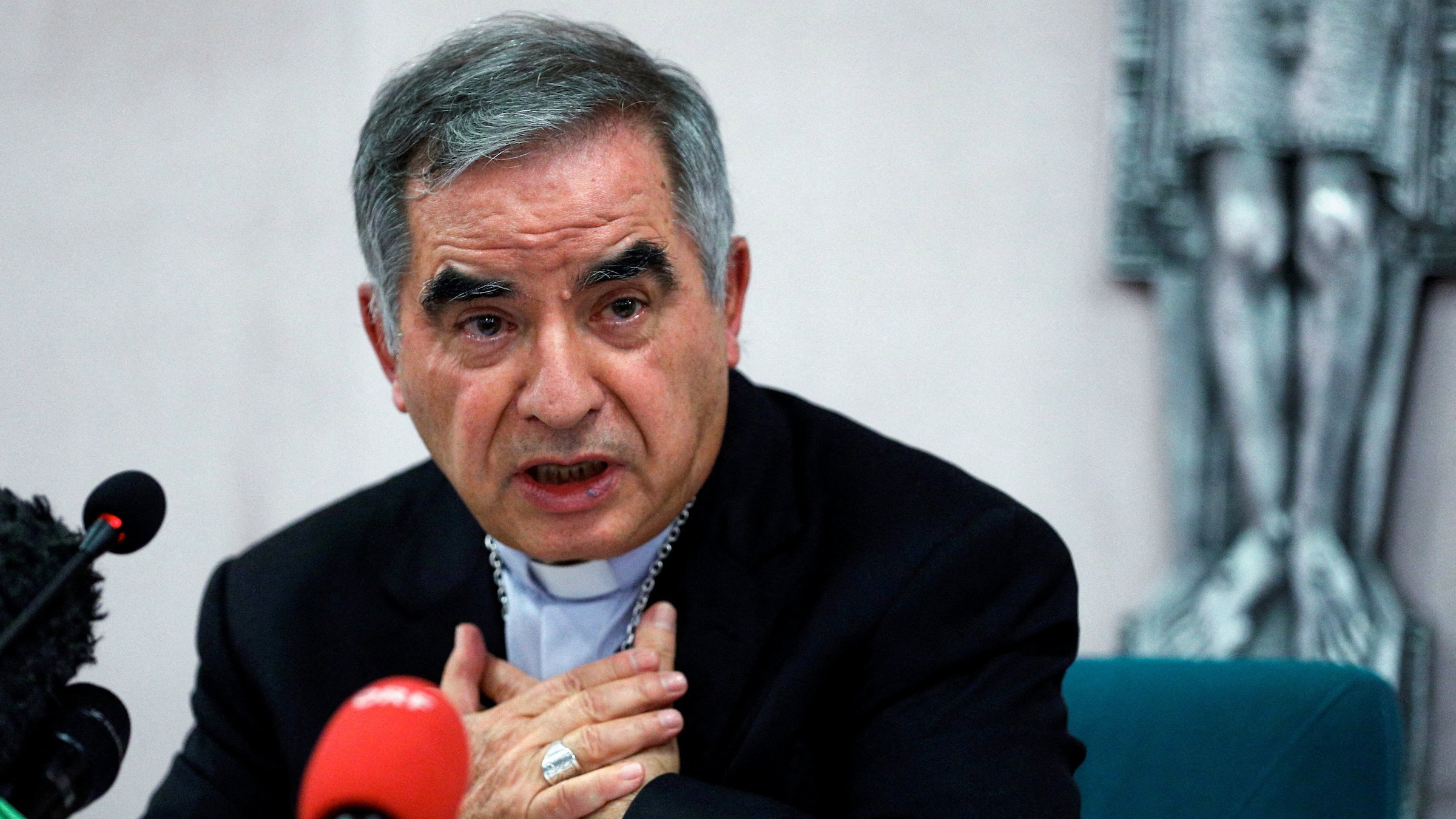 Cardinal Angelo Becciu speaks with journalists during a news conference in Rome in this Sept. 25, 2020, file photo. Vatican prosecutors continued their cross-examination May 18-19 of Cardinal Becciu in a Vatican trial focused on financial malfeasance and mismanagement. (CNS photo/Guglielmo Mangiapane, Reuters)

VATICAN CITY (CNS) -- Questioned for 15 hours over two days in a Vatican courtroom, 73-year-old Cardinal Angelo Becciu insisted the "good of the Holy See" was the only motivation for every transaction or financial decision he was involved in when he worked in the Vatican Secretariat of State.

However, testifying May 18 and responding to questions about hundreds of documents, the cardinal frequently responded that he did not know or could not remember the details.

Taking the stand for the third time, Cardinal Becciu, who is accused of embezzlement, abuse of office and witness tampering, told the court that the 2017 resignation of Libero Milone, the former Vatican auditor general, was ordered by Pope Francis.

The cardinal said he had declined to answer questions about the resignation at the trial's session May 5 "out of love for the Holy Father," but he had since "asked the pope if I could speak freely (and) he said yes."

"I had no responsibility in Milone's resignation," he told the court. "The order was issued by the pope without my participation. He asked me to summon Milone and inform him that he no longer enjoyed his trust."

In June 2015, the pope named Milone as the Vatican's first independent auditor, a five-year contract position that was seen as a key component of Pope Francis' efforts to reform the Vatican's finances.

However, with no explanation, the Vatican announced in 2017 that Milone submitted his resignation, and it was accepted by Pope Francis.

Later, Milone told the Reuters news agency that he was forced to resign after opponents of Pope Francis' financial reforms mounted a campaign against him.

The former auditor's claims prompted a response from the Vatican, saying that Milone "illegally hired an external company to undertake investigative activities about the private lives of representatives of the Holy See."

"This, besides being a crime, irremediably strained the trust placed in Dr. Milone," the statement said.

At the Vatican trial May 18 and 19, deputy prosecutor Alessandro Diddi led the cross examination of the cardinal, including on investments made when he served in the Vatican Secretariat of State.

Tensions rose in the courtroom when Diddi made a sarcastic comment regarding Cardinal Becciu's lack of memory, prompting Giuseppe Pignatone, president of the Vatican City State criminal court, to order a five-minute recess and warn Diddi that his comment was a "provocation."

Cardinal Becciu also was asked about his dealings with Cecilia Marogna, an Italian political analyst he allegedly hired, but whom the Vatican court has accused of embezzling money through a humanitarian organization she ran in Slovenia.

The cardinal said he was still in contact with Marogna after an Italian news program reported that money allegedly sent by the Secretariat of State to help fund the release of Catholic hostages was instead used for purchases at several high-priced fashion boutiques, including Prada, Louis Vuitton and Moncler.

"I was nervous, I called her, and she denied everything," Cardinal Becciu said. "I was convinced she was telling the truth. I kept hearing from her because she had to update me on the negotiations" to secure the release of Sister Gloria Cecilia Narvaez, a Colombian nun kidnapped by jihadist militants in Mali.

Pignatone accepted a request May 18 made by Msgr. Alberto Perlasca, the prosecution's chief witness and former head of the Vatican Secretariat of State’s administrative office, to be a civil party in the suit against Cardinal Becciu on the charges the cardinal faces for witness tampering. Although, the court rejected a similar request Msgr. Perlasca made against four other defendants.

However, the following day, Msgr. Perlasca arrived unannounced at the trial, surprising many in the courtroom. Informed of his presence, Pignatone ordered Msgr. Perlasca to leave and said that, as a witness for the prosecution, he could not be present. Court room observers noted that Msgr. Perlasca reluctantly left the room and lingered outside for several minutes before finally leaving the area.

Before the prosecution continued its cross-examination, Cardinal Becciu read a statement expressing his dismay at "the humiliation" he endured in the questioning the previous day.

"It hurts me to say that certain questions directed toward me by the prosecutor's office offended my priestly dignity and my personal honesty," the cardinal said.

Taking issue with Diddi's insinuation the day before that "I was pretending to not understand or not remember," Cardinal Becciu said the deputy prosecutor's questions were irrelevant to the accusations against him "and offend my dignity as a cardinal and, through it, the entire church."

Nevertheless, for several hours, the prosecution continued to show various documents to Cardinal Becciu, to which he continued to respond that he did not know or remember details. After Diddi concluded his cross-examination, lawyers representing civil parties and defendants, as well as the tribunal judges were allowed to question the cardinal.

Pignatone also denied a request by Marogna's lawyer to read a statement on her behalf, reiterating that the moment was only for questions directed toward Cardinal Becciu.

The purpose of the statement, which her lawyer shared with the press, "was to report some clarifications and corrections" to Cardinal Becciu's statement in court regarding how he met Marogna, as well as her role in Sister Gloria's release.

The trial will resume May 20. Fabrizio Tirabassi, a former official at the Secretariat of State accused of corruption, extortion, embezzlement, fraud and abuse of office, is set to take the stand.