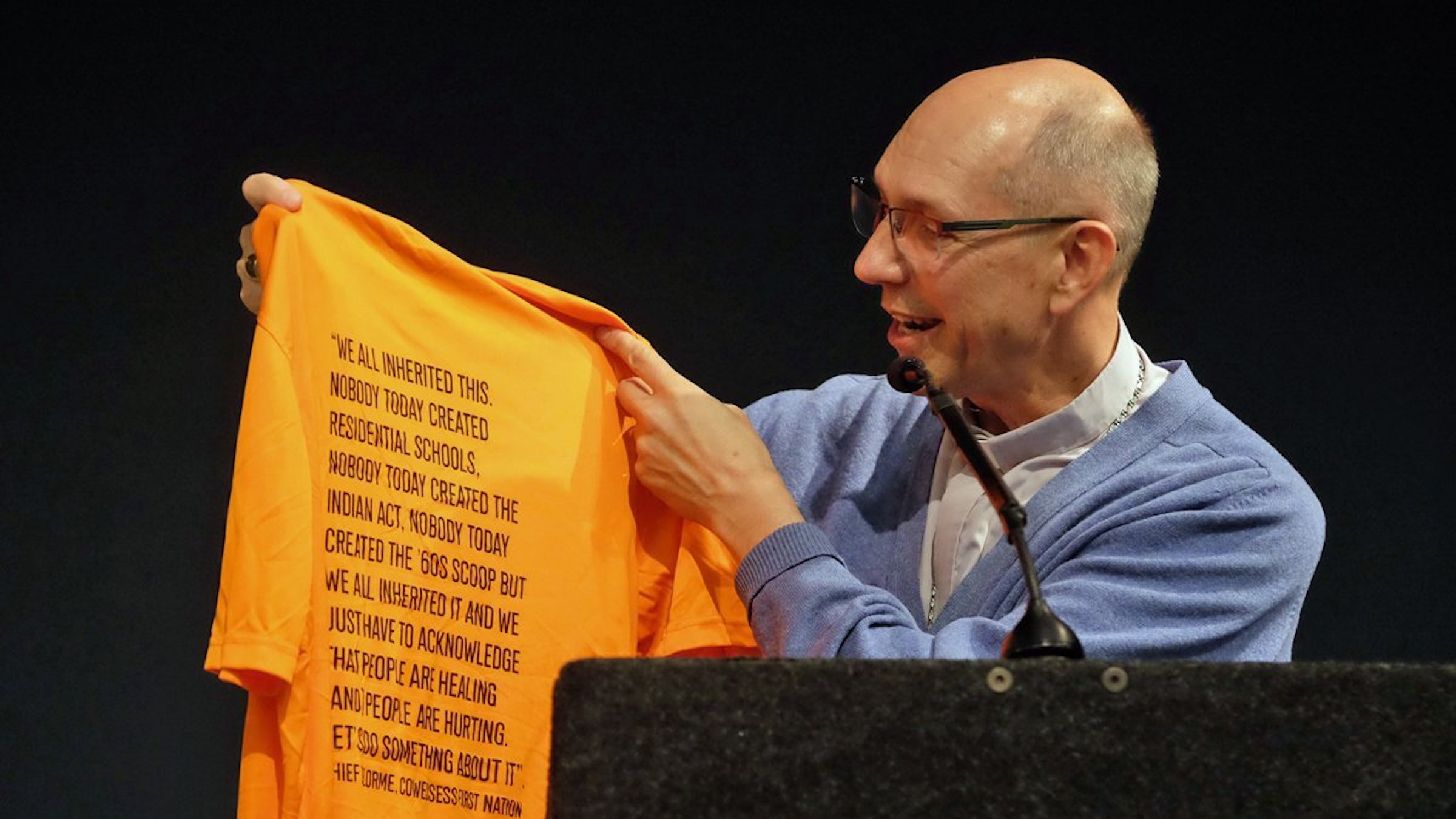 SASKATOON, Saskatchewan (CNS) ─ Chief Cadmus Delorme of the Cowessess First Nation and Archbishop Donald Bolen of Regina, Saskatchewan, have been walking together for some time now -- including through the work of ground-penetrating radar and finding 751 hits near a former Catholic-run residential school last summer.

"It took the validation of unmarked graves (to) put us in this moment," Delorme said at a recent "Walking With Your Neighbor" event in Saskatoon. He described how the discoveries of unmarked graves has led to millions of Canadians putting down their "shields" and admitting they did not know the truth about Indigenous peoples and Canada.

"We are truly at a moment where all of us -- Indigenous and not -- must all reset our compass just a little bit -- because our children and children yet unborn depend upon this moment. We could look the other way and stay with the status quo ... but the status quo doesn't work," said Delorme.

"Walking Together" is the theme of Pope Francis' July 24-29 visit to Canada's Indigenous peoples. In the presentation at the Cathedral of the Holy Family, Archbishop Bolen stressed the importance of finding a new way of walking together and coming to a new understanding of the truth of Canadian history.

"The conversation starts to open up between the church and Indigenous peoples when we acknowledge the profound suffering, the waves of suffering that so many Indigenous peoples have experienced in the context of residential schools, and more broadly in the context of the Indian Act and colonization," said Archbishop Bolen. "We need to acknowledge our responsibility as church for our involvement in these schools, that took away language and culture and spirituality and suppressed so many good things."

He pointed to the direct line from that history to the intergenerational trauma that many Indigenous individuals, families and communities carry, and he urged his listeners to acknowledge and understand the connection between the many challenges that Indigenous peoples face today and the legacy of residential schools and colonization.

"When we look at our society today and look at societal indicators of well-being, we see the systemic injustice that is still part of our society, that still creates waves of suffering," he said. "We see the inequalities in access to education and health, the levels of poverty. We see the intergenerational trauma and its effects when we look at the incarceration rates ... we need to see that direct line to the causes of that trauma, and we need to be actively taking responsibility."

This includes the step of apologies, Archbishop Bolen said. Pope Francis apologized to Canada's Indigenous leaders at the Vatican earlier this year and, because of the importance of land in their culture, Indigenous Canadians are seeking an apology during the July visit.

But the archbishop said "when we as non-Indigenous people talk to survivors and hear them tell their stories, when we hear those experiences of deep trauma ... we need to engage in that apology ourselves." More important will be the question of "what happens the day after the apology," said Archbishop Bolen, citing words of Delorme.

The event was held before the announcement that Pope Francis would visit Edmonton, Alberta, Quebec City and Iqaluit, Nunavut when he visits. Archbishop Bolen said the visit is an opportunity for "working together with Indigenous communities to bring as many survivors as we can to wherever he comes, for finding ways for those Indigenous peoples who can't go -- to create spaces of encounter."

He suggested communities could invite and welcome their First Nations neighbors to a meal to view events together on a large screen. "We need to find ways to actively engage and to make the pope's visit as powerful as possible."

"But we inherited it. And when you inherit something, you have to do something about it," he said, noting how in the summer of 2021, as chief, he was called upon to be a spokesman for his Cowessess nation during the revelation of 751 unmarked graves. "And I have to explain to my community, to survivors, to my community, to this province, this country, and even to the international community that wanted to know ... our validation of unmarked graves."

"For Indigenous people it is validation of the pain, the frustration, the anger, the tiredness of trying to remain Indigenous in a country that is still somewhat oppressive." This moment is also a call to move forward, to finally get beyond the "status quo," he said.

"I want to talk about truth. Why is it that it took unmarked graves for many Canadians to finally put their shield down and admit that they want to know more about Indigenous Peoples in Canada?" he challenged. "In this country -- a G7 Country, a developed country, a country with a Charter of Rights and Freedoms that guarantees vertical lineage in families ... something was missed."

More Canadians are now focused on the truth, he said. "Yes, acknowledge the land ... but follow up with something you are doing for truth and reconciliation."

As for the end goal of reconciliation, he reflected on his 5-year-old daughter's aspiration to someday be an airplane pilot.

"In this country the toughest people to be are Indigenous women," said Delorme, wondering if his daughter will have to work twice as hard to be a pilot or how she will overcome the barriers she faces in this society right now.