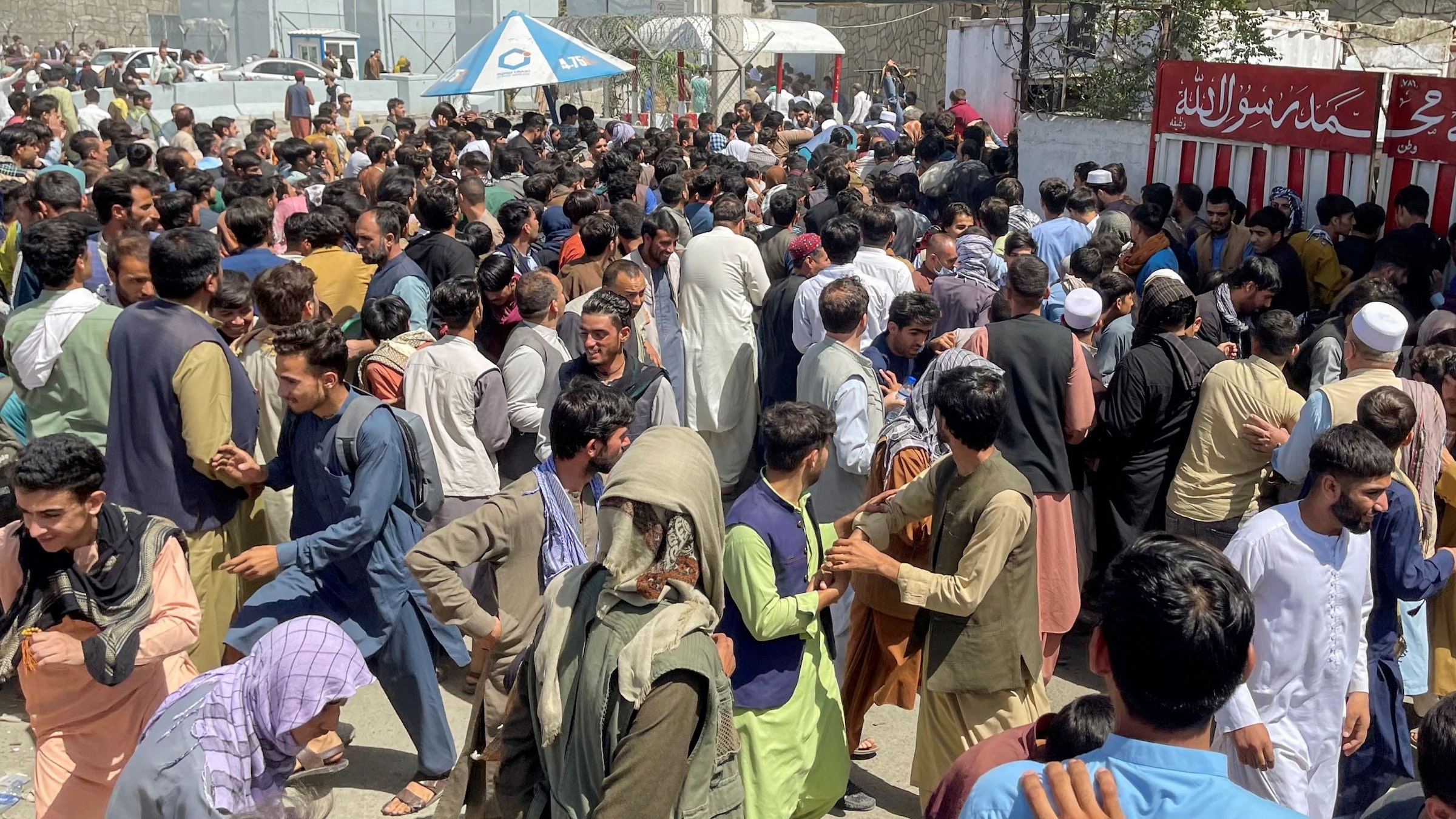 People try to get into Hamid Karzai International Airport in Kabul, Afghanistan, Aug. 16, 2021. During his Angelus address Aug. 15, Pope Francis expressed his concern for Afghanistan amid the Taliban's control of the country. (CNS photo/Reuters)

VATICAN CITY (CNS) -- Caritas Italy announced the suspension of charitable activities in Afghanistan in the wake of the Taliban's takeover of the country.

In a statement released Aug. 15, Caritas said the "instability of the situation has led to the suspension of all activities" and has increased fears "of maintaining a presence in the future, as well as for the safety of the few Christian Afghans" in the country.

The Jesuits, who have been in Afghanistan since 2004, have also suspended their mission in the country "indefinitely.”

Speaking on the condition of anonymity, a Jesuit priest in New Delhi told ucanews.com Aug. 17 that two Jesuit priests are among many Indian nationals in Afghanistan waiting for their government's evacuation flights.

The Jesuit priests "are so far safe and are ready to fly to India” when flights resume, the unnamed priest said.

Four Missionaries of Charity nuns are also awaiting evacuation from the country. A representative for the religious congregation in Kolkata told ucanews.com the nuns are still in Afghanistan and that only one is an Indian national.

However, she declined to identify the nationalities of the other three nuns out of caution for their safety.

The Taliban, an extremist Islamic movement that ruled Afghanistan until ousted by a U.S.-led coalition nearly 20 years ago, swiftly took control of the capital city of Kabul Aug. 15 after Afghan President Ashraf Ghani fled the country.

The U.S. invaded Afghanistan in late 2001 in a bid to dismantle al-Qaida and force the Taliban from power. More than 2,300 U.S. soldiers have died in the 20-year conflict, the longest war in U.S. history, and thousands of Afghan civilians were killed and displaced as a result of the conflict, according to the U.N. Mission in Afghanistan.

Caritas Italy, which has been present in the country since 1990, said that it ran several programs in Afghanistan that provided "emergency aid, rehabilitation and development.”

It also oversaw "the construction of four schools" in the central Ghor Province, as well as building 100 shelters for 483 refugee families in the Panjshir Valley, located 93 miles north of Kabul.

Prior to the Taliban's takeover, the Catholic charitable organization was focused mainly on helping "vulnerable minors.”

However, the withdrawal of U.S. forces has left the country "in a tragic abyss" after 20 years "with incalculable human costs and billions of euros in expenditures," it said.

"As always, it will be the weakest who pay the highest price," Caritas said. "Already tens of thousands of people are fleeing from the combat zones while the Taliban are now in the capital, Kabul. Along with embassy personnel, even the very few priests, religious men and women who are in Kabul are preparing for their forced return.”

Nevertheless, despite the challenges, Caritas said its office in Pakistan will oversee the arrival of "a growing number of refugees fleeing the war zone," which will increase pressure in surrounding countries.

In Pakistan, Caritas will "evaluate the situation in the Quetta, along the border with Afghanistan, in view of the large influx of refugees," the statement said.