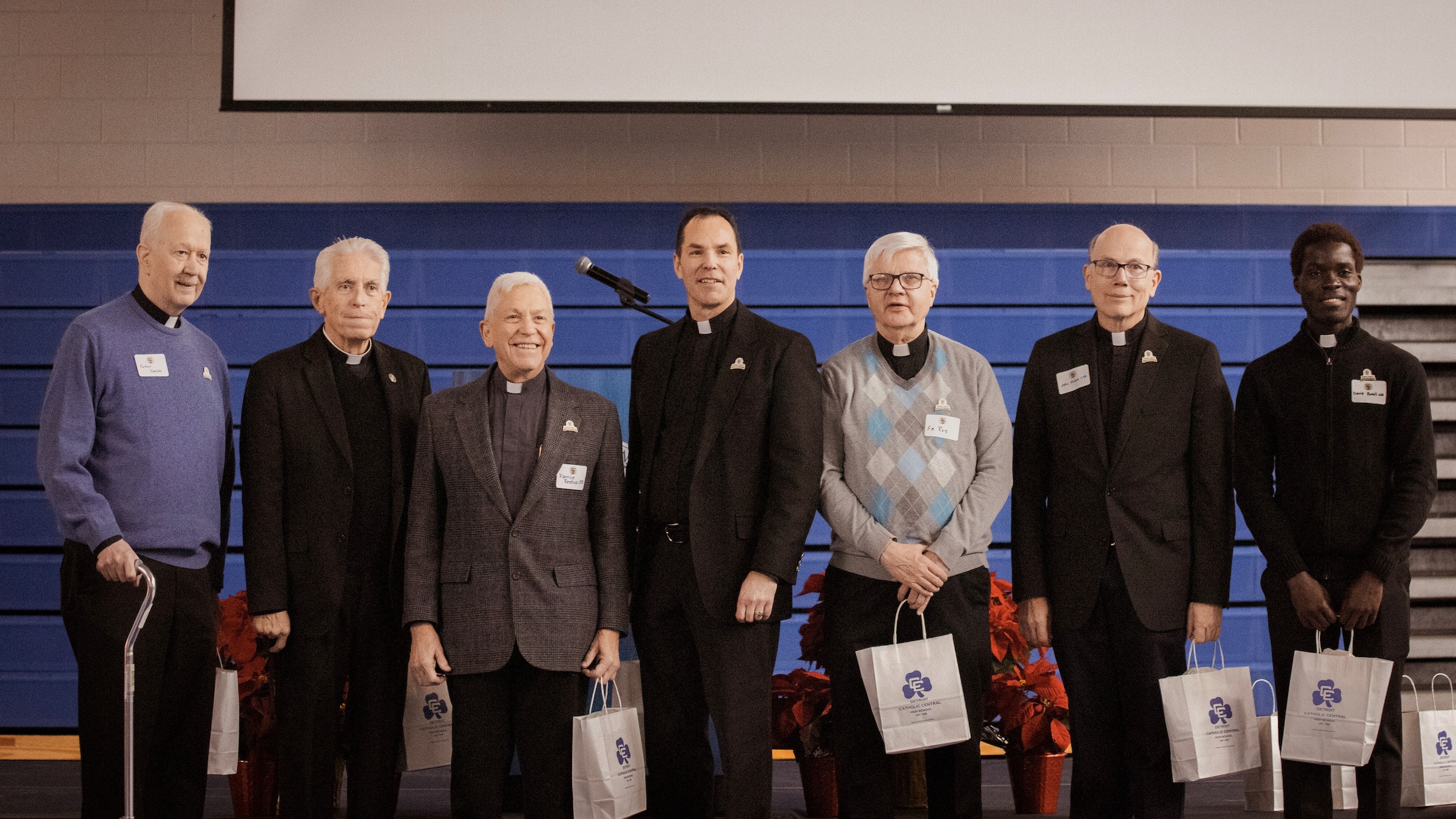 Members of the Congregation of St. Basil, commonly known as the Basilian Fathers, pose for a photo during a celebration of the community's 200th anniversary Nov. 19 at Detroit Catholic Central High School in Novi. The congregation, which began in the aftermath of the French Revolution, has served in the Archdiocese of Detroit for more than a century, including 95 years at the Novi school. (Photos by Alissa Tuttle | Special to Detroit Catholic)

Order of priests founded after the French Revolution has served at Catholic Central, Ste. Anne and other Detroit institutions

NOVI — As a Basilian Father, Catholic Central High School alumnus and former principal, Fr. Dennis Noelke is still awed by the origin of his order in Annonay, France, 200 years ago.

“Two hundred years is a long time,” Fr. Noelke said of the order’s bicentennial anniversary. “In itself (it is amazing) that this little group of 10 priests came together and have come to influence hundreds of thousands of people worldwide.”

Fr. Noelke, 69, who was ordained for the Congregation of St. Basil more than 40 years ago, was among nearly a dozen members of the congregation from Windsor and Detroit and several hundred people from the school community celebrating the milestone Nov. 19 at Catholic Central High School in Novi.

The Congregation of St. Basil, founded Nov. 21, 1822, during a time of turmoil after the French Revolution, is known for their focus on education, opening schools throughout the world. The order was named for St. Basil after people in the founding French community referred to the 10 priests as “Basilians” because they congregated at the local church called St. Basil. 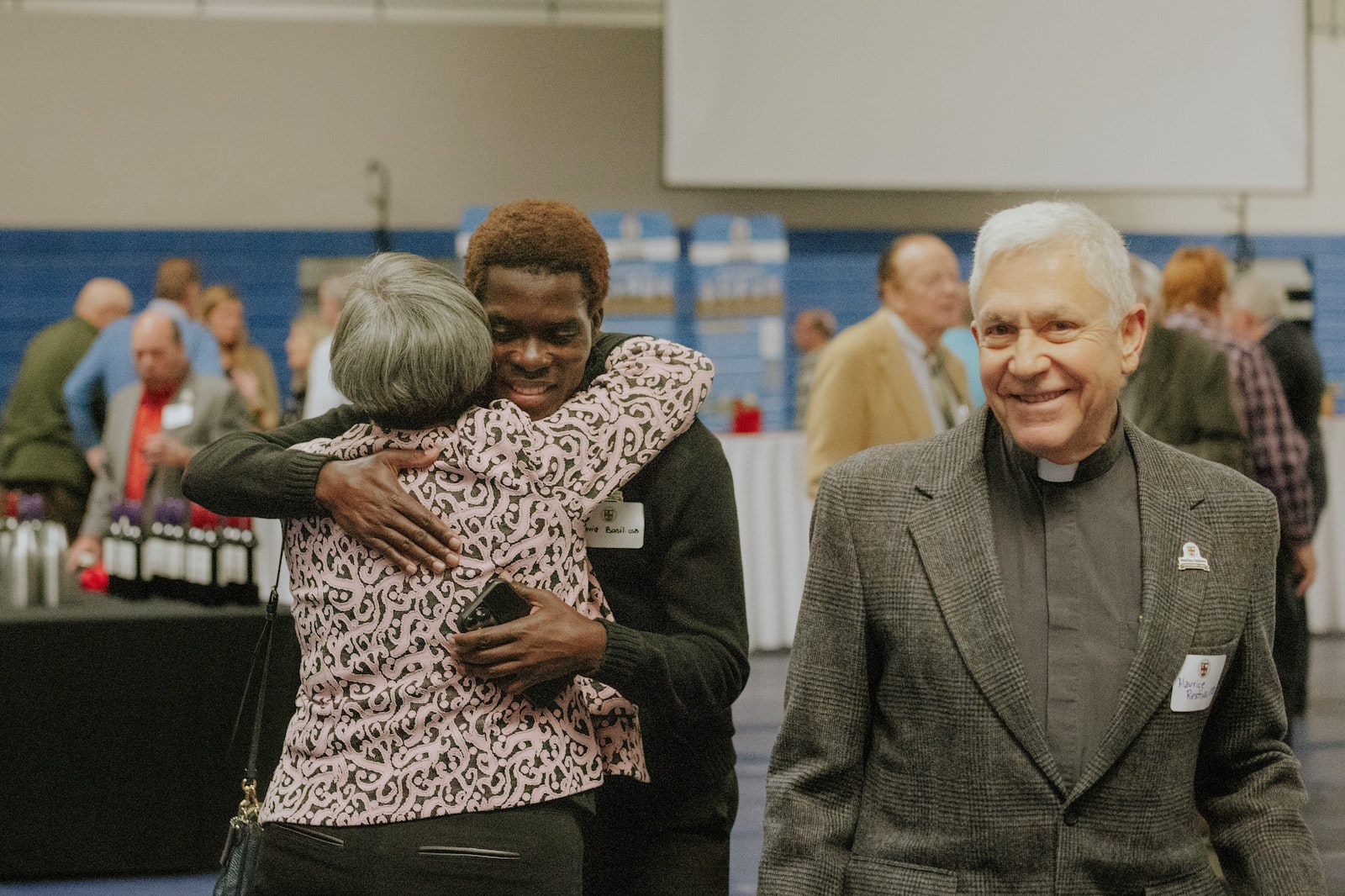 In 1886, a group of Basilian Fathers crossed into Detroit after starting their North American mission in Canada, then eventually moved into Mexico and Colombia.

In Metro Detroit, Basilian Fathers are currently involved at Catholic Central and as co-sponsors of Cristo Rey High School in Detroit. For 125 years, until 2012, they sponsored Detroit's oldest parish, Ste. Anne, and have also served at Holy Redeemer High School in Detroit and at a retreat center in Pontiac. On Sundays, they are known to preach and assist at many local parishes.

Fr. Noelke, whose uncle was also a Basilian priest, has both a personal history as well as a communal history with the Basilians. He was a Catholic Central student, and later became a priest, a teacher and a principal at the same school he attended in his youth.

“I started as a student at CC in 1967,” Fr. Noelke said. “I’ve seen it full circle. To think how we started and how this little group of priests made their way to Canada then to the U.S., I know we have touched many people’s lives both in our education history and pastoral history. It is quite a moment.”

It also was a special moment to Catholic Central junior David Kibbey, who attended the celebration, which was sponsored by the school's Mothers' and Dads' clubs. 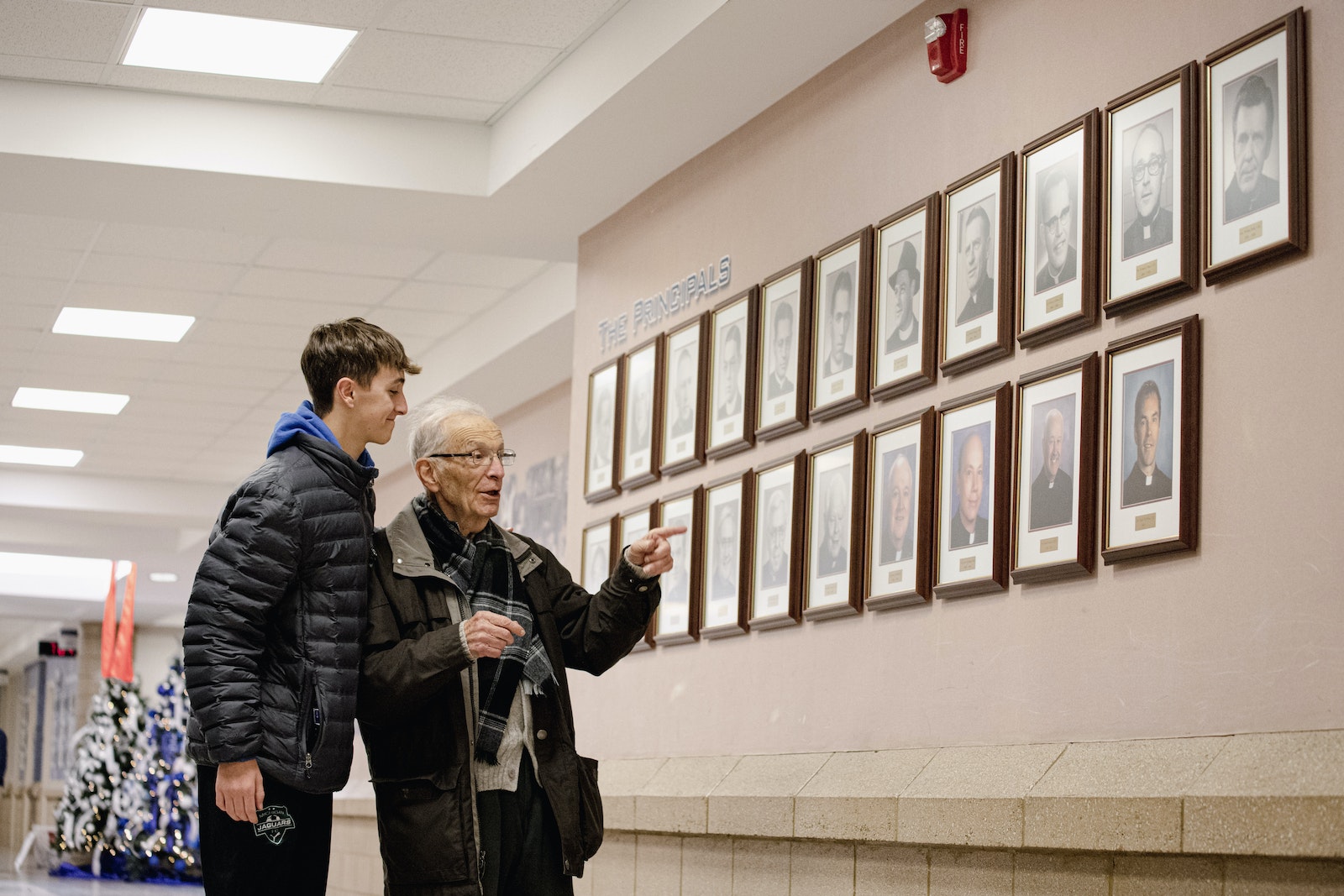 The Basilian Fathers have staffed Catholic Central High School for more than 95 years, having previously served in other ministries throughout the Archdiocese of Detroit, including for more than 125 years at Ste. Anne Parish in Detroit.

“CC is such a special place,” Kibbey said. “To be here to take part in the 200th anniversary is a fantastic experience. I’m honored to be a student here in this period of time. They teach us to perpetually give, and to give as much as possible.”

The event, held in Catholic Central's gymnasium, included a wine and cheese reception and a video highlighting the order’s local history, as well as video and in-person speeches congratulating the members of the order and entertainment by Catholic Central’s String Orchestra and Jazz Ensemble.

Sherry Diederich, a Catholic Central board member and a parent of CC alumni, was part of the celebration committee. She said her sons, Dan (’15) and Matthew (’18), have been successful in life as the result of their Basilian education, which focuses on the pillars of “Goodness, Knowledge and Discipline.”

“Goodness is definitely in their lives,” Diederich said. “They would take the shirt off their back to help someone, and they are trying to give back. Knowledge — they take their education very seriously, and discipline we see a lot.”

Chris Tomaszek said the Basilians’ influence on his education has meant a lot to him and his wife Michelle, who are parents to a current student and an alumnus. 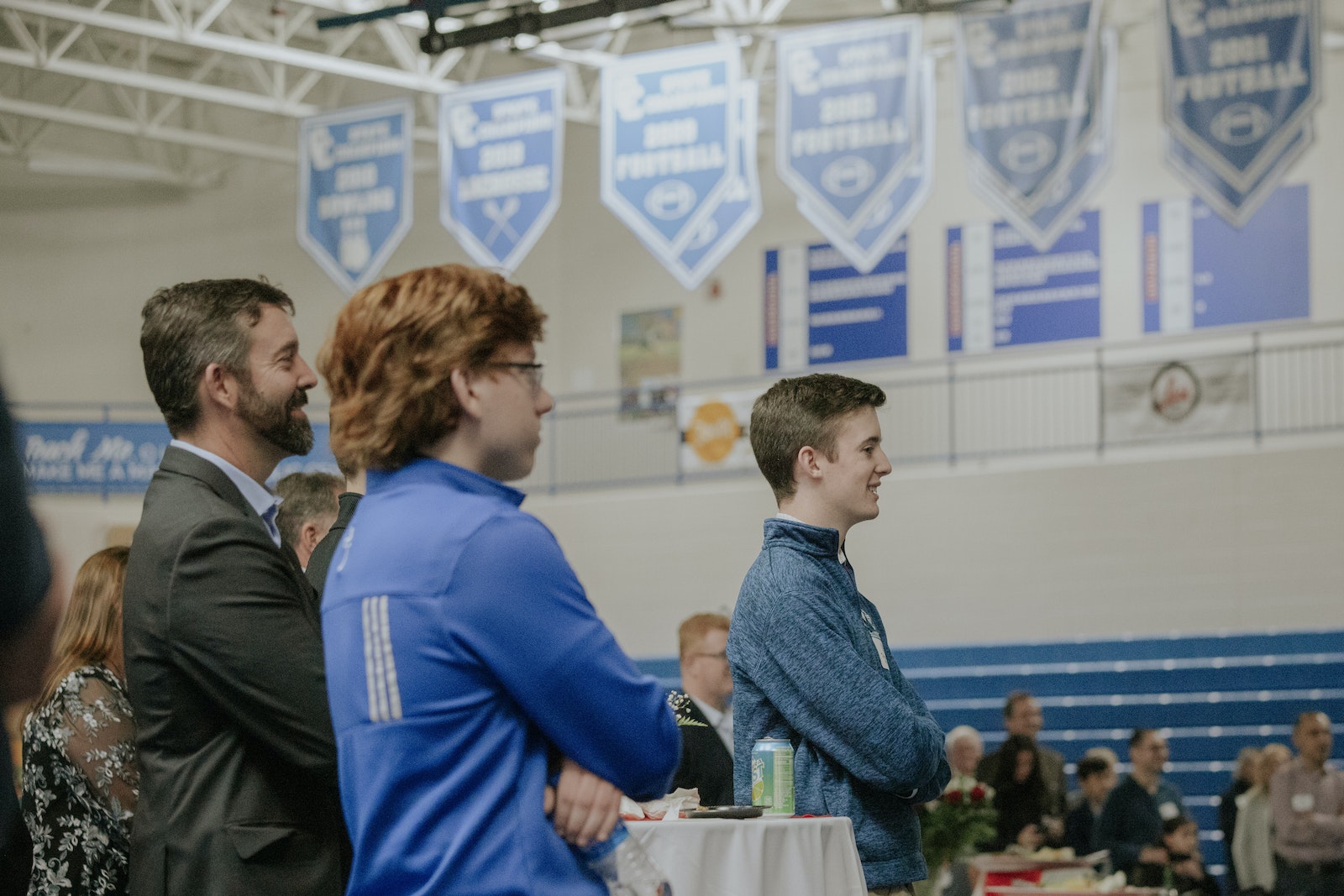 Catholic Central students and parents look on during a recognition ceremony Nov. 19 for members of the Congregation of St. Basil at Catholic Central High School in Novi.

“With the education, the awareness and the respect, our boys have grown,” Tomaszek said. “They are better people because of CC and the Basilian Fathers.”

Catholic Central director of advancement and alumnus Dan Collins said the same holds true for him.

“The Basilian Fathers are very significant in my life," Collins said. "They have changed thousands of lives for nearly 95 years here at Catholic Central. There is not a day or a week that passes in my life that I don’t speak to an alumni who tells me about the difference the Basilians have made in their life.”

School president Ed Turek concluded the evening telling the attendees Catholic Central would not be here if it wasn’t for the Basilian Fathers’ focus on education.

“The world is a better place with more (CC mascot) Shamrocks in it and we have the Basilian Fathers to thank for it,” he said. 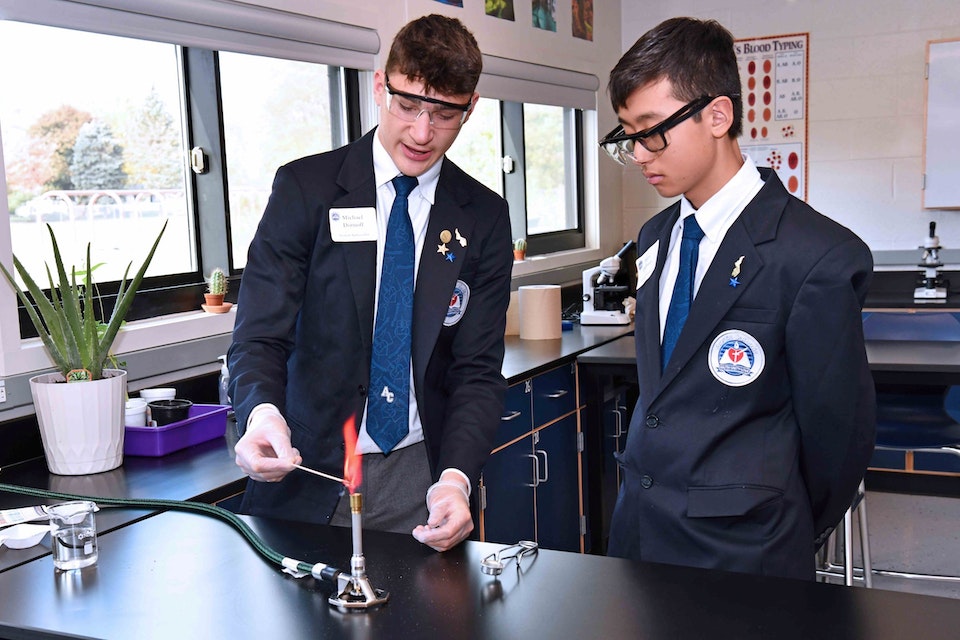 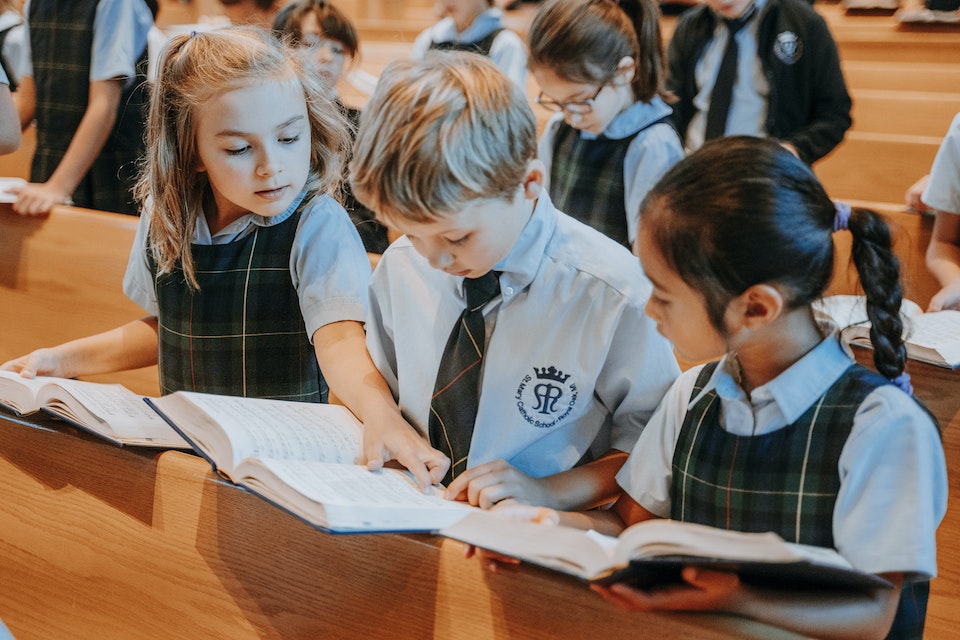