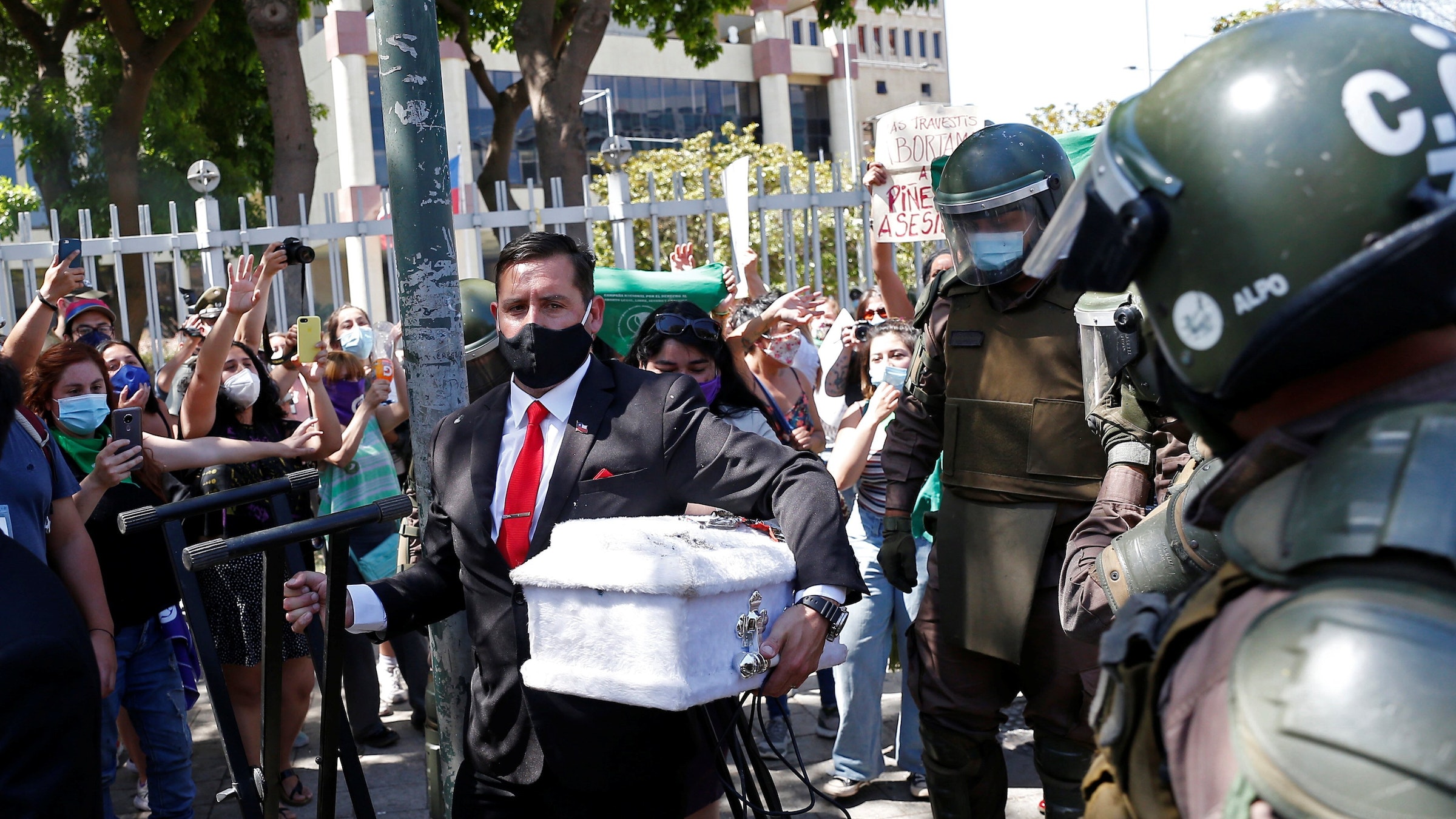 A preacher carrying an empty child-size coffin is escorted by police officers as pro-life activists and people in favor of decriminalizing abortion clash outside congress in Valparaiso, Chile Jan. 13, 2021. Lawmakers in Chile's lower house of congress Nov. 30 narrowly defeated a bill that would have removed criminal sanctions for abortion during the first 14 weeks of pregnancy. (CNS photo/Rodrigo Garrido, Reuters)

SANTIAGO, Chile (CNS) ─ Lawmakers in Chile's lower house of congress narrowly defeated a bill that would have allowed abortion early in a pregnancy.

The bill, defeated 65-62, would have removed criminal penalties for the procedure during the first 14 weeks of pregnancy. The Nov. 30 vote effectively postpones any legislation on the issue for at least one year.

Lawmaker Maite Orsini of the left-leaning Broad Front told The Associated Press the bill would be introduced again at an unspecified future date.

Chile previously banned abortion outright, but in 2017 it made abortion legal in some circumstances, such as rape or if the mother's life is at risk.

The country is currently rewriting its constitution, a process that could address the abortion issue. Chile holds a runoff election Dec. 19, in which the two candidates hold diverging views.

Chile's bishops expressed opposition to decriminalization after a bill to debate the issue was passed by Congress in September. The bishops said in a statement, "Unconditional respect for human life must guide any ethical, legislative, human and health consideration in the face of the reality of an unwanted pregnancy."

Across Latin America, women have pushed the decriminalization of abortion with mass street protests, and pro-life groups have mobilized in response.

In October, Mexico's Supreme Court declared unconstitutional a state-level law that applied criminal sanctions of up to three years in prison for women terminating pregnancies. The decision set a precedent for cases nationwide. In December 2020, Argentina's Congress approved the decriminalization of abortion during the first 14 weeks of pregnancy.

In Latin America, abortion is legal in Cuba, Guyana and Uruguay, but is completely banned in countries such as El Salvador, Honduras and Nicaragua.