CHSL Central Division teams beat up one another before packed gyms 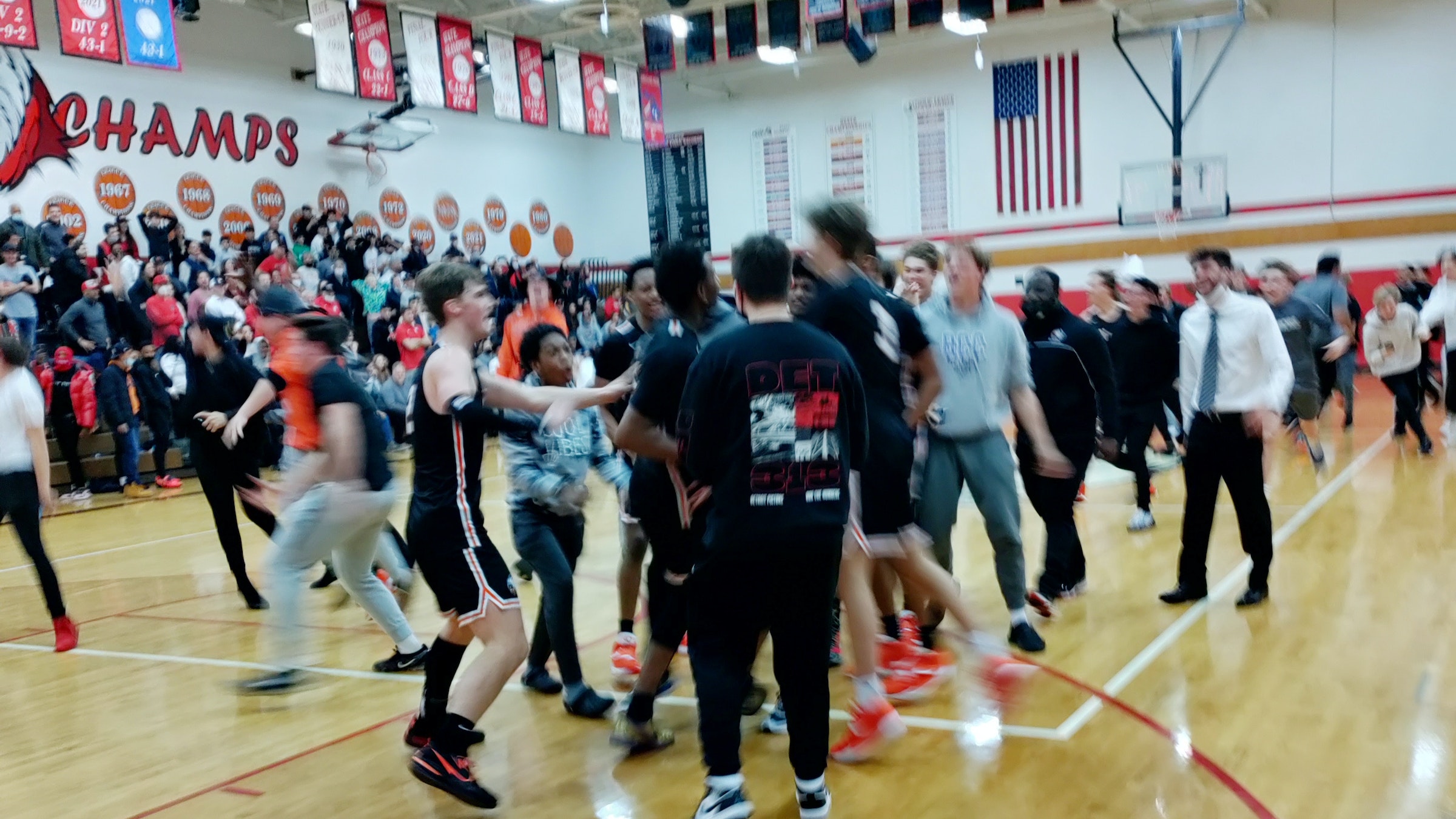 Curtis Williams is somewhere in the middle of a mob of fans celebrating Brother Rice’s 45-43 victory over St. Mary’s when Williams’ jump shot fell into the basket just a second before the game-ending buzzer sounded. Both teams are 1-1 in one of the most heated and competitive Central Division boys basketball season in years. (Photo by Don Horkey | Special to Detroit Catholic)

ORCHARD LAKE — There hasn’t been this much confusion about who’s where since Abbott asked Costello, “Who’s on first?”

The Catholic League’s boys basketball Central Division has its own version of that classic comedy routine, but it’s no laughing matter. It’s serious business for the players and coaches and loads of excitement for the fans.

The ratings by the so-called experts are fodder for conversations and speculation, but here are the rankings that really matter, the league standings heading into Week 2:

U of D Jesuit (overall 5-2) — The Cubs were in command from start to finish in their 61-42 victory over Brother Rice. They led 34-22 at the half and 51-31 after three quarters. Senior Chris Mutube led the offense with 17 points, senior Phil Regan contributed 12, and junior Sonny Wilson 11.

Recalling coach Pat Donnelly’s pre-season caution: “The talent level on every team is phenomenal. It’s ridiculous. I don’t see one team blowing through.”

Catholic Central (6-1) — A pair of sharp-shooting sophomore guards inspired the Shamrocks’ 60-50 win over De La Salle. TJ Nadeau led all scorers with 25 points, and Chas Lewless had 11. Combined, they were responsible for seven of the team’s nine 3-pointers.

The Shamrocks opened the second half with an 11-0 run to increase their lead to 38-24. The Pilots rallied to within six points late in the fourth quarter but could come no closer.

“We made adjustments (at the half),” said Shamrocks coach Brandon Sinawi. “We told the boys that the first three minutes are going to win the game in the second half. They came out and executed beyond belief.”

St. Mary’s (7-1) — The Eaglets have been living on the edge in their last three games, a 3-point win over Grand Blanc and a two-point double-overtime decision against De La Salle. Their luck ran out against Brother Rice, a 45-43 loss that came on a buzzer-beating jump shot from around the free throw line by Curtis Williams.

Kareem Rozier converted a pair of clutch free throws with 47 seconds to play to tie the score at 43-43. The Warriors ran out the clock to set up Williams’ heroics. RJ Davis chipped in 12 points and Johnathan Blackwell 10.

Rozier rescued the Eaglets in the 66-64 win against De La Salle. His layup went through the hoop as the horn sounded to win a contest that St. Mary’s led by 14 points late in the third quarter. Hannah led the Eaglets with 25 points. McKenna had 17.

“It’s tough, but we’ll bounce back,” said St. Mary's coach Todd Covert. “We've got to execute better. Just one of those days. Gotta learn from it. Work hard. There’s no magic pill.”

Brother Rice (7-1) — Coach Rick Palmer sloughed off the lopsided loss to U of D Jesuit. “The guys just didn’t want to play,” he said.

That wasn’t the case against St. Mary’s before a full house. The Warriors went on a 10-1 run to forge a 20-20 halftime tie and led by as many as five points in the fourth quarter.

Hannah’s jumper tied the game at 41 with 2:04 to play. Williams responded with a basket to regain a 43-41 lead for Rice before Rozier re-tied the game with a pair of free throws.

The 6-foot-5 Williams, rated as one of the top juniors in the state, finished with 18 points and 12 rebounds. RJ Davis had 12 and Johnathan Blackwell 10.

McKenney led St. Mary’s with 17 points, followed by 12 by Rozier and 8 from Hannah.

“We came to play tonight,” Palmer said. “We think we’re as talented as anybody when we compete like that and trust each other like that. We can be as good as anybody.”

De La Salle (7-2) — About the loss to St. Mary’s, Pilots coach Gjon Djokaj said, “Whoever had the ball last was going to win the game. In regulation we finished with a rebound and the three-quarter court shot (by Michael Sulaka) was just short. We just missed in the first overtime, too. It was a classic game and I think both teams got better playing it.”

“It was just selfish basketball a little bit,” Djokaj said after the loss to Catholic Central. “Not sharing the ball. Not driving to create. It really wasn’t De La Salle basketball and what we’re all about, and they took advantage of it.

“We played hard in minimal stretches but to be honest, there’s not much good to say.”

“We’ve got to be better,” Djokaj said. “We didn’t play our best game. We’ve got to go back to the drawing board and have some great practices. It doesn’t get any easier moving forward.”

Packed houses — The gyms this writer visited at De La Salle and St. Mary’s each had 800-plus spectators. We presume that packed-house attendance is similar at the other three Central Division schools. At $5 a ticket, the schools’ athletic departments are enjoying a sizable boost for their bottom lines.

“I don’t miss coaching at all,” he said. “I made the right choice. I can watch my grandkids play.”

He remains involved with De La Salle as the director of advancement. “There are 12,664 alumni. I travel all over the country seeking their financial support. I can tell you one thing: they all love De La Salle.”

At the St. Mary’s-Brother Rice game, Stephanie Gonzales was watching the Eaglets play, something she has done hundreds of times.

This fall, she’ll be watching with more interest as her husband, Jermaine, was recently hired to succeed legendary George Porritt as head football coach and athletic director.

She feels her husband’s decision “naturally evolved” from his years of coaching at St. Mary’s as head JV coach for the last 13 seasons.

“He was always around,” she said. “It made sense. It feels like it’s his destiny.”

Jermaine, a 2000 St. Mary's grad, quarterbacked the Eaglets to the 1999 state championship. He played in 39 games over four seasons at Michigan as quarterback and wide receiver.