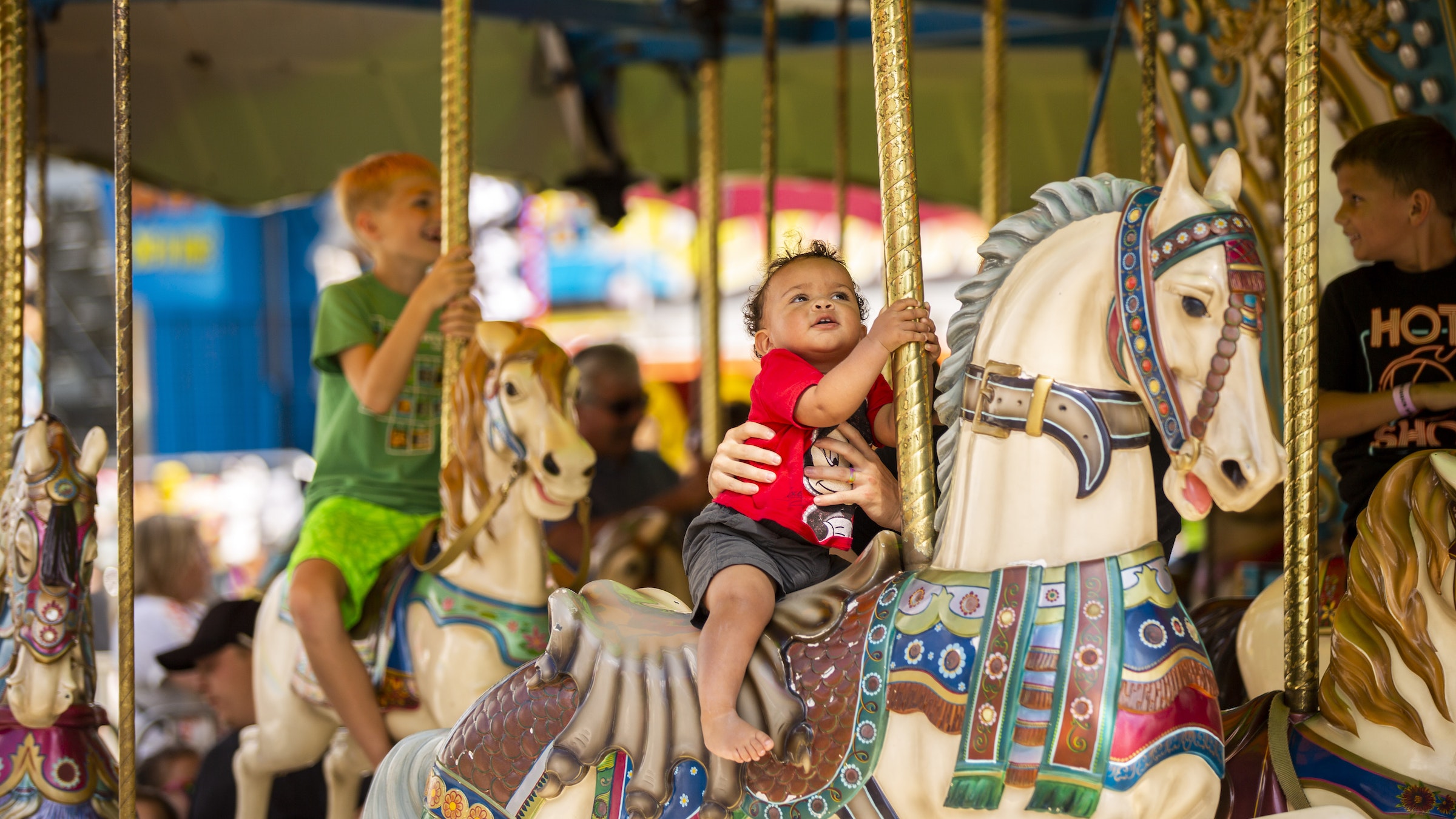 A child rides a carousel during the Armada Fair on Aug. 17 in Armada, a rural town in northern Macomb County. For years, volunteers from St. Mary Mystical Rose Parish have staffed the fair’s largest food booth. This year, the parish — with its newly appointed family of parishes, St. Augustine and Holy Family — is using its prime location to share Christ in a non-threatening, invitational manner. (James Silvestri | Special to Detroit Catholic)

St. Mary Mystical Rose has always staffed Armada Fair food booth; this year, its new family of parishes is serving up an extra helping of faith

ARMADA — Each summer, the small rural town of Armada hosts its annual fair, complete with cows and sheep, lemonade and elephant ears, rides, a demolition derby and a rodeo.

Many of those who have moved out of the northern Macomb County town return every year for the fair. Walking the streets, one gets the impression that everyone knows everyone else as they greet one another with smiles and familiar questions.

The town’s Catholic parish, St. Mary Mystical Rose, runs the largest food pavilion at the fair, and this year, St. Mary’s, along with its newly appointed family of parishes — St. Augustine in Richmond and Holy Family in nearby Memphis — added evangelization to the menu.

A short distance from the fairgrounds, St. Mary’s is a popular parking spot for fairgoers, who walk past the church in order to reach the fair’s entrance. Along the way, passersby are greeted by friendly parishioners offering rosaries, prayer cards, Miraculous Medals and an invitation to enter the small country church to light a candle and pray.

The church will remain open from 10 a.m. to 7 p.m. every day of the fair, which runs from Aug. 16-22. Fr. Steve Mateja said the intention is to be a welcoming presence to all without being overbearing or abrasive.

“We want to greet people at a basic entry-level, just letting them know who we are,” said Fr. Mateja, who ministers at St. Mary Mystical Rose. “A lot of people come from Armada or from outside Armada, and they park here because it is a big parking lot and it is accessible. We let them know that we are here and (that they can pray before) the Blessed Sacrament.”

As of Tuesday, Fr. Mateja said efforts had been successful, with more than 100 visitors taking advantage of the opportunity to pray inside the church –– including two young men who weren’t Catholic but responded to Fr. Mateja’s invitation to visit the church.

“When I was at the food booth, we were giving out free crucifixes and Miraculous Medals on chains, and one young man was putting the crucifix around his neck,” Fr. Mateja said. “I said, ‘Hey man, I blessed that,’ and he said, ‘Awesome, I am not even Catholic.’ I told him he should light a candle on his way back, and I saw him at the church (later on). He went in to pray, make an intention and to light a candle.”

In addition to being a great form of evangelization, Fr. Mateja said it’s an opportunity for the three parishes to come together as a family to serve the community. Posted in front of the parish were two tents, one run by St. Augustine’s Right to Life group and the other by a rotating set of volunteers from all three parishes who greeted and welcomed fairgoers.

Nancy Lemieux, of Holy Family Parish, was sitting outside for the second day in a row; she had originally volunteered for just an hour on Monday but felt compelled to stay longer.

Lemieux recalled an interaction with a woman who accepted an invitation to light a candle, telling Lemieux she “used to be Catholic.”

The Holy Spirit is working, Lemieux said, adding that people are curious about the faith, especially after a year of stresses and anxieties during the pandemic.

One never knows how a small seed will grow into a robust faith, said volunteer Patricia Grudzinski, from St. Mary Mystical Rose.

“We have to be outgoing,” Grudzinski said. “You never know how (a conversation) is going to grow once they leave and think about it. It might not necessarily bear fruit right now, but maybe down the line. You are just planting a seed. And it always grows.”