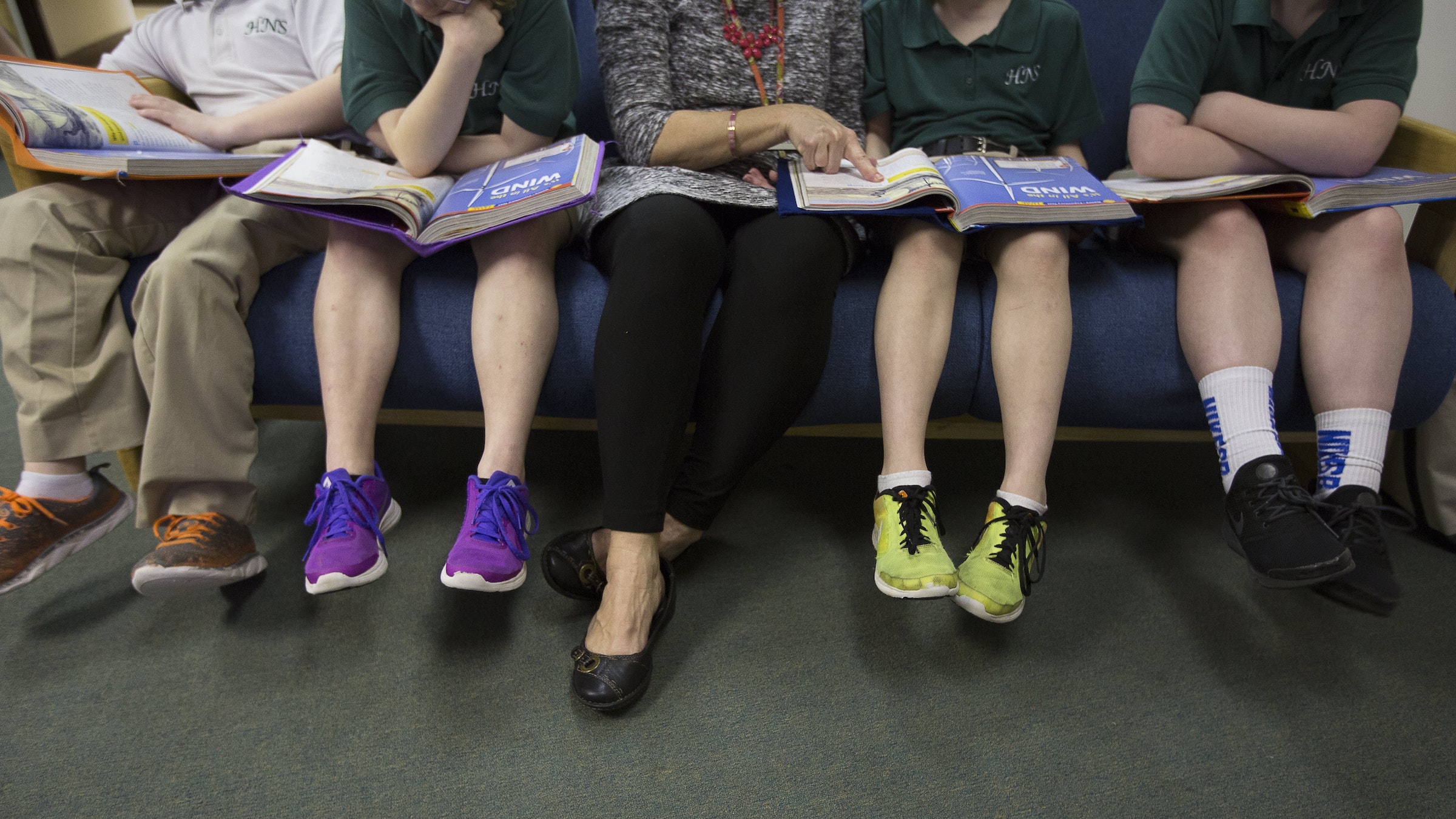 A teacher and students at a Catholic school are seen in this photo. The U.S. Supreme Court's ruling in Carson v. Makin June 21, 2022, could expand educational options for Catholic families across the country. In a 6-3 decision, the court sided with two Christian families who challenged a Maine tuition assistance program that excluded private religious schools. (CNS photo/Tyler Orsburn)

The 6-3 decision, handed down June 21, declared that a Maine tuition aid program that excluded religious schools was unconstitutional.

"I would say that this decision puts Missouri's Blaine Amendment in the dustbin of history," said Mike Hoey, retired executive director and longtime legislative specialist with the state Catholic conference, the public policy arm of Missouri's Catholic bishops.

He said the amendments were part of an attempt in the 1870s by U.S. Rep. James Blaine from Maine to stop any kind of aid to religious schools.

Hoey has extensively studied the history of anti-Catholic bias in the Missouri Constitution and is the author of "Missouri Education at the Crossroads: The Phelan Miscalculation and the Education Amendment of 1870," published in the Missouri Historical Review in July 2001.

"A number of states passed so-called Blaine Amendments in the 19th century and were motivated in large part by anti-Catholic bias, which was very prevalent in America at that time," he said.

People have defended such century-and-a-half-old amendments to state constitutions "as if they were an extension of the U.S. Constitution's First Amendment."

"That's a clear misreading of the First Amendment," he said.

He noted that there are two parts of the First Amendment's first phrase, which deals with religion: "Congress shall make no law respecting an establishment of religion" and "or prohibiting the free exercise thereof."

Hoey said the "no establishment" portion was a response to several of the former colonies that became the United States of America having their own established, state religions.

"For instance, in colonial Virginia, before there was a 'United States,' when the states were still just colonies, the Church of England was the established religion, and Virginia's colonial government subsidized the Anglican clergy," Hoey said.

That did not sit well with Virginia's Baptists and the smaller Protestant denominations.

"That's partly the reason they put 'no establishment of religion' in the Bill of Rights," Hoey said. "They didn't want a particular religion to be the official religion. They wanted people to have freedom to express their religious beliefs in whatever way they wished."

With that understanding, Carson v. Makin makes perfect sense, he told The Catholic Missourian, newspaper of the Diocese of Jefferson City.

"The court's decision is simply saying that if a public school system is going provide grants or vouchers to schools in the private sector, it cannot exclude private religious schools simply because they're religious," he said.

Excluding religious schools, but not other private schools, would amount to inhibiting the free expression of religion, in violation of the second part of the First Amendment's clause dealing with religion, he pointed out.

"If the public school system chooses to only fund public schools, they can do that, they're free to do that and that's their prerogative as a public body, as a government agency," he said.

"But if they're going to provide funding in the private sector, you can't single out religious schools as being not eligible simply because they're religiously affiliated," he added.

He called the decision "a big step forward."

Missouri has passed several laws in the past 10 to 15 years, expanding public education into the private sector, including charter schools and a rather limited voucher program.

"This ruling should open up some of those programs to religious schools," Hoey noted.

He said states could still set requirements for participating in such programs, as long as those requirements apply to all people who want to compete for those vouchers or grants and are not intrinsically biased against faith-based schools simply because they're faith-based.

"Catholic schools would have to look at those requirements and decide whether they want to participate or not," he added.

In the meantime, he said it might take a while for the court's intent in the Carson ruling to filter down to every state.

"There will probably be some pushback," he said. "It's going to take a little while for the import of this decision to sort of sink in. It may still be debated for a while."

"But if you're going to have any kind of voucher program," he stated, "especially one that goes to parents, the Supreme Court is saying you're not establishing religion by opening it up to religious schools; you're allowing the free expression of religion."

Hoey believes Missouri's current, fairly limited voucher program for parents who want to send their children to charter schools or to public schools in neighboring districts, would provide the best opportunity for parents seeking tax relief for sending their children to religious schools.

"As it is now with the ruling, if someone brings out legislation to start up a voucher or tax-credit program that includes public and private schools, no one will be able to argue that it's unconstitutional," he said.

"As long as the choice is in parents' hands, it's certainly an opportunity for the advocates of school choice, especially in the Catholic sector, to make sure Catholic schools are included in such a program," he added.