Despite pandemic protocols, University of Detroit-Mercy’s basketball teams press on 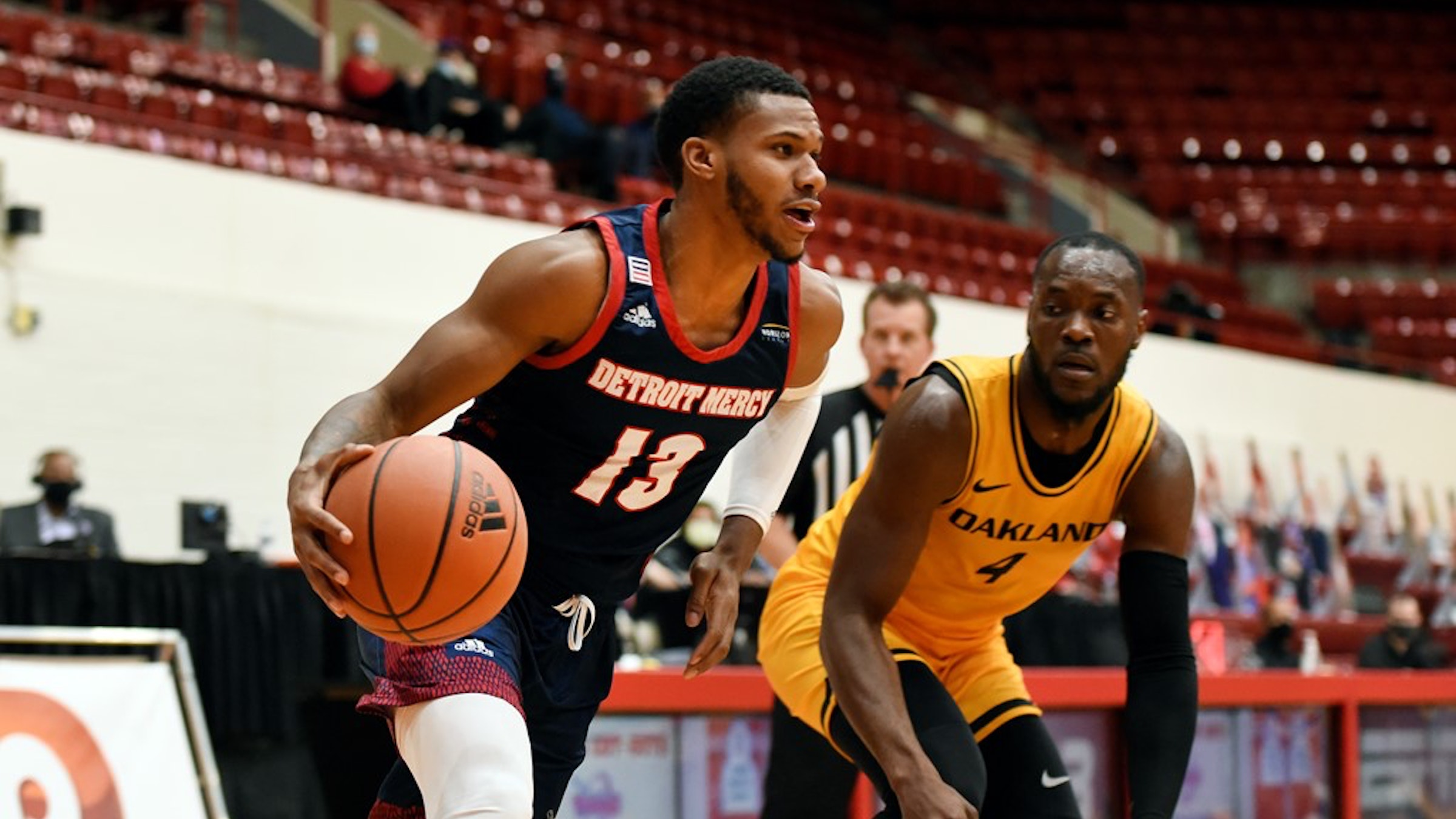 Matt Johnson seeks a route to the basket against Oakland’s Daniel Oladapo. The Golden Grizzlies won both of their “Metro Series” games against the Titans in come-from-behind fashion. (Photos Courtesy of Jose Juarez/Detroit Mercy Sports Information)

DETROIT — In past seasons, whenever the University of Detroit Mercy’s main Horizon League rival Oakland University came to town, Calihan Hall would get loud and raucous.

But last weekend, there was no noise coming from the “Section (313)” area of the bleachers normally packed by enthusiastic students. Instead, the couple dozen “spectators” attending the two-game basketball series were posed cut-out photos. Because of coronavirus concerns, fans won’t be attending games this season, so the only people in the stands were about 10 members of the media, viewing the action from Calihan’s upper bowl.

There was no pep band, no cheerleaders, no dance routines during timeouts, no concession stand. Outside, parking was abundant.

While the men’s and women’s basketball teams at University of Detroit Mercy deal with some unusual procedures, they are the first of the local Catholic college’s teams to engage in athletic contests this school year.

Schools are doing what they can to re-create that game-day atmosphere and keep their fans engaged from a distance. But without a packed house, the primary things that put these competitions a notch or two above open-gym scrimmages were the matching uniforms, an official scorebook, pre-game introductions with music and video, and live streams of the action going to both schools’ athletic websites and ESPN3.

The team benches were moved to the opposite sideline of the Dick Vitale Court, and they consisted of assigned seats spaced six feet apart. With the exception of the 10 players active on the court, everyone in the building was masked up — including those whose job it is to talk, such as broadcasters Earl Cureton and Jeremy Otto, and public address announcer Matt Rzepecki.

Unusual circumstances were responsible for the two men’s teams even meeting up last weekend.

Detroit Mercy was originally scheduled to host Indiana-Purdue-Indianapolis (IUPUI) while Oakland planned to welcome Northern Kentucky University. However, both schools’ opponents had documented COVID-19 cases last week, so Horizon League officials hastily arranged for the Titans and Golden Grizzlies to play each other. That decision was announced on Dec. 23, which didn’t leave either team much of an opportunity to prepare to play their arch-rival on the two days following Christmas.

Neither team’s head coach was in favor of the late schedule revisions. Oakland’s Greg Kampe was disappointed his team now played away from its home court, and Detroit Mercy’s Mike Davis was concerned that the referees in Oakland’s previous game had reportedly tested positive, potentially putting his players at risk.

But with all of the things that have been altered this season, there’s one that hasn’t changed: the level of intensity that occurs whenever the Titans and Grizzlies face each other on the hardwood. Both of the weekend’s “Metro Series” games went down to the wire.

Oakland took Saturday’s contest in overtime, 77-75, as the Titans failed to make a potential game-winner at both the end of regulation time and the end of overtime. Although Detroit Mercy led the entire first half, the teams were tied at 66 entering the extra session, when the Golden Grizzlies scored the first four points and led by as much as 75-68. Micah Parrish had the game-winning bucket for Oakland, which overcame a career-high 28 points from the Titans’ Bul Kuol.

On Sunday, when Antoine Davis swished a three-pointer from the top of the arc nine minutes into the contest to give the Titans a 24-10 lead, it appeared for a while that Detroit Mercy would break through to defeat Oakland for the first time in the last nine meetings.

But just as they had done the previous day, the Golden Grizzlies erased the deficit. Three minutes before the intermission, Zion Young’s fast-break lay-up gave Oakland a 37-35 lead.

The exciting second half featured six ties and eight lead changes, and the contest wasn’t decided until 1.4 seconds remained in the game, when Oakland’s Rashad Williams sank a three-pointer from the corner despite Titan defender Willy Isiani blocking his view. Williams’ triple accounted for the margin of victory in the 83-80 win.

“When it came down to it, Jalen Moore got the ball in the spot it was supposed to be, and Rashad made it,” Kampe said during a post-game Zoom teleconference. “Big-time players make big-time plays. You win because your players make plays.”

The weekend provided Oakland (2-9, 2-2 Horizon League) with its first two wins of the year. Detroit Mercy slumped to 1-7, 0-4, yet Davis remains optimistic his team will improve over time.

“We practiced only two days together (last week); we don’t know each other,” he said. “We’ve got some good pieces, maybe the best pieces we’ve had in a while. Any team is going to take some time to come together; it’s just a matter of getting better and getting used to each other.”

In the eight seasons that both schools have been Horizon League rivals, the Golden Grizzlies have won 12 of the 14 head-to-head matchups, and the last seven at Calihan Hall. Tentatively, the teams will meet again for another back-to-back series Jan. 22-23 at Oakland University’s O’Rena.