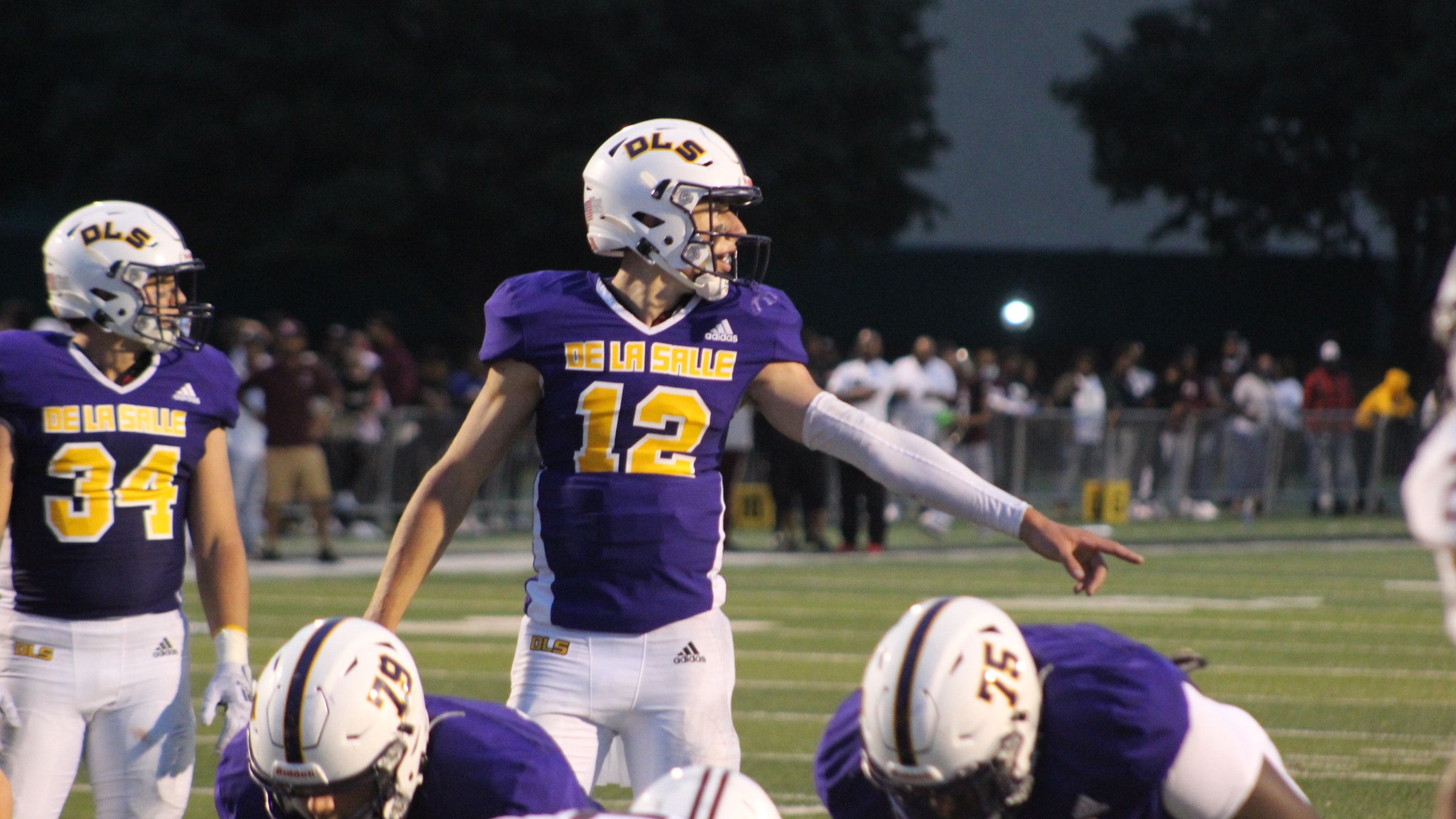 WARREN — “It was a crazy week,” Warren De La Salle quarterback Brady Drogosh said following the Pilots’ 38-29 victory over River Rouge Sept. 3. “We watched film before school, after school; I personally met with the coaches on my lunch hour to get ready, and the coaches did a great job getting us ready for this week.”

That’s what a Catholic League football player has to deal with when a game — in this case, a game against a team that reached the state finals in the past two seasons — materializes just 72 hours before kickoff.

Both De La Salle and Rouge suddenly found themselves without a “week two” contest when each school’s originally scheduled opponent dropped out just days before they were supposed to play. River Rouge couldn’t play Detroit Renaissance, which had a dozen positive COVID-19 tests, and De La Salle’s foe, Detroit Denby, was searching for a new head coach.

“We lost our opponent last Friday (Aug. 27) and they lost theirs Tuesday,” Pilots coach Dan Rohn said. “Somebody else from Illinois (Peoria High School) was scheduled to play us as of Tuesday at noon, and they backed out at 1 o’clock, we ended up picking up Rouge.”

Rohn, who is also the De La Salle athletic director, and River Rouge coach and AD Corey Parker agreed to meet on the field rather than take a week off, and the result was a highly competitive, entertaining game before a packed house at Wayne State University’s Tom Adams Field.

“Corey and I have known each other, we’ve worked together for a long time, we’ve played against each other in a state championship in I think 2014 or 2015, so we just hooked up on the phone and we did the right thing for the kids, gave them an opportunity to play another game,” Rohn said. “We know we’re going to play great competition all year long, especially in our league, so it’s nice to come out here and get tested early in the season against an extremely athletic, well-coached football team.”

“Both schools could have just taken a forfeit, but they found a good opponent and went and played them. I think that’s a product of some good administration,” Catholic League director Vic Michaels said. “Everybody knows how tough it is to schedule football games. We had hoped that the new MHSAA strength-of-schedule playoff scheme would have helped because that rewards teams for playing better opponents, but it hasn’t yet helped the big Catholic League teams, and really, all the good football teams out there.”

Things may have worked out well for De La Salle on Sept. 3, but the Pilots had an even tougher time this week. They had originally scheduled a contest against Cincinnati Dohn, but MHSAA officials would not recognize that game since Dohn was not a member of the Ohio High School Athletic Association. As of Thursday, a make-up game against a different school had yet to be announced on the team’s website.

That decision also affected Bloomfield Hills Brother Rice, which was scheduled to play Dohn in the season’s seventh week, on Oct. 8. The Warriors have since found a replacement opponent in Chicago Christ the King Jesuit, but that wasn’t easy, coach Adam Korzeniewski said.

“I think when you look on paper, nobody’s schedule is tougher than ours,” he said. “We played (Macomb) Dakota, the largest school in the state; we played East Kentwood, the third-largest school; we play University of Detroit-Jesuit from Division 2; we play Traverse City Central, a Division 2 state semi-finalist; we play Country Day, the Division 4 state champion.”

“I don’t think everyone’s buying in,” he said. “I was very aggressive on Twitter. I asked, ‘Would someone please schedule up, like we do?’ Why would we have teams not jumping at that opportunity? We have a system that is broken, not enough people want to take a risk and play a tough opponent because it might hurt their ability to get into the playoffs.”

The larger Catholic League schools have long been at a disadvantage when it comes to finding suitable opponents in football. Each of the four Central Division schools — De La Salle, Brother Rice, Detroit Catholic Central and Orchard Lake St. Mary’s — are each playing at least one opponent from a neighboring state this fall. That’s risky, since COVID-19 still has a presence and might necessitate travel restrictions for the visiting teams.

“I think it shows that we need more teams in our league, and we need to change the playoff format in order to play more (regular-season) games like this,” Rohn said following the win against River Rouge. “It’s tough, because we beat each other up, and it’s going to put us in a position where we’re going to struggle at points unless we go and do it. I think it says a lot about where this area of football is, there’s a lot of great competition and a lot of great games.”

There is movement under way to bring several Catholic high schools from Toledo into Detroit’s Catholic League, and it could happen by 2023. While Catholic League officials strongly approved the concept in a voice vote last month, the plan will be introduced to the Catholic League Executive Board on Tuesday (Sept. 14). There is no action taken to be scheduled at the upcoming meeting.

“When we do add the Toledo schools — and I think that’s going to happen — that will fill a lot of the voids, especially with our Central Division,” Michaels said. “It’s a win-win, but some things still need to fall into place.”

Until the league expands, though, Catholic League football teams have no choice but to schedule any competition they can locate — often at the 11th hour.

“Our coaches will grind it out and see what we can find on the schedule, because we want to play games,” Rohn said. “We want to give our teams an opportunity to compete.”