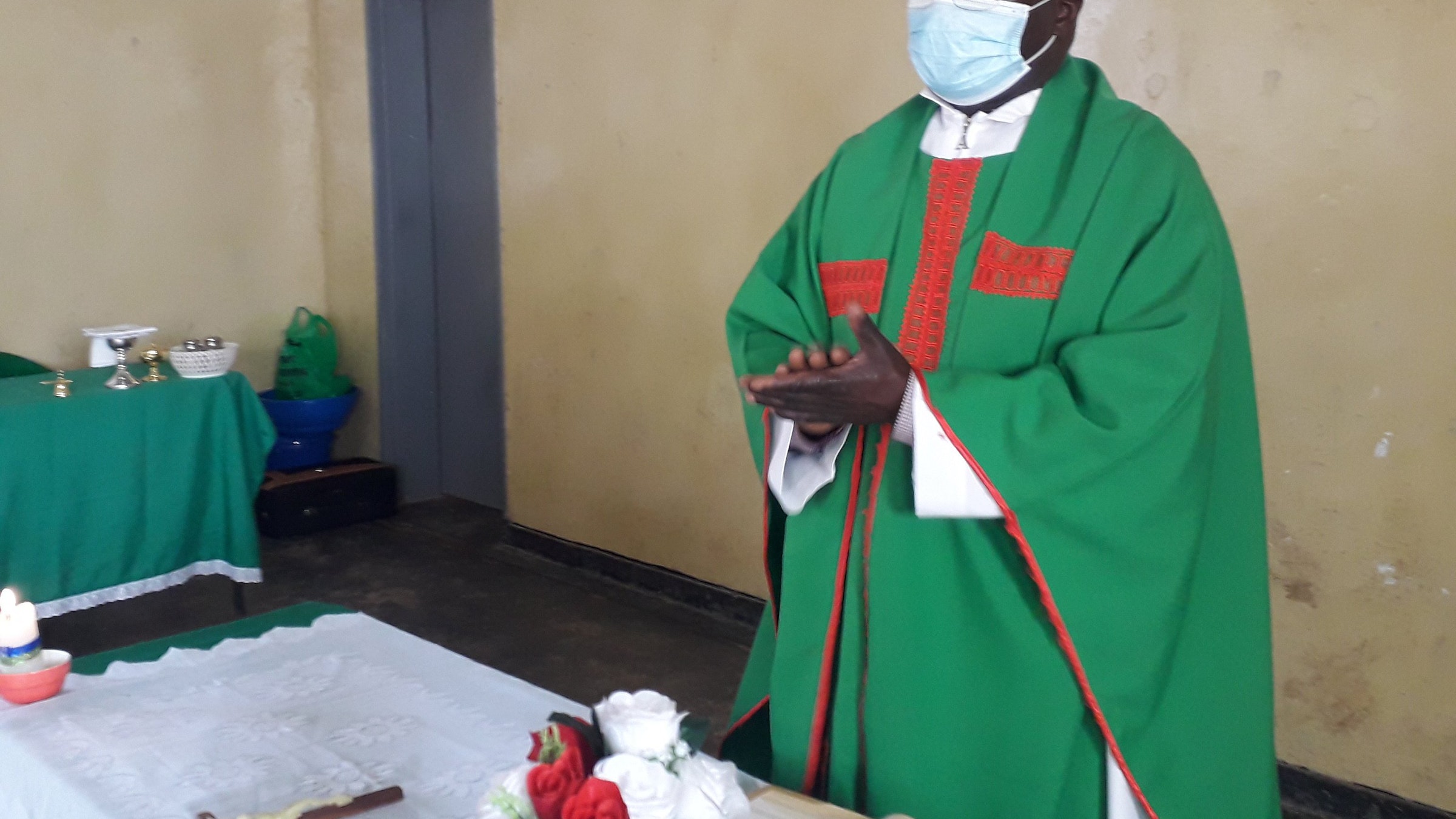 Father John Benjamin Moyo, a parish priest at St. Peter's Cathedral in Mzuzu, Malawi, celebrates Mass Aug. 13, 2021, in St. John's health institute college, which is attached to the hospital that now has an isolation center where people infected with COVID-19 can be treated. (CNS photo/Agnes Manda)

MZUZU, Malawi (CNS) -- After recovering from COVID-19, a 64-year-old diabetic priest in a town in northern Malawi set up a center to help others avoid his own plight.

"I would never have survived (COVID-19) if my cousin hadn't been a doctor and able to help me," Father John Benjamin Moyo, parish priest of St. Peter's Cathedral in Mzuzu, told Catholic News Service.

"I thought I must have malaria," he said, noting that he has had the life-threatening disease many times.

"We've learned to live with it here," he said. Malaria spreads to humans through the bites of infected mosquitoes.

When he tested negative for malaria at St. John of God hospital, next to the cathedral parish house where he lives, Father Moyo was treated for an infection.

"But I felt strange and so weak," he said. "And, while I didn't have a fever, everything was so painful -- even my eyes hurt." He realized he must have COVID-19, and a test confirmed this.

While his oxygen and blood-sugar levels showed that he needed hospitalization, he had nowhere to go. St. John's had no isolation section, and the town's government hospital, which was set up to treat COVID-19 patients, was full.

In bed at home for seven days, "I would sleep as though I was dying," Father Moyo said. "I was so helpless and I knew that, with diabetes, this was very dangerous for me. I also knew many people had died -- so I felt this might be the end for me, too.”

Father Moyo called his cousin, who is a doctor and runs a busy clinic about three miles from the priest's house. "He heard me gasping for breath and said, 'Come here and stay with me.'”

After receiving oxygen for a few days in a room that his cousin prepared for him in the clinic, Father Moyo began to feel better and returned home. His place with his cousin was quickly taken by others in a similar position.

"I realized the enormous need and was very aware of my privilege through my cousin," Father Moyo said.

With this in mind and with Mzuzu Bishop John A. Ryan's backing, he raised funds through friends in Germany to start a COVID-19 center within St John's hospital.

The center opened in January and by mid-August had treated 66 critically ill people, Father Moyo said, noting that, of these, 54 have recovered. Six people died and another six are still receiving treatment.

"It's small, but it's made a huge difference," he said, noting that funds are still needed for more oxygen supplies and medicine.

Catholic Relief Services and Malawi's Catholic health commission are working with the southeast African country's health ministry to get vaccines to people in remote areas, said Molly Kumwenda, who works for CRS in the capital, Lilongwe.

Kumwenda said that at least 728,700 vaccines have been administered in Malawi since rollout began in late March.

"We go into communities so that people can be vaccinated close to where they live," rather than travel 10 miles to the nearest clinic, she told CNS.

"It's much easier to persuade people to be vaccinated when they can walk to get it done," said Colyta Muwowo, a member of St. Augustine Parish in Mzuzu and a community volunteer.