Doggone it: When a papal point misses the mark 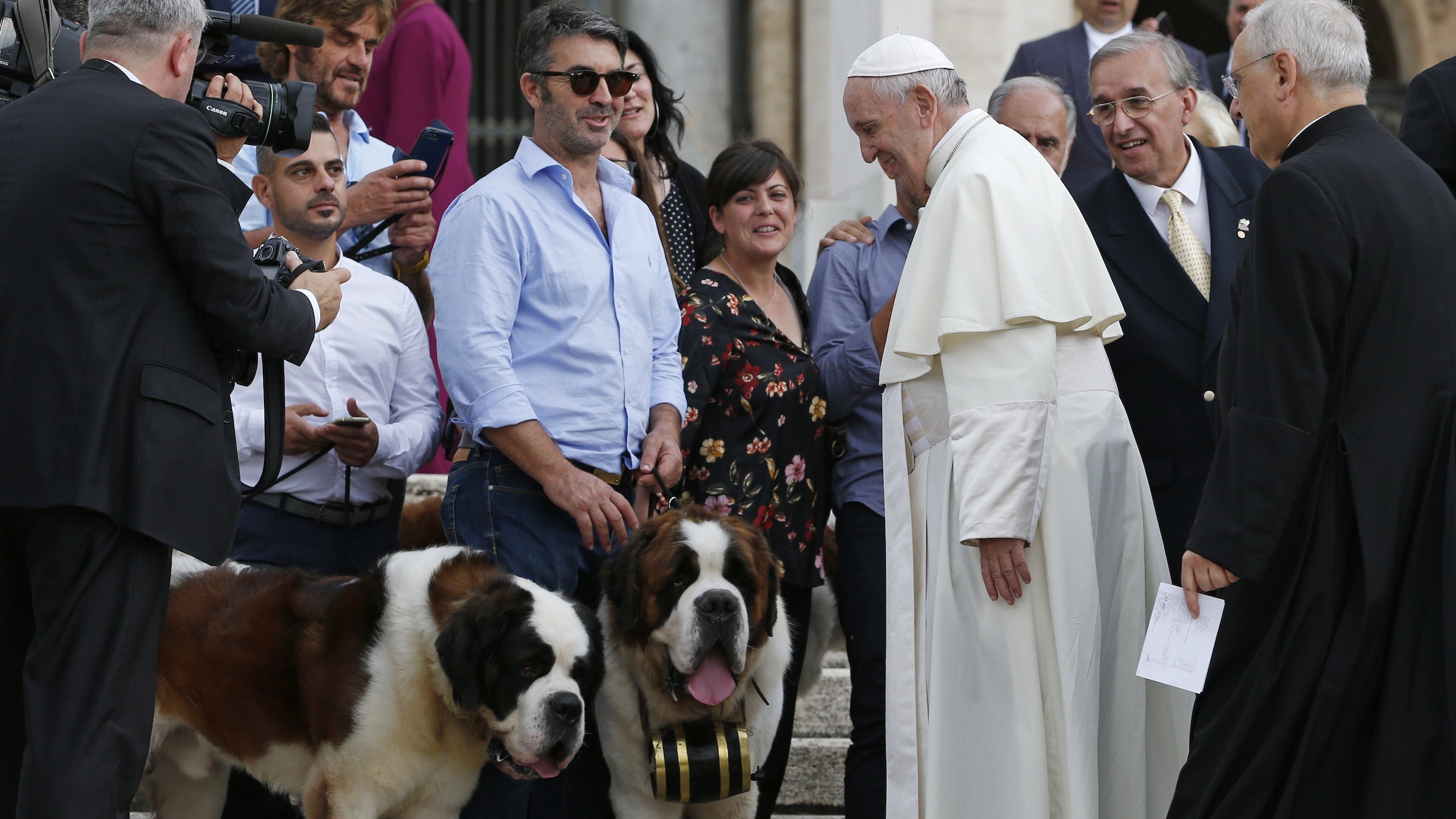 Pope Francis greets dog owners during his general audience in St. Peter's Square at the Vatican in this Sept. 19, 2018, file photo. The pope is in the doghouse with some pet lovers over recent comments about some couples preferring to have pets rather than children. (CNS photo/Paul Haring)

VATICAN CITY (CNS) ─ Context is everything. But sometimes Pope Francis assumes people know him and the context of his words.

When they don't, hackles are raised.

One case in point has garnered huge publicity, again: Pope Francis' view on couples having pampered pets instead of children.

The nervous laughter in the Vatican audience hall Jan. 5 should have tipped him off that he was heading for a mishap.

Speaking at his general audience about the importance of parenthood, both literal and spiritual, Pope Francis again brought up his concern about a "demographic winter," especially in Europe, where birthrates are consistently below death rates.

The pope spoke about the suffering of couples who cannot have children and about the bravery of those who choose to adopt.

But what stuck in many people's craw was when he said that "many couples do not have children because they do not want to, or they have just one -- but they have two dogs, two cats. Yes, dogs and cats take the place of children."

When people laughed, he responded, "Yes, it's funny, I understand, but it is the reality. But this denial of fatherhood or motherhood diminishes us, it takes away our humanity."

In his audience talk and when discussing the "demographic winter" Dec. 26, the feast of the Holy Family, Pope Francis mentioned the practical problems declining birthrates have for a nation, especially when it does not have enough young workers paying taxes to support the pensions and health care of the elderly.

The issue has long been a concern for Pope Francis, who has made it clear he does not believe Catholic couples need to have as many children as possible, but he does believe countries and companies should enact policies that make it possible for couples to have the children they long for.

But the idea of some couples being selfish has been part of his discourse, too. In fact, in "Fratelli Tutti" in 2020, he wrote, "a decline in the birthrate, which leads to an aging of the population, together with the relegation of the elderly to a sad and lonely existence, is a subtle way of stating that it is all about us, that our individual concerns are the only thing that matters."

And, seeming to pick on those who would rather dote on their dogs or cats is not new for him either.

The fur also flew in June 2014 after Pope Francis preached at an early morning Mass in the chapel of his residence with couples celebrating big wedding anniversaries.

Again, he spoke of the pain of couples unable to have children and of the suffering of parents whose child is ill. But that didn't cause alarm.

According to the Vatican newspaper, the pope told the couples that "Jesus does not like marriages in which couples do not want children, in which they want to remain fruitless," who think "not having children is better, this way you can travel and see the world, you can have a house in the country and relax!"

Such a culture, the newspaper quoted the pope as saying, suggests "it is more comfortable to have a little dog and two cats" to love, but at end of such a marriage, "old age arrives in solitude, with the bitterness of awful loneliness: it is fruitless."

Speaking to reporters returning to Rome with him from Panama in 2019, he said he saw something there that he didn't see in Europe. "They hold up their children and say, 'This is my victory, this is my future, this is my pride!' In the demographic winter we are experiencing in Europe -- below zero in Italy -- this should make us think: What is my pride? Tourism, a villa, a small dog or raising a child?"

Still, he has praised some attention to pets, like at the chrism Mass in 2020 when he lauded priests who are so close to their people that they even know their dogs' names.