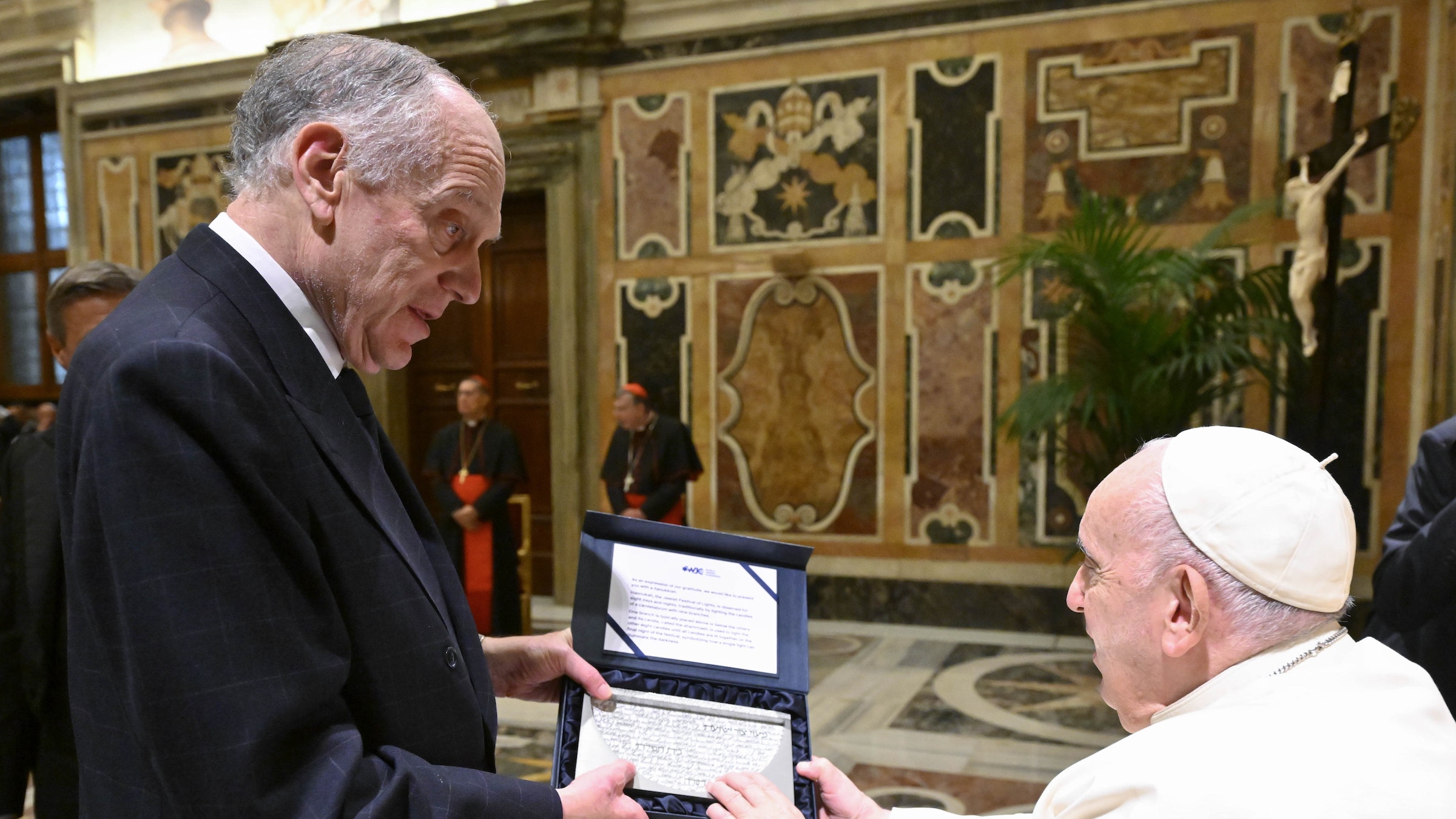 Ronald S. Lauder, president of the World Jewish Congress, gives Pope Francis a gift during an audience in the Clementine Hall of the Apostolic Palace at the Vatican Nov. 22, 2022. (CNS photo/Vatican Media)

VATICAN CITY (CNS) -- Christians and Jews are called to give witness to their faith by "working to make the world more fraternal, combating forms of inequality and promoting greater justice," Pope Francis told members of the World Jewish Congress.

"Together we recognize that war, every war, is always and everywhere a defeat for all humanity," the pope told the group Nov. 22. "Think of the conflict in Ukraine, a sacrilegious war that threatens Jews and Christians alike, depriving them of their loved ones, their homes, their property and their very lives!"

Before meeting the pope, the executive committee of the congress held a special session with Vatican officials and diplomats accredited to the Holy See. The gathering focused on strengthening the bonds between the Vatican and the congress, which represents Jewish communities in more than 100 countries.

Pope Francis said their visit itself "testifies to and strengthens the bonds of friendship uniting us" and builds on more than 50 years of official dialogue since the Second Vatican Council.

Catholics and Jews, he said, have learned to recognize that they "share priceless spiritual treasures," beginning from faith in the one God who made heaven and earth, "who not only created humanity, but forms every human being in his own image and likeness."

Together "we believe that the Almighty has not remained distant from his creation, but has revealed himself, not communicating only with an isolated few, but addressing us as a people," the pope said. And "through faith and the reading of the Scriptures handed down in our religious traditions, we can enter into a relationship with him and cooperate with his providential will."

Christians and Jews also believe that life is not a journey "toward nothingness, but toward an encounter with the Most High who cares for us" and who has promised, "at the end of time, an eternal kingdom of peace, where everything that is a threat to human life and coexistence will come to an end," the pope said.

Believing that violence, oppression and exploitation will not have the last word, he said, Christians and Jews not only live in hope, but they know they are called to do what they can to make God's plan for the world a reality.

The challenge is great, the pope told congress members.

"How many human beings, created in the image and likeness of God, are violated in their dignity as the result of the injustice that racks our world and represents the underlying cause of so many conflicts, the swamp that breeds wars and violence!"

"The one who created all things with order and harmony urges us to cleanse this swamp of injustice that engulfs fraternal coexistence in the world," the pope said.

"As Jews and Christians," he said, "let us seek to do all that is humanly possible in order to put an end to war and to pave paths of peace."