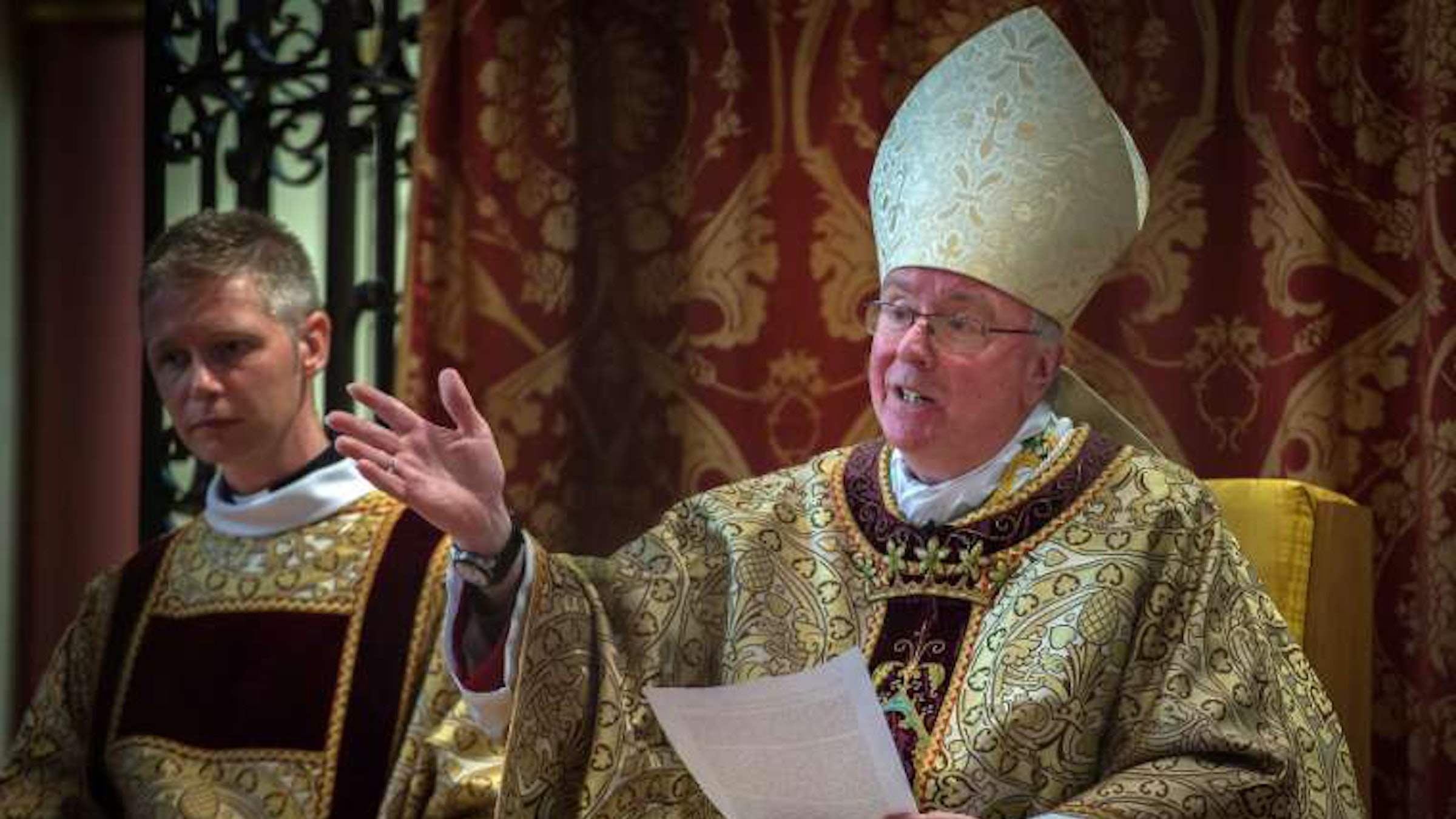 Bishop Philip Egan of Portsmouth, England, is pictured May 21, 2015. Bishop Egan said March 16 he believed he had a duty to speak out about the German Church’s “Synodal Way,” which he said would lead to a “de facto schism.” (Mazur/cbcew.org.uk)

PORTSMOUTH, England (CNA) -- An English Catholic bishop said on Tuesday that he feared that the German Church’s “Synodal Way” would lead to a “de facto schism.”

Bishop Philip Egan of Portsmouth told CNA on March 16 that he believed he had a duty to speak out about the multi-year process bringing together German lay people and bishops to discuss four major topics: the way power is exercised in the Church; sexual morality; the priesthood; and the role of women.

He said: “As a bishop, I have a responsibility not just for the Church in this diocese but for the universal Church. I have German friends and like me, they have been concerned with the Synodal Way and its process for some time.”

“The manner in which it is set up will inevitably lead to conclusions that compromise and collide with the Church’s Tradition.”

Bishop Egan, who has led his southern English diocese since 2012, clarified that he was not opposed to the discussion of the “hot-button issues” chosen by the Synodal Way’s organizers.

“But a properly Catholic methodology is needed for such a discussion to take place,” he said. “This would lay down clearly the doctrinal parameters and make clear the meaning and value of those doctrines for people today.”

Germany’s Catholic bishops are overseeing the Synodal Way -- also known as the Synodal Path -- in partnership with the Central Committee of German Catholics (ZdK), an influential lay body.

The Synodal Way’s working groups are preparing proposals for reform on matters of Church teaching and discipline on marriage, ordination, clerical celibacy, and sexual ethics.

Organizers initially said that the process would result in “binding” decisions, prompting a Vatican intervention.

A handful of German bishops have raised concerns publicly about the process.

Cardinal Rainer Maria Woelki of Cologne said last September that the worst outcome would be if the Synodal Way “leads to a split and thereby outside of the Church, out of communion with the universal Church.”

In an interview with the German Catholic news agency KNA, the cardinal said he worried that this would create “something like a German national church.”

Bishop Rudolf Voderholzer of Regensburg has criticized the Synodal Way’s procedures, accusing organizers of a lack of transparency.

Bishop Egan told CNA: “My worry is that we are very close to the point of no return with this Synodal Way -- when bishops and people will be promoting positions at variance with the universal magisterium and the Church’s discipline e.g. the ordination of women, intercommunion, etc.”

“This will lead to a de facto schism that will be very difficult (and theologically complex) to repair.”

Synodal Way organizers have repeatedly rejected claims that the process will lead to a split in the Church.

Responding to Cardinal Woelki’s comments last September, Bishop Georg Bätzing, president of the German bishops’ conference, insisted that the Church in Germany is “part of the Universal Church and nothing will change that.”

Bishop Bätzing has expressed hope that the results of the Synodal Way will be discussed by the worldwide Church.

In a May 2020 interview, he said he was “very much in favor of transporting to Rome, to the level of the whole Church, the insights and decisions that we garner from the synodal process.”

Bishop Egan first expressed his misgivings about the Synodal Way publicly on March 14.

Writing on his Twitter account, he said: “Rome should intervene in the German Synodal Way before it’s too late. It’s right to work through hot-button issues but at the same time Rome should reassert the doctrinal parameters, insisting that German Catholics look outwards to service and mission.”

Asked if he was calling for the Vatican to stop the Synodal Way entirely, he told CNA: “The ultimate weapon of course would be for Rome to ask the German bishops to close it down. I am not sure they would heed this.”

Referring to the Vatican Congregation for the Doctrine of the Faith’s rejection of same-sex blessings on March 15, he said: “Instead, it would be better for Rome to reassert clearly the doctrinal parameters, as in yesterday’s CDF statement about same-sex unions.”

“The pope himself needs to intervene by giving authoritative teaching: this is the role of the Petrine ministry. He should also summon the German bishops to Rome and lay down more clearly for them an appropriate methodology.”

Bishop Egan suggested that Pope Francis could also discuss the future of the church tax system with Germany’s bishops.

If an individual is registered as a Catholic in Germany, 8-9% of their income tax goes to the Church. The only way they can stop paying the tax -- known in German as “Kirchensteuer” -- is to make an official declaration renouncing their membership. They are then no longer allowed to receive the sacraments or a Catholic burial.

The Church in Germany received more money in church tax than ever before in 2019 despite losing a record number of members.

“The pope might also be minded to discuss with the German bishops whether it is still culturally appropriate to receive the Kirchensteuer, which last year netted $7.5 billion,” Bishop Egan said.