'Extreme' ballot proposal would mean 'anything goes' on abortion in Michigan, MCC says 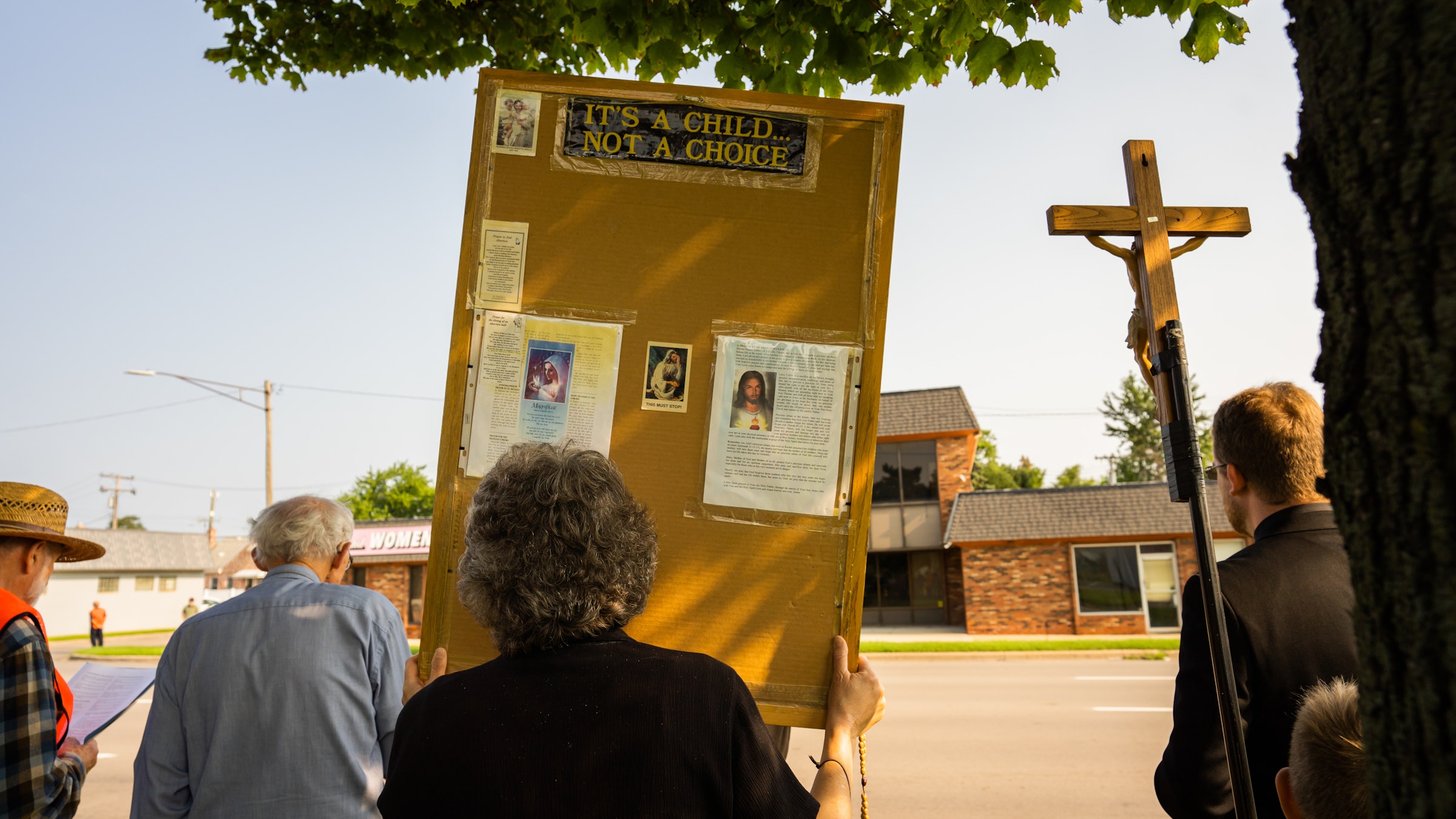 Catholics hold signs and a crucifix as they pray in front of an abortion clinic on Eight Mile Road in Eastpointe in August 2021. The Michigan Catholic Conference is urging Catholics and all people of good will to oppose a petition drive that seeks to enshrine a right to abortion into the state constitution, effectively overturning every existing pro-life law in the state. (Valaurian Waller | Detroit Catholic)

LANSING — Pro-life advocates across the state have formed a ballot question committee to oppose a proposed constitutional amendment they say would lead to an "anything goes" approach to abortion laws in the state.

The campaign, called Citizens to Support MI Women and Children, describes the Reproductive Freedom for All constitutional amendment as a “poorly worded amendment” that would repeal dozens of state laws, including Michigan’s ban on tax-funded abortions, a ban on partial-birth abortion, and parental consent laws for underage minors.

“We are trying to educate Michigan citizens to not sign this petition, and if it gets on the ballot, we urge people not to vote in favor of it,” Christen Pollo, spokeswoman for Citizens to Support MI Women and Children, told Detroit Catholic. “This proposal is very dangerous for women and the unborn. Even people who are pro-choice should reject this proposal because of how far-reaching it is.”

The Archdiocese of Detroit's Department of Evangelization and Missionary Discipleship's Office of Evangelical Charity and Office for Respect for Life have released a communication to parishes and schools urging Catholics to decline to sign the petition.

The proposed amendment needs 425,059 valid signatures submitted to the Michigan Board of State Canvassers by July 11 to be put on the ballot for the Nov. 8 general election.

Michigan Catholic Conference president Paul Long called the proposed amendment "extreme" and said the conference is working with partners across to the state to educate the public about the dangers of the proposed law.

“This is an historic occasion for the pro-life community and indeed all people in Michigan to oppose such an extreme amendment to the state constitution,” Long said. “We are eager to engage with all people of goodwill to clarify how dangerous this proposal is for the unborn children, vulnerable women and families.”

Michigan has laws banning abortion dating back to 1846. The current law prohibiting abortion was amended in 1931 and was upheld by Michigan voters in 1972. The law was superseded by the 1973 Roe v. Wade U.S. Supreme Court decision.

After a leaked draft opinion May 2 suggested the court may overturn Roe in the coming weeks — thus reverting to Michigan's 1931 law — Michigan Gov. Gretchen Whitmer filed a lawsuit in Oakland County Circuit Court, Michigan’s Court of Claims, and the state Supreme Court asking to overturn the 1931 law.

“In the courtroom and at the ballot box, human life in Michigan is being threatened by the most extremist abortion advocates this state has witnessed,” Long said. “Together with our coalition partners, we vow to work with diligence — guided by prayer — to uphold the sanctity of life in Michigan and to ensure every vulnerable mother has access to the support and compassion she needs to care for herself and her child.”

Pollo encouraged people to read the full text of the Reproductive Freedom for All amendment, which she said would affect as many as 47 different state laws, including parental consent for children’s medical treatment that involves sex or pregnancy, bas on school employees helping children have abortion, Michigan’s partial-birth abortion ban, the Born-Alive Infant Protection Act, conscience protections for doctors and nurses who object to performing abortions and the requirement that only doctors perform abortions.

“The full text of the amendment says anyone involved in an abortion would be indemnified if something were to go wrong, and that’s where we can infer health and safety standards would be taken away,” Pollo said. “People wouldn’t be held responsible if someone botched an abortion and it led to a woman’s death.”

Pollo encourages people to visit supportmiwomenandchildren.org to sign up for updates and to access campaign materials to teach voters about the consequences of the proposed amendment.

Besides the vague wording, the fact it would become a constitutional amendment — as opposed to a piece of legislature that can be amended through the law-making process — is reason enough to reject the ballot proposal, Pollo added.

“Even people who are pro-choice typically do not support legalized abortion through all nine months of pregnancy,” Pollo said. “They also aren’t likely to support an unregulated and unrestricted right to abortion for minors. This proposed amendment would actually create a reproductive right starting at the moment of birth, which repeals Michigan’s parental consent law and would allow for a school administrator to take a child to have an abortion without the parent’s knowledge.

“Whether you are pro-life or pro-choice, any surgery requires parental consent, so why should abortion be any different?”