Five ordained transitional deacons for Detroit, on track for priesthood in 2023 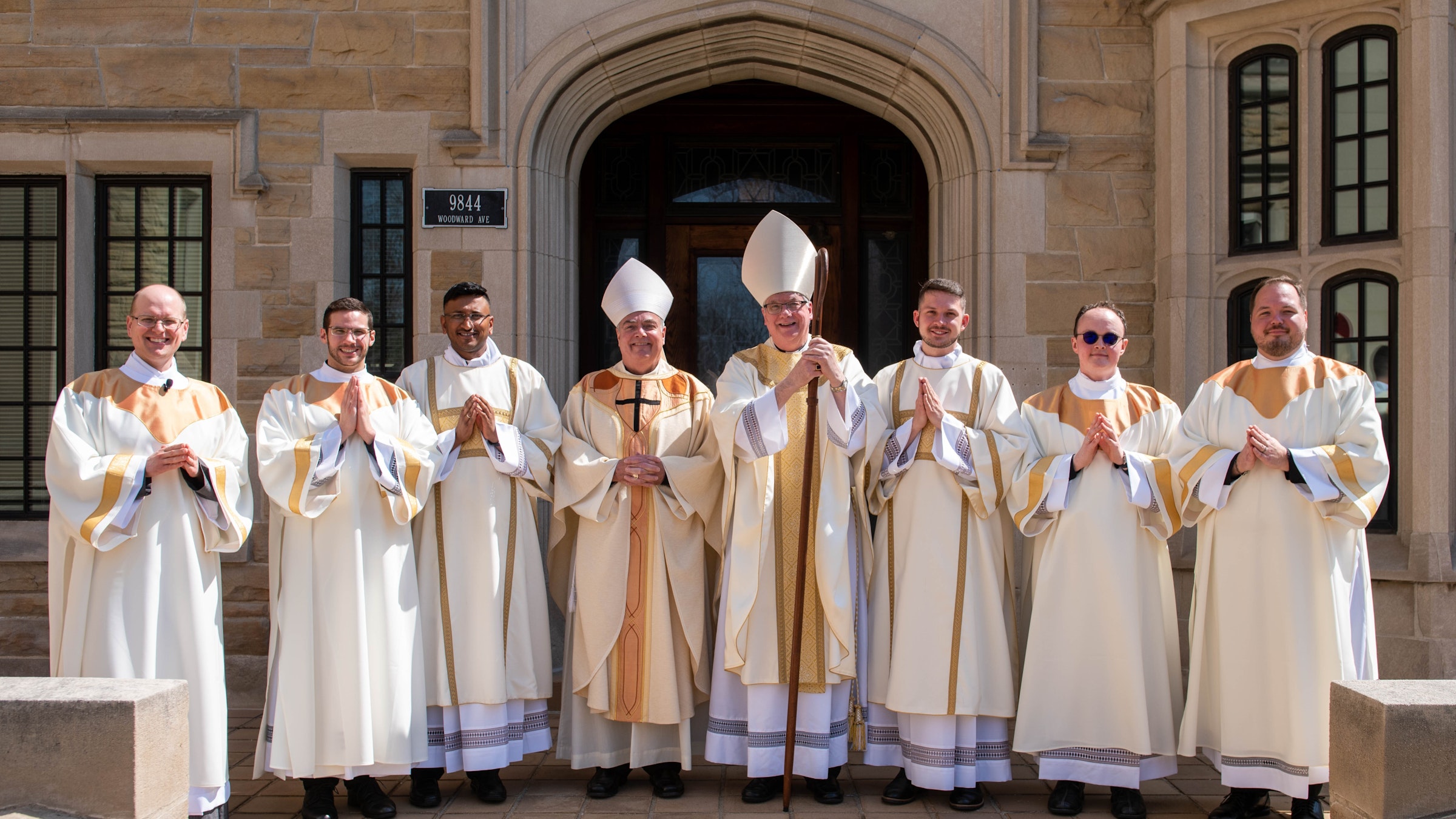 Bishop Battersby ordains five seminarians for Archdiocese of Detroit, one for Society of Our Lady of the Most Holy Trinity on April 23

DETROIT — Auxiliary Bishop Gerard W. Battersby ordained five seminarians to the transitional diaconate for the Archdiocese of Detroit on April 23, setting the stage for the newly ordained men to become priests in 2023.

Bishop Battersby ordained Deacons Richard Dorsch Jr., Jeremy Schupbach, Michael Bruno Selvaraj, Andrew Smith and Ryan Walters at the Cathedral of the Most Blessed Sacrament before friends and family. All five will be entering their final year of theology studies at Sacred Heart Major Seminary next year.

Bishop Battersby also ordained Deacon David Snow, a seminarian studying at Sacred Heart for the Society of Our Lady of the Most Holy Trinity (SOLT).

During his homily, Bishop Battersby told the newly ordained that their new ministry is not a reflection of their own worthiness, but rather the power of Jesus working through them.

“As fantastic as it may seem, God wants to make you like his son, Jesus — to make you by grace who Jesus is by nature,” Bishop Battersby told the six new deacons, who will serve in parishes during weekends while they complete their studies. 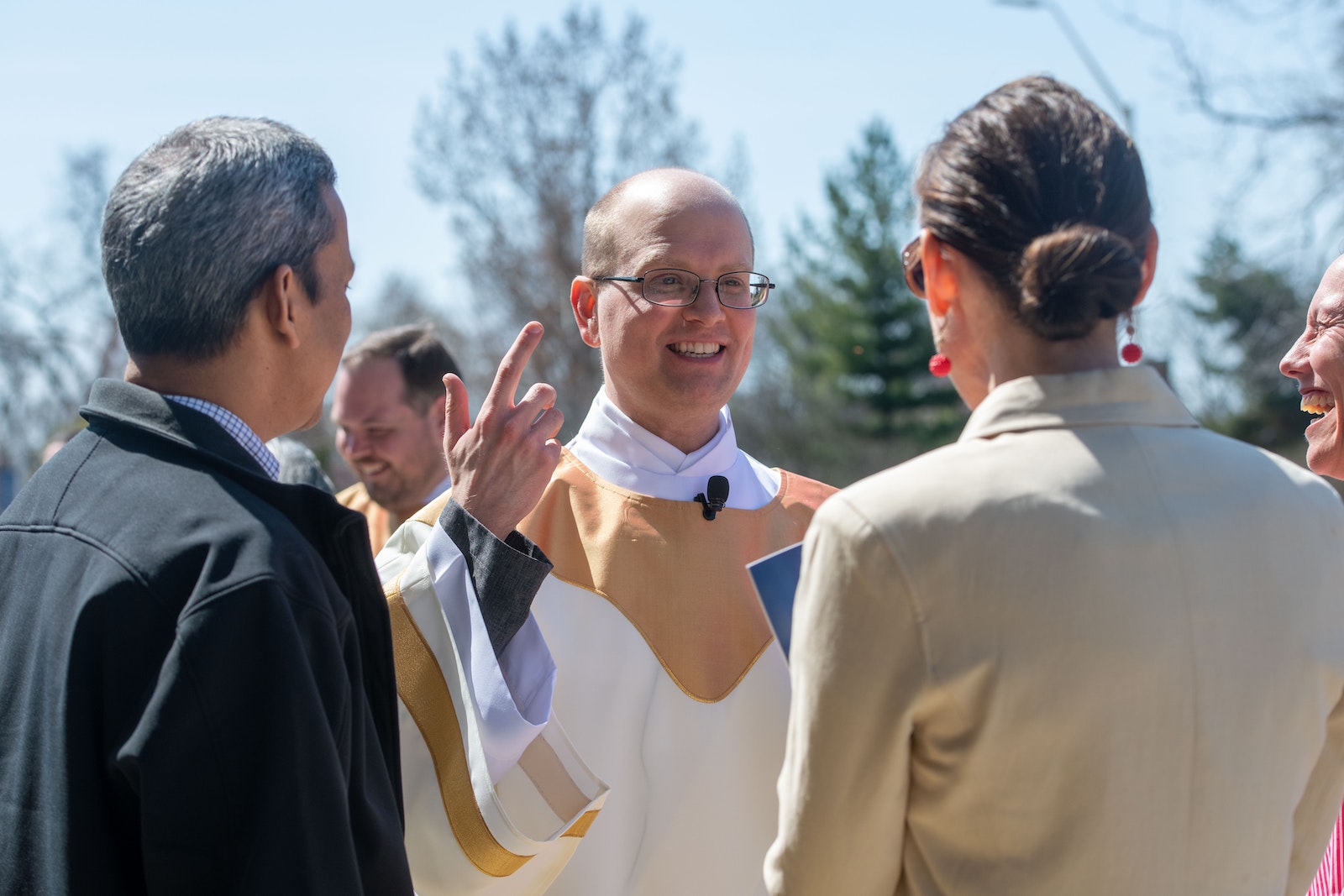 Deacon David Snow, SOLT, greets well-wishers after Mass on April 23 when he and five other seminarians were ordained to the transitional diaconate. Deacon Snow was ordained for his order, the Society of Our Lady of the Most Holy Trinity.

The news of five new transitional deacons for the Archdiocese of Detroit comes just days after Archbishop Allen H. Vigneron announced during the Chrism Mass that the archdiocese would not ordain any new priests in 2022 — the first time in more than 70 years that no presbyteral ordinations would take place.

Instead, the archbishop announced a Year of Prayer for Priestly Vocations, which will begin with a holy hour on the vigil of Pentecost, June 4, when ordinations typically would take place.

Besides the five new deacons, 17 other men are currently in some stage of formation for holy orders for the archdiocese.

Deacon Dorsch, of St. Thecla Parish in Clinton Township, said his vocation began at any early age, when his parents encouraged him to begin altar serving. 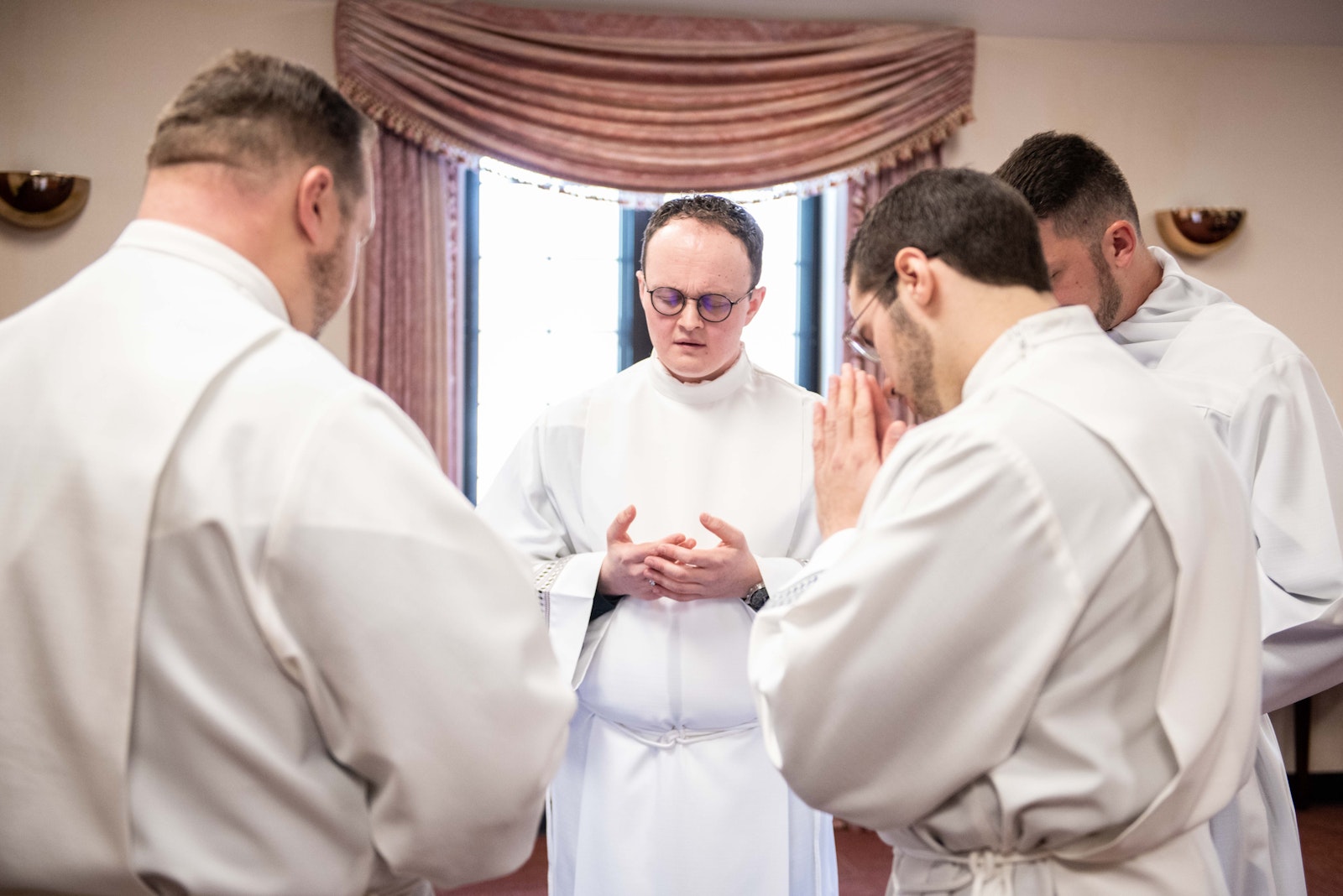 Soon-to-be Deacon Richard Dorsch Jr. prays with his classmates before the ordination Mass on April 23 at the Cathedral of the Most Blessed Sacrament. Deacon Dorsch said he came to a powerful understanding of his vocation after a chance encounter with the relative of a patient with whom he prayed when he was working in a hospital after college.

“My parents kind of forced me into altar serving at first, but I really learned to love it,” Deacon Dorsch said in a vocation testimonial posted online. “But that’s when I first really noticed what (being a) priest was really about.”

However, it wasn’t until he received a personal invitation from the associate pastor at his parish to consider a vocation to the priesthood that Deacon Dorsch began to truly consider God’s plan for his life. Still, he pushed it to the back of his mind.

After college, Deacon Dorsch was working at Royal Oak Beaumont Hospital when a patient who was about to go into surgery requested to see a priest. It was 11:30 p.m., and there wasn’t one to be found, so he prayed with the patient himself.

Two years later, Deacon Dorsch was pumping gas at a gas station, when a man approached him out of the blue.

“He said, ‘You probably don’t remember this, but a while back you helped my grandma get through surgery,’” Deacon Dorsch recalled. “He said, ‘I want to thank you, because you helped me become Catholic that following year in RCIA.’ And he brought his parents into the Church the following year.”

“I just stood there in shock,” Deacon Dorsch said. “It was at that moment at that gas station pumping gas that I realized, ‘Yeah, let’s get this application (to the seminary) on the table.’”

Deacon Schupbach also felt called from a young age to consider the priesthood after observing some “holy, energetic priests” in his life. 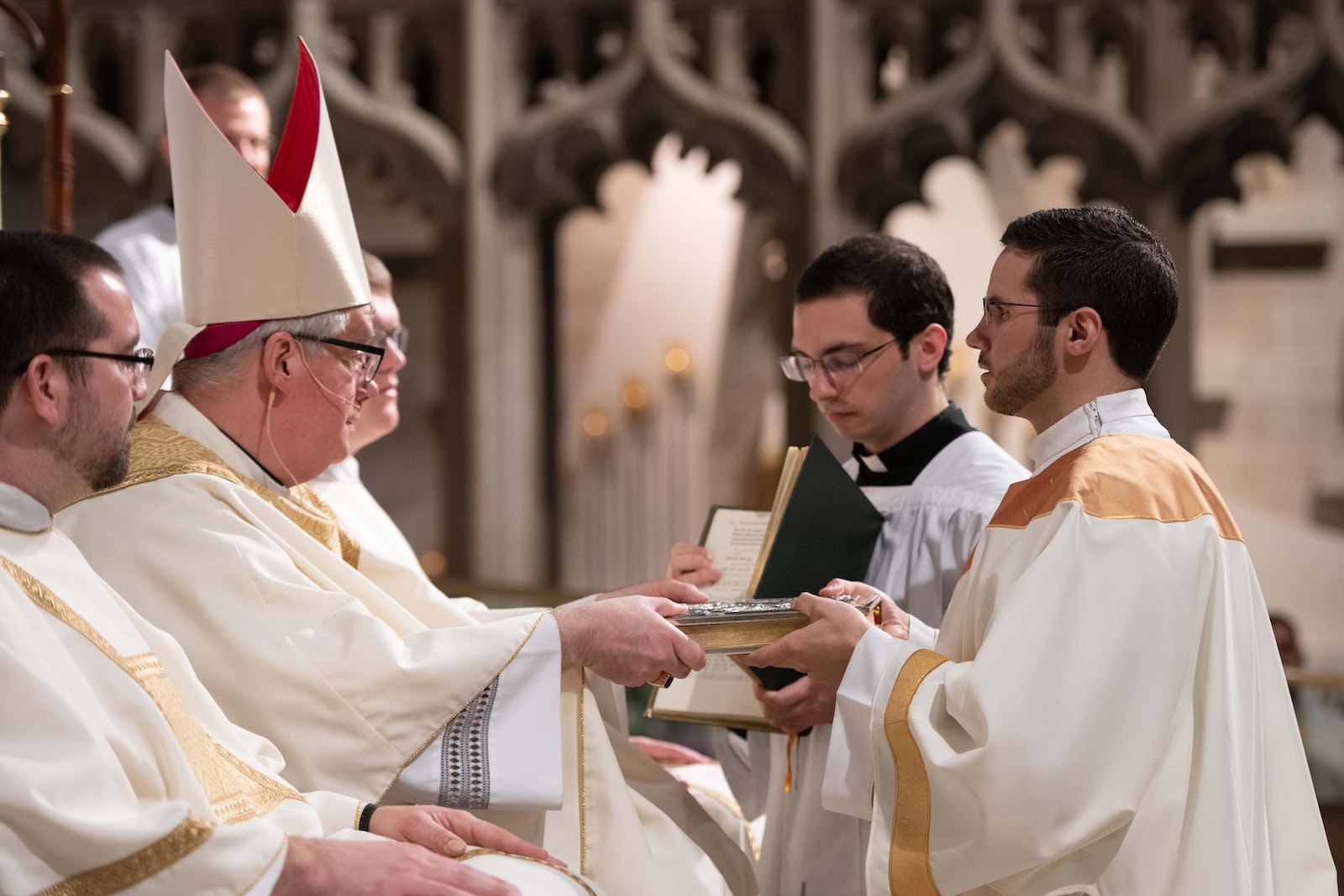 Bishop Battersby performs part of the ordination rite as Deacon Jeremy Schupbach kneels April 23 at the Cathedral of the Most Blessed Sacrament. Deacon Schupbach said his calling was strengthened through prayer and study of the Church's rich theology.

As a young man, he made efforts to deepen his prayer life as he continued to discern, but there wasn’t a moment of distinctive inspiration, he said.

“It isn’t as though there was a moment when God told me he wanted me to be a priest. It wasn’t anything like that at all,” said Deacon Schupbach, of St. Daniel Parish in Clarkston. “But I distinctively felt an invitation more than anything else. God was sort of saying, ‘If you can’t say yes now, when can you?’

“In a sort of remarkable way, it felt like the Holy Spirit gushed in, and the ‘yes’ gushed out,” Deacon Schupbach said.

Initially, his vocation felt like something he was doing “because God wanted it,” but later, Deacon Schupbach said, he began to want it for himself. In college, he continued his studies in philosophy and theology and came to fall more deeply in love with his faith.

“It was through coming to approach my faith in new ways, in deeper ways than I had before, that I really found a new passion for the Catholic faith, and I was rediscovering it,” Deacon Schupbach said. “That passion was so much that I felt like I could legitimately say I wanted to spend my life growing deeper and deeper in understanding the Catholic faith and sharing that with other people.”

Deacon Bruno Selvaraj’s vocation story began growing up in his native India. He, too, felt called to the priesthood as a young man, but his local seminary in the Diocese of Kadaba had too many applicants — a problem foreign to many U.S. seminaries. 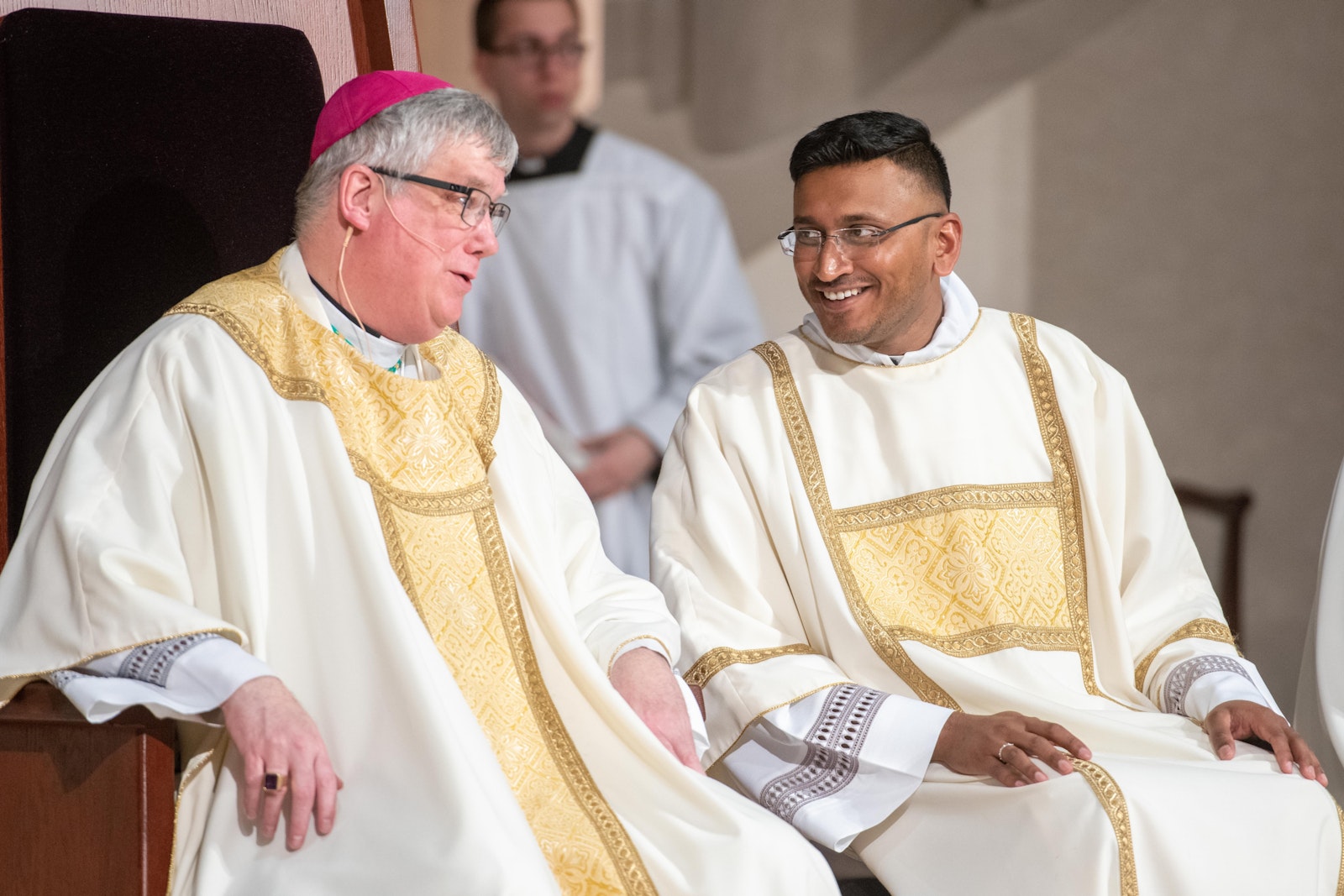 Deacon Michael Bruno Selvaraj shares a smile with Bishop Battersby during his ordination Mass. Deacon Bruno's vocation story began in his native India, where the seminary was too full to admit him as a young man. It wasn't until he moved to Michigan in 2014 that he rediscovered his calling.

Choosing instead to begin a career, Deacon Selvaraj said he pushed the thought to the back burner.

“I was blessed to have everything I could ever desire — a car, a house, a motorcycle,” Deacon Bruno said.

In the fall of 2014, Deacon Bruno decided to continue his education in the United States, arriving in Michigan to pursue a master’s degree in information technology at Lawrence Technological University in Southfield.

It was after he arrived in the Archdiocese of Detroit, with the help of a spiritual director, that the thought of priesthood began to re-emerge in Deacon Bruno’s mind.

“When I was initially thinking about priesthood, I sensed a great peace in it. I was thinking, ‘If this is something peaceful, and I’m not really anxious about it, maybe I should really consider this in my life,” said Deacon Bruno, who belongs to St. Fabian Parish in Farmington Hills.

With his degrees already in hand, Deacon Bruno said, he felt he had nothing to lose by giving seminary a try.

“I had done my master’s program and had my bachelor’s, and I thought, ‘I still have a life if it turns out this isn’t right for me.’ But I wanted to give the Lord a chance, to see what He desires.”

Deacon Smith, who grew up at St. Peter Parish in Mount Clemens, was working as a teacher at his parish school when he became involved in youth ministry. He was asked to accompany the parish’s youth group to World Youth Day in Sydney, Australia, in 2008, during which time he discovered a passion for working with young people. Deacon Andrew Smith delivers a thank-you address after his ordination to the transitional diaconate on behalf of his classmates. Deacon Smith said two visits to World Youth Day, as well as hours spent in Eucharistic adoration, confirmed his vocation.

In 2016, while working at his parish, Deacon Smith was asked to attend the Archdiocese of Detroit’s Amazing Parish Conference. At the end of one of the sessions, he decided to attend Eucharistic adoration.

“During that adoration, the thought came into my head. It was a question that kept circling, ‘Should I become a priest?’” Deacon Smith said. “I would try to change the subject, move away from it, think of anything else, and the question just kept coming back.”

After talking with his pastor and the archdiocese’s vocations director, Deacon Smith began to investigate further, eventually attending a weekend retreat at Sacred Heart Major Seminary.

“It was really confirmed for me over the summer when I went to World Youth Day again at Krakow, (Poland in 2016). It was the first time I had really seen a large number of younger priests in one place,” Deacon Smith said. “I could feel this draw to be one of them, to be part of that fraternity, that brotherhood.”

Deacon Walters began thinking about priesthood “in a real way” in seventh or eighth grade, he said.

“I kind of stuck with that thought of priesthood throughout my high school years, and it never left me,” Deacon Walters said. “When I was done with high school, I applied to Sacred Heart, and praised be Jesus Christ, they let me in.” 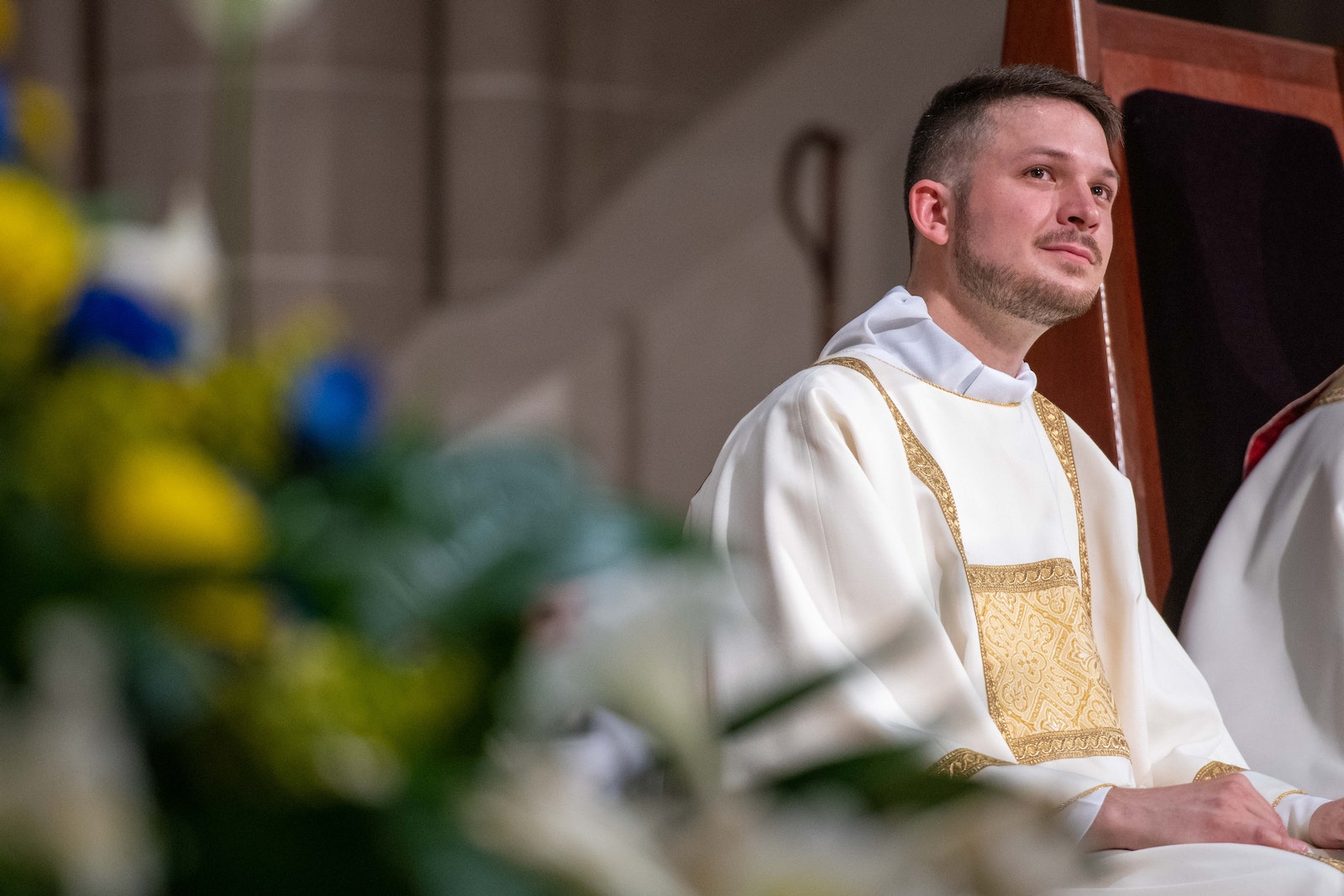 Deacon Ryan Walters, pictured during his ordination Mass, left the seminary for a few years, during which he discerned a possible vocation to marriage, but the idea of priesthood never left him, he said.

Deacon Walters, who belongs to SS. Cyril and Methodius Parish in Sterling Heights, entered the seminary at 18 years old and stayed for three years “before I felt the Lord calling me elsewhere.”

In 2014, he left the seminary thinking God might be calling him to marriage. He had a girlfriend, a full-time job and had finished college.

“I attained all that I left for, and it was good and I was happy,” Deacon Walters said, “but there was still something still missing. In a way, I knew it was priesthood, but I would just push it away.”

But the further he went, the thought wouldn’t leave. Finally, “I said, ‘Lord, give me a sign,’” Deacon Walters said. “And I actually got those signs, back to back to back.”

“What you receive here (at the seminary) is priceless,” Deacon Walters said. “The values, the formation and friendships you make, it’s something you’ll take with you the rest of your life. … You have to discern with an open mind and heart, and I’ve taken that to heart. It’s really about keeping your eyes fixed on Jesus at all times. It’s all about Jesus, and our lives should revolve around him.”

Watch a livestream of the ordination Mass of transitional deacons April 23 on the Archdiocese of Detroit's YouTube channel.