For archdiocese’s victim assistance coordinator, helping survivors is a ministry of compassion 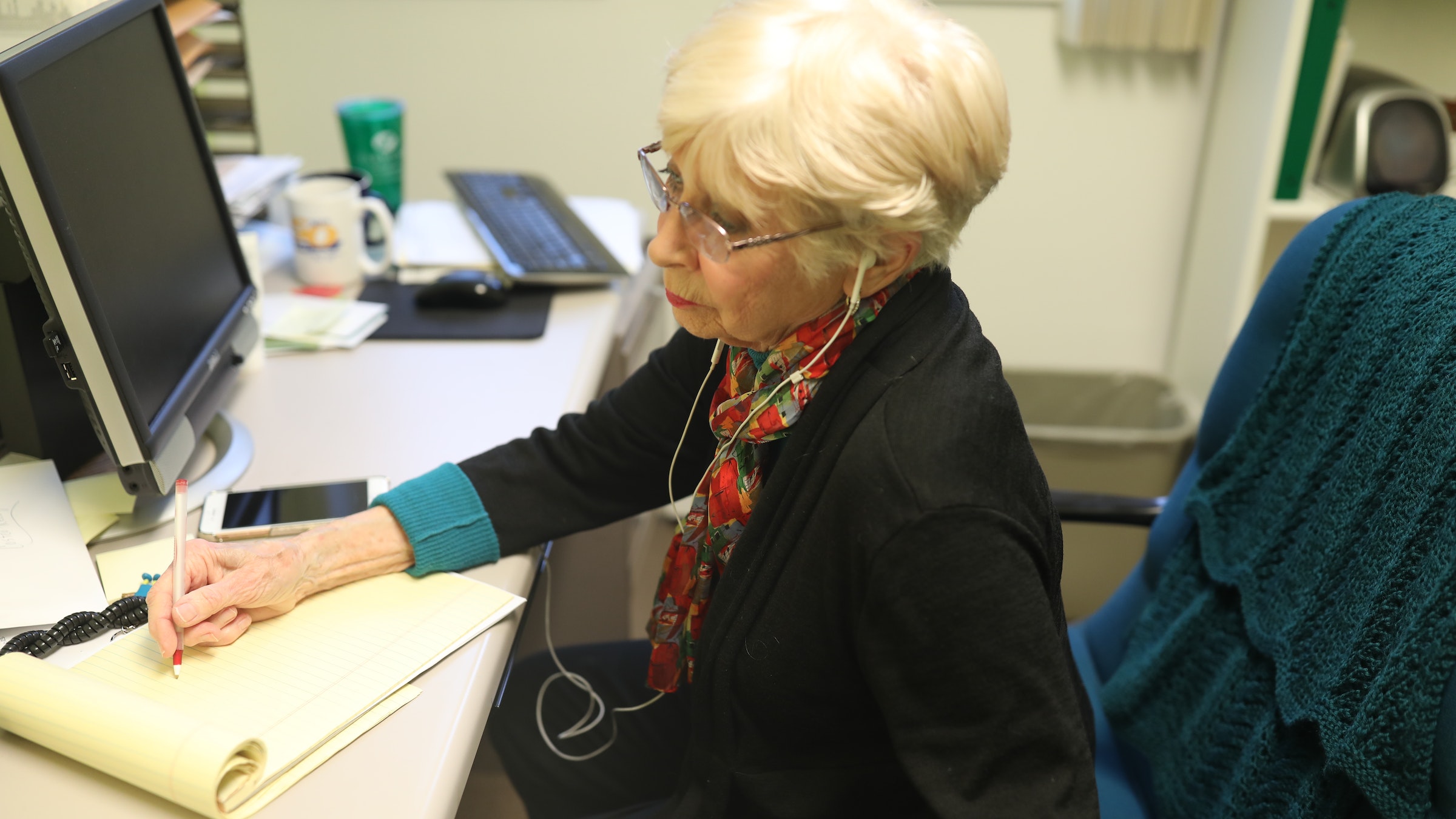 Marge Huggard, victim assistance coordinator for the Archdiocese of Detroit, strives to be a voice of empathy and walk with survivors in any way they need it. “It’s the hardest call that someone is going to make,” said Huggard, a licensed clinical social worker. “I want them to feel safe. I want them to know that I believe them.” (Naomi Vrazo | Detroit Catholic)

This article is the third in a three-part series about how the Archdiocese of Detroit responds to, works to prevent and seeks to help victims of sexual abuse.

DETROIT — Seven days a week, 365 days a year, Marge Huggard is on the job.

She never knows when a call might come in from someone who has been hurt, affected or angered by the sexual abuse crisis in the Church, whether by a member of the clergy or a church worker. But when a call does come in, she is ready to listen.

“When they call in to the 866 number [for the Archdiocese of Detroit’s hotline for reporting sexual abuse], the number is funneled directly to my cellphone, so they’re not leaving a message if I can answer it,” Huggard said. “Sometimes that will surprise them or take them aback.”

As the victim assistance coordinator for the Archdiocese of Detroit, it is Huggard’s job to be a compassionate ear, a proactive advocate and a partner for survivors of abuse and their families. This job puts her on the front lines of archdiocese’s commitment to caring for those who’ve suffered grave indignities at the hands of church representatives, and walking with people on their road to recovery and healing.

Huggard always strives to be a voice of empathy, whether she’s speaking to someone about a priest who abused them long ago, a concerned parishioner worried about the inappropriate conduct of a staff member, or even just someone who wants to vent.

“It’s the hardest call that someone is going to make,” said Huggard, a licensed clinical social worker. “I want them to feel safe. I want them to know that I believe them. I want them to let me work with them as far as they are willing.”

“It’s the hardest call that someone is going to make,” said Huggard, a licensed clinical social worker. “I want them to feel safe. I want them to know that I believe them. I want them to let me work with them as far as they are willing.”

Huggard isn’t an employee of the Archdiocese of Detroit, but is independently contracted by the archdiocese to carry out her work. All 197 dioceses and eparchies in the United States have a victim assistance coordinator, a position that was established in 2002 as part of the Charter for the Protection of Children and Young People, adopted by the U.S. bishops as a response to the national sexual abuse crisis.

Huggard doesn’t set expectations for the calls she receives, but lets the caller steer the conversation.

“My goals are their goals,” Huggard said. “I go out of my way to try to make sure that they are comfortable talking to me, that if they need to slow down or stop, if they want to take a break, I can provide a safe environment to talk.”

If the person wishes to report abuse, Huggard takes the person’s information and reports it to the archdiocese’s abuse response team, including the Archdiocesan Review Board, which then forwards the claim to the proper civil authorities before beginning its own investigation.

Sometimes, a report isn’t made over a single phone call. When a person decides to call, it can take time for them to feel comfortable fully sharing the details of such a painful circumstance, Huggard said.

“They can take it in steps or stages. I don’t have to have everything all at one time. If it’s too difficult, we can agree to make a phone call or conversation on another day,” Huggard said. “Depending on the needs, it can be done immediately or over a period of months. Sometimes people have things going on in their life, and they’re content just having made the report, and they’ll want to pick it up again later. Other times, it’s immediate that we have to get involved, and we do.”

Though the vast majority of complaints involve abuse that was committed decades ago, Huggard said it’s important for victims to know that the Archdiocese of Detroit stands with them and wants to help.

“Most of the calls I’m getting are [about allegations] from 40 and 50, 60 years ago. Once in a while I’ll get a call from maybe 1980,” Huggard said. “Every time there’s a news article or something comes out in the press about a priest, it resurfaces lots of emotions for people. So I can be pretty sure that the phone is going to ring, because people have had that experience come up again, even if they’ve not thought about it for a long time.”

For those open to counseling, Huggard can arrange for a licensed therapist — paid for by the archdiocese — to walk with them through their emotions and experiences. While Huggard does not herself provide therapy, the counselors she recommends are master’s level social workers or psychologists trained to work with survivors of physical, sexual or emotional abuse, including those who experience post-traumatic stress.

“If the person who’s calling me tells me that they’ve never sought counseling, but it’s been bothering them all their life, and they want to have therapy, I can go about the process of getting them set up for therapy,” Huggard said. “We want to help so that they can have better relationships, and make peace with what’s happened to them.”

“If the person who’s calling me tells me that they’ve never sought counseling, but it’s been bothering them all their life, and they want to have therapy, I can go about the process of getting them set up for therapy,” Huggard said. “We want to help so that they can have better relationships, and make peace with what’s happened to them.”

One of the hardest parts of making a report of sexual abuse can be its effect on family dynamics when a secret kept for decades — even from a person’s spouse or children — is revealed.

“Husbands or wives have spouses who are dedicated to them, and here’s something they didn’t know about many, many years later,” Huggard said. “So it’s a very important time for everyone. Do they cry? Sometimes. Do they get angry? Often. I understand that this brings about a whole range of emotions for people who have not talked about this, and not gotten help for this.”

It’s not uncommon for people to spend years coming to terms with what happened, Huggard said, especially if the person grew up in an environment where a priest’s word might be taken over a child’s.

“I think many people tried to sweep it under the carpet, tried to pretend that they were fine, that they could move on with their life — that it didn’t affect them,” Huggard said. “Or it affected them, but that was then, and this is now. At the time that this was happening, a lot of children believed that their parents wouldn’t believe them. And that is what I have heard over and over: ‘I did tell my mom, but she didn’t believe me. My mom was a very devout Catholic. She couldn’t imagine such a thing could be done.’ Or, ‘I couldn’t tell my dad. We were having a rough spot in our family.’ Maybe their dad wasn’t someone they could talk to.”

Huggard credits the #metoo movement, as well as media reports about the crisis, with helping victims find the strength to tell their stories, which ultimately leads to healing and allows the Church to confront such sins.

“It takes a lot of courage to make that phone call. I know that, and I applaud them for doing that. And I think they know that I do,” Huggard said.

Meeting with the archbishop

If a survivor or their family wishes to meet with Archbishop Allen H. Vigneron, Huggard arranges for that to happen. Usually, the family will meet first with Msgr. G. Michael Bugarin, the archbishop’s delegate for matters of clergy and church personnel misconduct, who will speak with the family and coordinate the meeting.

“We always give victims the opportunity to meet with the archbishop, and they regularly do,” Msgr. Bugarin said. “Normally that takes place in my presence, and they’re really powerful meetings.”

It’s always a difficult conversation for both parties, he said, but victims typically appreciate the chance to be heard by the archbishop, who conducts such meetings with a deep spirit of humility, Msgr. Bugarin said.

“We always give victims the opportunity to meet with the archbishop, and they regularly do,” Msgr. Bugarin said. “He expresses a deep sorrow for what has happened. ... To hear what some of the clergy have done to some of the faithful, it’s just appalling. He’s very pastoral at those meetings, and many victims appreciate the opportunity of hearing directly from the archbishop.”

“Those meetings with the victims, in my experience, are very healing,” Msgr. Bugarin added. “The archbishop is so pastoral, he’s so kind. He’s very pastoral at those meetings, and many victims appreciate the opportunity of hearing directly from the archbishop.”

For Huggard, helping victims cope with traumatic experiences amounts to a form of ministry, even if she doesn’t directly inject religion or faith into the conversation.

If there’s one thing she wants survivors, concerned Catholics and others to know, it’s that the Church in Detroit truly cares about helping victims find the healing, justice and reconciliation they deserve.

“I think that our team is very supportive and empathetic to each other and to the survivors, and they work on behalf of the victim,” Huggard said. “I think it’s an honor to work with this team, and to know that we have good people who don’t have any other agenda than concern for the victim.”