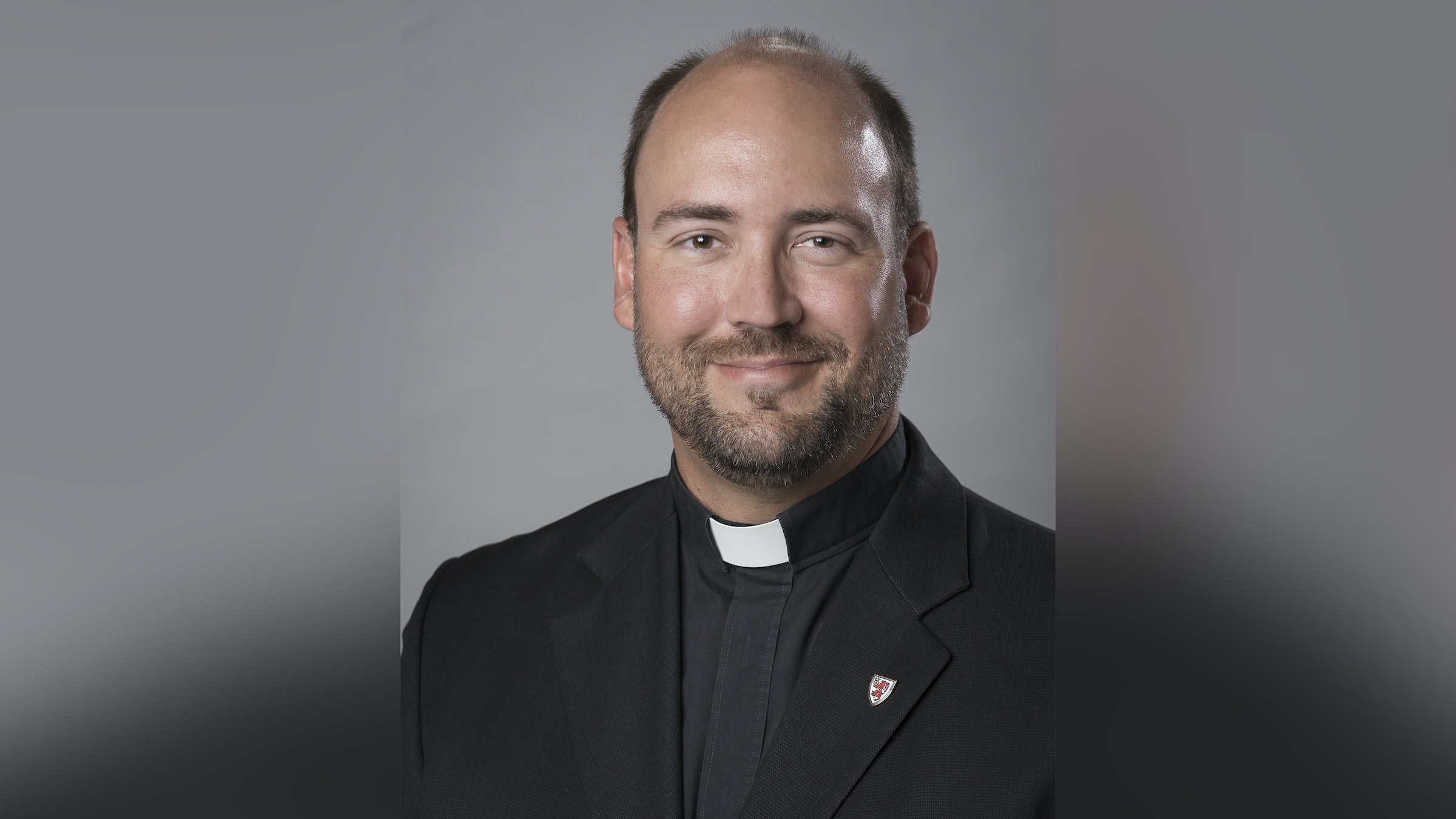 Fr. Stephen Burr, current vice rector and dean of seminarian formation for Sacred Heart Major Seminary, has been named the seminary’s 14th rector and president, succeeding current rector Msgr. Todd Lajiness, who has served in that role since 2012. Fr. Burr will become the new rector on July 1, 2021. (Archdiocese of Detroit photo)

Msgr. Lajiness, who has led Sacred Heart since 2012, will accept a new role leading one of the Archdiocese of Detroit’s newly created “families of parishes,” Archbishop Allen H. Vigneron announced Nov. 24.

Succeeding Fr. Burr as vice rector and dean of seminarian formation will be Fr. Charles Fox, the seminary’s current director of graduate seminarians and director of liturgy, the archbishop also announced.

Archbishop Vigneron and Msgr. Lajiness announced the news Tuesday morning in letters to the Archdiocese of Detroit and Sacred Heart communities.

“I join the entire Archdiocese in expressing my deep gratitude for the dedicated service of Msgr. Lajiness, Fr. Burr, and Fr. Fox, and for their docility to the Holy Spirit’s call for these next steps in ministry,” Archbishop Vigneron said. “In God’s providence, we find in Msgr. Lajiness an experienced leader eager to bring to fruition our vision for thriving Families of Parishes, and in Fr. Burr and Fr. Fox we find disciples committed to continuing the great mission of Sacred Heart.”

“I am grateful for these talented disciples for embracing their next roles advancing the mission of the Archdiocese of Detroit,” the archbishop added. “In the words of Blessed Solanus Casey, let us thank God ahead of time for the many fruits that will flow from these appointments.”

Fr. Burr, 44, will be Sacred Heart’s 14th rector, and will lead an institution that has established itself as one of the United States’ premier formation centers for clergy and laity alike. Sacred Heart celebrated its centennial celebration in 2019, and is well-regarded nationwide for its world-renown faculty and formation programs, including its groundbreaking Licentiate in Sacred Theology in the New Evangelization. Though based in Detroit, Sacred Heart educates and forms seminarians for 16 dioceses and religious orders, with 114 seminarians enrolled this fall.

“It has been a great privilege to serve at Sacred Heart Major Seminary for 12 years, and I am honored to embrace my new responsibilities as rector and president, so that I can continue helping to advance our mission of forming hearts and minds to proclaim Jesus Christ,” Fr. Burr said. “I thank Archbishop Vigneron for his confidence in me, and I thank Msgr. Lajiness for his leadership and friendship in ministry.”

Before his tenure at Sacred Heart, Fr. Burr served in parish assignments at St. Andrew in Rochester (2002-05), Divine Child in Dearborn (2005-07) and Our Lady of Good Counsel in Plymouth (2007-08). He also served as chaplain to Brother Rice and Marian high schools in Bloomfield Hills.

Concurrent with his seminary assignments, Fr. Burr also served as a weekend associate at St. Mary Parish in Wayne (2008-11) and St. John Vianney in Shelby Township (2012-17), and currently as pastor of Presentation/Our Lady of Victory Parish in Detroit. He also has served on the archdiocesan assignment board and Presbyteral Council.

Fr. Burr returns to lead the institution where he received his own seminary formation and education, having earned a bachelor’s in philosophy in 1998 and master of divinity in 2002 from Sacred Heart. In 2019, he also earned his doctorate in ministry from The Catholic University of America in Washington, D.C.

Fr. Burr will assume the seminary’s leadership on July 1, 2021, when Msgr. Lajiness concludes one of the longest tenures as rector of Detroit’s seminary since the 1950s. His nine years will be longer than any other rector since Msgr. Albert Matyn served in that role from 1952-64. Now-Archbishop Vigneron also served nine years as Sacred Heart’s rector from 1994-2003.

“I have been deeply blessed by the many years of ministry at the seminary, and have been humbled and moved by the devotion and earnestness of our faculty, staff, and students,” Msgr. Lajiness, 52, said. “Since ordination I have always had a desire for parish ministry and in the midst of such a significant initiative as Families of Parishes, I am happy to serve in any way the Archdiocese needs.

“Having worked closely with Fr. Burr, I’m delighted he will be the new rector and president and am completely confident that he will be an exceptional leader who will serve the seminary well.”

Msgr. Lajiness’ new parish assignment will be announced at a later date.

Prior to serving as Sacred Heart’s rector, Msgr. Lajiness served as the seminary’s dean of studies, director of undergraduate formation, and as a professor of theology.

Ordained in 1995, he was associate pastor of Our Lady of Victory in Northville (1995-97) and served as the late Cardinal Edmund C. Szoka’s personal secretary while the cardinal was president of the Pontifical Commission of Vatican City State (1997-2002). He’s also served as chaplain to the state Knights of Columbus, Knights of the Holy Sepulchre and in advisory roles for the Catholic Youth Organization, Madonna University and the Association of Theological Schools.

Under Msgr. Lajiness’ leadership, the seminary emphasized its role in forming shepherds after the heart of Jesus Christ, particularly through its priestly and diaconate formation programs. Through enriching internship opportunities, first Friday prayer services and a recommitment to neighborhood service, Msgr. Lajiness helped seminarians engage in numerous ministry opportunities as they prepared for ordination.

He oversaw record numbers of graduates in 2018 and 2019, which included a significant number of lay commuter students, and helped launch the seminary’s heralded “MOOC” programs (massive open online courses), which attracted students from around the world to participate in free, online lecture programs taught by Sacred Heart’s professors.

In 2016, the seminary expanded its physical footprint with the purchase of six new plots of land to the campus’ west, which will be used for future developments, and the installation of an athletic track for seminarians’ and faculty members’ use.

After the release of Unleash the Gospel in 2017, Msgr. Lajiness oversaw initial efforts to launch a new Institute for Lay Witness in the World at Sacred Heart, which will emphasize the role of the laity in evangelization.

He began teaching on the seminary’s faculty in 2013, and transitioned to full-time ministry there in 2015, serving as director of graduate seminarians, director of liturgy and assistant professor of theology.

Fr. Fox currently writes a regular column for Detroit Catholic, and is a frequent contributor to national publications including Catholic World Report. He’s also served as a weekend associate at St. Aidan in Livonia and St. Therese of Lisieux in Shelby Township, and is chaplain of St. Paul Street Evangelization.