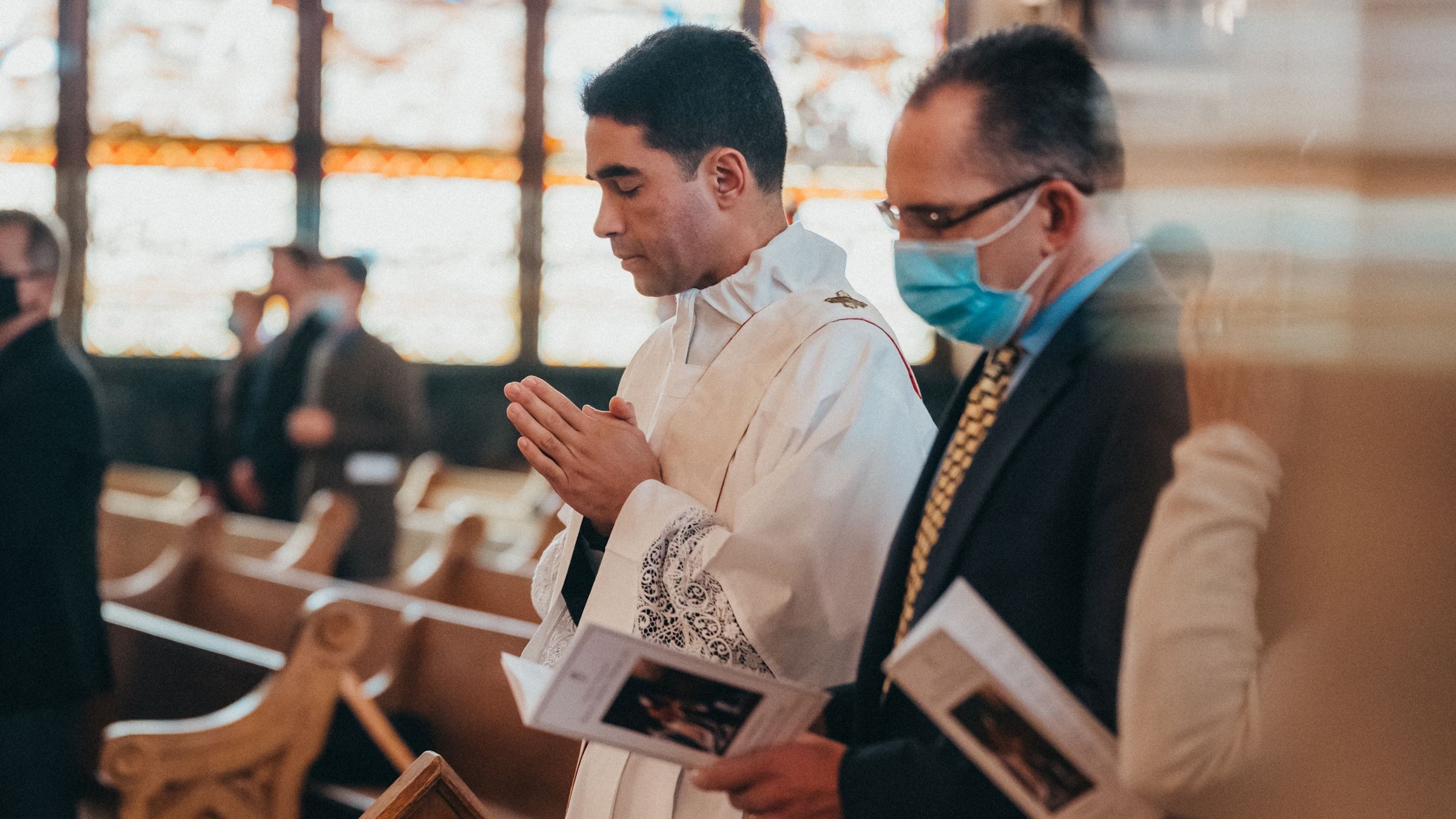 Fr. Matthew Maxwell, MC, prays during his ordination Mass on Nov. 21 at Sweetest Heart of Mary Church in Detroit, where he became the first U.S.-born man to be ordained for the Miles Christi religious order. The order, founded in Argentina in 1994, has had a presence in the Archdiocese of Detroit since 2000. (Photos by Valaurian Waller | Detroit Catholic)

DETROIT — Fr. Matthew Maxwell, MC, made history Nov. 21 when he knelt before Archbishop Allen H. Vigneron at Sweetest Heart of Mary Church in Detroit and was ordained a priest for the Miles Christi religious order.

Miles Christi — Latin for “soldier of Christ” — was founded in Argentina in December 1994, and arrived in the United States in 2000, invited by Cardinal Adam J. Maida to set up a religious house in South Lyon. The relatively young community specializes in spiritual direction and retreats and is dedicated to the sanctification of the laity, particularly young men and women.

Despite 20 years in the United States, the religious community had never before ordained an American — until Fr. Maxwell.

The 34-year-old California native became the first U.S.-born man to be ordained for Miles Christi — a particular honor for the Archdiocese of Detroit, Archbishop Vigneron said.

“We are here with a conviction that God is about to do something great,” Archbishop Vigneron said during the homily at Fr. Maxwell’s ordination Mass. “He is about to do the great work of grace because it is Christ who makes Bro. Matthew a priest. It is Christ who acts, who consecrates you. Because who else could do such a great thing as to make a man a sacrament, configuring him to himself? Making him an image, a sign of Jesus, head shepherd and bridegroom of his Church?”

Most of Miles Christi’s priests are in Argentina, but the order also has a presence in Michigan, California, Rome and Mexico. While the order is still relatively small and young — Miles Christi has a little more than 50 members worldwide, including priests, brothers, novices and postulants — Fr. Maxwell’s ordination after nearly 10 years of priestly formation marks a huge milestone.

“He is the first priest recruit of our work in the States,” Fr. John Ezratty, MC, superior of the Michigan chapter of Miles Christi, told Detroit Catholic. “It is kind of the beginning of a long history. Up until now, we have been working with a lot of men, but the fact that a person born in the States is now becoming a priest is a big milestone, and we hope and pray he will be the first of many to come.”

Fr. Maxwell grew up in San Diego, one of seven children. When he was 10 years old, his family began to practice their Catholic faith more seriously.

“We started going to Mass every day, and that contact with seeing priests, with daily Mass, really started moving me to spend lots of time in prayer,” Fr. Maxwell said. “I was able to read the lives of the saints, which was a huge inspiration. That is where the idea (to become a priest) started getting planted.”

Fr. Maxwell continued to discern, even making a trip to see the Miles Christi house in Michigan, but by the time he graduated high school, he wasn’t ready to take the next step. He went to Thomas Aquinas College in southern California to study computer programming, graduating in 2008.

It was during this time when Fr. Maxwell’s parents invited him to a welcome party for some new priests in the San Diego area, including a few Miles Christi priests whom he had met years earlier.

In 2011, Fr. Maxwell officially decided to enter the order, feeling drawn to the Miles Christi charisms and by the fact that its members seemed like normal, holy men, filled with joy no matter what they were doing.

“It seemed wholesome and holy in a normal way,” Fr. Maxwell said.

One particular charism of the Miles Christi order is its ministry to young adults, Fr. Ezratty said. The goal is to help people, particularly young men, grow in their faith and grow in their relationship with Christ.

“We focus on young adults because we know that they are the future of our society, country and our Church,” Fr. Ezratty said.

In order to foster that holiness, Miles Christi focuses on three main areas of apostolate: spiritual direction, Ignatian spirituality and Catholic doctrinal formation. It offers many of these things at the Miles Christi Family Center in South Lyon, which also offers daily Mass, regular confession opportunities and formation groups for men, women and teenagers.

“All of our priests are trained in spiritual direction,” Fr. Ezratty said. “These are consistent, one-on-one meetings with people to help them grow in the life of prayer, grow in their relationship with Christ and grow in their virtue, so that little by little, they can be more Christlike.”

The order offers regular weekend retreats and formation groups across the country in which they preach the spiritual exercises of St. Ignatius of Loyola, in which Miles Christi priests are specially trained.

“We want to give people the opportunity to be formed in the Catholic faith,” Fr. Ezratty said. “We know that nobody loves what they don’t know. So if you want to love your faith and love the Church, you need to know the Church first.”

Following his ordination, Fr. Maxwell will remain in the Detroit area to carry out his new ministry, offering spiritual direction, organizing formation groups and playing a “small role” in the formation of first-year seminarians at the Miles Christi house in South Lyon.

Fr. Maxwell said he is excited by the potential that his ordination might open the door to more Miles Christi vocations in the United States.

He might be the first, but he is not planning to be the last, he said.

“We have 10 years of formation, so from day one we have been preparing ourselves for this,” Fr. Maxwell said. “You enter thinking that (the priesthood) is your goal, and obviously you discern the whole time to see where God is leading you, but you are really preparing from day one. In everything — whether it be community life, in sports, in your philosophical and intellectual formation — everything is aimed toward entering the priesthood. You can’t beat that formation; over time, it allows you to take it all in.”

To learn more about the Miles Christi religious order, including pilgrimage and formation opportunities in Metro Detroit, visit mileschristi.org.