Fr. Richard Elmer, an institution at Catholic Central, was a 'simply remarkable' priest 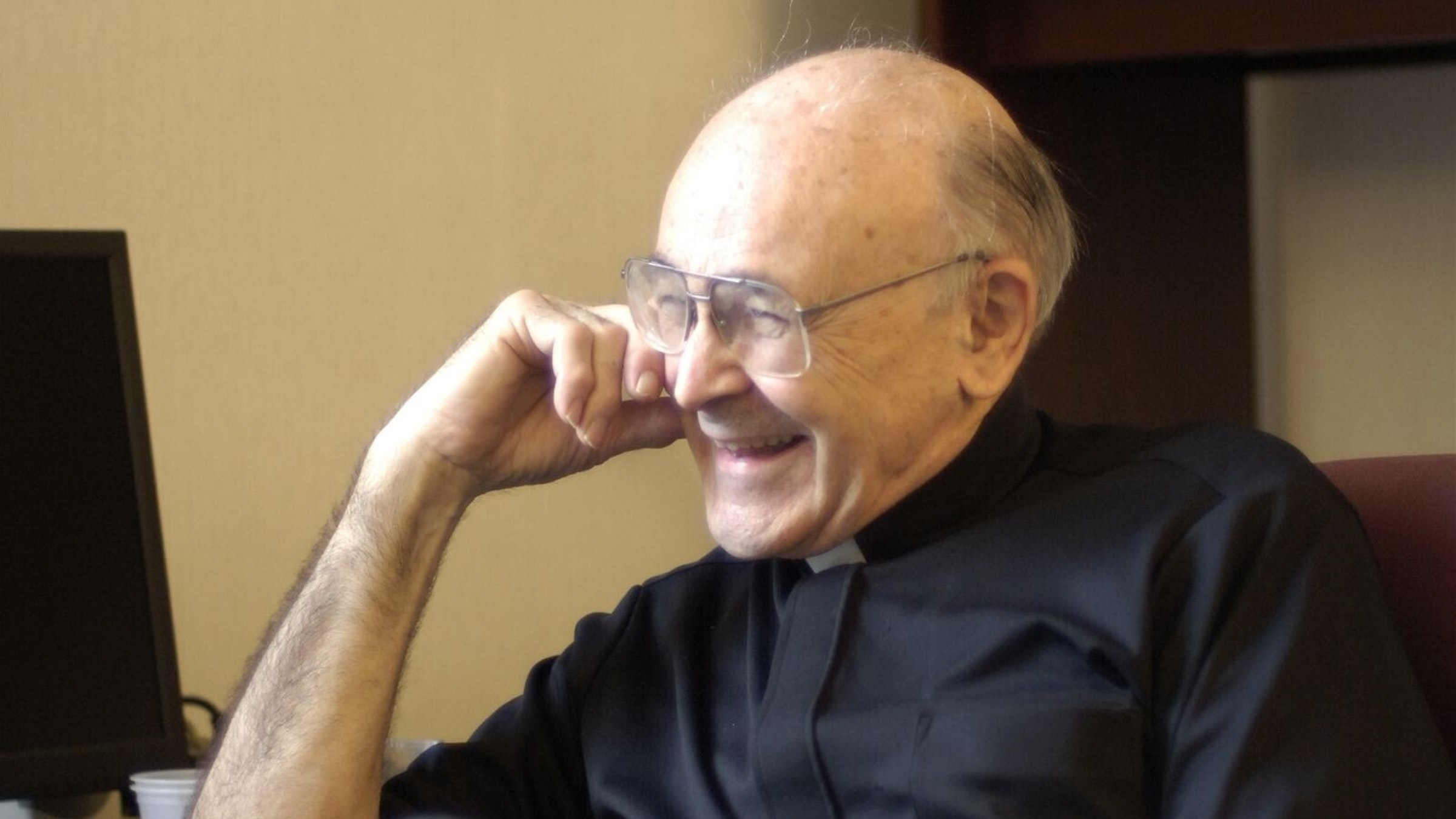 NOVI — A proud Shamrock, a humble priest, a dedicated educator and a loyal friend, Fr. Richard Elmer, CSB, was a lion for Catholic education in the Archdiocese of Detroit for more than six decades.

A student, principal and president of Detroit Catholic Central High School, Fr. Elmer graced the lives of many students, faculty and staff who walked the calls of Catholic Central, be it the Outer Drive campus in Detroit or its current location on Wixom Road in Novi.

In his time of service at the all-boys Detroit Catholic Central and later the all-girls St. Catherine of Siena Academy in Wixom, Fr. Elmer left an indelible mark on the institutions he’s served. Most notably with his name gracing Detroit Catholic’s Fr. Richard Elmer Stadium, affectionately known as “The Elm.”

“Fr. Elmer was passionate about Catholic Central and his ministry as a priest,” said Fr. Patrick Fulton, CSB, current principal of the Basilian-run Catholic Central. “His sense of humor and unwavering faith will be missed.”

Richard Elmer was born in Detroit on May 3, 1928, to Frank and Loyola Elmer.

After attending Epiphany Grade School, Elmer began his affiliation with the Shamrocks, graduating from Catholic Central in 1946.

He professed vows in the Toronto-based Congregation of St. Basil on Aug. 15, 1948, graduating from the University of Toronto in 1952. He was ordained a Basilian priest on June 29, 1957, beginning his priestly ministry as a teacher, guidance counselor – obtaining a Master’s in guidance and counseling from the University of Detroit in 1963 -- athletic director, and principal of Catholic Central.

Fr. Elmer left Catholic Central in 1978 to head to Washington, D.C., to work for the National Catholic Education Association, serving in a senior administrative role. He was later appointed Dean of Men at the University of St. Thomas in Houston.

Fr. Elmer returned to Catholic Central in 1990 to serve a Director of Development and Alumni Relations, and in 2000, he became the first president of Catholic Central, securing the land and donations the school would need for its fifth and current location on Wixom Road in Novi.

“I was blessed to have both a professional and personal relationship with Fr. Elmer,” said Ed Turek, current president of Catholic Central and a 1985 alum. “As a priest, and a person, he was simply remarkable. Catholic Central would not be what it is today without his passion for his school, his relationships, and his faith.”

Fr. Elmer served as president of Catholic Central for eight years, when in 2008, serving as now president emeritus, he led a collaboration between Catholic Central alumni and supporters to open St. Catherine of Siena Academy in Wixom, and all-girls Catholic School, which opened its doors for the 2010-11 academic year.

“Fr. Elmer wanted us to become a very faithful, Catholic, all-girls school in the Archdiocese of Detroit,” said Lia Johnston, president of St. Catherine of Siena Academy. “He wanted us to be authentic in our faith. He always talked about how the Eucharist is so important in what we do. He was one of the people who made daily Mass for us in the middle of day happen.”

Johnston said Fr. Elmer carried the devotion he had for Catholic education from the all-boys Catholic Central to the all-girls St. Catherine of Siena, saying he didn’t want an opportunity that was available to young men in the area not to be afforded to young women.

The girls at St. Catherine of Siena loved their principal and then-chaplain, often donning crocs — Fr. Elmer’s favorite choice of footwear — for his birthday and bringing chocolate chip cookies to school, another Fr. Elmer favorite.

“He always wanted us to be really true to our faith,” Johnston said. “That is what we try to emulate here. We try to stay true to our Catholic teachings.

“Sometimes, he’d give homilies at school Masses with the young ladies asking, ‘Do you really want to miss Mass and study another half-hour for your test, or do you want to come ask Jesus to guide you in that journey?’" Johnston recalled. “He was a very devout man, who had a great relationship with Mary; I assume he prayed to Mary to intercede for these young ladies all the time.”

Fr. Elmer was president of St. Catherine for its first year and stayed on as chaplain of the school in addition to his roles as president emeritus at Catholic Central.

“Everyone who has been blessed to spend time with Fr. Elmer knows it is impossible to fully encapsulate his unfaltering spirituality, endearing character and infectious smile in just a few words on paper,” Catholic Central said in a statement. “He was well-known for his warm, personable attitude, and his ability to make you feel as if you were the only person in the room.

"The number of lives he positively impacted cannot be measured," the statement continued. "His passion for Catholic education and his goal to assist as many souls to Heaven as possible in one lifetime will continue to inspire countless. His life serves as testament to the myriad of ways one human being can be of service to others, and his life’s story will continue to serve as a beacon of faith, hope and love for many generations still to come.”

Fr. Elmer is preceded in death by his father, Frank, and his mother, Loyola. He is survived by his brother, Lawrence; sister-in-law, Francesca; niece, Nikki Woodward and her husband Ryan; grand-niece, Maxine; his nephew, Marc, and his wife Amanda and their two children.

Catholic Central’s website leaves visitors with this lasting message from Fr. Elmer, “The primary purpose of our existence is to get to Heaven. The richest nourishment for our journey is the Holy Eucharist. Our special spokesperson is Our Blessed Mother. Jesus and Mary please be with us now and at the hour of our death. Amen.”