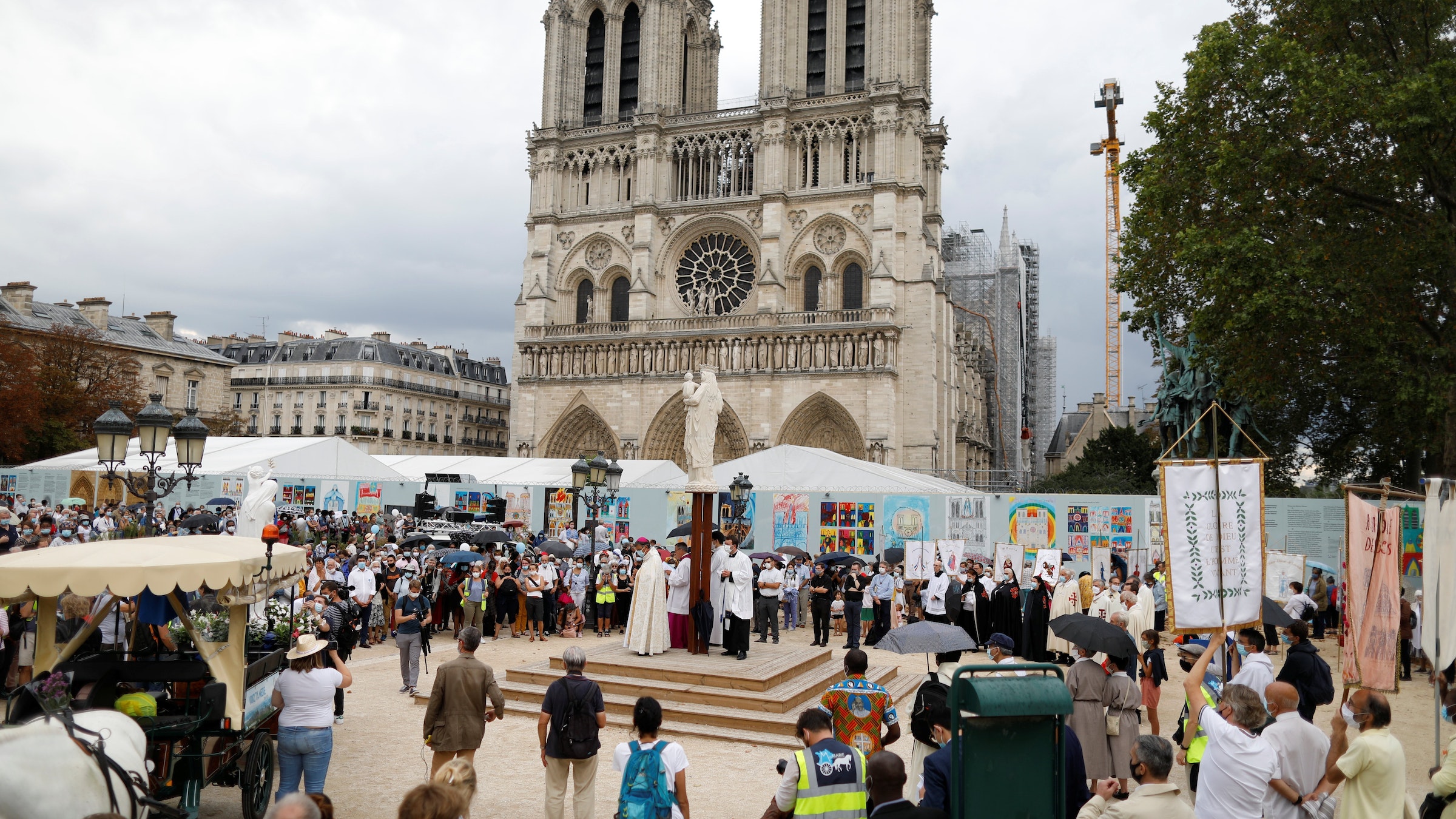 Catholics attend a solemn procession at Notre Dame Cathedral in Paris in this Aug. 14, 2020, file photo. France's Catholic bishops have set up the world's first major national church court, replacing a previous network of tribunals, although sexual abuse cases will still be referred to the Vatican. (CNS photo/Charles Platiau, Reuters)

PARIS (CNS) – France's Catholic bishops have set up what they believe to be the world's first major national church court, replacing a previous network of local tribunals, although sexual abuse cases involving children will still be referred to the Vatican.

"As a community of believers, the church has developed a comprehensive legal system, which includes the right to sanction behavior by members" who undermine "the church's spiritual and human values," the bishops' conference said in a statement.

"These ecclesial procedures do not conflict with French law. ... Like all religions, the Catholic Church is free in its internal organization, and all Catholics, as French citizens, also remain subject to the state law."

The statement explained the role of the National Canonical Penal Court, set up in Paris Dec. 5.

It said the 20-member court, approved by the Vatican in September, would be tasked with judging "canonical offenses committed by clergy and laity" nationwide, such as acts of sacrilege, apostasy, schism, misuse of sacraments and teachings against the church's magisterium. The court aimed to "strengthen and harmonize" procedures formerly followed by diocesan and archdiocesan tribunals.

"This is an unprecedented court, which does not exist, with such form and competence, under any other bishops' conference," the statement added.

"Any Catholic or person who feels aggrieved by the criminal behavior of a Catholic within ecclesial activities can now address the promoter of justice."

Establishment of the court, partly staffed by lay experts, was one of 45 recommendations by an Independent Commission on Sexual Abuse in the Church in its 2,500-page report released in October 2021. The report also proposed an external audit for victim support units and selling diocesan assets to finance compensation to those who were abused.

Preparations were stepped up after the French bishops' conference president, Archbishop Eric de Moulins-Beaufort of Reims, confirmed Nov. 7 that 11 bishops and former bishops had been investigated for abuse.

However, while the new court would hear accusations involving adults, claims of sexual offenses by clergy against minors and canonical complaints against bishops would continue to be referred to the Vatican, the statement said.

The bishops' statement said church courts were "specific to the church's religious purposes" and complied with the country's 1905 church-state separation law.

It added that bishops from France's 110 dioceses would refer cases to the new court and ensure its judgments were followed through, but would still handle matrimonial issues and "disputes related to religious affiliation."