'He is there:' St. Joseph clergy comfort Oxford students, community after tragic shooting 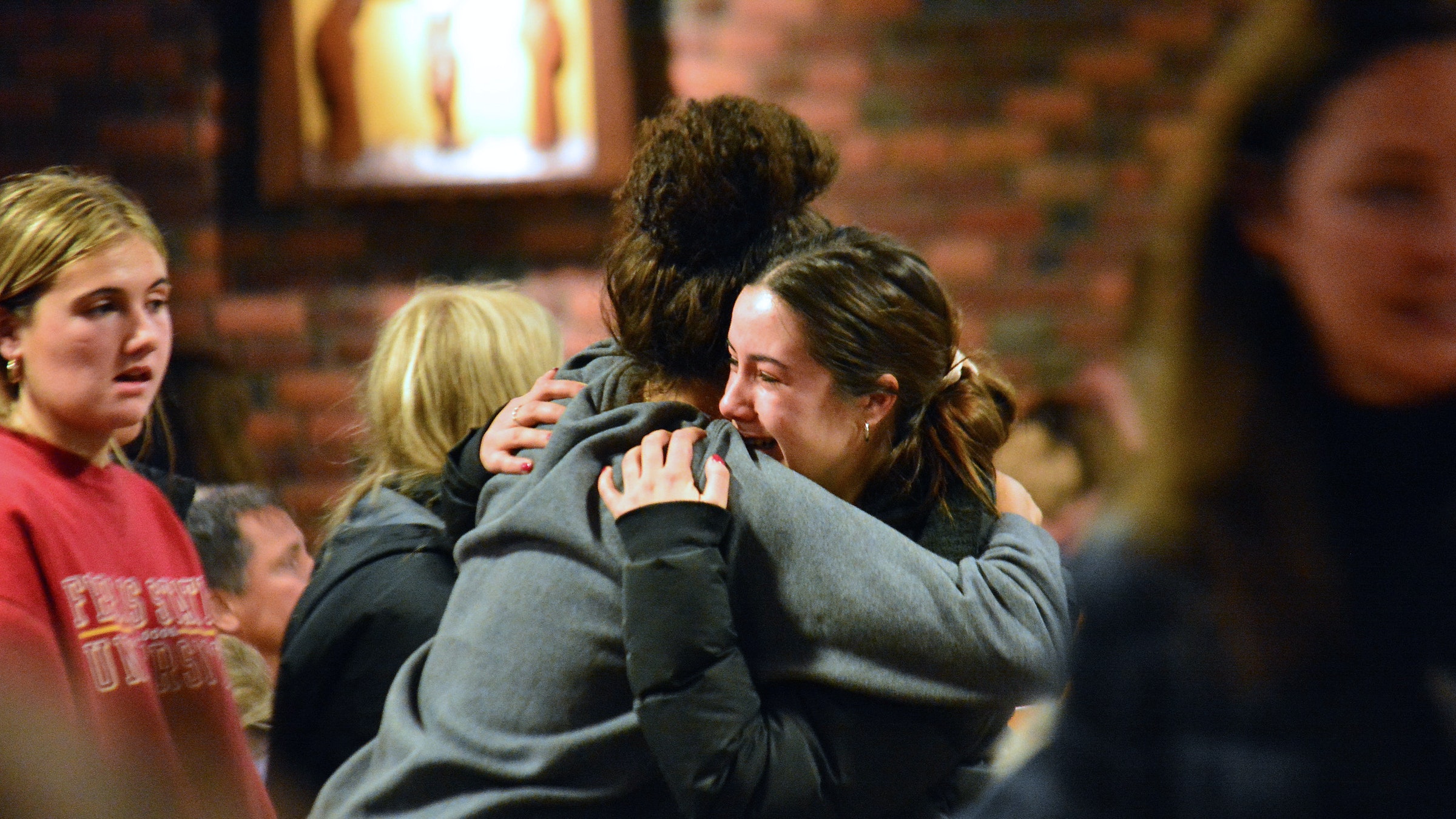 Oxford High School students comfort one another at St. Joseph Parish in Lake Orion hours after a mass shooting at the school left four students dead and seven other people wounded Nov. 30. Authorities say a 15-year-old Oxford sophomore is in custody after the shooting. (Photos by Michael Stechschulte | Detroit Catholic)

Community members shower victims, families with outpouring of love and support after one of Michigan's worst mass school shootings

LAKE ORION — Many were not Catholic, but they arrived at St. Joseph Catholic Church on Tuesday night nonetheless — first a trickle, then a steady stream.

Soon, a sea of varsity jackets and sweatshirts emblazoned with Oxford High School’s mascot, the Wildcats, overwhelmed the vestibule of the Lake Orion parish.

Hugs were exchanged and cathartic tears were shed. Friends separated in fear hours earlier reunited, and parents consoled one another in their grief.

Earlier in the day, a gunman — alleged by authorities to be a 15-year-old Oxford High sophomore — took the lives of four Oxford students and wounded seven other people in the worst school shooting in Michigan history. 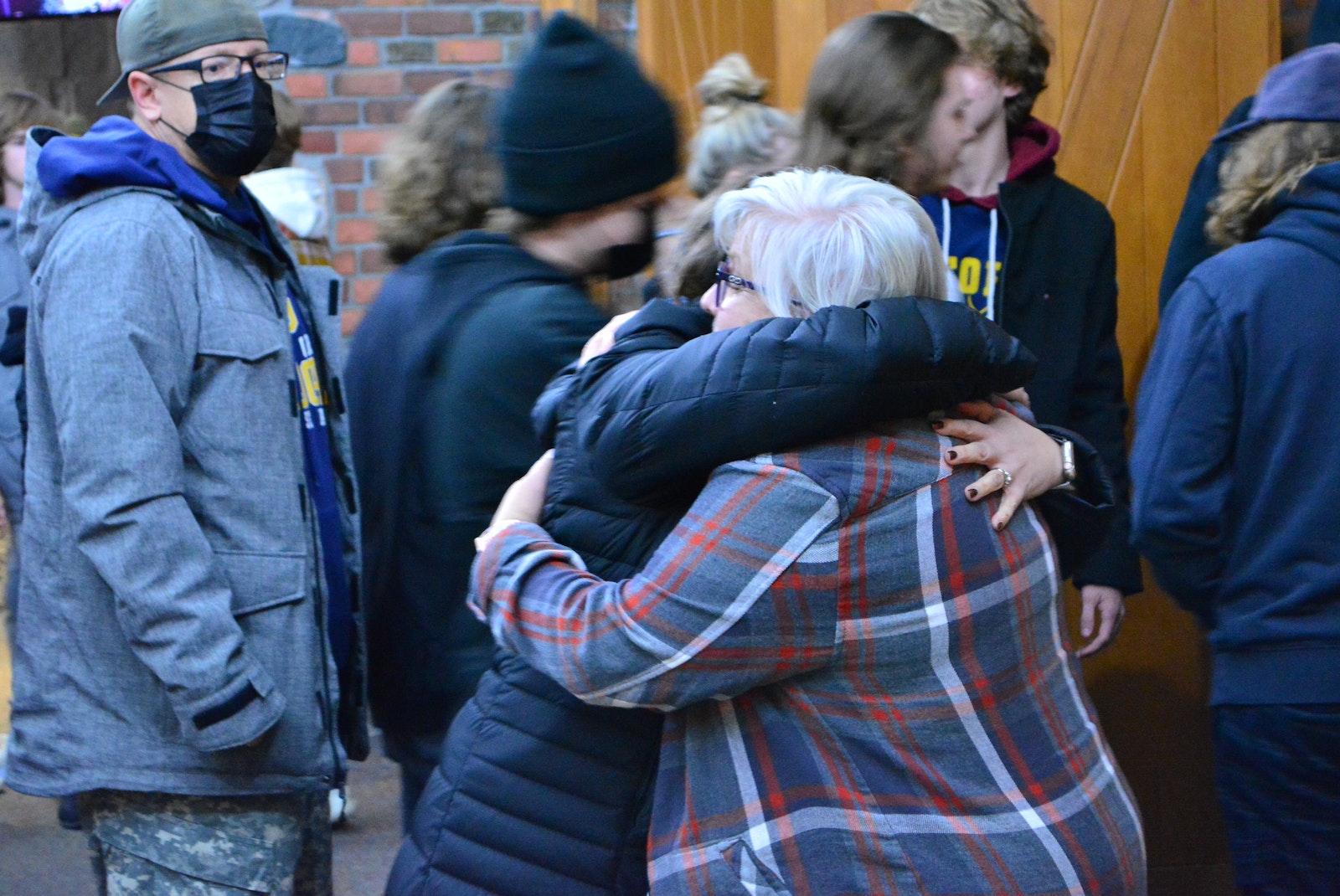 People hug one another in the vestibule of St. Joseph Parish in Lake Orion during a Mass on Nov. 30 in the aftermath of a school shooting at nearby Oxford High School. With nearly 1,800 students enrolled, the Oakland County school is one of the largest public high schools in the state.

As the community came together at St. Joseph, the closest Catholic parish to Oxford, just 4.4 miles away in neighboring Lake Orion, the parish’s regularly scheduled Tuesday evening liturgy became an impromptu occasion of healing for a community that will need plenty of it in the coming weeks and months.

“This is truly what a strong community does. We come forth. We bond together. We hug one another,” Fr. Jim Kean, pastor of St. Joseph, told the nearly 1,000 parents, students, parishioners and community members who gathered for the Mass. “We turn to those words that on a day like today aren’t particularly easy to say: ‘I love you.’ ‘How are you?’ ‘Are you OK?’”

Even as the Mass was celebrated, lights and sirens could be seen and heard on Lapeer Road outside as the investigation into the shooting continued to unfold.

Late into the evening, news reports indicated authorities were raiding the downtown Oxford home of the alleged suspect, who was taken into custody shortly after the shooting. 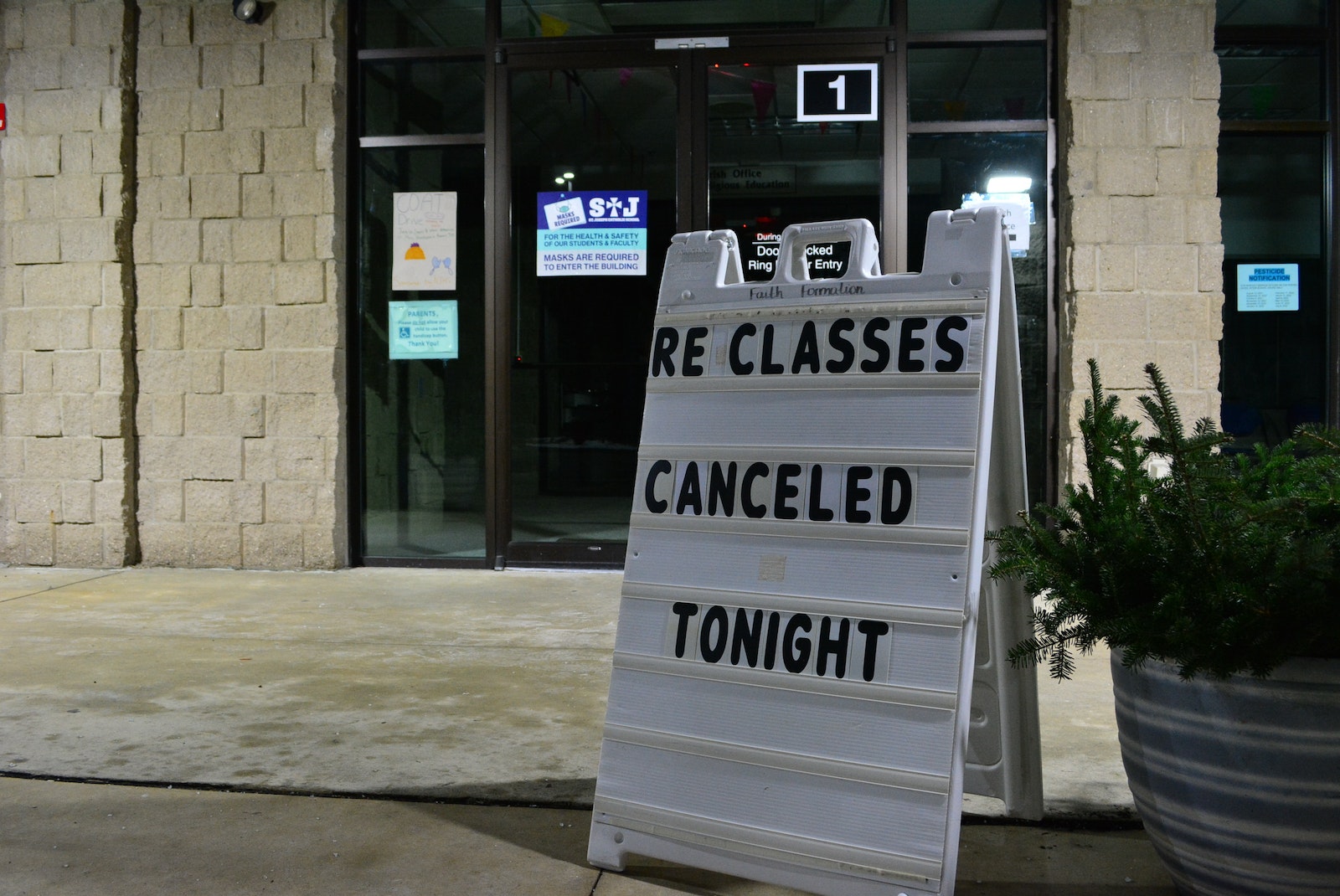 A sign outside St. Joseph School in Lake Orion alerts parents that religious education classes are canceled. Many St. Joseph families and school alumni have ties to the Oxford community.

Authorities responded to multiple 911 calls around 12:50 p.m. at the public high school, located about 45 miles north of Detroit in northern Oakland County, as reports of an active shooter began to leak out into the community.

According to police, the suspect — who has not yet been identified — fired 15-20 rounds from a semiautomatic handgun in approximately five minutes before surrendering to authorities. Late Tuesday, authorities identified three students killed as 14-year-old Hana St. Juliana, 17-year-old Madisyn Baldwin, and 16-year-old Tate Myre. On Wednesday afternoon, a fourth deceased victim was identified as 17-year-old Justin Shilling. The seven others wounded — including six students and a teacher — were transported to nearby hospitals, with three in critical condition as of Tuesday night.

As panicked parents frantically tried reaching their children at the school, many turned to social media for information.

John Wurges, who attended the Mass at St. Joseph, said his daughter, an Oxford High student, was home from school Nov. 30 after breaking up with her boyfriend.

“Her and I were in the living room talking when she looked at her phone and saw what was going on,” a visibly shaken Wurges, who isn’t Catholic but attended the Mass out of a sense of solidarity with the community, told Detroit Catholic. 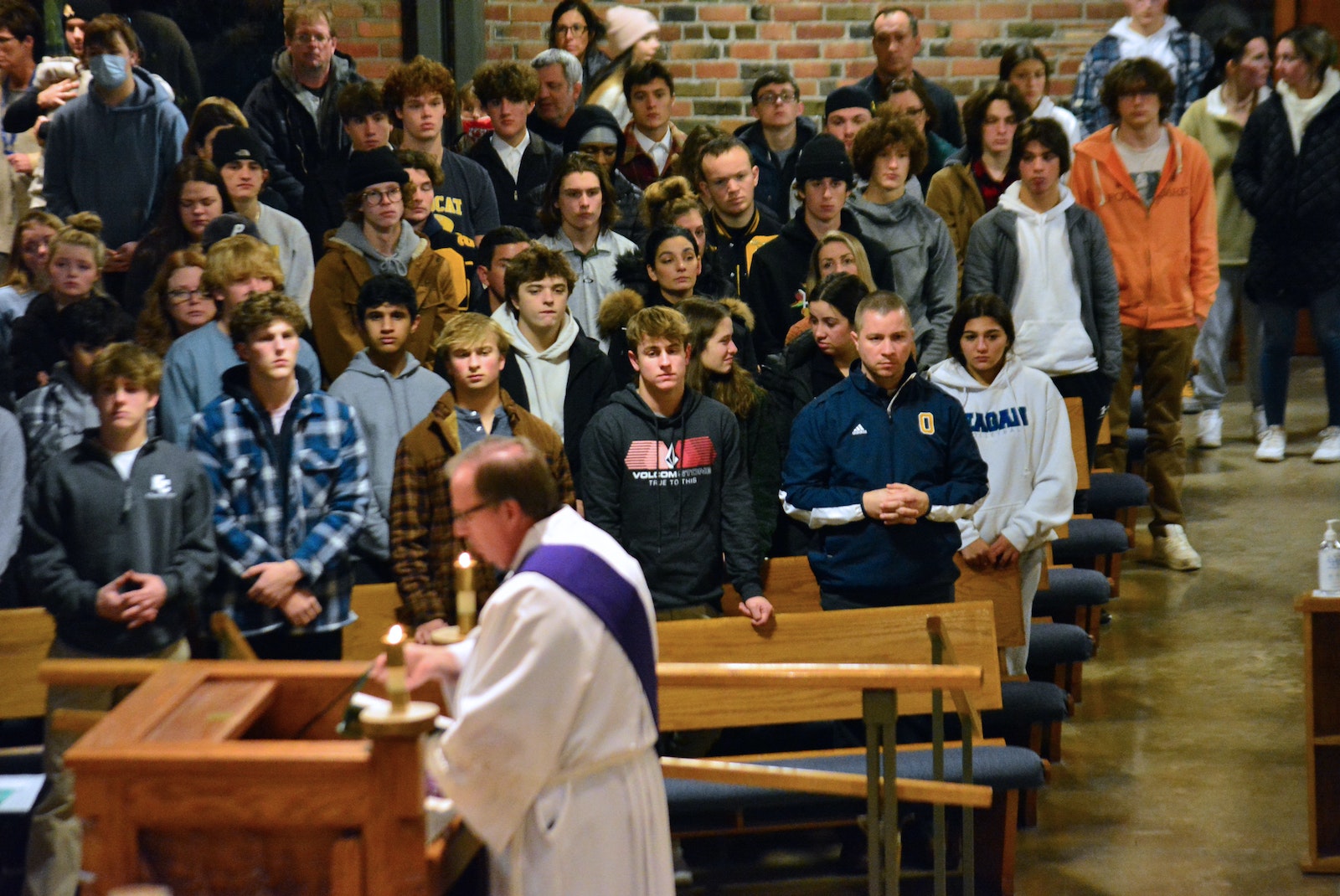 Wurges said a fellow parent was having difficulty reaching his own daughter, one of Wurges’ daughter’s friends, and asked for help. After a few text messages, the girl was discovered to be safe, having hidden in a closet at the school.

“It’s crazy what's going on. For this to hit our community is just devastating,” Wurges said. “We're gonna have to stick together. We’ve got to find a way to keep our kids safe.”

In the aftermath of the shooting, students were evacuated to a nearby Meijer supermarket, which subsequently closed to customers and served as a hub for parents to pick up their children.

After hearing of the shooting, Fr. John Carlin, associate pastor at St. Joseph — which locked down its own grade school as a precaution — went to the supermarket to offer whatever spiritual and emotional support he could.

“Something told me as a priest, as a father to the community, that I was supposed to be there,” said Fr. Carlin, who celebrated the Nov. 30 Mass. 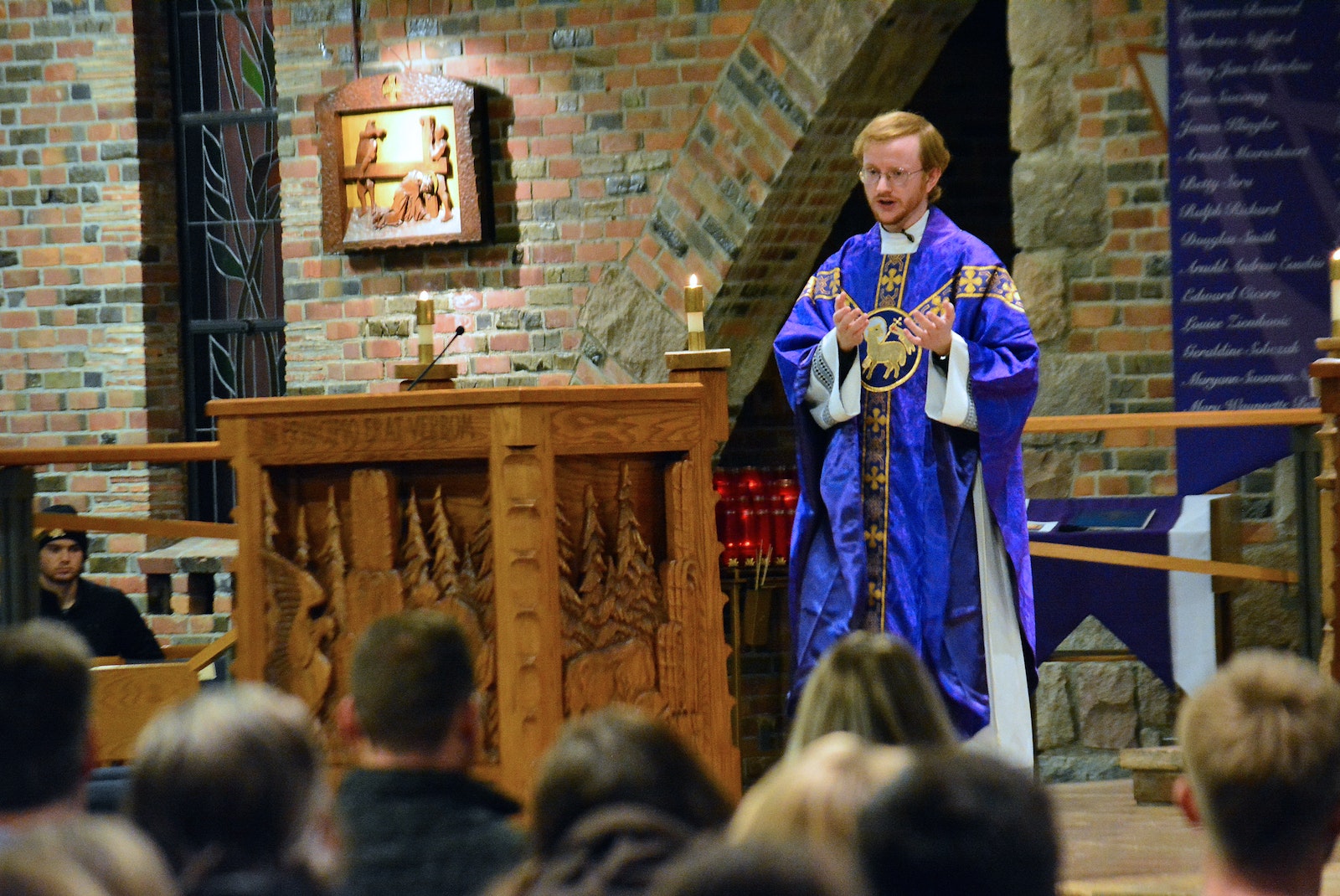 St. Joseph associate pastor Fr. John Carlin consoled those present, telling them Jesus' victory on the Cross will conquer all sadness and suffering, despite the pain that exists now.

During his homily, Fr. Carlin consoled students and families, assuring them that God hears their prayers and cries and that nothing is stronger than Jesus’ victory over death.

“Every time we experience a loss of friends or loved ones or something we don’t understand, the Lord wants not only to walk with us in that darkness, but to let us know that He is there,” Fr. Carlin said. “He’s not going anywhere, and He never will.”

After the liturgy, several remained inside the parish for Eucharistic adoration, while Fr. Kean, Fr. Carlin and clergy from St. Joseph counseled students, parents and parishioners and offered confessions to those who wanted it.

At the end of the Mass, Fr. Kean acknowledged the difficulty of facing friends and loved ones in the aftermath of a tragedy, even mustering the courage to say, “I love you.”

“We recognize that these words are hard because of the love we feel surrounding us,” Fr. Kean said as students in the congregation broke down in tears. “Even simple gestures, when people extend their thanks and appreciation to you or let you know that they're thinking of you, those waves of emotion can hit you again.” 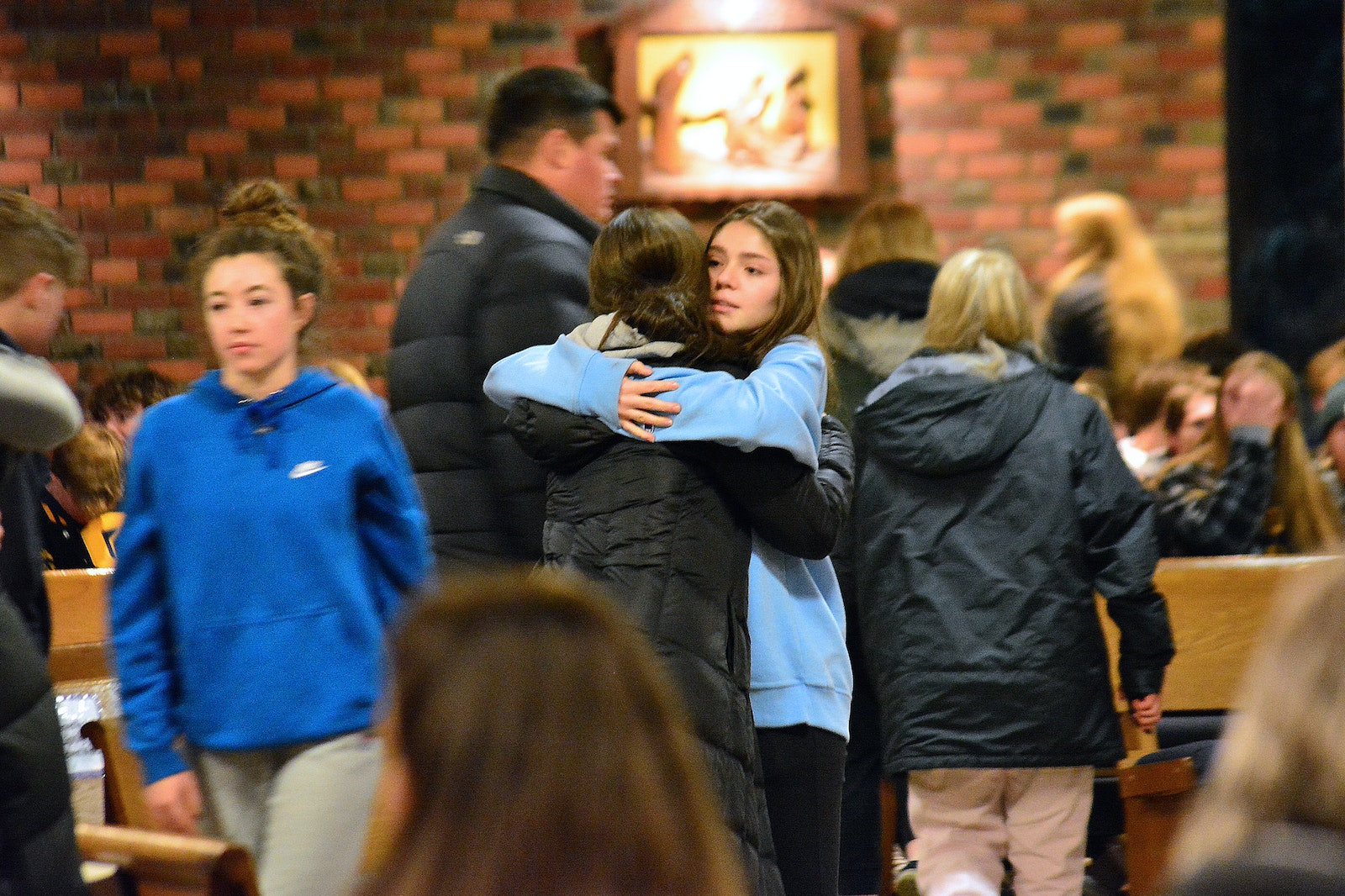 “We recognize that these words are hard because of the love we feel surrounding us,” Fr. Kean said.

Fr. Kean said he received a call from Detroit Archbishop Allen H. Vigneron, who was audibly concerned for the community’s wellbeing and sent his prayers for the victims and their families.

“As Archbishop Vigneron spoke to me, you could hear the emotion catching up with him a bit,” Fr. Kean said. “But it brings us together to have that emotion. It gives us a fuller sense of comfort to know that so many are praying for us, and though they are far away in distance, they’re near to our hearts.”

Among those praying was Gage Harris, an alumnus of St. Joseph School who has friends in the Oxford community. Harris, now a sophomore in college, said his brother knew one of the victims, Myre, a member of the football team.

“My heart goes out to the families that are suffering right now,” Harris said. “And I hope that they can get through this because this is a really tough time for our community.”

“We're strong. We're bonding. We're here for one another,” Harris added. “When you see people here praying for you, it gives you that hope back. Even when you feel like everything is gone, you know that you have something to turn to and that God is always there, even when it's super dark. You always have that light that God gives you.”