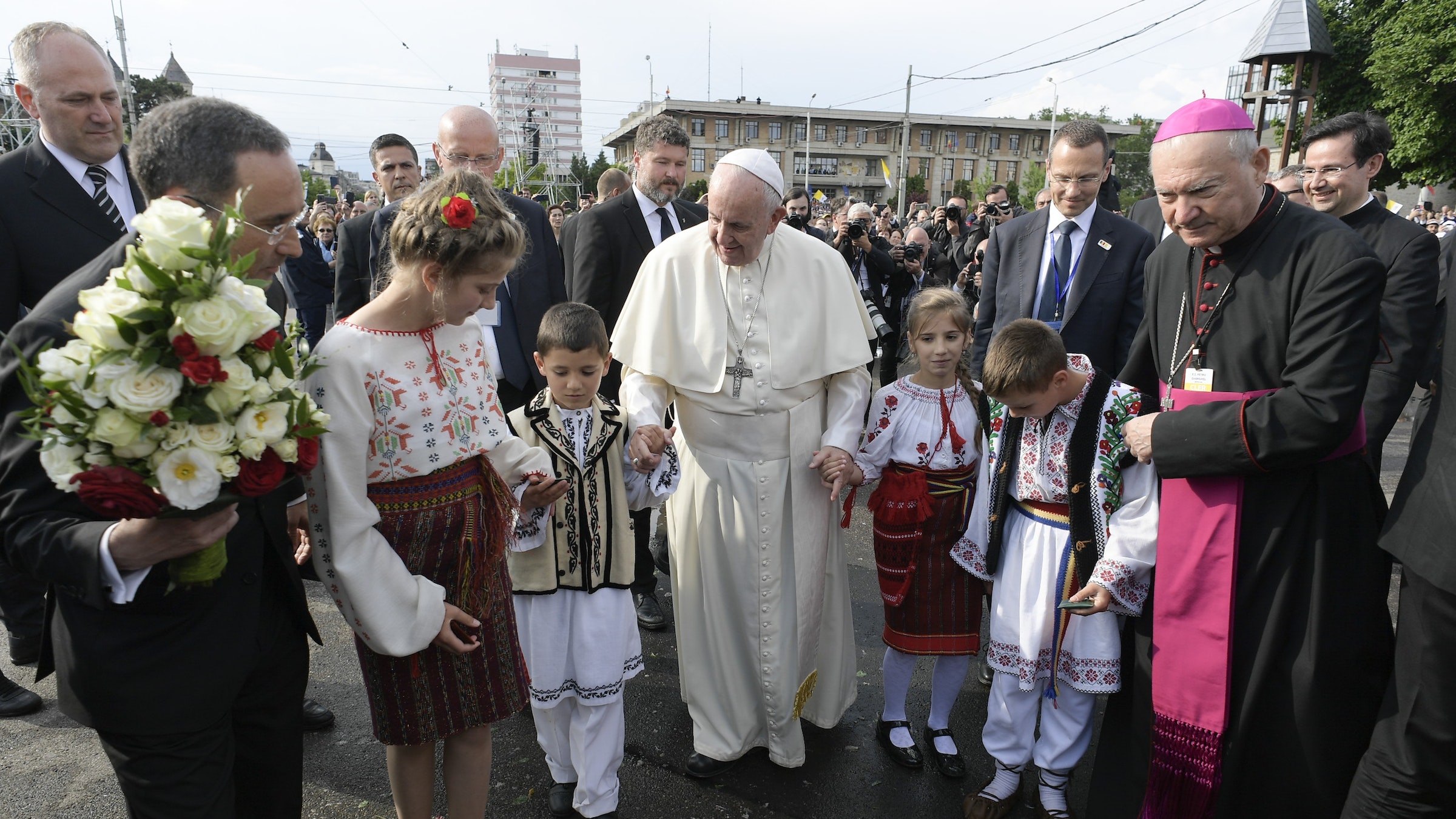 Pope Francis walks with children as he arrives for a Marian gathering with young people and families in the square outside the government Palace of Culture in Iasi, Romania, June 1, 2019. (CNS photo/Vatican Media)

VATICAN CITY (CNS) — Catholics must draw inspiration and strength from the roots of their faith and the traditions and experiences of their faith communities, but without trying "to hide there because they are afraid of growth," Pope Francis said.

Meeting May 19 with students, priests and staff from the Pontifical Romanian College, where seminarians and priests from Romania's Eastern-rite Catholic Church live while studying in Rome, the pope encouraged them to remember always the sacrifices of the priests, bishops, religious and faithful who went before them.

After World War II, "when the Romanian Greek Catholic Church no longer had any active bishops because they had been killed or imprisoned," the pope said, "Bishop Ioan Ploscaru of Lugoj, who was imprisoned for 15 years, wrote in his diary, 'The priests and bishops of the Greek Catholic Church considered this period as the most precious of their existence. It is a grace to be able to offer to God one's sufferings and the testimony of one's faith, even at the cost of one's life.'"

"Those who give their lives for the sake of the Gospel think this way, embrace God's response to the evil in the world: They surrender themselves, they imitate the meek and gratuitous love of the Lord Jesus, who offers himself for those near and far," Pope Francis said.

Roots of that kind allow a tree "to grow strong and bear fruit," the pope said. "You are that fruit."

Without acknowledging, studying and being grateful for that history, he said, the church cannot grow.

Faith is endangered, he said, when "one focuses more and more on oneself, on one's own belonging, losing the dynamism of one's origins."

"Staying with the metaphor, it is like pausing to look at the trunk, branches and leaves, forgetting that everything is supported by the roots," he said.

Remembering the fidelity of the Romanian Catholics despite decades of harsh persecution by the communists should be an antidote to any temptation of settling for "a mediocre, self-referential life of careerism, climbing, seeking personal satisfaction and easy pleasures."

Pope Francis paid tribute to Cardinal Lucian Muresan, major archbishop of Fagaras and Alba Iulia, who will celebrate his 91st birthday May 23.

His years of service "began almost 60 years ago in a humble basement after the surviving bishops were released from prison," he said. He and the other priests of Romania were "poor in things, but rich in the Gospel."

Pope Francis urged the students and priests of the college to be like them, "joyful apostles of the faith you have inherited, willing to keep nothing for yourselves and ready to reconcile with all, to forgive and to weave unity, overcoming all animosity and victimhood."