Hundreds comfort one another, grieve together at Mass after shooting 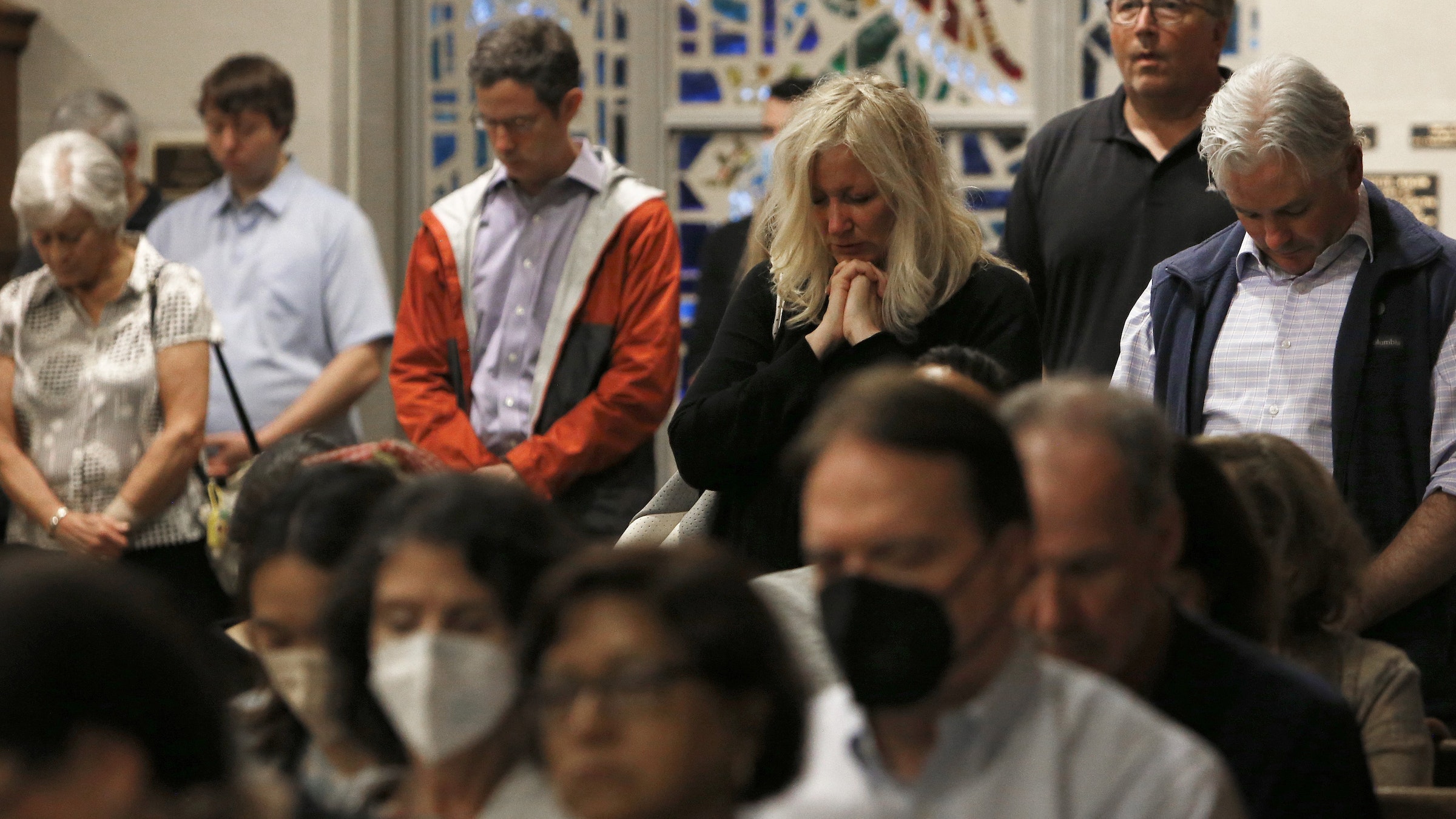 HIGHLAND PARK, Ill. (CNS) -- Hundreds of people gathered the evening of July 5 at Immaculate Conception Church in Highland Park to offer one another comfort and grieve together in the wake of the mass shooting that killed seven people and injured dozens more at the community's Independence Day parade.

Immaculate Conception-St. James Parish, which counts two of its members among the dead, is headquartered at the church less than a half-mile from the shooting site.

Chicago Cardinal Blase J. Cupich, who celebrated the Mass, said the Gospel reading from Matthew about Jesus healing the woman with the hemorrhage and raising a little girl from the dead highlights the healing power of grace.

It was the same Gospel reading that was proclaimed in churches on the morning of July 4, when the shooting shattered the peace of the suburban community.

"It is striking how the healings come in such simple, uncomplicated ways," Cardinal Cupich said. "The touch of Jesus' cloak and a comforting word to the woman; the taking of the little girl's hand and lifting her up from her sick bed. These scenes remind us that God's grace most often comes in simple and very natural human actions."

Such actions include coming together to pray for the dead, those who loved them, the wounded and everyone who was there, as well as emergency personnel, medical workers and civic leaders who responded to the shooting.

The cardinal told the story of a young boy who sat with an elderly, widowed neighbor. When the child's mother asked what he had said to the grieving man, the child said he hadn't said anything; he only helped the man cry.

"God's comforting grace comes in such simple gestures," he said. "We have no words to make sense of this senseless tragedy. We are here just to help each other cry, to lift up each other by the hand, to let other's touch us with their suffering and pain."

The cardinal also called on government leaders to restrict access to high-powered firearms like the rife used in the July 4 massacre.

"Yesterday, citizens of Highland Park took pride in being Americans, Americans who just wanted to celebrate our nation's 246th birthday," Cardinal Cupich said. "Yet, instead of families marching in a parade, parents were force to cradle their children in their arms and flee violence in the streets.

"Instead of fireworks, rapid gun fire filled the air. Instead of a celebration of freedom and liberty, people were victimized by our nation's enslavement to guns. Instead of a day to celebrate peace and freedom, a weapon of war and terror ruled the day."

Restricting such weapons should be a simple decision, the cardinal said, drawing applause from the congregation.

"We cannot allow the debate over securing society's safety through reasonable laws that govern the possession of firearms to become overly complicated," he said. "We should not make this so difficult. Whatever one makes of the right to bear arms, it should not paralyze us from enacting serious, broadly popular gun safety measures."

Cardinal Cupich said the right to bear arms "does not eclipse the right to life, or the right of all Americans to go about their lives free of the fear that they might be shredded by bullets from weapons of war at any moment."

"Gun violence is a life issue, and high-powered weapons have no place on our streets," he said.

The cardinal also read from a telegram he received from Pope Francis the morning of July 5, expressing the pope's "spiritual closeness" to all those affected by the attack.

"Let our prayer be that of Pope Francis, who sent us his message of support this morning: 'With unwavering faith that the grace of God is able to convert even the hardest of hearts, making it possible to depart from evil and do good, may every member of society reject violence in all of its forms and respect life in all of its stages,'" the cardinal said.

After the Mass, Cardinal Cupich reminded members of the media that Pope Francis also had written to him in 2016 about the scourge of gun violence, and that it is a topic the cardinal and the pope have discussed at length.

Cardinal Cupich also commended Father Hernan Cuevas, pastor of the newly united Immaculate Conception-St. James Parish, for his response and for his hospitality, offering the cardinal the opportunity to celebrate Mass with Auxiliary Bishop Jefferey S. Grob of Chicago and retired Auxiliary Bishop George J. Rassas of Chicago, along with priests from all over their archdiocese who came to offer support.

He was on a float celebrating the new parish, with an image of Mary on one side and St. James on the other, waiting to turn on to the main parade route, when he heard the shots.

"We were so excited to show that our new parish was ready to serve the community at large," Father Cuevas said.

But then a gunman opened fire from a rooftop a few blocks from where the float was waiting, and then people came running "like a wave," Father Cuevas said.

Father Cuevas and others on the float parked it in the church lot, less than a half-mile from the site of the shooting, and sheltered in the church and prayed the rosary, he said.

"I do believe that in moments like this, the community relies on the love of God," he said.