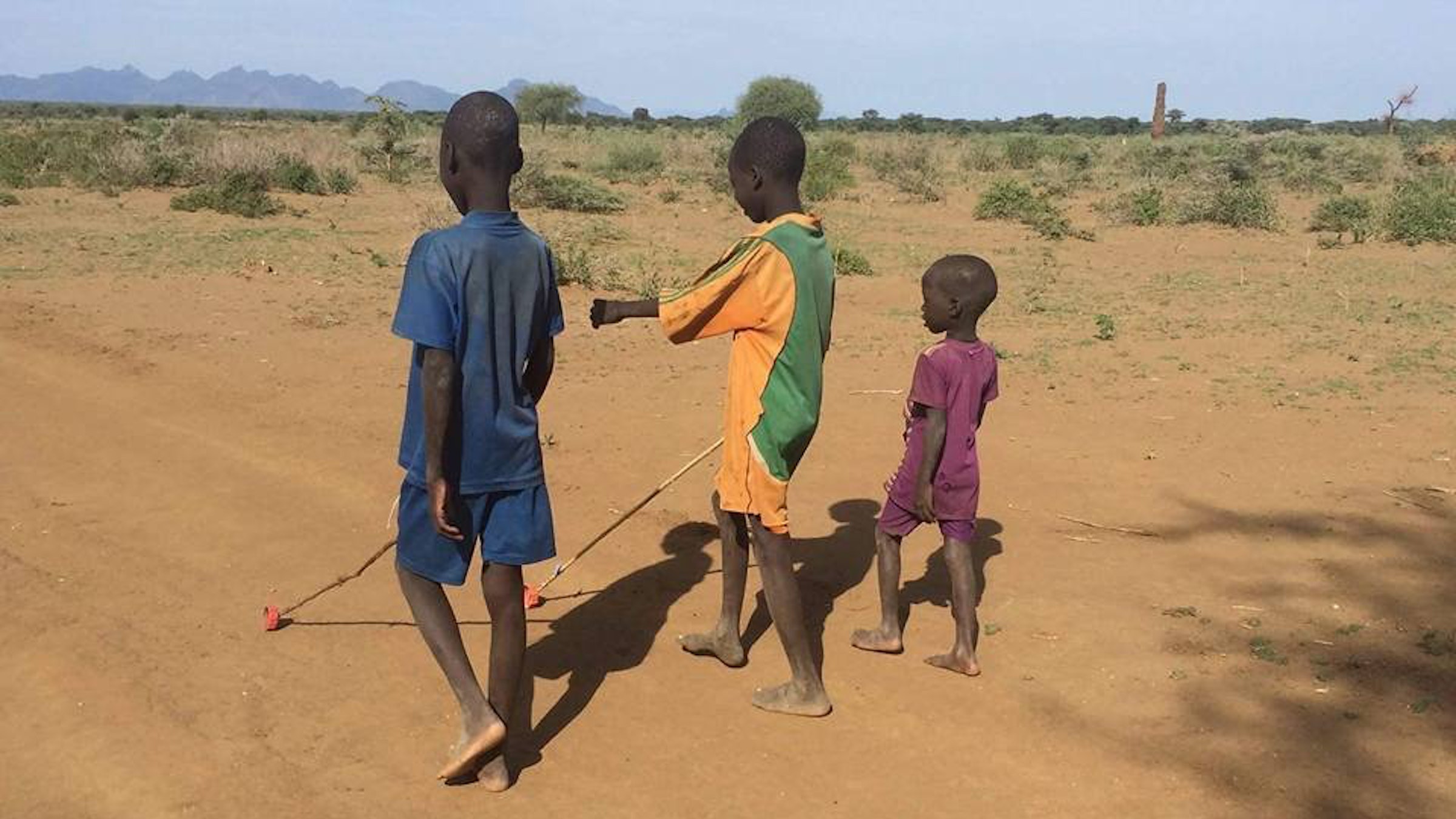 Children are pictured in a 2017 photo walking along a dirt road in Torit, South Sudan. Religious leaders have cited psychological effects of violence as the major reason for the rise in the number of children and young adults abusing drugs. (CNS photo/Tonny Onyulo)

JUBA, South Sudan (CNS) –– On the streets of Yei in southern South Sudan, dazed youths meet for their daily dose of cocaine and marijuana. Others are seen in neglected structures consuming alcohol and using illegal substances.

John Sebit is one of them.

"I don't know how I found myself in the street," said the 20-year-old who has used a variety of drugs while on his own for the last three years. "I have no one to take care of me. I lost all my parents and some of my siblings.”

Sebit is haunted by the memories of what he experienced in 2017 when the South Sudan army raided his family's home in the middle of the night, dragged out his parents and shot them. His sisters were raped and two of his brothers were kidnapped, he told Catholic News Service.

"I still remember and get flashbacks of everything that happened that night. Whenever I think how they killed my people, I cry," he said. He escaped by hiding in a water storage tank.

"When I use drugs ... it makes me go high and I forget my problems," he explained.

Sebit's story is far from unique. Thousands of young people have turned to cannabis, cocaine, heroin, alcohol, tobacco and khat, a plant that releases a stimulant when it is chewed. The result has been slowed social and economic development for a significant number of young people.

Religious leaders have cited psychological effects of violence as the major reason for the rise in the number of children and young adults abusing drugs.

In December 2013, South Sudan, a country of more than 11 million people, descended into civil war following a political struggle between President Salva Kiir and then Vice President Riek Machar. The conflict evolved into an ethnic battle between the country's two largest tribes – the Dinka, to which Kiir belongs, and the Nuer, to which Machar belongs – after Kiir fired Machar.

"The majority of youths are using drugs and alcohol to help them forget the violence they have gone through, such as the loss of their loved ones and forced displacement caused by war," James Kenyi, a catechist in the Diocese of Yei, told Catholic News Service. "Others have no place to live, and they end up in the streets (using) illicit drugs to cope with stress.”

Fr. Tom Poru Martin of Christ the King Parish in Yei agreed, saying the COVID-19 pandemic has led to worsening conditions for young people because schools were closed, leaving them with little to do but be on the streets, where drugs are readily available.

In a bid to help recovering drug users regain hope and overcome their addiction, priests throughout South Sudan are running programs that offer psychological and social support for displaced and orphaned children, reintegration programs for children living on the street and counseling services.

Fr. Martin, for example, has launched an awareness campaign to raise awareness about the dangers of illicit drugs. Since early in 2021 the Diocese of Yei has trained dozens of people with basic skills to identify and manage the drug abuse among the youth.

"The people we have trained are helping us by talking to the youths about the dangers of drugs in their lives," he said. "We have also tried to keep them busy by engaging in sports. The strategy works well as it keeps youths away from using drugs.”

Kenyi said the Yei Diocese has been involved in outreach that involves going to the places where drug users abuse drugs. For those who have been on drugs for a long time or are visibly ill, workers transport them to a hospital for treatment, he said.

"When I reach the drug users, I try to convince them about the dangers caused by the drugs, particularly heroin, which they seem to have easy access to despite it being a very dangerous substance," Kenyi said.

The South Sudanese government has lauded the church for helping end drug use.

"The war against drug abuse can be won through partnership among residents, victims, church and law enforcement agencies," he said.

Sebit said he and other young people believe that peace is the solution to drug abuse. He called on the government and the broader international community to step up efforts to achieve lasting peace.

"Without peace in the country youths are going to continue engaging in drugs because a majority of them are idle due to lack of employment and closure of schools," he said.

"We can't go back home because of the war, and our future is uncertain because we are not going to school. We want peace.”