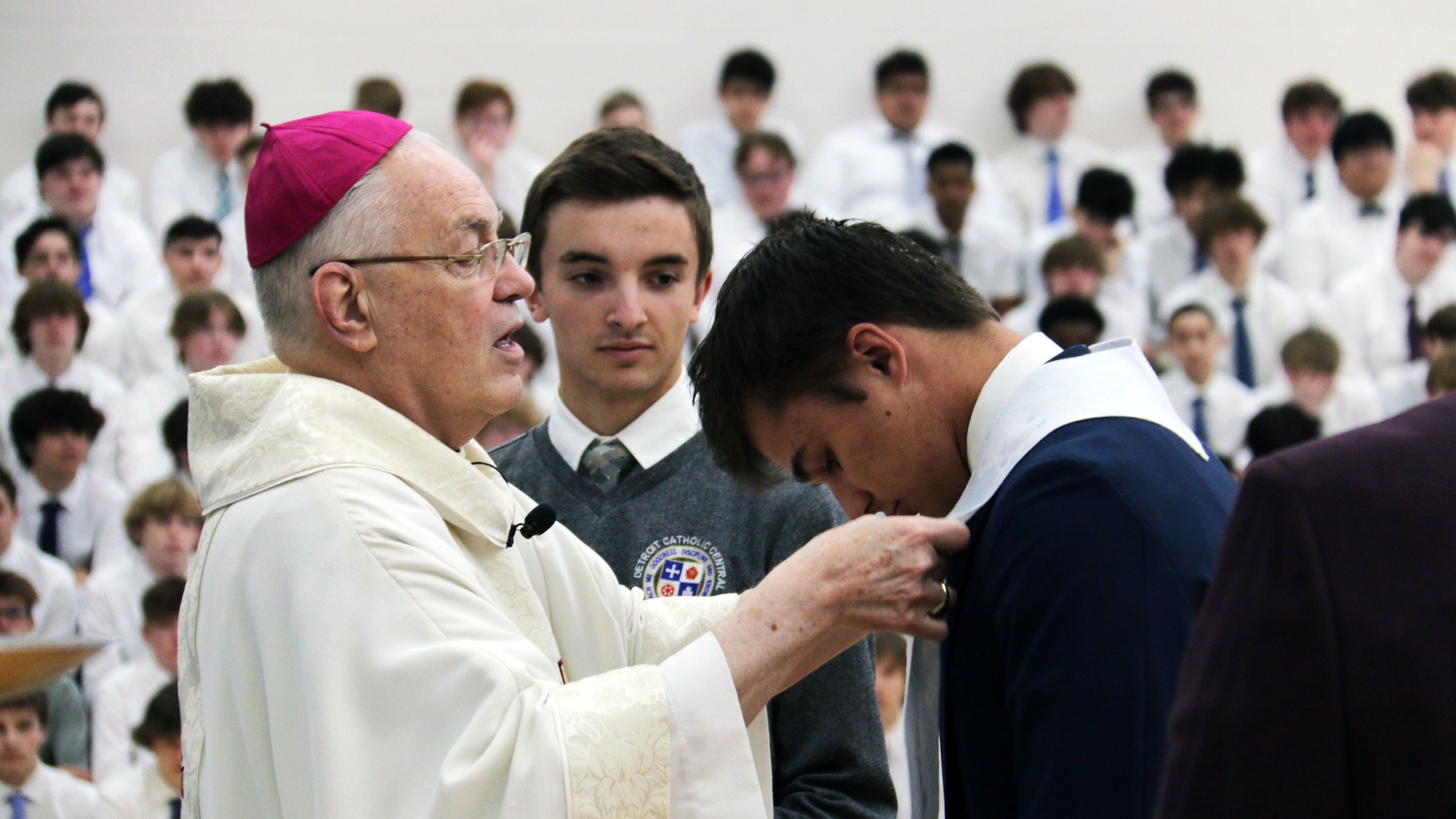 NOVI — Teens spend most of their waking hours during the week at school; it’s where they learn the bulk of their social skills, are challenged academically, develop hobbies and virtues through extracurriculars and sports, and form their own identities outside of their families.

At Catholic schools, they can also encounter Christ and develop a relationship with him.

Teachers at Detroit Catholic Central High School in Novi have committed to meeting their students where they are — literally and figuratively — to help them grow in their faith. In response to Archbishop Allen H. Vigneron's "Unleash the Gospel" pastoral letter, Catholic Central theology teachers began offering students curious about becoming Catholic or completing their sacraments the opportunity to do so within school grounds, in their theology classes among their peers.

Four young men entered the Church on April 27 during an all-school Mass in Catholic Central's gymnasium. Three of them were Catholic Central students — juniors Nick Lopez and Hayden Keeley, and sophomore, Chas Lewless — as well as one student from St. Mary’s Preparatory School in Orchard Lake, Dylan Magdich.

Auxiliary Bishop Donald F. Hanchon presided over the Mass, which also served as a farewell to graduating seniors, serenading the school with a ukulele rendition of “This Little Light of Mine,” emphasizing in his homily how faith shines a light on everything. 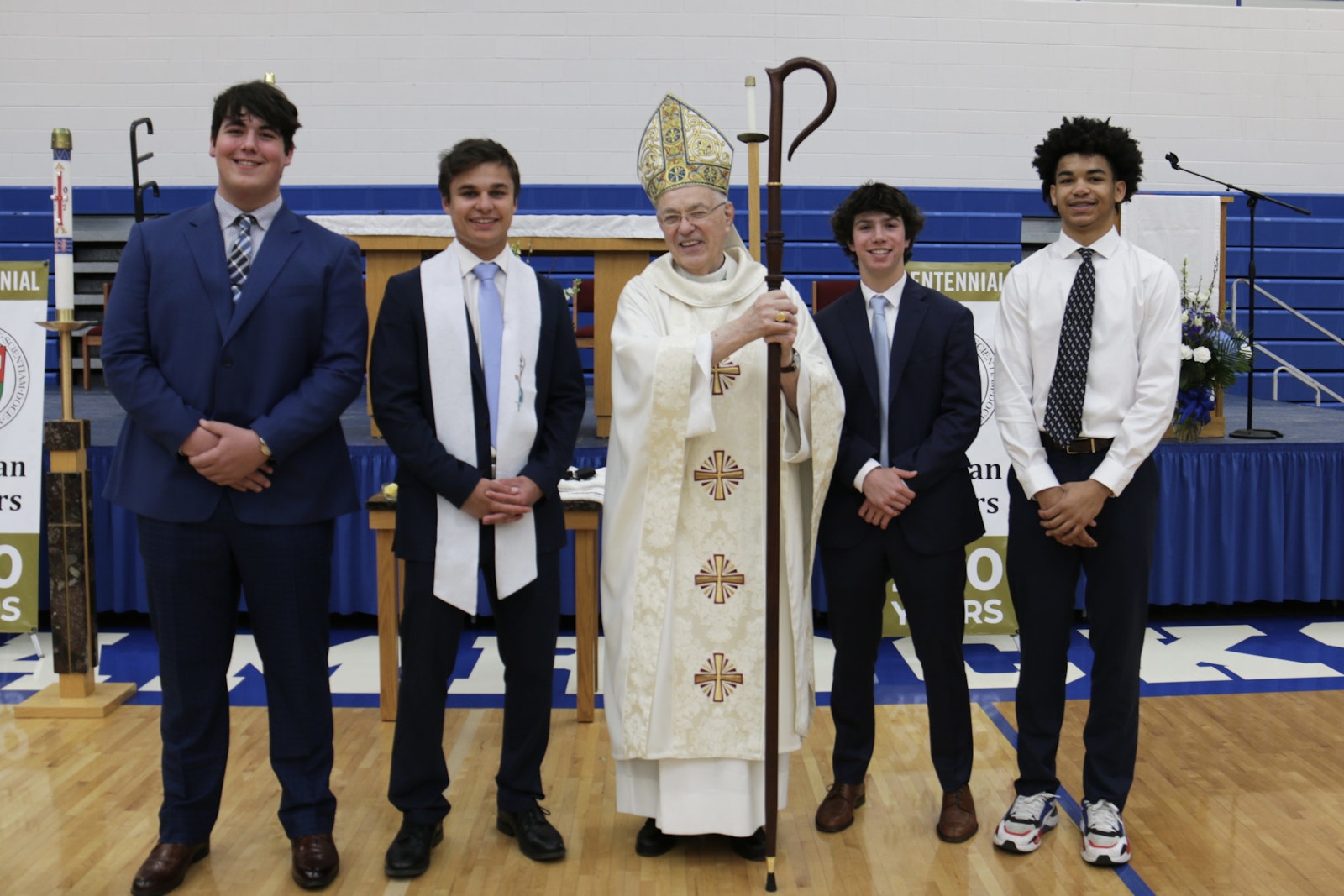 “Think of it as coming into the light,” Bishop Hanchon said to the candidates and catechumen. “God is shining the light on you. He chose you to be a member of your family and be a member of a worldwide family, a family that is here at Catholic Central and expresses itself in the relationships of friendship and brotherhood among you.”

The RCIT program (Rite of Christian Initiation for Teens) at Catholic Central was co-founded by Basilian Fr. Bill Riegal, who died last August, Basilian Fr. Dennis Noelke and Kevin Walters, the school's campus minister and theology department head. Archbishop Vigneron approved the program, and for three years, Catholic Central has been giving young men who have encountered Christ within the school’s halls a chance to learn more and grow in their faith.

“It makes sense to form them in their schools,” Walters told Detroit Catholic. “We are thrilled that there have been guys who have stepped forward to say, ‘I have had an experience where Christ has been made attractive and believable, and I want to be part of this.’”

The formation is done primarily through theology teachers and classes, which are a regular part of the curriculum, five days a week. Walters said the formation team supplements the lessons with occasional meetings during free periods or lunch hours and is primarily modeled after the RCIA program.

The program is always accessible to the students but not forced — interested students are encouraged to talk to their theology teachers.

Theology teacher Colin Whitehead discovered that one of his students, Nick Lopez, wanted to be Catholic during a routine assignment in his fall junior-level theology class.

“I ask my students to write a statement of faith essay — and he wrote me that he has really enjoyed his theology classes, but wish(ed) that all of this formation he has had in class could count toward becoming Catholic,” Whitehead said. “He really wish(ed) he could receive his first Eucharist and confirmation."

Whitehead was excited to read the essay — it’s not often students approach their high school theology teacher with a revelation like this, he said. 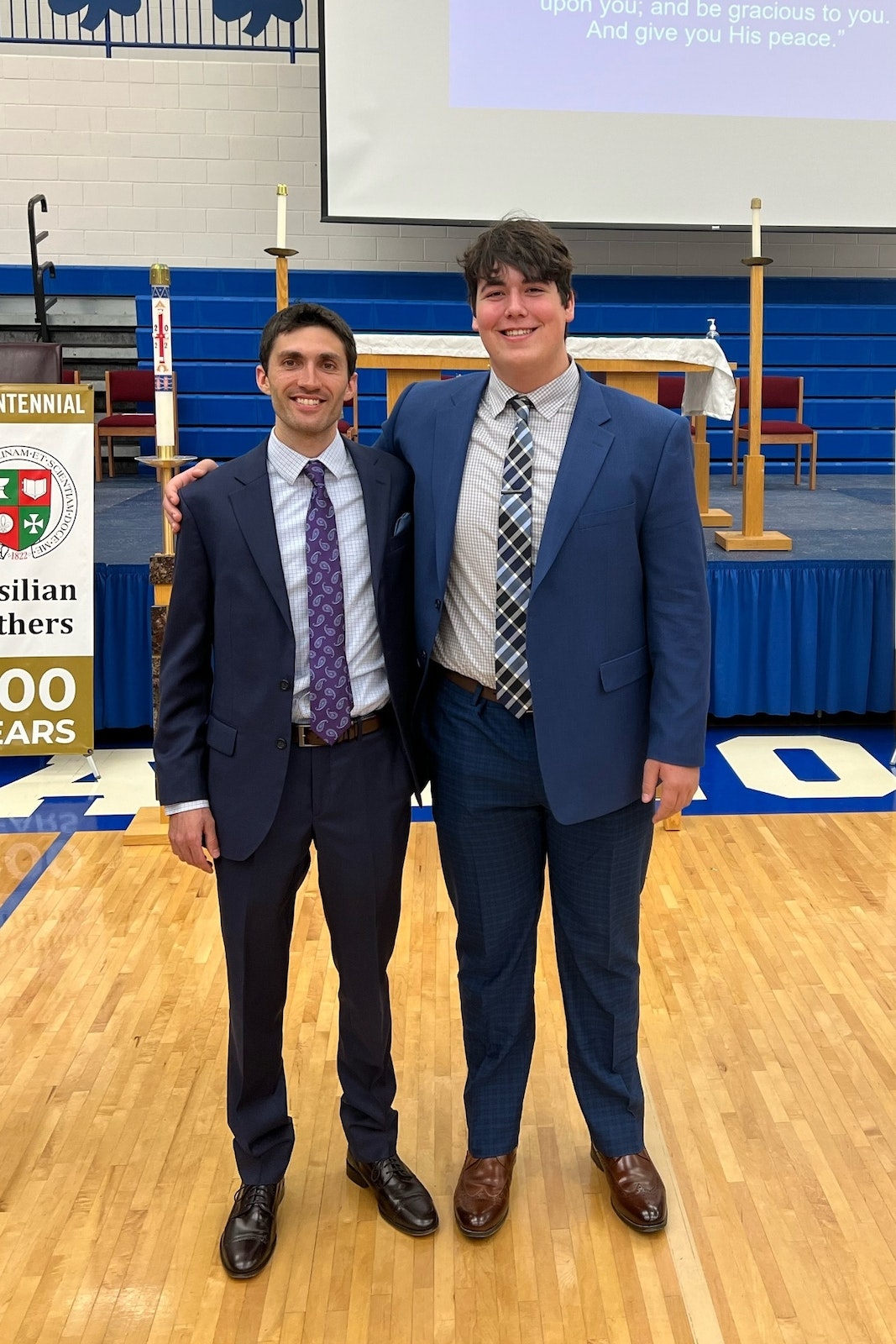 Theology teacher Colin Whitehead, left, is a Catholic Central alumnus who served on the formation team and was Keeley's confirmation sponsor. (Photo courtesy of Colin Whitehead)

“Before Catholic Central, I knew the basics of Christianity, and then through my religion classes, I started to learn more and more about the Catholic faith,” Lopez, 17, explained to Detroit Catholic. “In that essay, I mentioned that I would like to receive the sacraments because I fully believe. I am very appreciative of the journey and what CC is doing for me (especially) because I am making the decision later in my childhood.”

Prior to starting at Catholic Central as a freshman, Lopez said he would attend a Methodist church service twice a year with his grandparents. As a freshman, he said, he began to see the importance of the Mass.

“I wanted to become part of a brotherhood and the Mass and be part of it,” Lopez said. “I wanted to be Catholic because throughout my classes, I have learned almost everything I know about, and I realized the importance of receiving the sacraments in my sacraments class with Mr. Whitehead, and I firmly believe everything.”

After Whitehead brought Lopez’s interest to the attention of school leadership, a call was put out to discover whether other students held similar interests, and two other students, Lewless and Keeley, did. The students met with Whitehead and other formation team members every other week during lunch period. In the spring, they ramped up their time together and began meeting weekly, discussing topics essential to understanding the faith but also giving students a chance to lead the conversation and ask questions, such as about parts of the Mass or the creed.

Students have surprised Whitehead with their invested interest in some topics; for instance, Keeley was particularly drawn to a unit on the Camino de Santiago, a pilgrimage across northwest Spain leading to the shrine of the apostle St. James the Great in the Cathedral of Santiago de Compostela in Galicia.

“Hayden fell in love with (the Camino),” said Whitehead, who also served as Keeley’s confirmation sponsor. “He was the first student and came to me and said he wanted to walk it one day. For his confirmation gift, I bought him a book on the Camino.”

In addition to the three Catholic Central students, a student from St. Mary's Preparatory School in Orchard Lake became Catholic at the same Mass. St. Mary’s doesn’t have the same RCIT program, but theology teacher Paul Stuligross was determined to help Magdich use his formation at school to become Catholic. Magdich was the only one of the four young men to receive all three sacraments of initiation during the Mass.

“It really doesn’t matter what school they get baptized in,” Stuligross said. “If they want a closer relationship with Christ through baptism, let's get it done. Isn’t that the whole end game of theology? Moving that theological information from the head to the heart?”

Stuligross emphasized the importance of meeting students where they are — their time in school might be the only time when they are encountering Christ on a deeper, theological level, leading to a personal relationship with Christ later on, he said. 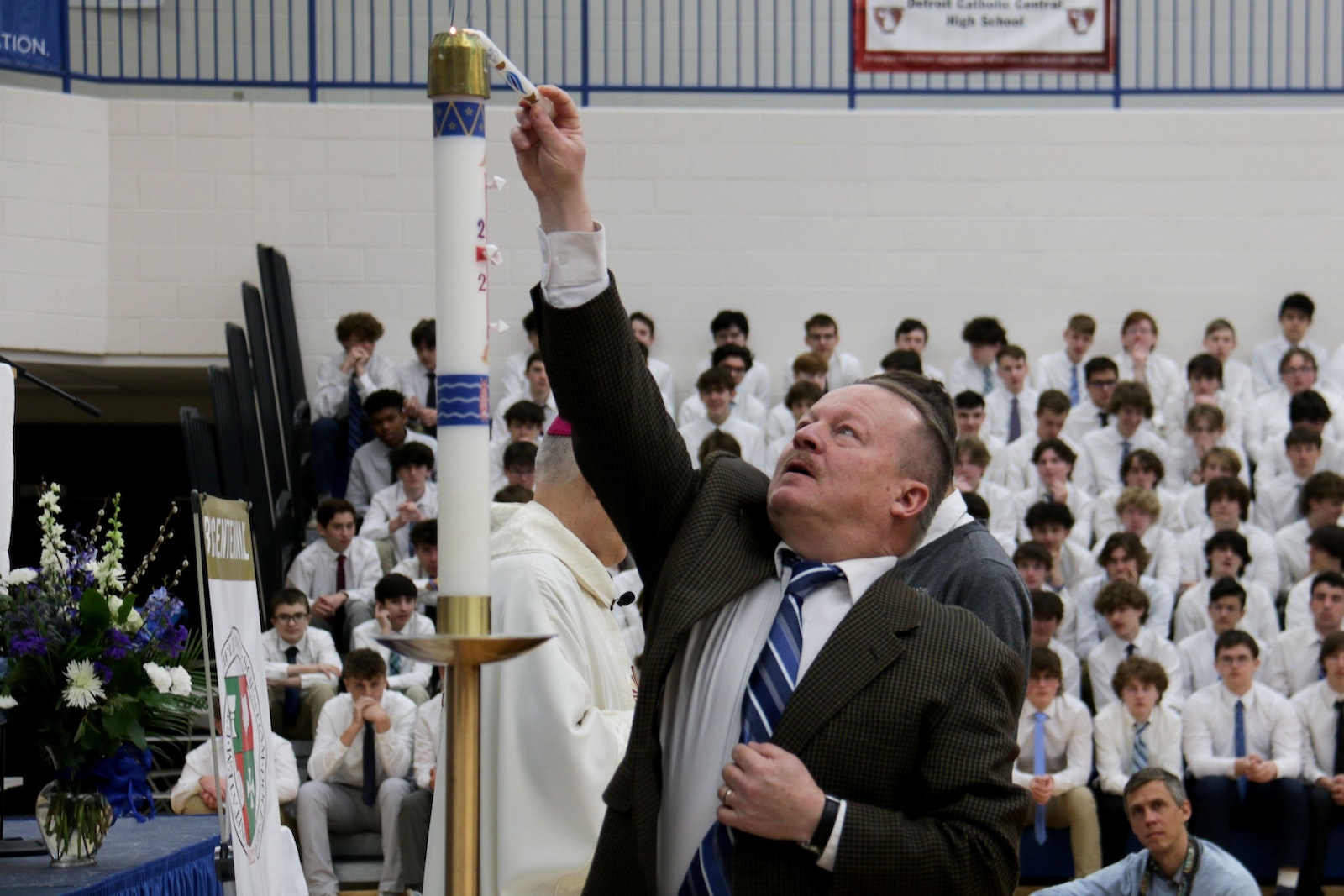 Paul Stuligross, a theology teacher at St. Mary's Preparatory School in Orchard Lake, lights the Easter candle during the Mass at Catholic Central. Stuligross said that theology class is a perfect place to meet students where they are in their faith.

Stuligross said that, in his experience, many students are not practicing their faith beyond school — but theology classes are where teachers can help students encounter Christ.

“I think having the ability to engage them in the theology classroom and having an environment where other teachers support that, whether it is theology or history or math, is imperative to these kids' faith,” Stuligross said. “I can’t think of a better way to unleash the Gospel than to have kids bring their families back to the faith, and this can happen through Catholic schools.”

According to Walters, young men are drawn to the faith at Catholic Central because of the school's unapologetically Catholic environment. Approximately 85 percent of the school's population is Catholic, he said, but even young men who aren’t joining RCIT have been impacted by the Catholic identity of the school’s campus.

“One of our students, who is Muslim, came up to me after his freshman retreat, shook my hand and said, ‘Mr. Walters, you know I am Muslim. We see Jesus as a prophet in my faith. Now I see why you are all so fired up about him. I am going to think about him differently now because of what you shared on this retreat,’” Walters said. “Our job is like John the Baptist: to point to (Jesus). He’s the one you seek. He’s the one that you should be attracted to. He is the one who is believable, the one whom you are searching for.” 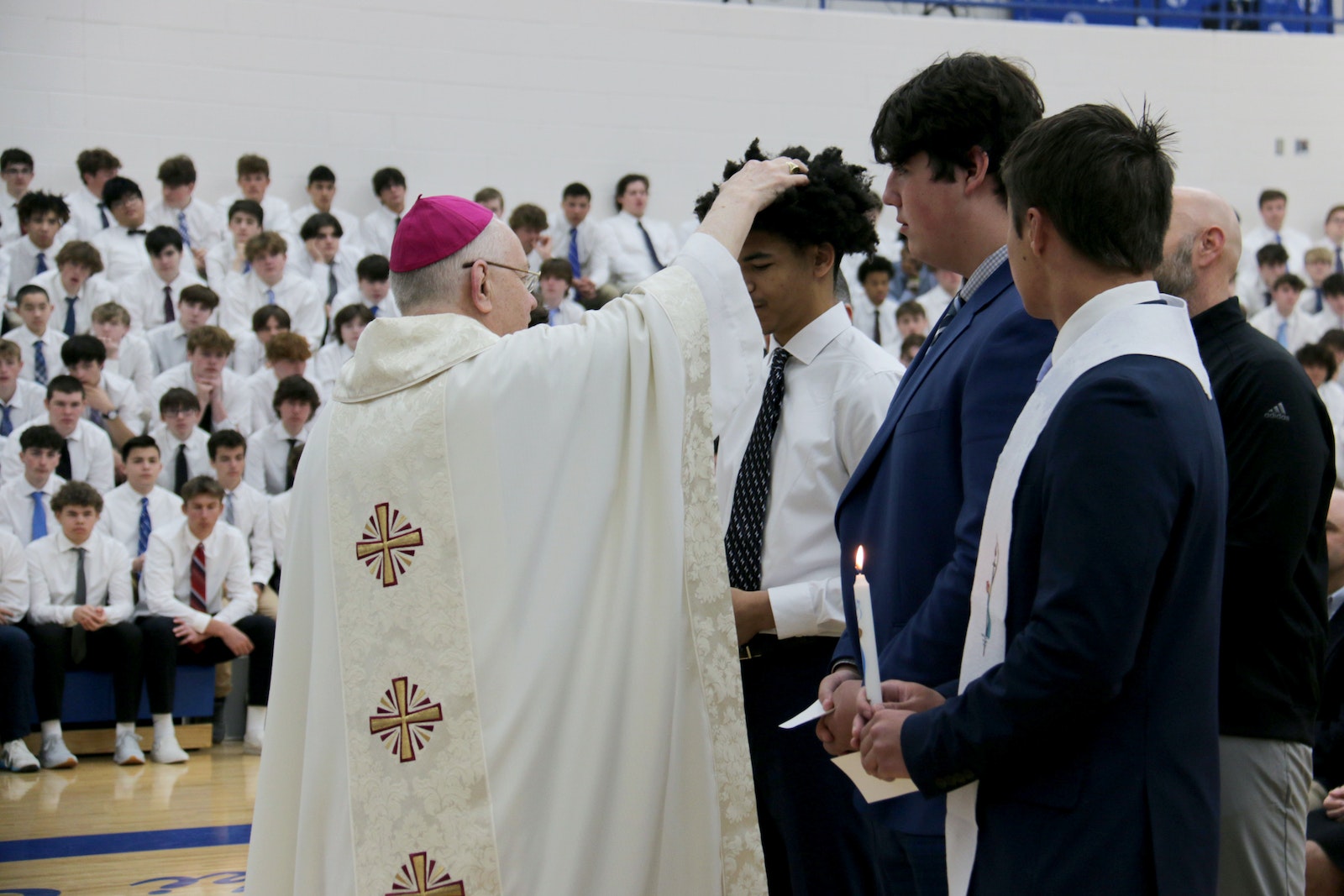 Bishop Hanchon consecrates the heads of the newly confirmed students with holy oil. Although the formation is led by theology teachers, Whitehead believes the young men were drawn to the faith because of the influence of their high school peers.

Whitehead believes the young men have fallen in love with the Catholic faith for a variety of reasons, one of which is the influence of their peers.

“In my mind, one of the reasons the archbishop gave us permission to do this is because it honors the community that they’ve come from,” Whitehead said. “They’ve emerged with this desire to enter into full communion amidst their peers. If desire arose because of what they’ve seen in their peers, it just seems fitting that they get to continue their formation with their peers and they get to come into the Church in front of their peers.”

Whitehead, a 2013 Catholic Central alumnus, said he has never seen anything like this at the school before.

“It has been amazing to see what the Holy Spirit is doing at our school and among our students," Whitehead said. "This didn't exist when I was a student, so it totally caught me by surprise. I am excited to see where we go from here.”