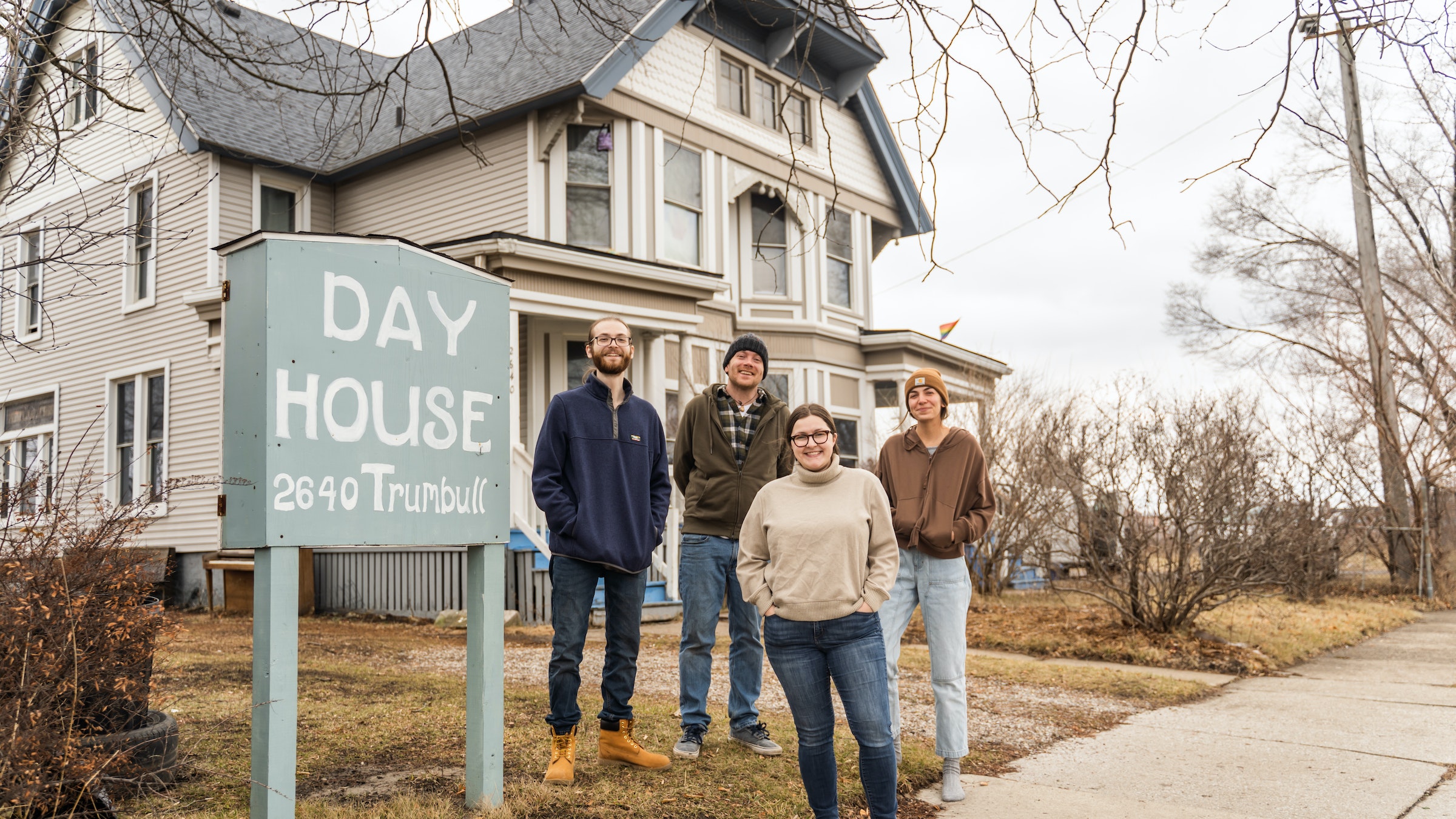 Jordan Kennedy, front, and a small group of friends have taken over the day-to-day operations of the "Day House," a Catholic hospitality house in Detroit's Corktown neighborhood. The community is part of the Catholic Worker movement, co-founded by Dorothy Day in the 1930s. The Detroit Day House, which is one of more than 200 Catholic Worker communities worldwide, was established in the 1970s by Fr. Thomas Lumpkin. (Photos by Valaurian Waller | Detroit Catholic)

Hospitality house in Corktown is part of the Catholic Worker movement, co-founded by Dorothy Day in solidarity with the poor

DETROIT — When Jordan Kennedy and several of her friends felt a calling to work with the hungry, homeless, sick and imprisoned, they knew what they wanted to do wasn't typical for young adults in their 20s.

There were shelters and kitchens at which to volunteer, but Kennedy felt inspired to do something more — to truly live among those she was serving.

Kennedy and her friends live at Day House, a hospitality house in Detroit's Corktown, part of the worldwide Catholic Worker movement. Founded in 1933 by Dorothy Day and Peter Maurin, the mission of the Catholic Worker is to serve in accordance with the justice and charity of Jesus. Today, more than 200 Catholic Worker communities exist across the world.

“The Catholic Worker at its core is about doing the works of mercy: feeding and giving drink to the hungry, sheltering the homeless, visiting the sick and imprisoned, burying the dead, and giving to the poor,” Kennedy, 26, told Detroit Catholic.

Day House offers laundry, phone and internet service as well as breakfast and lunch during drop-in hours. Kennedy and her fellow workers also help to connect those who need additional resources in the area, and generally seek to be a welcoming presence for those in need. 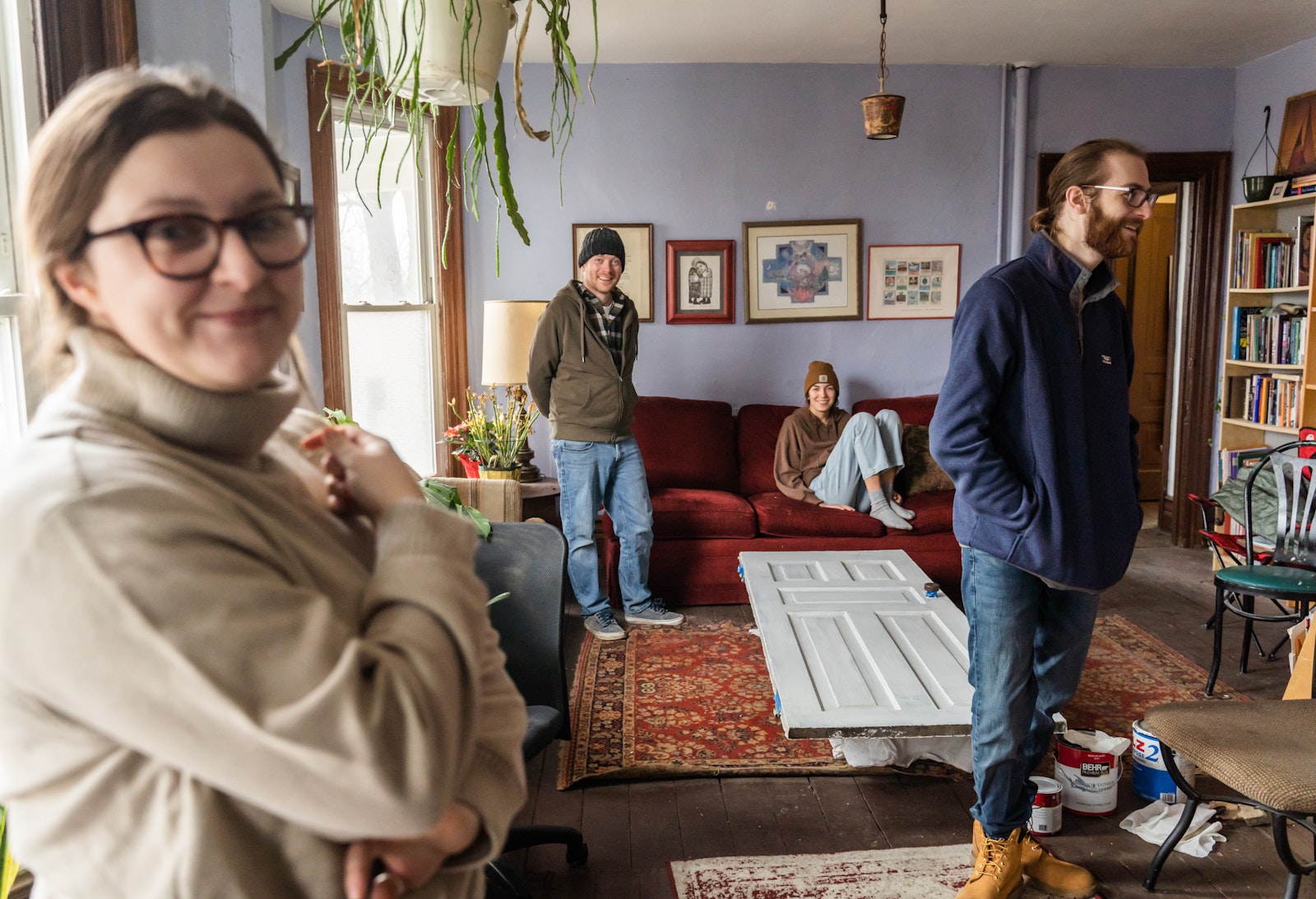 Since Fr. Tom Lumpkin, who founded the Day House in the 1970s, stepped away from the day-to-day operations in 2019, a group of young adults has stepped up to fill the void, serving members of the community in need through basic service, a listening ear and a welcoming presence.

Kennedy first heard about Day House — named for Dorothy Day — through a friend in July 2021. “I knew then that I wanted to do what these folks are doing … something really moved inside me,” she said.

Fr. Thomas Lumpkin helped to begin the Manna Meal Soup Kitchen in 1976, planting the seeds for the beginning of the Catholic Worker movement in Detroit. He lived in the house on Trumbull in Detroit’s Corktown until 2019, when he passed the day-to-day operations to two young women.

“When Fr. Tom retired a few years back, some friends stepped up to steward the house,” Kennedy said. “Since then, other folks have gotten in touch, and the five of us now have the great honor of stewarding it, too.”

Lauren Calka, who has lived at Day House for the past seven months, said Fr. Lumpkin continues to be involved. “Although it has been three years since he moved out of the Day House, we see him daily at the soup kitchen, as well as for our Sunday liturgy,” said Calka, a member of Most Holy Trinity Parish in Detroit's Corktown neighborhood.

Calka’s Catholic faith was an enormous factor in her decision to become involved.

“I came to be a Catholic Worker due to my strong feelings around my own Catholicism, communal living, and poverty,” she said. “I wanted to be held accountable to a level of charity that came more from a place of, ‘This is who I am,’ versus, ‘This is what I do.’”

“I believe this is true for all of us that take up residence at Day House," Calka said. "Jesus is the one who not only inspires but tells us that this is the work we ought to be doing. To surround yourself with the poor, and to be poor yourself, is utterly counter-cultural. The only way I am able to keep it up is by the conviction of faith.” 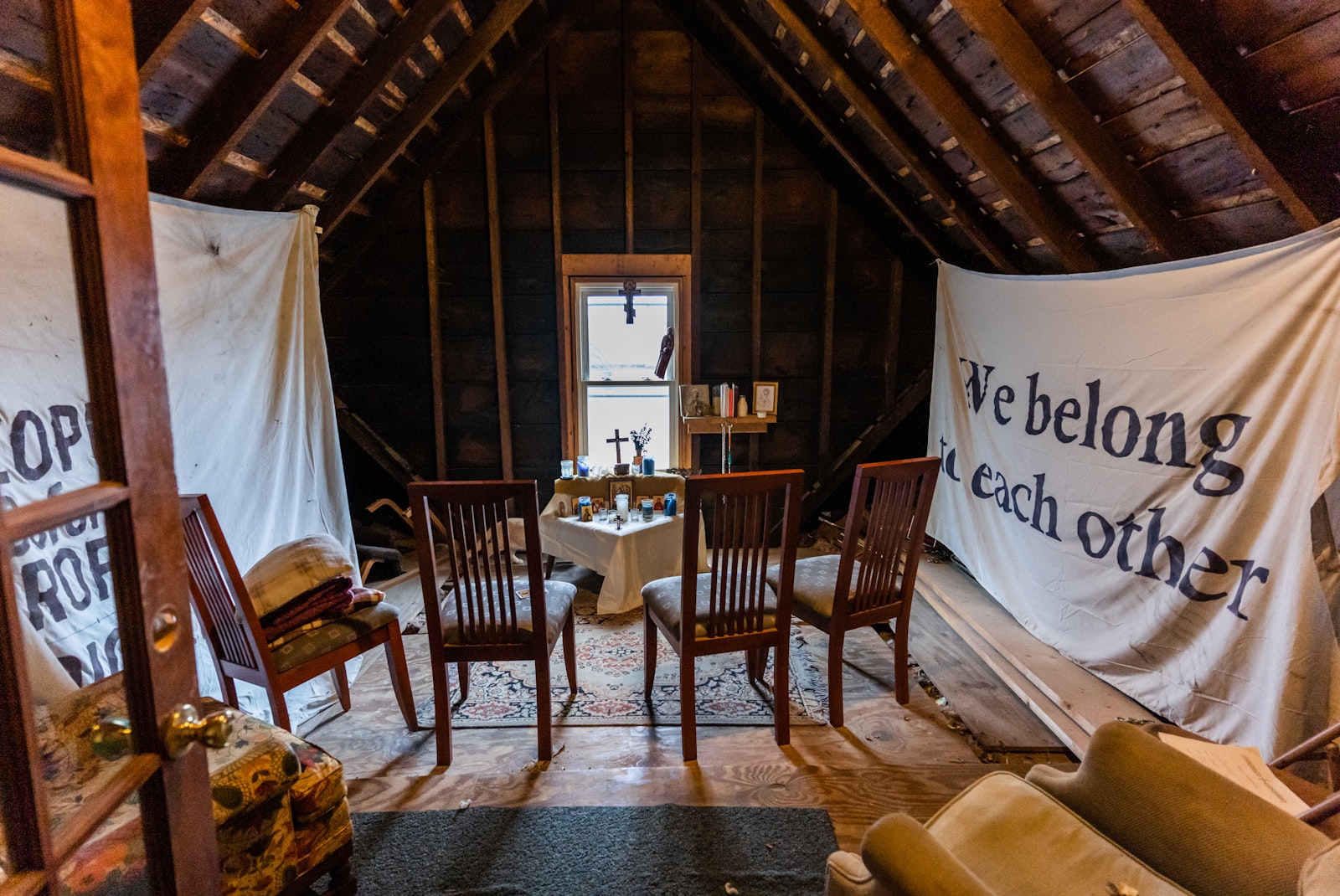 Signs hang throughout the home, which is open to guests, tell visitors about the community's mission.

Like many young adults, Kennedy said she pursued political and social answers to the problems she saw plaguing society, but "it always fell flat," she said. “I wanted to take seriously the call to give up my personal comfort and live in community among the poor and suffering but I really didn't know how, short of entering a religious order.”

In 2019, after reading Day’s autobiography, “The Long Loneliness,” “My heart went ablaze,” Kennedy said. “I felt like so much of what I'd noticed about the world, religion, politics, the poor, and our responsibilities as Catholics was laid out. It was like a road map for me, and it ultimately led me to Day House.”

Kennedy said living and working in the Catholic Worker community is not paid work, nor is it volunteer work in the conventional sense “where you may come a time or two and move on.” Some residents support themselves through part-time work, while others work outside Day House to provide for basic expenses such as phone and student loans.

“Our aim is to live as simply as we can given our situation,” Kennedy said. “Most of our needs are met by living in the house; that is, the costs of running the home are provided for by the generosity of the community, and we in turn commit to living within its walls and stewarding this work for the folks who need it. We receive hospitality from this home (and each other) as much as anyone we serve.”

Living in a community that practices radical hospitality means being confronted with one's own shortcomings, said another roommate, who chose not to give her full name for personal reasons. “It is not a career or a charity; it's an attempt at the way of living outlined and exemplified for us by Christ," said the roommate, who goes by "Coffey." "I don't think I’ll ever get it right, but I have the rest of my life to keep trying and a community that is teaching me and holding me to that.”

“But then there’s the Eucharist — he breaks every barrier, even reason, even my fallen nature, to be with me,” she said. “And then he asks me to ‘do this in memory’ of him, to try to convert myself the way that he does to be consumed by the Body of Christ. What can you do after that but try again?"

Big things are in the works for Day House as it undergoes several home improvement projects including a kitchen renovation and accessibility for their disabled guests.

Recently, one guest stood out for Kennedy, whom she met last summer. Living in a tent on the property, he was struggling with auditory hallucinations and was unwell, she recalled.

“How to help this guest was weighing on all of us as he struggled night after night,” Kennedy said. “One night I was talking with him and he said, ‘I just wish there were some other sounds to focus on other than the voices.’”

Immediately, Kennedy went inside and ordered him a portable radio. “His condition at night improved almost immediately upon receiving the radio,” she said. “Over the next couple of weeks, the community was able to find various items he needed, including a brand new pair of boots, and one day he broke down crying and gave me a big hug.”

The guest has since moved on, “but it really illustrated to me how much of this work is just about loving people well and building relationships. In many situations, it's really about the basics: Are folks warm? Do they have a listening ear? Something to eat? It doesn't solve all of their struggles, but seeing the peace of mind brought about by a simple radio really affected me," Kennedy said. "I think about it often.”

More than anything, Kennedy and her roommates hope for awareness of the Catholic Worker’s mission. “We want people to know that there is a place for them to come be involved!” she said. “More than donations, we just want people here around the table, taking up this work with us.” 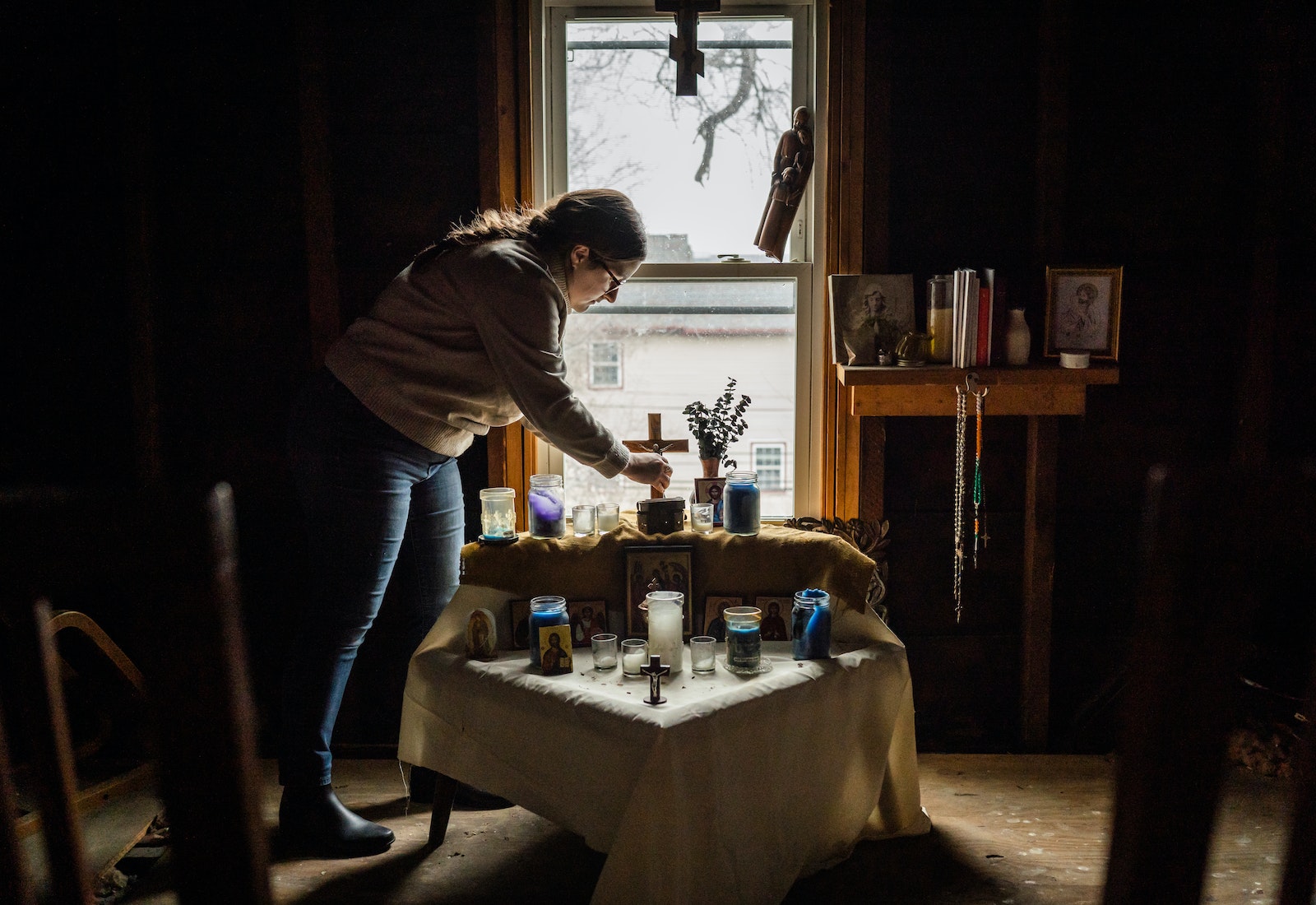 Faith and a commitment to serving others in Jesus' name is a core tenant of the Day House community, said Kennedy.

Coffey and Kennedy, both of whom are members of St. Stephen Byzantine Church in Allen Park, stressed that involvement is welcome at any level.

Calka agreed, and added, “I believe a conversion is required before someone would take interest in this community and movement; and beyond that, continual conversions to keep sticking around."

“As the days go on, I see within myself not a stronger aptitude for the work, but an unveiling of the places in my heart where I am being asked to give more, to love more, and to grow in deeper communion with my neighbors, as well as Christ, himself,” she said.

“The work is impossible to do alone, and we desire that community be the solution, in accordance with the grace of God,” Calka stressed. “If people would like to partake in that, they should stop by." 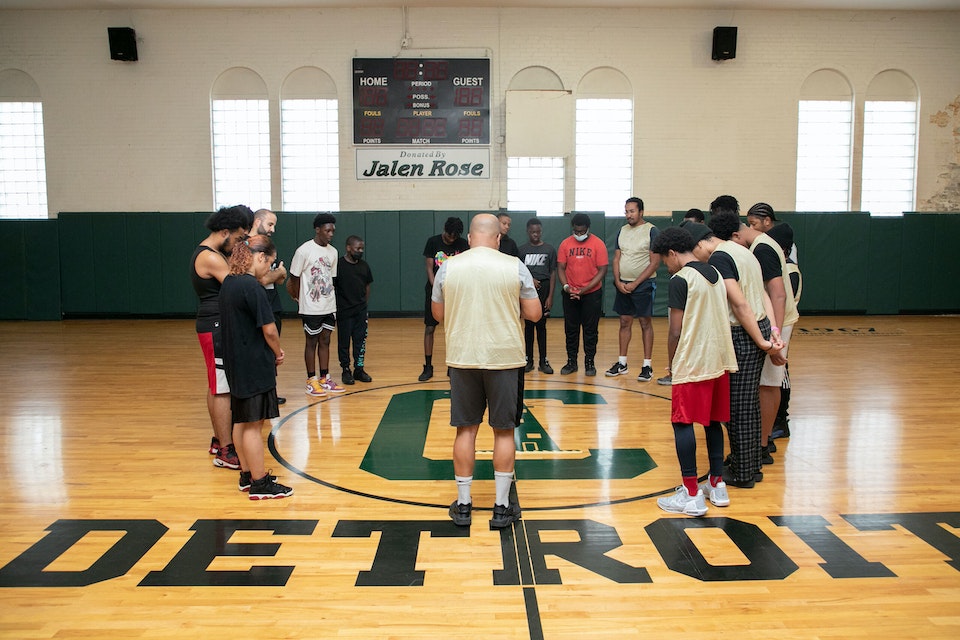 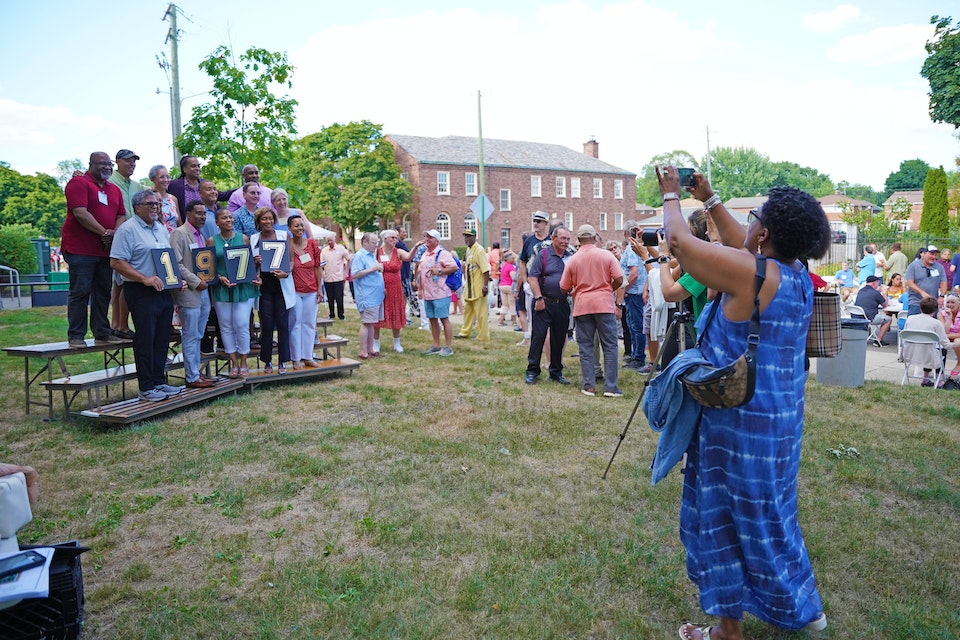