Invasion of Ukraine was barbaric, but war is complicated, pope tells Jesuits 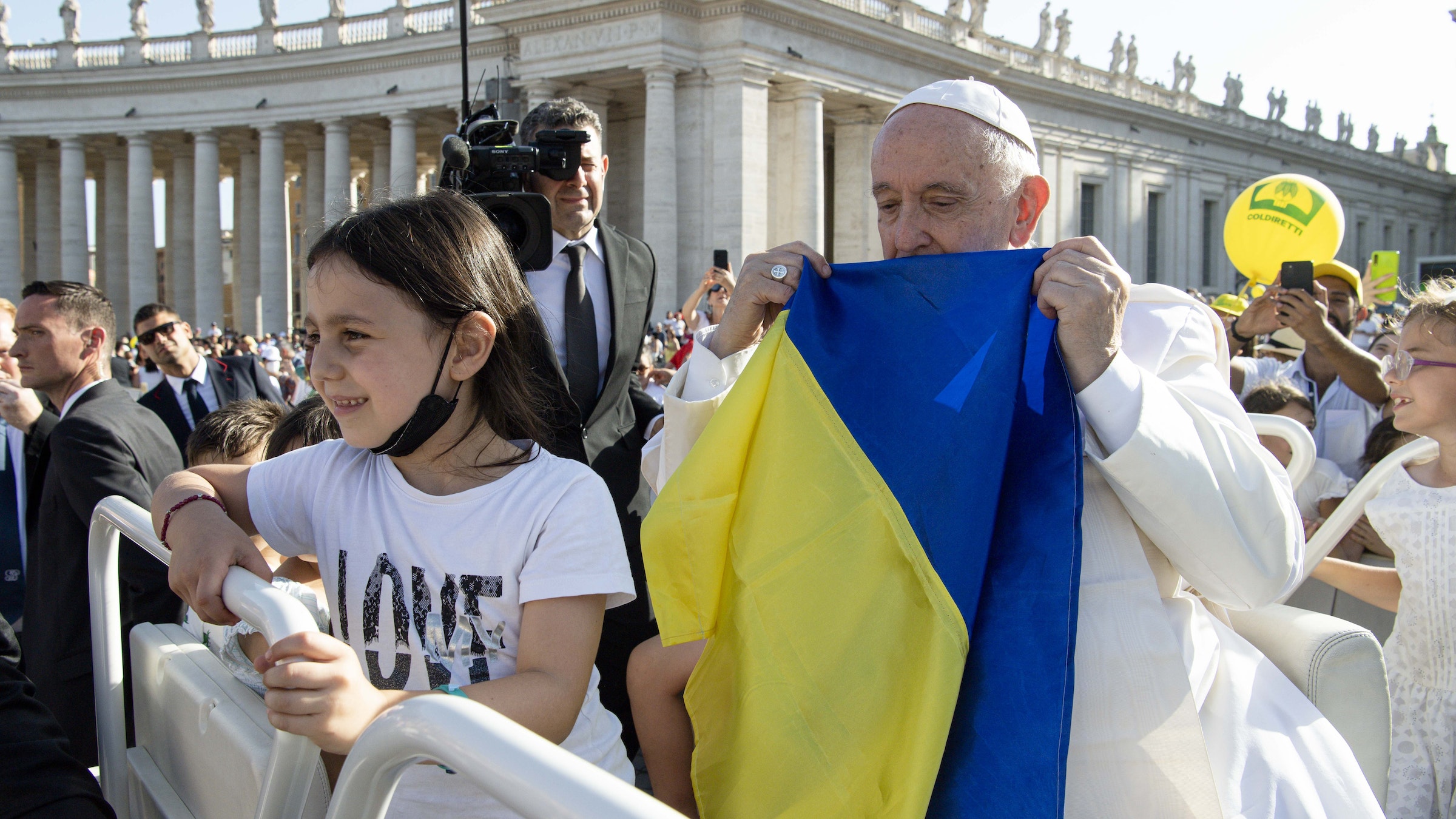 Pope Francis holds a Ukrainian flag as he greets the crowd before Mass in St. Peter's Square during the World Meeting of Families at the Vatican in this June 25, 2022, file photo. Meeting Jesuits in Kazakhstan in early September, the pope said too many people have taken a simplistic view of Russia's war on Ukraine. (CNS photo/Vatican Media)

ROME (CNS) -- Pope Francis said that while he has defined Russia's invasion of Ukraine as "unacceptable, repugnant, senseless aggression, barbaric (and) sacrilegious," he also said that too many people have taken a simplistic view of the war.

"There is a war underway, and I think it's wrong to think of it like a cowboy movie where there are good guys and bad guys. And it's wrong to think that this is a war between Russia and Ukraine and that's it. No. This is a world war," Pope Francis told a group of Jesuits, according to an Italian transcript of the conversation released Sept. 28.

The pope met Sept. 15 with 19 Jesuits working in Russia, Belarus and Kyrgyzstan -- the Jesuits' "Russian Region" -- during his Sept. 13-15 trip to Kazakhstan. As has become the practice when the pope meets Jesuits during a foreign trip, a transcript of his remarks was released later by the Jesuit journal La Civiltà Cattolica.

Pope Francis told his Jesuit confreres that while it is clear "the victim of this conflict is Ukraine," one must try to understand the factors that contributed to the war.

"War is like a marriage, in a sense," the pope said. "To understand, you have to investigate the dynamics that developed the conflict."

As he has said in the past -- and has been criticized for saying -- Pope Francis told the Jesuits that "there are international factors that helped provoke the war," repeating that an unnamed head of state had told him in December that he was worried because "NATO had gone barking at the doors of Russia without understanding that the Russians are imperial and fear insecurity on their borders."

"When they feel threatened and in decay, imperialists react by thinking that the solution is to wage a war to remake themselves -- and also to sell and test weapons," Pope Francis said, according to the transcript.

The pope outlined for the Jesuits the public prayers and statements he had made appealing for peace, condemning the invasion and praying for Ukraine, as well as his conversations with the Russian and Ukrainian ambassadors to the Holy See and with Catholic and Orthodox prelates.

However, he added, "I am not interested in you defending the pope, but that the people feel caressed by you who are the brothers of the pope. The pope does not get angry if he is misunderstood, because I know well the suffering that is behind it."