King vs. pope: Why there’s never been a John II of England (Part II) 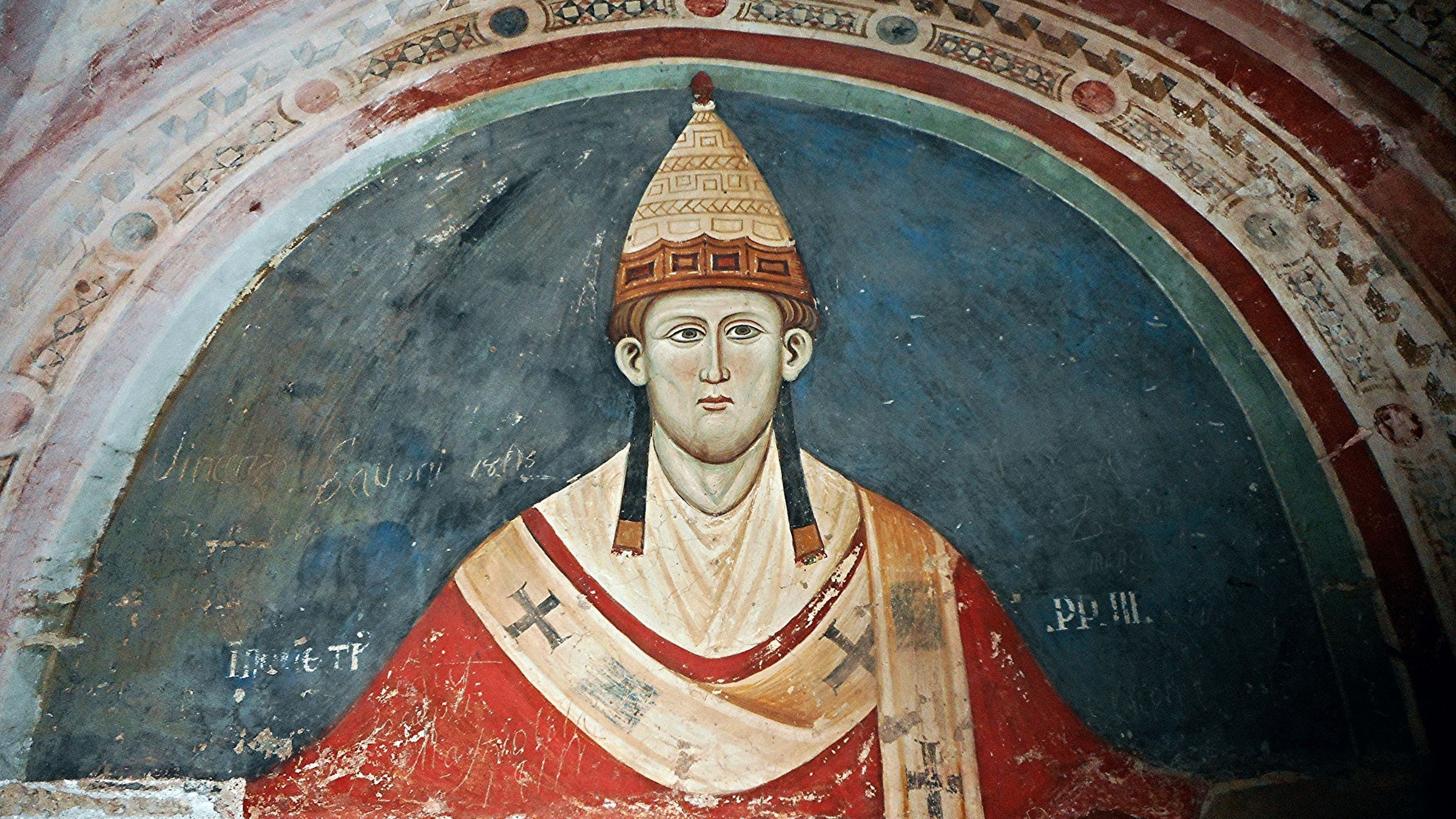 Pope Innocent III is depicted in a mid-13th century fresco at the Monastery of Sacro Speco of Saint Benedict, Subiaco, in Rome. (Wikimedia Commons)

The previous installment described how John Lackland became king of England and wanted to nominate Bishop John de Grey as archbishop of Canterbury, England’s primatial see. Thus began a classic example of the state encroaching on what Pope Innocent called “the liberty of the Church.”

Pope Innocent III (1198-1216) is regarded by many scholars as holy but also politically shrewd, the most powerful of medieval pontiffs. The same scholars most often list King John (1199-1216) as the least effective of England’s monarchs.

Although Pope Innocent III agreed that the Benedictine monks of Canterbury’s cathedral chapter were, by right, the electors of the archbishop, the fact that their voting occurred clandestinely invalidated the election of Reginald, the local subprior of Christ Church. That done, Innocent also refused to regard as canonical the nomination of King John’s man, John de Grey, already bishop of Norwich, since the king acted before the pope ruled on Reginald’s election.

Innocent knew something of England and the see of Canterbury, having gone on pilgrimage as Cardinal di Segni to St. Thomas Becket’s shrine there. The Church in England needed a strong, courageous man to defend ecclesiastical rights and withstand a king so devoted to force majeure. Innocent, too, had a candidate in mind to become primate of England.

Innocent’s choice was a great scholar, Master Stephen Langton, an Englishman born in Lincolnshire and devoted to the Church. Langton was also rector of the University of Paris and a professor of theology and jurisprudence, whose lectures Innocent had attended as a student.

Innocent III called Stephen to Rome. In December 1206, the pope consecrated him bishop and bestowed on him the red hat, marking his rank as a cardinal-priest. The monks of Canterbury acquiesced to Innocent’s choice for archbishop. John the king did not.

Warring with King Philip II Augustus of France, to whom he would eventually lose Normandy and Anjou, John levied unfair and excessive fines, taxes and land seizures on nobility, clergy, guildsmen and peasants to fund his personal, foreign war. Realizing how unpopular he was among his English subjects, John became all the more intent on not losing his struggle with the pope.

Innocent was patient with John’s insistence that he exercise the same royal prerogative his father and brother had enjoyed. John eventually offered 3,000 marks for de Grey’s appointment. Innocent refused, considering it simony, the sin of buying and selling spiritual powers.

John’s next gambit was to scare the pope. Anyone giving shelter to Cardinal Langton, King John threatened, would be outlawed. That is, if the archbishop survived the king’s agents should he dare sail to England.

John then took vengeance on the monks of Canterbury for acceding to the pope’s choice, driving them from their monastery before taking possession of their property. Unimpressed, Innocent acted decisively, placing England under interdict, taking effect on March 24, 1208.

An interdict is an ecclesiastical penalty which ends sacramental life for a designated area, usually a penalty for stubborn opposition to a legitimate decree. A bishop can lay an interdict on a parish, or on his entire diocese. The archbishop-primate of a country may lay it on several dioceses or on the entire nation. The pope, of course, can do the same, anywhere on the globe.

In his bull of interdiction, Pope Innocent instructed bishops and priests to proclaim the Gospel on Sundays from the porches in front of the locked doors of their closed churches instead of celebrating Mass. Infants were to be baptized, but confession or extreme unction could be administered only in danger of death.

John seldom took the sacrament and was known to make mock of Church doctrine in private, so the decree meant little to him. But the decree did not sit well with John’s subjects. Highborn and low, there was little love lost between them and John Lackland.

Cardinal Pandulf Verraccio came to England as papal legate to parley further with the king. In November 1209, in light of John’s continued obstinacy, promising to execute Langton should he step onto Dover shore, Cardinal Verraccio produced Innocent III’s decree of excommunication and left England (Langton had already arrived but was in hiding).

John forced priests to celebrate Mass in whatever cities he held court. Bishops and priests who refused to defy the pope were beaten, then banished. Others, deprived of their homes and churches, fled England. John seized their lands while promising protection for clergy remaining loyal to him.

The pope made a last attempt to bring the English king to heel: in 1212, Innocent formally declared John deposed, releasing his subjects from any and all allegiance to him. Innocent authorized John’s nemesis, King Philip Augustus of France, to remove John by force of arms, if necessary. Philip was delighted, having already taken over French possessions once so ably defended by Richard the Lionheart. Entrusted by Pope Innocent with executing the sentence of deposition, Philip made ready to add England to his realm.

John was in a pickle. His men at arms and standing army were all mercenaries, loyal only so long as John paid them. Barons and feudal lords, resenting John’s highhanded treatment, his lack of skill in battle, and levying high taxes, began plotting against him. The farmers and guild members, denied the solace of the sacraments, had ceased thinking of John with reverence as their sovereign long before.

His back to the wall, only now did John show any talent for statecraft.

Cardinal Pandulf Verraccio, the papal legate, returned to England at John’s invitation, receiving the king’s promise to accept Stephen Langton as archbishop of Canterbury; to allow exiled bishops and priests to return to England; and to make compensation in the negotiated amount of 100,000 marks for the losses sustained by the clergy.

Now came John’s masterstroke. On his own initiative, the king removed his crown, handing it to the cardinal legate to be given Pope Innocent. By this act, John surrendered the kingdom of England into the hands of Pope Innocent. The pope then returned the crown.

There was nothing spiritual about this ritual. John sent his crown to the pope, not as head of the Universal Church, but as sovereign of the Patrimony of St. Peter, the Papal States. Its immediate effect was to prevent Philip Augustus from invading England, since he would now be attacking, not King John, but Pope Innocent and thus liable to excommunication.

On July 20, 1213, King John was solemnly freed from excommunication by Archbishop Langton. After John reimbursed the clergy for its losses, the interdict was lifted from England on June 29, 1214.

The upshot of John’s obstinacy was that England was no longer an independent kingdom; it was now a fief and the pope was England’s overlord. “The document of the surrender states that henceforth the kings of England were to rule as vassals of the pope and to pay an annual tribute of 1,000 marks to the See of Rome.”

The tribute, by the way, levied at one penny per household in England, was soon called “Peter’s Pence.” It is now the name of the worldwide annual campaign taken up to support the Holy See.

Surrendering the freedom of Merry England to a foreign power is the act which has so thoroughly damned King John in the eyes of later British monarchs. It is what keeps any successor from taking his name as John II.

The previous article began by recalling a story about how Princess Diana wanted to name her son John and the queen saying no. The way I heard the story, Diana thought a bit, then suggested her son be named Oliver instead. Since Oliver Cromwell had King Charles I beheaded in 1649 attempting to end England’s monarchy, I tend to believe this part of the story is apocryphal.

Sean M. Wright, an Emmy-nominated television writer, is a Master Catechist for the Archdiocese of Los Angeles. He is also part of the RCIA team at Our Lady of Perpetual Help parish in Santa Clarita, CA. He responds to comments sent him at [email protected]