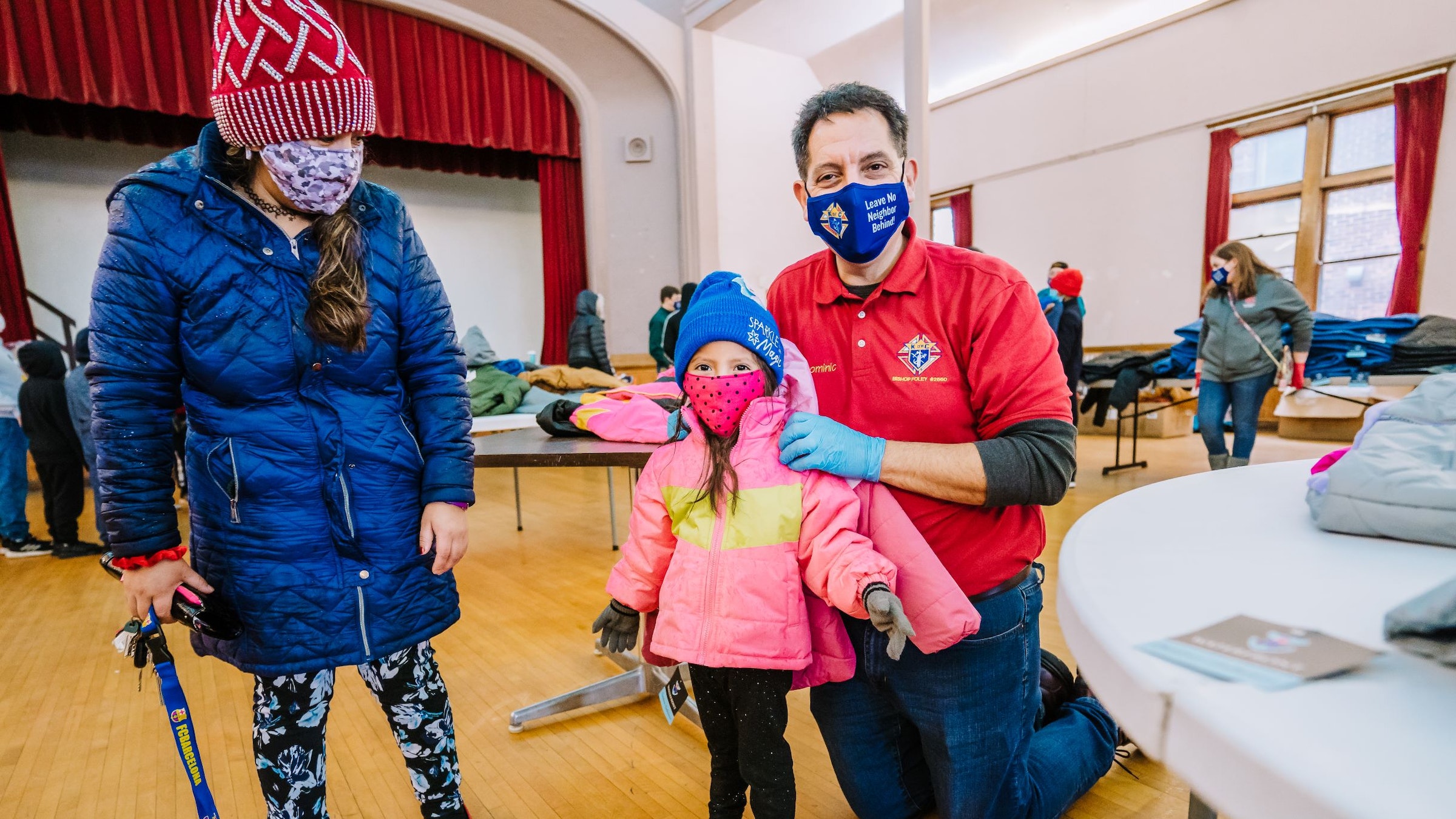 A volunteer with the Michigan Knights of Columbus helps a young girl find a new winter coat Dec. 12 at the Basilica of Ste. Anne in southwest Detroit during the Knights’ annual “Coats for Kids” giveaway. Hundreds of families lined up to pick out a new coat for their child. (Photos by Valaurian Waller | Detroit Catholic)

DETROIT — In a bleak mid-winter, hundreds of kids in Detroit will have a new way to stay warm, thanks to the Knights of Columbus.

More than 2,448 coats were ordered through the Michigan State Council, and even more were ordered by individual councils across Michigan’s seven dioceses, said Paul Palka, state program director for the Michigan Knights.

“The state council has received requests from parishes and charities in our different dioceses for poor neighborhoods that have asked for help in the past, asking us to help clothe children in the winter,” Palka told Detroit Catholic. “When we were given the opportunity through the Supreme Council to purchase these coats at a discounted rate, we reached out to our community and discovered who needed help the most.”

Nationwide, the Knights have been conducting the annual drive since 2009. Working with a distributor, the Knights and volunteers set up sites in low-income areas, where families can pick out a brand-new coat for a child, choosing from various sizes and colors.

“Last year, we held distribution at Most Holy Redeemer Parish in Detroit, and within two hours we gave away all 576 coats,” Palka said. “The people in the area are aware of what’s going on through our contacts in the community, and we have a well-organized distribution system in place.”

Normally, parents pick up the coats with their children, but in cases where a child isn’t present, the Knights require a birth certificate or other evidence of a child in need, ranging from age 5 to teenagers.

Around 24 Knights, some bilingual, who serve the Hispanic-American community of Ste. Anne worked the distribution site, setting up tables and sizing kids up for a coat. Because of COVID-19, the Knights avoided having families handle multiple coats, instead asking families to pick a coat and size with a volunteer picking the particular selection.

Other than the extra precaution, the Knights don’t have too many requirements, Palka said: “If a kid wants a coat, they get one.”

“It is such a wonderful feeling when they come in,” Palka said. “When the kids try on their coat, they are so happy. If they have a coat already, it’s tapered and well-worn or a hand-me-down. The kids are just beaming, and the parents are so happy. It’s really beautiful to see parents relieved, knowing their kid will have a great coat.”