Lack of respect for life, for nature have same root, pope says 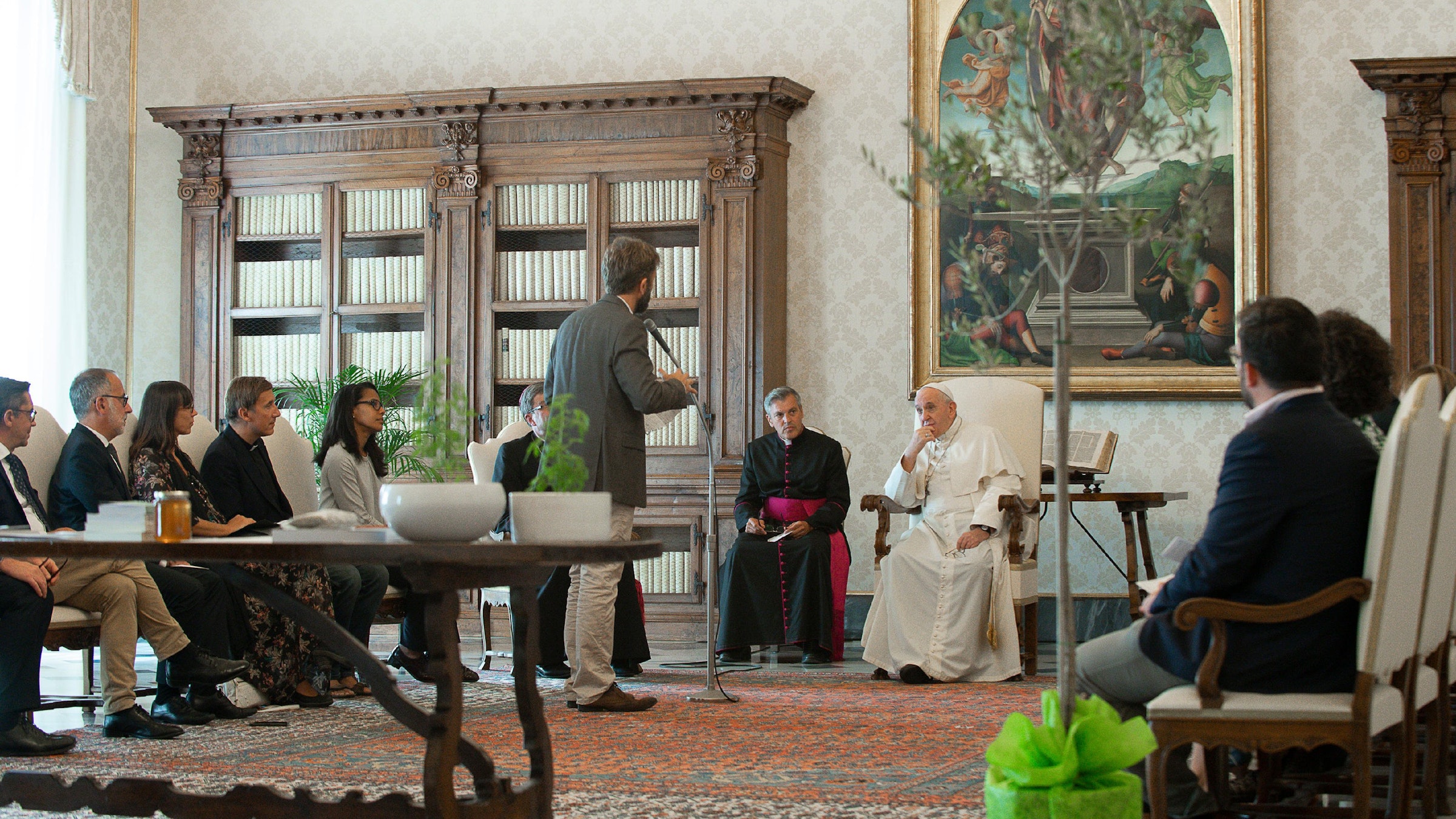 Pope Francis meets with a group of clergy and laypeople advising the French bishops' conference on ecological policies and on promoting the teaching in his encyclical, "Laudato Si', On Care for Our Common Home" Sept. 3, 2020. The actress Juliette Binoche was part of the meeting in the library of the Apostolic Palace at the Vatican. (CNS photo/Vatican Media)

"They are the same indifference, the same selfishness, the same greed, the same pride, the same claim to be the master and despot of the world that lead human beings, on the one hand, to destroy species and plunder natural resources and, on the other, to exploit poverty, to abuse the work of women and children, to overturn the laws of the nuclear family (and) to no longer respect the right to human life from conception to its natural end," the pope said Sept. 3.

Pope Francis made his remarks in a speech written for a group of laypeople advising the French bishops' conference on ways to promote and implement the teaching of "Laudato Si', on Care for Our Common Home.”

The group, which included the actress Juliette Binoche, traveled to Rome by train as a carbon-saving alternative to traveling by plane.

The Vatican press office said the pope handed his prepared text to members of the group and then had an unscripted conversation with them, telling them that his own "ecological conversion" began in 2007 by listening to Brazilian bishops at the Latin American bishops' meeting in Aparecida, Brazil.

At the time, "I understood nothing," he said. But he began listening and studying and dialoguing with scientists and theologians. The result was "Laudato Si'," the encyclical published in 2015.

Ecological concern is a Christian concern, he said.

"The Bible teaches us that the world was not born in of chaos or by accident but by a decision of God who called it -- and always will call it -- into existence out of love," the pope said. "The universe is beautiful and good, and contemplating it allows us to glimpse the infinite beauty and goodness of its author.”

Christians have a moral obligation to respect the creation God has entrusted to them "as a garden to cultivate, protect, make grow according to its potential," he said. "And if human beings have the right to make use of nature for their own needs, they cannot in any way claim to be its owners or despots, but only administrators who must give an account of their use.”

Jesus taught his followers to live in harmony, with justice, in peace and recognizing others as brothers and sisters, the pope said. But "when one considers nature only as an object of profit and self-interest -- a vision that consolidates the whim of the strongest -- then harmony is shattered and serious inequality, injustice and suffering result."