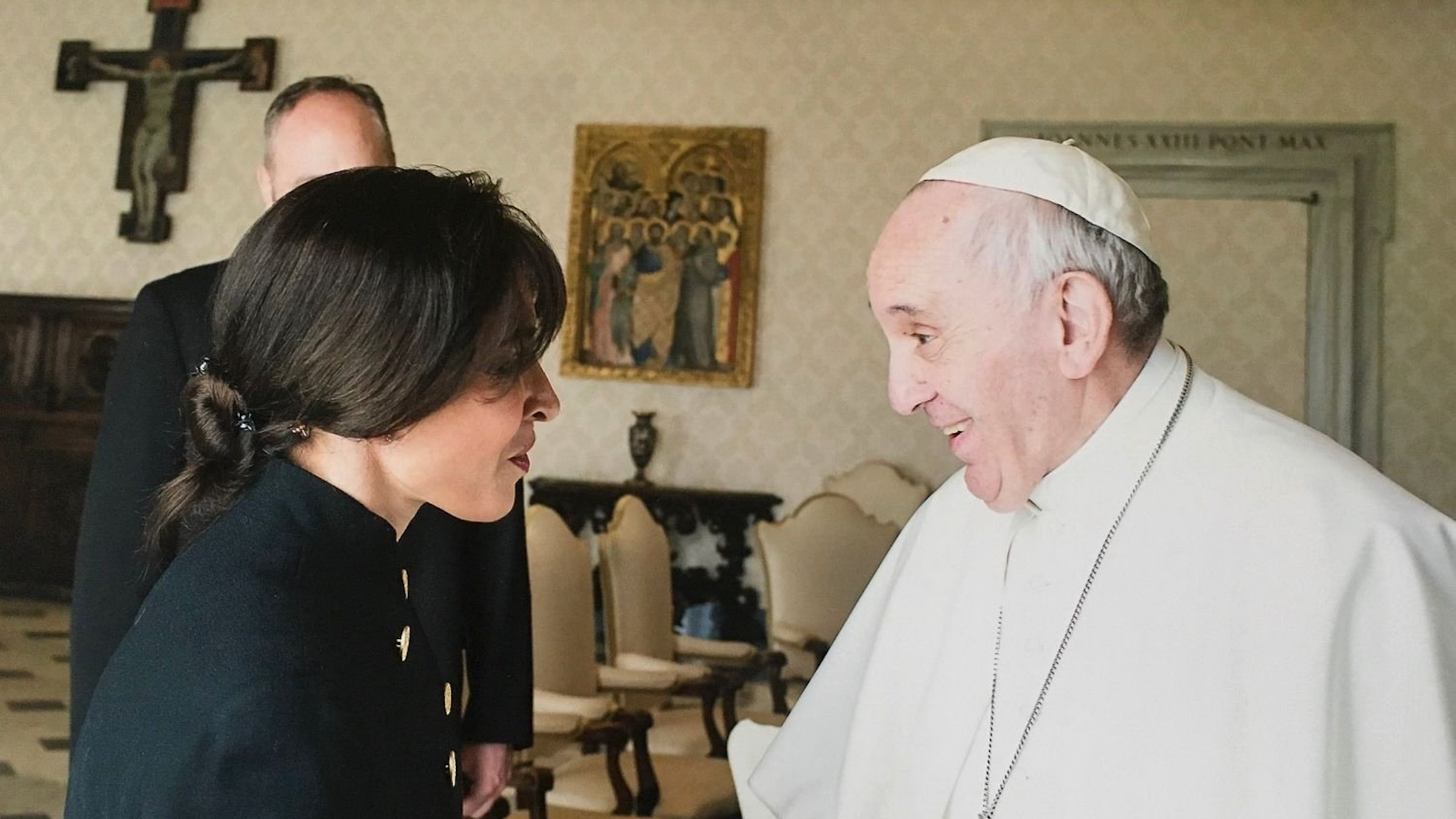 Pope Francis appointed Argentine theologian Emilce Cuda as the new head of office of the Pontifical Commission for Latin America, a position she assumes Sept. 1, 2021. Cuda is pictured with the pope at the Vatican March 17, 2017. (CNS photo/Vatican Media)

VATICAN CITY (CNS) –– Pope Francis appointed Argentine theologian Emilce Cuda as the new head of office of the Pontifical Commission for Latin America, a position she assumes Sept. 1. A laywoman and mother of two, Cuda will work with the new secretary, Rodrigo Guerra López, a Mexican philosophy professor and also a layman.

Cuda's nomination was seen in the South American country as a sign of Pope Francis' ongoing struggle against clericalism and as an important step to increase women's presence in the church hierarchy.

"I think her appointment is historic. Normally, very important positions like that are filled by members of the clergy," said Carlos Custer, a former Argentine ambassador to the Vatican.

Custer, a labor leader and political activist, stressed that Cuda is not only "an important intellectual, but also a person who has intimate relations with the labor movement in Argentina and Latin America.”

"The Argentine labor movement has been strongly influenced by the church's social doctrine. There is a deep Christian humanism in the ideas of the working people. Emilce Cuda is a scholar, but she is also a person who follows the social and labor movements," he told CNS.

Custer first met Cuda years ago during an annual meeting of the bishops' social ministry; she was one of the speakers. Many trade unions and popular movements invite her to share her political and theological visions, he said.

One of them is the Latin American movement of base ecclesial communities, known in Portuguese and Spanish by the acronym CEBs. Francisco Bosch, an Argentine theologian and base communities activist, attended their regional conference in Ecuador in March 2020, only a few days before the outbreak of COVID-19.

"Emilce Cuda told the attendants, who had come from several Latin American countries, that one of our fundamental tasks was to re-enchant the world through the encounter of faith and politics from our Latin American perspective. That was very meaningful then and continues to be now," he told CNS.

Bosch defines Cuda as a "bridge-builder," a woman with a gift to promote dialogue, and an organizer who is always concerned with the "structuring of a collectivist spirit.”

Her ideas have emerged in the Argentine Catholicism's particular context, greatly influenced not only by the labor movement but also by the so-called theology of the people, a theological current related to liberation theology and centered on the people as a historical-cultural subject.

"Emilce Cuda was very close to (Jesuit Father and theologian Juan Carlos) Scannone, one of the theology of the people's main thinkers. But she developed her own kind of political theology," explained Maria Clara Bingemer, a theology professor at the Pontifical Catholic University of Rio de Janeiro.

Bingemer, who has met Cuda at several academic congresses over the years and became her friend, said one of her challenges will be to increase the "dialogue between the Global North and the Global South." Bingemer said Cuda is probably in a particularly favorable position to do so: Married to an American, she spends part of the year at their Arizona house.

"I think it is very important that a married woman, a mother has been appointed. Latin America still has a misogynistic and clericalist mentality," Bingemer added.

Guerra, the new secretary, stressed that his and Cuda's nominations are part of "Pope Francis' process of transformation of the church's structures.”

"We usually blame the clergy for clericalism, but it is really a disease that affects everybody, including laypeople," he told CNS.

By appointing laymen and women to occupy high positions, the pope is showing people that a deep transformation must take place among Catholics, both the clergy and the churchgoers, he said.

It is not a coincidence that a layperson and not a member of the clergy has written one of the most comprehensive works on Pope Francis' thinking. Cuda is the author of "Para Leer a Francisco: Teologia, etica y politica" ("Reading Francis -- Theology, Ethics, and Politics"), in which she discusses the central elements of his ideas and relates them with the Argentine and Latin American theological context.

"That is how I first met Emilce Cuda, by reading her book. The poor people appear in it as history's central character," Auxiliary Bishop Gustavo Carrara of Buenos Aires told CNS.

Bishop Carrara said Cuda's synthesis of Pope Francis' thought emphasizes the church's relations with the labor world, including the people who have been excluded from it by neoliberalism.

"That is what Blessed Enrique Angelelli (an Argentine bishop and member of the theology of the people movement) professed: One must keep one ear to the Gospel and one ear to the people," he added.

Over the past few years, Cuda has been an adviser to the Latin American bishops' council, which gave her the opportunity to learn more about the church's challenges in the entire region.

Now, she and Guerra will be the intermediaries between the Vatican and the Latin American church, Custer said.

"Pope Francis' work for Latin America will be mediated by them, and they will also take the needs of the church in the region to the pope," he said.