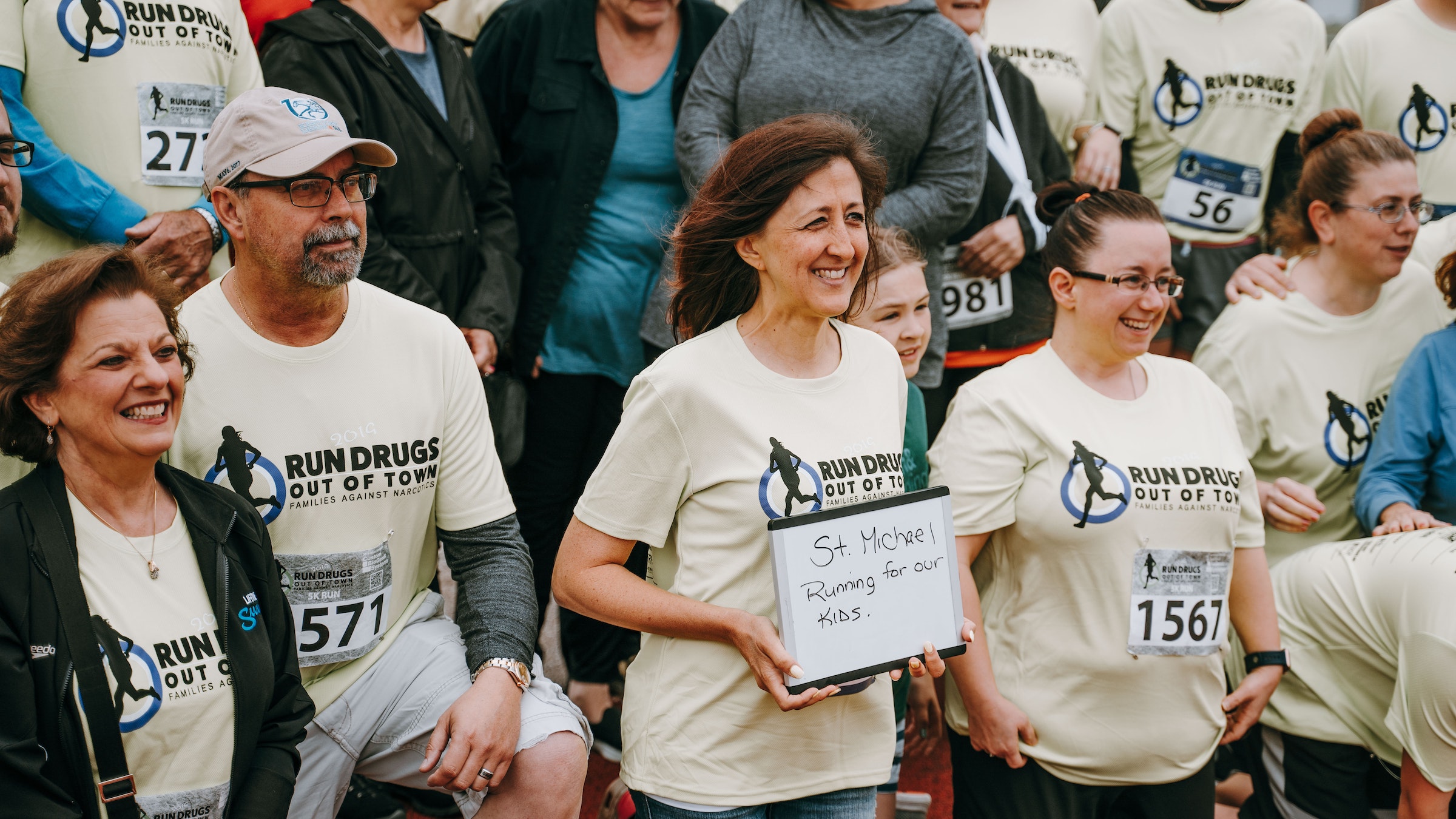 Members of St. Michael Parish in Sterling Heights pose for a group photo during the Run Drugs Out of Town Run/Walk, sponsored by Families Against Narcotics, at Fraser High School on June 15. Led by Fr. Michael Quaine, the parish has stepped its education and outreach to families suffering from addiction. (Photos by Valaurian Waller | Detroit Catholic)

STERLING HEIGHTS — It wasn’t until Fr. Michael Quaine noticed he was presiding at an increasing number of funerals for young people that he began to feel the impact of the opioid and drug crisis in suburban, and often affluent, communities.

“Everything looks very neat and orderly (in suburban communities), and we are well off, but there is a hold of addiction that we overlook,” Fr. Quaine said.

The priest said there often is a stigma of shame for families and friends who have loved ones who suffer from addictions. Often, family members don’t open up about the suffering they endure and are hesitant to talk to a priest about the situation because they are embarrassed.

“The role of the Church is to educate people about how to be compassionate,” Fr. Quaine said. “We have to start showing our support to those who want to start a change and need to turn their lives around. We have to stop judging people and be more supportive.”

As a priest, Fr. Quaine, 60, recognizes his role as a spiritual father to help families affected by the crisis process the difficult emotions and circumstances that come with it. Effective communication — and having resources available to guide families — is key to making people feel comfortable talking about the issue.

Last month, Fr. Quaine participated with members of his congregation in the Run Drugs Out of Town Run/Walk, a fundraiser sponsored by Families Against Narcotics, a community-based support program that educates and offers resources to families affected by addiction. The event, held at Fraser High School, drew 2,544 participants — including more than 70 St. Michael parishioners — and raised $155,000.

In April, St. Michael participated in the National Prescription Drug Take-Back Day, which helps families dispose of unused or unnecessary prescription medications. It was the parish's fourth year participating in the program, which is conducted in coordination with the U.S. Drug Enforcement Administration and local anti-drug coalitions.

“Oftentimes, people pass their prescriptions on to others without realizing it,” Fr Quaine said.

St. Michael was one of the first churches locally to host the event.

“We invite people to do some spring cleaning and get their opioids and expired medicines out of their medicine cabinet and out of the hands of those who shouldn’t have it,” said Michelle Hayes, director of Christian service at St. Michael.

“We see it as a work of justice going to the grassroots and supporting and educating the community,” Hayes continued. “It wasn’t until I got to St. Michael that I was exposed to the pastoral side in this epidemic.”

While the stigma attached to opioid addiction often is of a person experimenting with recreational drugs, that's often not how an addiction starts, Fr. Quaine said.

“It starts with young people who are given drugs validly by their physician, sports injuries or a dental visit,” he said, adding young brains can get addicted quickly, and some people are predisposed to addiction.

Retired District Court Judge Linda Davis, who stepped down from the bench in March to take over as executive director of Families Against Narcotics, which she cofounded in 2007, said she began working with Fr. Quaine more than five years ago when she began reaching out community leaders and clergy for support.

“Fr. Quaine was one who really seemed to take hold of the issue and become passionate about it,” said Davis, adding Fr. Quaine is constantly educating his congregation through St. Michael's weekly bulletin, including forming a team for the Run Drugs Out of Town event.

“He’s doing what every responsible clergy member should be doing,” Davis added.

For the past several years, the Detroit area has ranked as one of the highest communities for drug overdose deaths, Davis said.

Marlo Pizzo understands that pain all too well. More than a year ago, Pizzo's 25-year-old son, Ross, died of a heroin overdose, which began with his experimentation with marijuana before moving on to Xanax pills he found in a friend’s home. It eventually escalated to heroin use.

Just after Ross’s death, Pizzo was led to Fr. Quaine at St. Michael. His compassion for the Pizzo family and decision to preside at Ross’s funeral led the family to get involved and register as parishioners at St. Michael.

“I didn’t want his death to be in vain, and not to do anything from there,” Pizzo said, adding the family has started an annual golf outing in Ross’ name to benefit Families Against Narcotics, which now has 21 chapters in Michigan.

Pizzo, encouraged by the work and involvement of her new pastor, hopes the message of lifting the stigma of drug addiction will resonate. She said the witness and compassion she experienced has made her faith stronger.

“The message I want to send to people is not to be afraid, to be open and to not fear stepping in,” Pizzo said. “If we can just help one person, it's better than doing nothing.”

To learn more about the mission of Families Against Narcotics, or to find resources to help those struggling with addiction recovery, visit www.familiesagainstnarcotics.org.