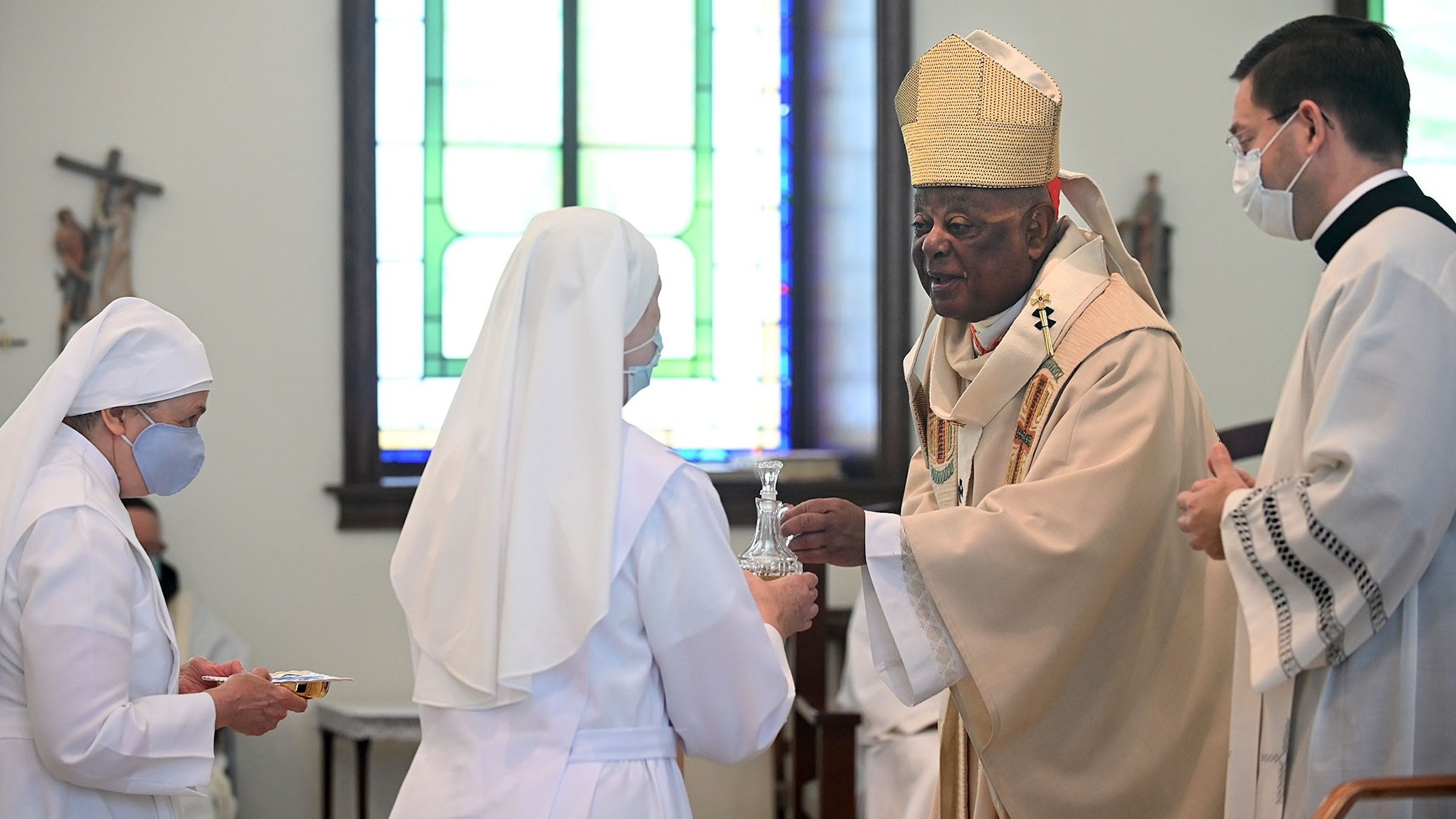 WASHINGTON (CNS) ─ Cardinal Wilton D. Gregory celebrated a Mass Aug. 14 to mark the 150th anniversary of the arrival in Washington of the Little Sisters of the Poor, an order whose service to the elderly poor in the nation's capital began just after the Civil War and continues in the digital age.

"Arriving here in the United States 150 years ago from France, most had to learn English and American customs and ways," Cardinal Gregory said in his homily during the Mass celebrated in the chapel of the Little Sisters' Jeanne Jugan Residence in Northeast Washington.

When they arrived in Washington, they "found hundreds if not thousands of neglected poor people," he said. "They went right to work and quite successfully to become sisters of these forgotten individuals. They continue to do so 150 years later."

The cardinal noted the religious order chose Little Sisters as its name.

"They are and choose to be servant relatives to the countless people in our community -- and other such communities throughout the globe -- who are needy, neglected, poor, elderly and often alone," he said, adding that as Little Sisters, they become "younger sisters and relatives of those that they care for with such dedication."

"They care for the elderly laity and clergy with a little sister's compassionate heart," he said, and "they have won the hearts of people" not only in the District of Columbia, Maryland and Virginia "but also throughout our nation and beyond."

Washington's archbishop praised the Little Sisters as examples of Jesus's teaching in that day's Gospel reading from Luke, that "those who listen to God's word and try to live by that word are dear to the heart of Christ."

The congregation at the Mass included Little Sisters wearing their white habits, and elderly residents who used wheelchairs or walkers to get to the chapel, and who sat and prayed in alternating pews.

Following COVID-19 safety guidelines for public gatherings in the District of Columbia, the sisters and residents wore face masks at the Mass.

According to the Little Sisters' website, the order traces its beginning to a winter night in 1839, when their French foundress, St. Jeanne Jugan, carried an elderly, blind and infirm woman home on a winter night, climbing the stairs to her small apartment and giving up her own bed to the woman who had no one to care for her.

Soon other women joined her work in caring for the elderly poor, and by 1850, the congregation had 100 sisters providing that ministry.

Just 29 years after their order began with that simple, loving act of charity, the Little Sisters established their first home for the elderly in the United States, in 1868 in Brooklyn, New York. Three years later in 1871, the Little Sisters arrived in Washington.

"I marvel at that courage and their trust in providence. They basically arrived with nothing," said Sister Constance Veit, a Little Sister of the Poor who does communications work for the order and lives at the Jeanne Jugan Residence.

The Little Sisters of the Poor -- who take a vow of hospitality, consecrating themselves to the service of the elderly poor -- themselves experienced hospitality upon arriving in Washington.

In an interview with the Catholic Standard, Washington's archdiocesan newspaper, before Mass, Sister Constance told how the first Little Sisters in Washington were invited by the pastor of St. Patrick's Church, Father Jacob Walter, to begin their home for the aged in his parish.

Members of the Society of St. Vincent de Paul and women from that parish furnished a house for the sisters to use near the church, and had a fire burning, the kitchen full of provisions and served the sisters their first meal.

"Washington stood out for how graciously we were welcomed," Sister Constance said.

In 1873, Father Walter blessed a new home built for the Little Sisters, and "by 1885, we could accommodate 150 residents," Sister Loraine Marie Clare Maguire, provincial of the Little Sisters' Baltimore Province.

"Stables were built and horses, a cow, some pigs and chickens along with a vegetable garden helped provide for the needs of our growing family," she said in a talk after Communion at the anniversary Mass.

Today "we surely don't have these same kinds of commodities today, but we certainly have very generous and loyal benefactors who have continued to support the mission of the Little Sisters in caring for the elderly into 2021," Sister Loraine said.

In 1982, the Little Sisters moved to their present facility near The Catholic University of America and named it for their foundress.

Currently, it serves 64 residents, including at its St. Joseph Villa, a wing of 22 low-income apartments for seniors who are still independent in meeting their daily needs. Twelve Little Sisters live and serve at the residence.

About 1,900 Little Sisters of the Poor serve in 31 countries around the world, including at 22 homes in the United States.

At the anniversary Mass, a pilgrim banner depicting St. Jeanne Jugan was displayed near the altar. A small statue and a relic of the saint were placed near the chapel's lectern.

In her interview before the Mass, Sister Constance noted the challenges the pandemic has presented for the Little Sisters and their elderly residents in Washington.

Strict safety protocols adopted at the Jeanne Jugan Residence included the initial period of lockdown, when the residents had to stay in their rooms, and for many months, they couldn't see their families directly.

Now family members can visit, after having their temperatures checked at the entrance and answering questions to ensure they are not exhibiting any COVID-19 symptoms.

"We did have deaths from COVID in the beginning," Sister Constance said, noting residents "do miss some friends who they've lost" from that disease and other causes. "The past year and one-half has been really tough on everyone."

The residents, some of whom lived through the Great Depression and World War II, offered an inspiring example amid the restrictions, she said.

"They're quite resilient. They didn't complain. They take things as they come ... and make the best of it," she said. "It's really edifying. ... They've been really good sports."

Sister Constance added, "What has always made our ministry so special is as Little Sisters of the Poor, we have always welcomed the elderly into our hearts and homes. ... They really become family to us."

Zimmermann is editor of the Catholic Standard, archdiocesan newspaper of Washington.