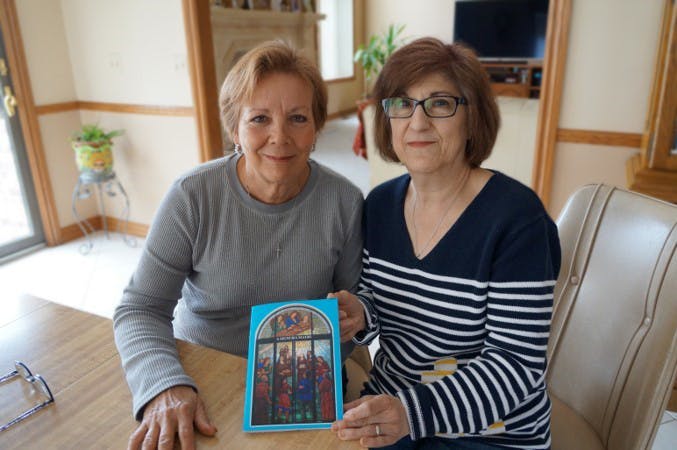 Josephine Maltese, left, and Phyllis Palazzolo, who frequently attend Holy Family Parish in Detroit, hold a book about Blessed Maria of Jesus Santocanale, a 19th century Italian nun whom Pope Francis will canonize on May 15. The women are among a small group of local Catholics devoted to Blessed Maria of Jesus. (Janet Sugameli Biondo | Special to Detroit Catholic))

Pope Francis will canonize Blessed Maria of Jesus Santocanale on May 15, but local families have known her sanctity for years

WASHINGTON TOWNSHIP — Maria Pia Palazzolo fully understands the power of the graces that flow from a soon to be canonized saint, Maria of Jesus, born as Carolina Concetta Angela Santocanale.

Blessed Maria of Jesus will be canonized by Pope Francis on Sunday, May 15, in Rome along with nine others. Blessed Santocanale, a nun who lived in the later 19th century, founded the Capuchin Sisters of the Immaculata of Lourdes in the town of Cinisi in Sicily, Italy.

Palazzolo, a resident of Washington Township, recalled when her brother, Giovanni Bartolotta, miraculously lived through a horrific motorcycle accident in 2003 near the northern Italian city of Ancona. After months of hospitalizations and confined to a hospital bed, Palazzolo's brother was the saved through the intercession of Maria of Jesus, who lived in Palazzolo’s and her brother’s home town of Cinisi, she said.

“They told us that the accident was very, very grave,” Palazzolo told Detroit Catholic. “They called us to tell us it was so severe that the ambulance was not equipped to handle his needs — so they needed a helicopter to bring him to the hospital.”

The next day, the newspaper headline about the crash was written as a “mortal accident” because they believed he did not survive, she added.

Bartolotta did survive, but his body was nearly cut in half as the result of the accident — yet none of his vital organs were touched.

Through tears, Palazzolo’s mother, Giuseppina Vitale, said in Italian that her son was saved after he saw a vision of Maria of Jesus as he was being wheeled into the hospital.

Maria-Pia Palazzolo, of Washington Township, is pictured with her brother, Giovanni Bartolotta. After a horrific motorcycle accident in 2003, Bartolotta saw a vision of Blessed Maria of Jesus, which he credits with saving his life. (Courtesy photo)

“In that moment that the doctors were trying to bring him to life, he saw Maria of Jesus on a black carpet on an altar with white flowers surrounding her,” Vitale said through a translator.

However, Bartolotta had forgotten this vision for months, she added.

“The very first day when he arrived home, a friend of his came to see him, and he said he had prayed to Maria di Gesu (of Jesus) for him,” his sister said. “At that point, my brother remembered what he saw in the emergency room.”

Now, Bartolotta's story is recorded in books about the graces attributed to the nun.

Carolina Santocanale was born in 1852 to a wealthy and noble family. Her father was a baron in Palermo, and her mother’s family owned much of the property in the town of Cinisi. Santocanale moved to Cinisi upon the death of her maternal grandfather, became a nun and then spent her life ministering to the poor, assisting them with food and starting a school for their education. Today, the town has the monastery, which was part of her ancestral home, and chapel dedicated to her and her life’s mission. She died in Palermo in 1923.

In 1973, Maria of Jesus Santocanale’s body was exhumed and found to be perfectly intact. She was declared venerable in 2000.

Just three years later, in 2003, one of her first documented miracles occurred.

According to many accounts, the nuns from her order decided to construct a new chapel next to the church of Santocanale to house Santocanale’s body. One of the young workers fell more than 30 feet from the skylight he was working on, but the only broken bone was in his wrist. This unexplained miracle became the catalyst for her beatification in 2016. 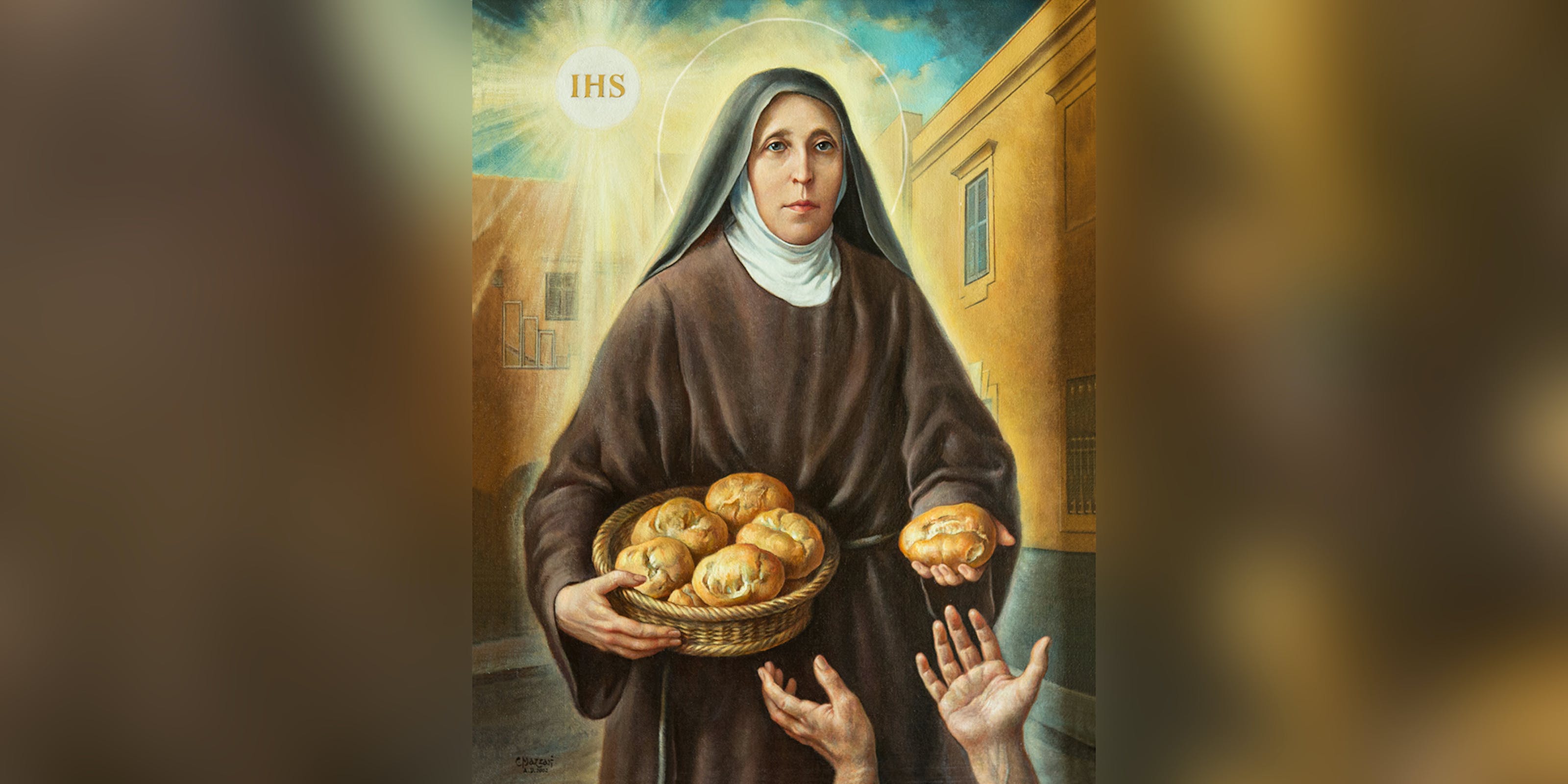 Blessed Carolina Santocanale, also know as Maria di Gesu, was born in 1852 to a wealthy and noble family and lived most of her life in the town of Cinisi, Italy. Pope Francis will canonize her along with nine others in Rome on May 15.

Currently, is it common for the sisters of her order to personally take visitors to the room where she slept and lay on her bed as part of the experience to connect visitors to the soon-to-be saint.

Former Macomb County resident Josephine Maltese said her family also received graces from the late nun. Maltese said her cousin, who was also barren, had children as a result of lying on Blessed Santocanale’s bed and praying a special novena for her intercession. A year later, she was with child, born on the same date she had lain on the bed.

“My cousin tried so many times (to become pregnant) but this came naturally,” Maltese said. They gave the child the middle name of Carolina, in honor of the nun. “Maria di Gesu opens the door to find the way for pregnancies."

In fact, Maltese has such a strong devotion to Blessed Maria of Jesus that she is traveling to Italy to be at the Vatican for her canonization. 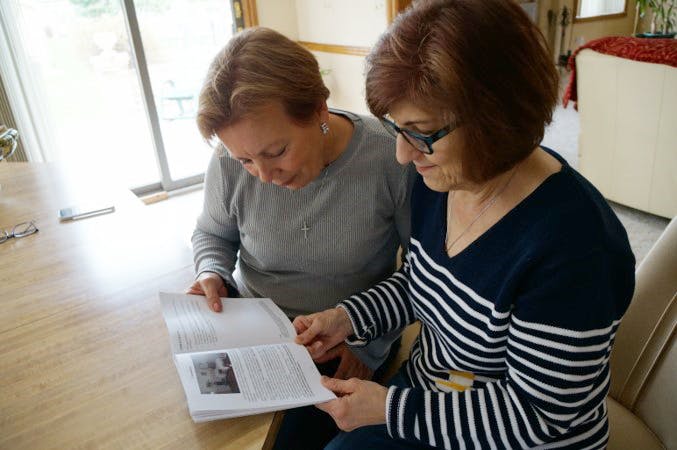 “It’s important to me because I believe in her graces and miracles, but mostly because of her graces,” Maltese said. “I have prayed for her intercession, and I believe that she helps.”

Shelby Township resident Phyllis Palazzolo — no relation to Maria Pia — said she went to Blessed Santocanale’s church on a recent visit to Italy. She wasn’t very familiar with the soon-to-be saint, but was drawn to see her portrait hanging in the church. It led her to want to learn more about Blessed Maria of Jesus.

“I was really impressed by her life,” Phyllis Palazzolo said. “The more I know, the more devoted I feel to her, especially how she blesses a lot of families and everything that she did in her younger age. I am a real believer.”

Now, Palazzolo has been an integral part of helping a local religious and social club, Santa Fara, which is mostly comprised of members who are affiliated with the town of Cinisi.

Locally, a procession and an Italian Mass in honor of St. Maria of Jesus will be held at Holy Family Parish in Detroit on the day of her canonization, May 15, at 11:30 a.m.

Michael Biondo, president of the Santa Fara club, said it's important for the members of his organization to celebrate Blessed Santocanale.

“She is part of our ancestry,” Biondo said. “Our grandfathers probably even knew her. There is a connection there, and we want to keep our religious culture and heritage going in this country.”