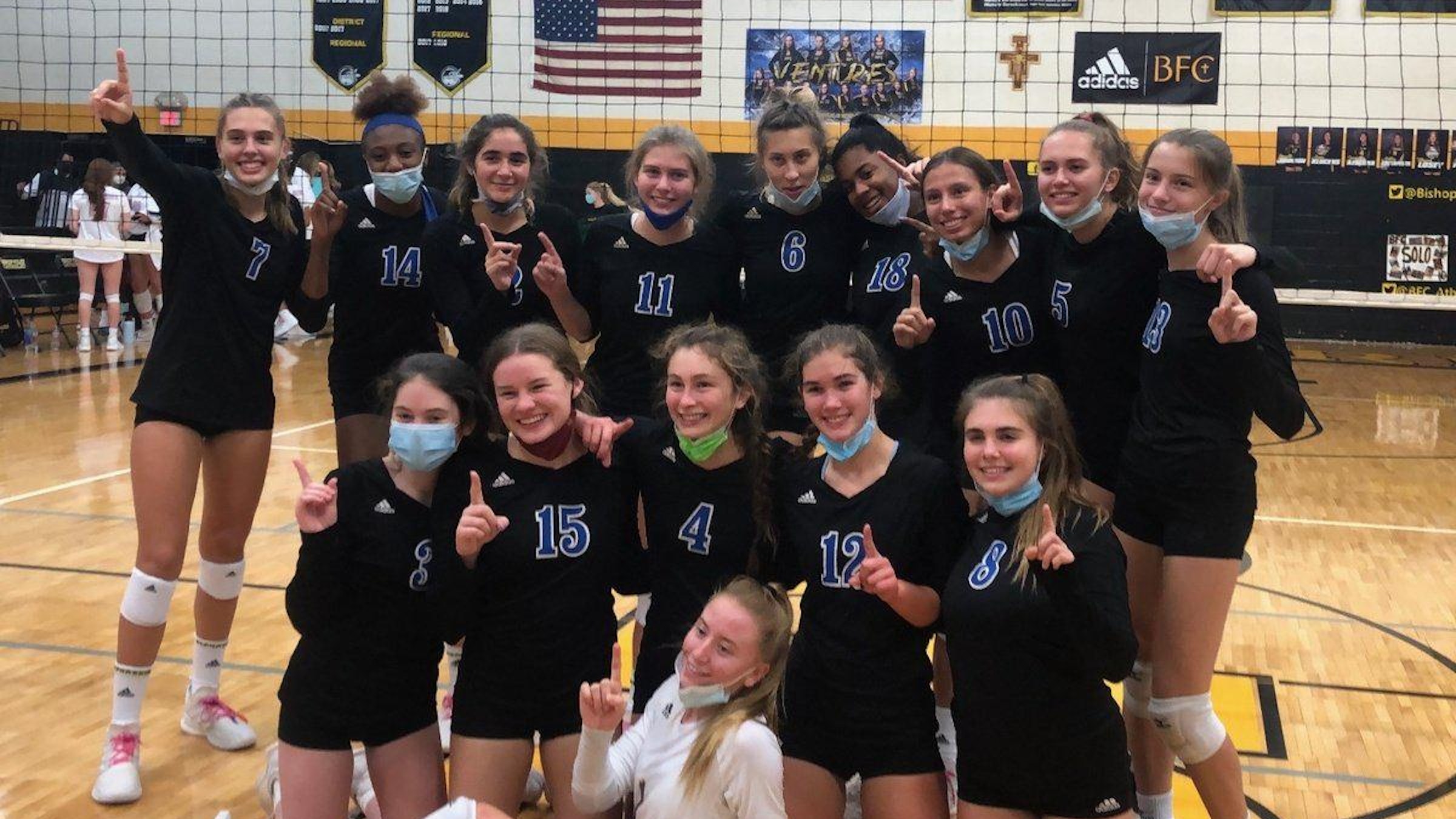 Marian players celebrate their CHSL championship in October 2020, their first in six years. The Mustangs went on to claim the state title, and will be favored to defend that championship in the coming weeks. (Photo courtesy of Dave Feldman)

NOVI — The creme de la creme in high school volleyball will be on full display across the state this week starting with regional semifinals Tuesday evening, Nov. 9.

Nowhere else will the spotlight be shining brighter than in Division 1, where 16 of the top 20 squads will be among the 32 at eight sites vying to advance and keep their hopes alive for a state championship.

No one else will be at the heart and center of all the hoopla than the No. 1-ranked Mustangs of Bloomfield Hills Marian, who won the title last year with a roster that had no seniors and this year, with a core returning group of four seniors and eight juniors, has been on a season-long mission to repeat.

“I have confidence in my team that probably they are the favorites, yet we don’t take anything for granted,” coach Mayssa Cook said last August. “They are a very special group of girls, not only in volleyball skills, but in attitude, leadership, character. They know there’s a lot of great talent across the state. They’re not assuming anything.”

Marian will open at 5 p.m. against No. 9 Novi on Novi’s home court. The winner will meet either No. 12 Lake Orion or White Lake Lakeland on Thursday.

Coach Betty Wrobel’s Fighting Irish last won a state crown in 2017. Their most formidable opponent to realizing that goal is No. 2 Grand Rapids Christian, which has won the Division 2 trophy three years in a row.

In Division 3, No. 2-rated Monroe St. Mary Catholic Central has won the state championship two years in a row. Their stumbling block for a three-peat could be No. 1 Muskegon Western Michigan Christian. St. Mary opens at 7:30 p.m. against Ann Arbor Greenhills at Sand Lake High School.

Bloomfield Hills Brother Rice and Clarkston Everest Collegiate have something in common they’d rather not share.

Both were runners-up in state boys soccer finals last Saturday.

In a Division 2 game played at Comstock Park, the Warriors lost their attempt to win the school’s third soccer championship (the others: 2000, 2009) to Grand Rapids Christian, 2-1.

Grand Rapids scored in the first half. Rice’s Romas Mitrius hit the back of the net late in the second half.

Rice’s consolation: they have nine juniors on the roster returning for next year.

Everest had only to travel to Novi to lose 3-0 to Wyoming Potter’s House High School in a Division 4 showdown. The winners scored their goals in a 10-minute span in the first half and then let their defense stifle the Mountaineers playing in their first soccer final.

Four CHSL teams have reached the regional level in the state football playoffs.

In Division 2: Warren De La Salle (10-0) will host Roseville (7-4). Date and kickoff time to be determined. The Pilots’ defense has allowed an average of 11 points. Roseville has averaged 44 points in seven wins.

In Division 8: Everest Collegiate (9-2) will play at Ottawa Lake Whiteford (10-1). Date and kickoff time to be determined. Whiteford beat Everest 60-20 in the 2017 regional, the only time they’ve played each other.

Mercy swims back to back