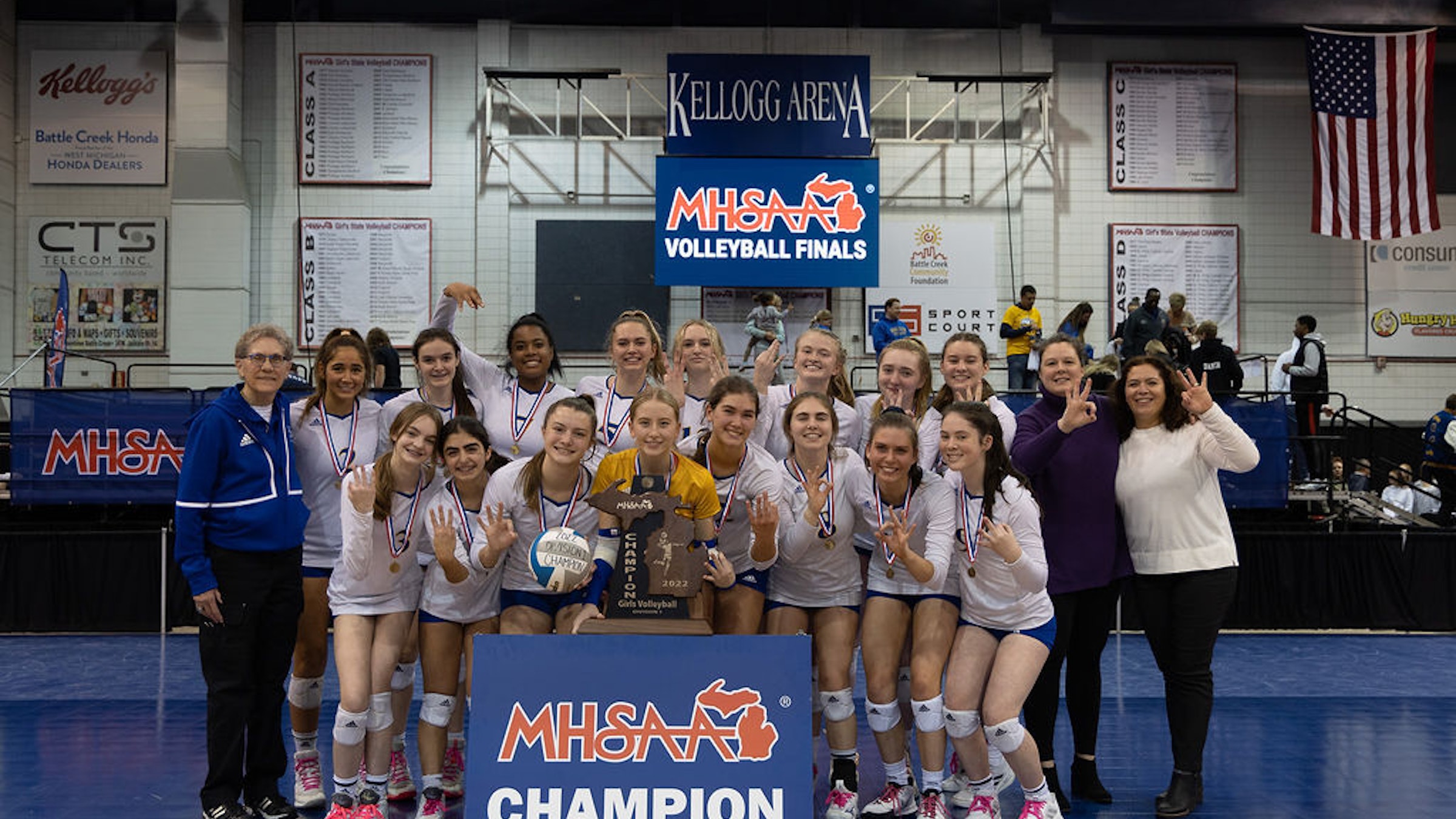 “Three” is the magic number flashed by the Marian volleyball squad after beating Northville for its third consecutive MHSAA Division 1 title. “We earned it. We are the best. We deserve it,” said Coach Mayssa Cook (on far right). (Photo courtesy of Leon Halip Photography)

BATTLE CREEK — The only thing missing when Bloomfield Hills Marian made its way into Kellogg Arena on Nov. 19 was a “Welcome Home” sign.

“This is our home court,” Marian volleyball coach Mayssa Cook said. “We were here our third year in a row. We had the experience of playing on this stage, in this gym. We know the way it smells, it looks, it feels, all that stuff.”

The season-long No. 1-ranked Mustangs showed they had the “stuff” of champions, dropping the first match 22-25 to No. 2-rated Northville, but recovering to win the next three sets 25-22, 25-22, 25-11 to claim its third straight Michigan High School Athletic Association Division 1 championship.

The first two sets were not for the faint of heart. Marian led 18-13 in the first set, but Northville rallied to take a 20-19 lead and held on for the win. Marian had its largest lead, 23-16, in the second set, then had to hold off Northville for the final two winning points.

Northville stormed out to a 19-12 lead in the third set when Cook called a timeout.

With libero Lauren Heming on the service line, a combination of an ace by Heming, three misplays by Northville’s defense, and kills by Reagan Sass, Molly Banta and Ella Schomer, “before you knew it,” Cook said, “it was 19-19.”

The rejuvenated Mustangs turned the tide of the match on a pair of service aces by Banta and three kills by Izzy Busignani.

“Once we had the third set down, up 2-1,” Cook said, “we showed who’s best in the state. Anyone who doubted the three-peat is going to see we earned it. We are the best. We deserve it. It wasn’t enough to win set four. We had to make a statement. Anything that could go right with us went right, and anything that could go wrong for them went wrong.”

Six-foot-one sophomore Busignani with 27 kills and Schomer with 14 provided the power for Marian. Busignani also had 20 digs tied with pint-sized Heming, a four-year varsity player, who, Cook said, “had the match of her life.”

Senior Ava Sarafa had 45 assists to give her a four-year career total of 5,049, the fifth best in the history of Michigan prep volleyball. She has committed to Kentucky.

“She is the total package,” Cook said. “The skills, the focus, the IQ, the leadership, the composure. The way she gets her feet to the ball and the way she delivers the ball to our hitters. As good as a passing team as we are, when we are struggling with our ball control, she finds ways to deliver the ball.”

Reflecting on Marian’s three state titles, Cook, in her fifth year at Marian, said it was difficult to say one was better than the other. “Every single one was so special for different reasons. We had to overcome so many different challenges each year,” she said.

“In 2020, we won without any seniors on the team. Farmington Hills Mercy, the defending state champion, had an amazing lineup of seniors. They were favored. We beat them in five sets in the regional final. We were never really pressed after that. The regional final was really the state final.”

Marian swept Lowell 3-0 in the finale.

Marian’s beloved athletic director Dave Feldman had died two days earlier. His passing, 2021 Miss Volleyball Ava Brizard said at the time, “added more fuel to our fire to win a state championship ... to win it for him.”

Cook also directed Ann Arbor Fr. Gabriel Richard to the Class B state championship in 2015. Marian’s other state titles occurred in 2009 and 2010, coached by Irick Gardner.

Marian’s record for the past three years is 137-7.

The Catholic League had seven state champions in the fall sports calendar.