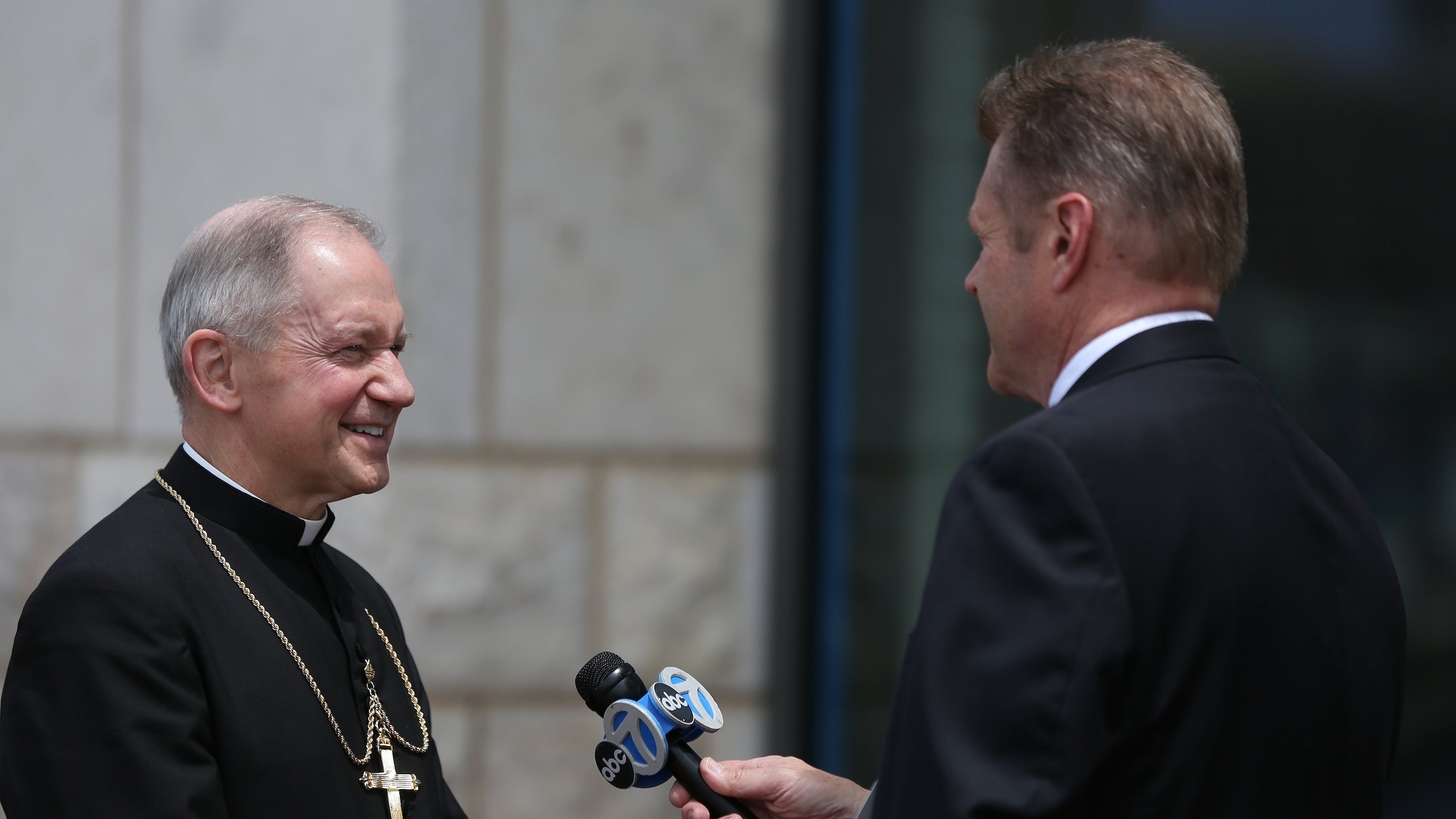 A reporter with ABC News interviews Bishop Thomas J. Paprocki of Springfield, Ill., outside a Baltimore hotel during the spring general assembly of the U.S. Conference of Catholic Bishops June 12, 2019. Pope Francis in his message for World Communications Day Jan. 24, said that the media and the field of communications need to exercise more kindness and share the truth with charity. (OSV News photo/CNS file, Bob Roller)

VATICAN CITY (CNS) ─ The media and the field of communications need to exercise more kindness and share the truth with charity, Pope Francis said.

"Kindness is not only a question of 'etiquette' but a genuine antidote to cruelty, which unfortunately can poison hearts and make relationships toxic," the pope wrote in his message for World Communication Day.

Just as kindness is needed in social relationships, "we need it in the field of media, so that communication does not foment acrimony that exasperates, creates rage and leads to clashes, but helps people peacefully reflect and interpret with a critical yet always respectful spirit, the reality in which they live," he added.

"We are all called to seek and to speak the truth and to do so with charity," he said in the message released at the Vatican Jan. 24, the feast of St. Francis de Sales, the patron saint of journalists.

The theme of the 2023 celebration -- marked in most dioceses the Sunday before Pentecost, this year May 21 -- is "Speaking with the heart. 'The truth in love.'"

"We should not be afraid of proclaiming the truth, even if it is at times uncomfortable," the pope said, but communicators should fear "doing so without charity, without heart."

Communicating should be done "in a cordial manner," he said, one that is rooted in love for the other and caring about and protecting the other's freedom.

The world today is marked by polarization and division, and even the church is not immune, he said.

"We Christians in particular are continually urged to keep our tongue from evil," he said, choosing instead words that edify, fit the occasion and "may impart grace to those who hear."

"In the church, too, there is a great need to listen to and to hear one another," he said. When people listen attentively and openly without prejudice, it "gives rise to speaking according to God's style, nurtured by closeness, compassion and tenderness."

There is a "pressing need in the church for communication that kindles hearts, that is balm on wounds and that shines light on the journey of our brothers and sisters" as well as that lets itself be guided by the Holy Spirit, he said.

The church, he wrote, needs communication that: is both gentle and prophetic; finds new ways to proclaim the Gospel today; puts the faithful's relationship with God, with others, especially the neediest, at the center; lights "the fire of faith rather than preserve the ashes of a self-referential identity"; is based on "humility in listening and 'parrhesia' (boldness) in speaking"; and never separates truth from charity.

And, the pope said, the wider world needs people who speak from that heart and promote "a language" or culture of peace, especially where there is war, as well as make way for "dialogue and reconciliation in places where hatred and enmity rage."

"True peace can only be built in mutual trust," which needs "bold and creative" communicators who are willing "to take risks to find common ground on which to meet" and "helps create the conditions to resolve controversies between peoples," the pope said in his message.

Because words can often turn into "warlike actions of heinous violence," he said, "all belligerent rhetoric must be rejected, as well as every form of propaganda that manipulates the truth, disfiguring it for ideological ends."

St. Francis de Sales still provides an important reminder that "we are what we communicate," he said.

St. Paul VI said the saint's writings are "highly enjoyable, instructive and moving," which are precisely the things every article, report, television or radio program and social media post should include, Pope Francis said.

"May people who work in communications feel inspired by this saint of tenderness, seeking and telling the truth with courage and freedom and rejecting the temptation to use sensational and combative expressions," he said.