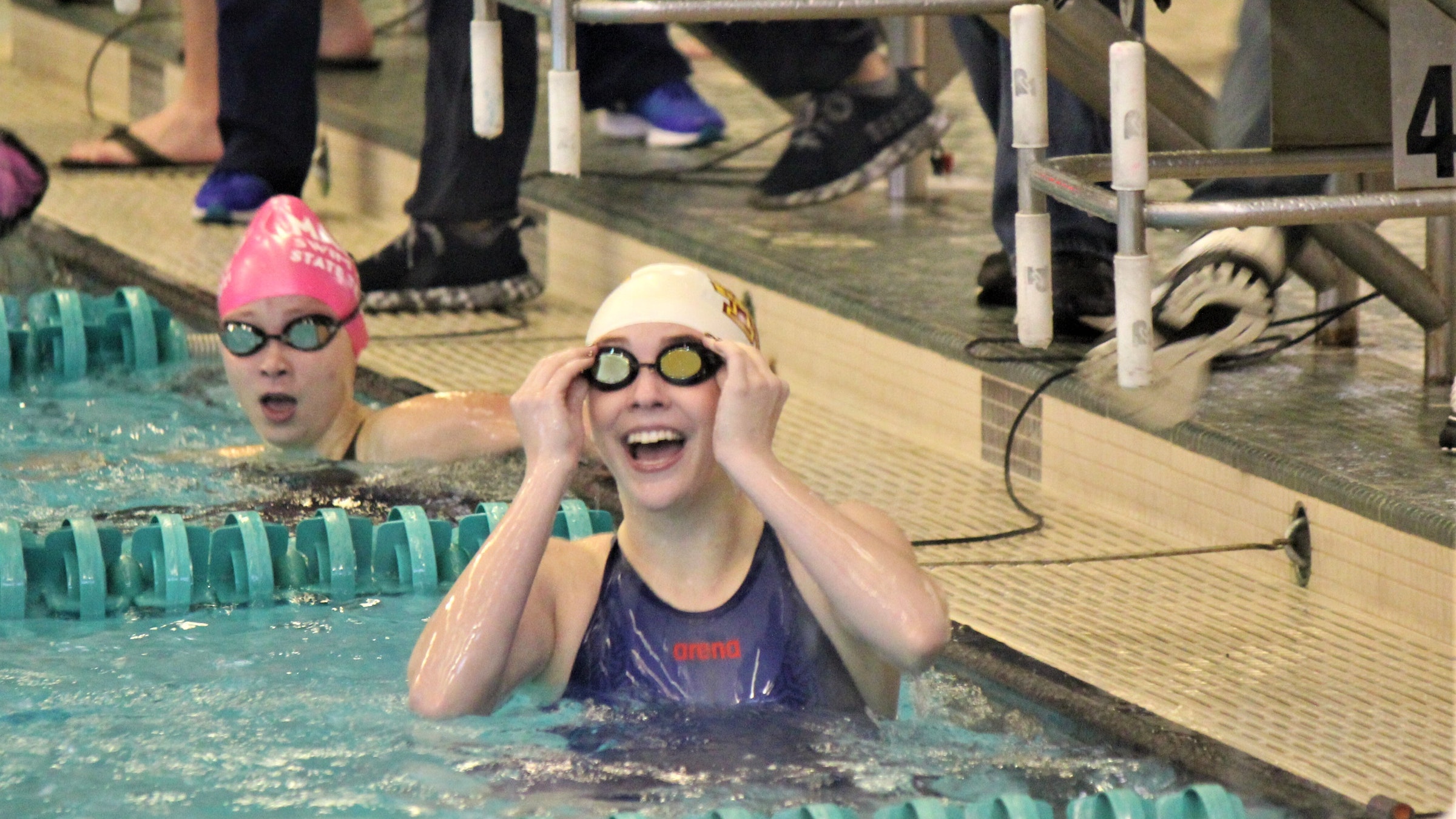 With teammate Lily Cochrane looking on, Mercy’s Alexis Conway reacts with surprise after seeing her time in the 100-yard backstroke. The 12th-grader won the race with a time of 1:00.17 – three seconds ahead of the rest of the field. (Photos by Wright Wilson | Special to Detroit Catholic)

FARMINGTON HILLS — For the same team to win a Catholic League swimming championship 54 out of the last 55 years, there must be something in the water.

But to hear Farmington Hills Mercy senior captain Sydney Derkevorkian sum it up, it comes down to camaraderie and tradition.

“It’s never about winning for us,” she said. “You just all have fun, and we really represent that the ‘M’ on our chest and on our cap, and we all know what that means. The spirit we all bring is shown in the water.”

“We swim for the girls who swam before us and for the girls who will come after us,” fellow captain Alexis Conway said. “That’s what we need to focus on: not ourselves, but the team, and representing that ‘M’ on our caps.

“It makes me feel a level of honor and respect for this team. I don’t attribute it to one thing besides Mercy.” 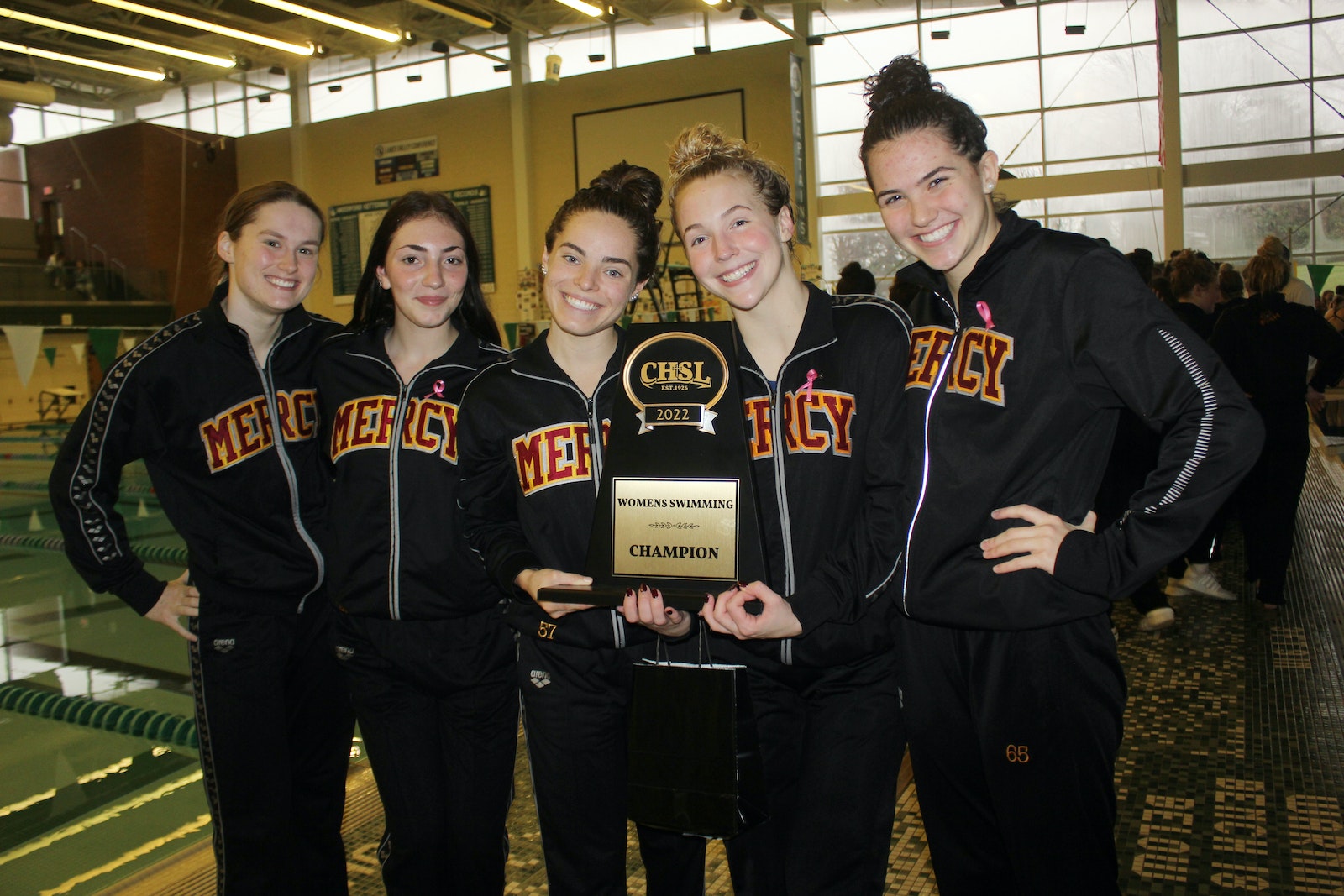 The Marlins successfully upheld that tradition this season with another Catholic League championship — as they’ve done each year (but one) since 1967. Mercy outdistanced the seven-team field in the league finals held Saturday at Waterford Kettering High School.

Head coach Mike Venos has been connected to 14 of Mercy’s titles — six as a coach, four as a parent, and his wife won four as a student. But Venos said this one is special, on the 50th anniversary of the enactment of Title IX, which enhanced opportunities for female student-athletes.

“We’ve talked a lot about the history of Mercy, the passage of Title IX in 1972 — that year was the very first girls state championship, and Mercy won it at Rochester High School,” Venos said. “We talk a lot about the tradition; we talk about what it means to swim with the Mercy on your cap, and I really think that’s something that sets them apart, and I hope it’s something that helps us go fast.” 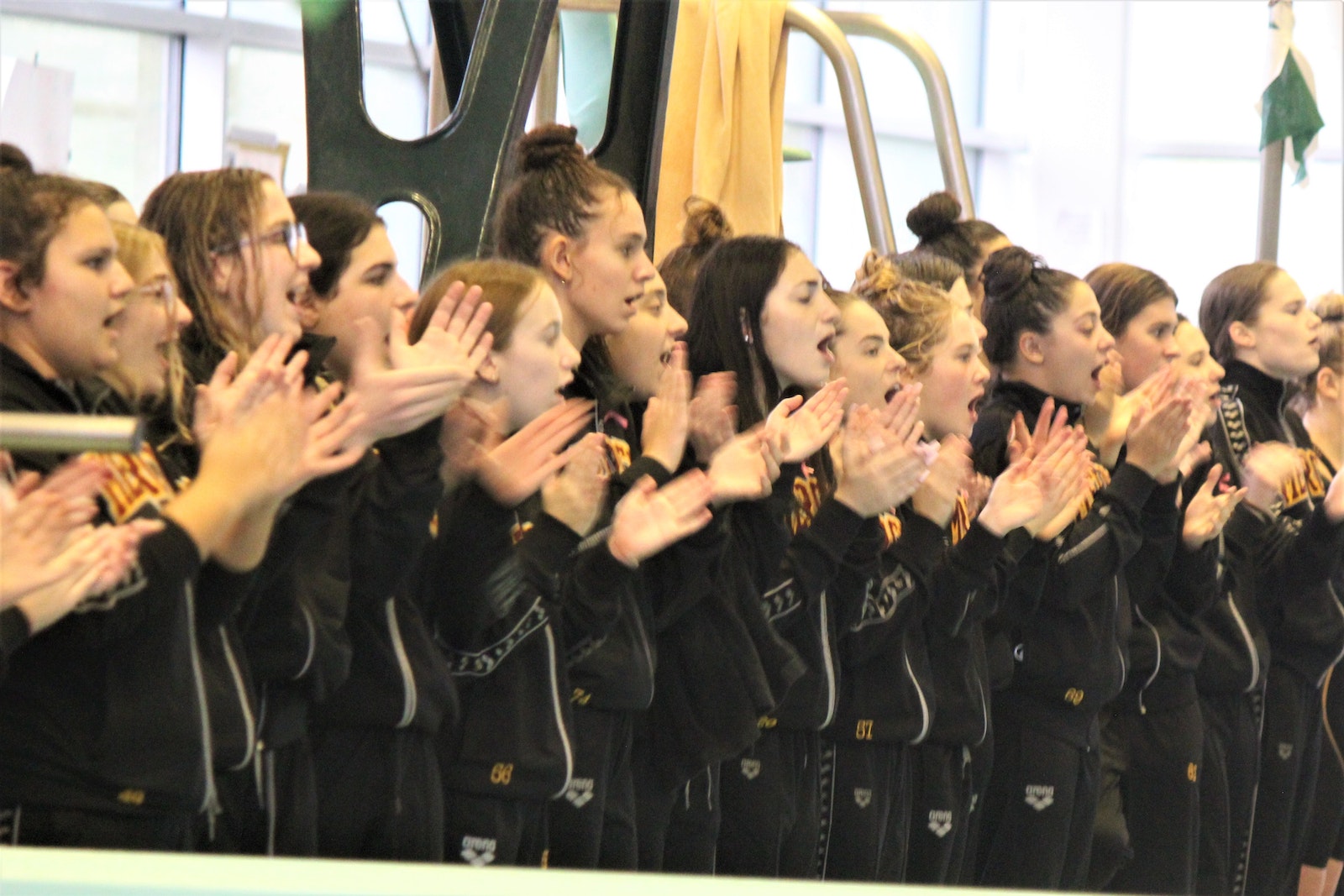 Mercy swimmers line the deck to cheer on their teammates during the meet’s final event, the 400-yard freestyle relay. Not only did the Marlins win that race, they swept first place in the three relay races.

But Dekervorkian didn’t claim any more credit than her other 50 teammates.

“It's really fun because the whole team gets to participate in this meet,” she said. “When we’re at the state meet not everyone gets to swim, so it’s always really, really fun to see everyone’s hard work pay off.”

“It’s a total team responsibility,” she said. “We all add to the team in our own way, whether that’s times or personalities or effort or morale. I’d say the most important factor is love, loving one another. I have a lot of love for every single girl on this team and it means a lot to me.”

For Venos, those remarks mean more than any single victory, place or time. 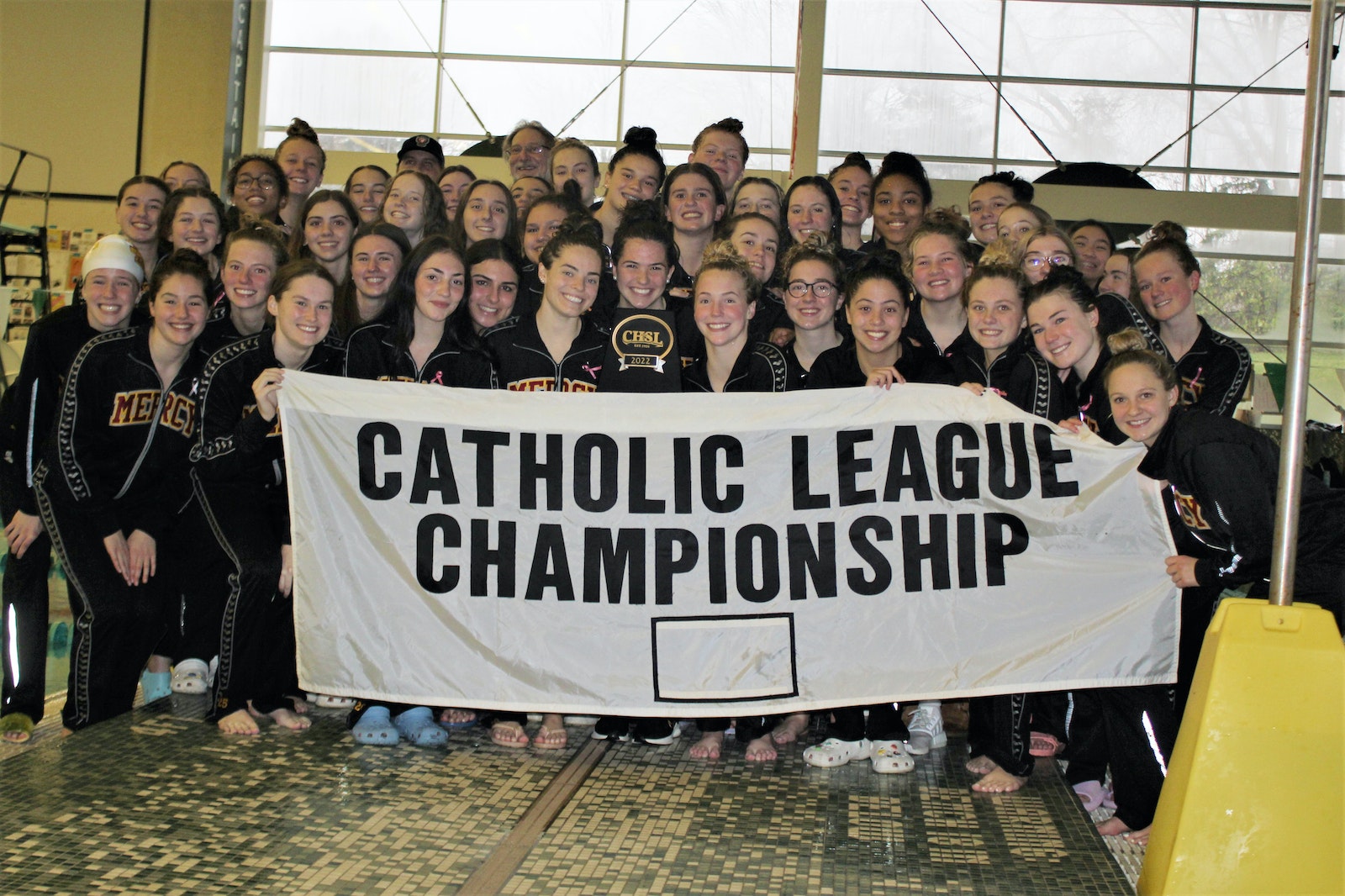 As if an annual routine, Mercy finished comfortably ahead of the other six Catholic League teams. The 2022 championship is Mercy’s 54th in the last 55 seasons.

Mercy, rated fourth in the state, will bring 13 participants to the Division 1 championship meet at Oakland University in Rochester Hills. The Marlins have won 12 state championships in the past.

“Quite honestly, we just want to go there and do the best that we can,” Venos said. “They understand that we can’t control what place we get; we can only control what we do in our own lane. We let the chips fall where they do — we just go there to swim as fast as we can and whatever happens, happens.

Marian and Cranbrook are ranked second and third among Division 3 teams. Their final meet will be at the Holland Aquatic Center. Cranbrook has won four state titles in the past, while Marian has claimed three.