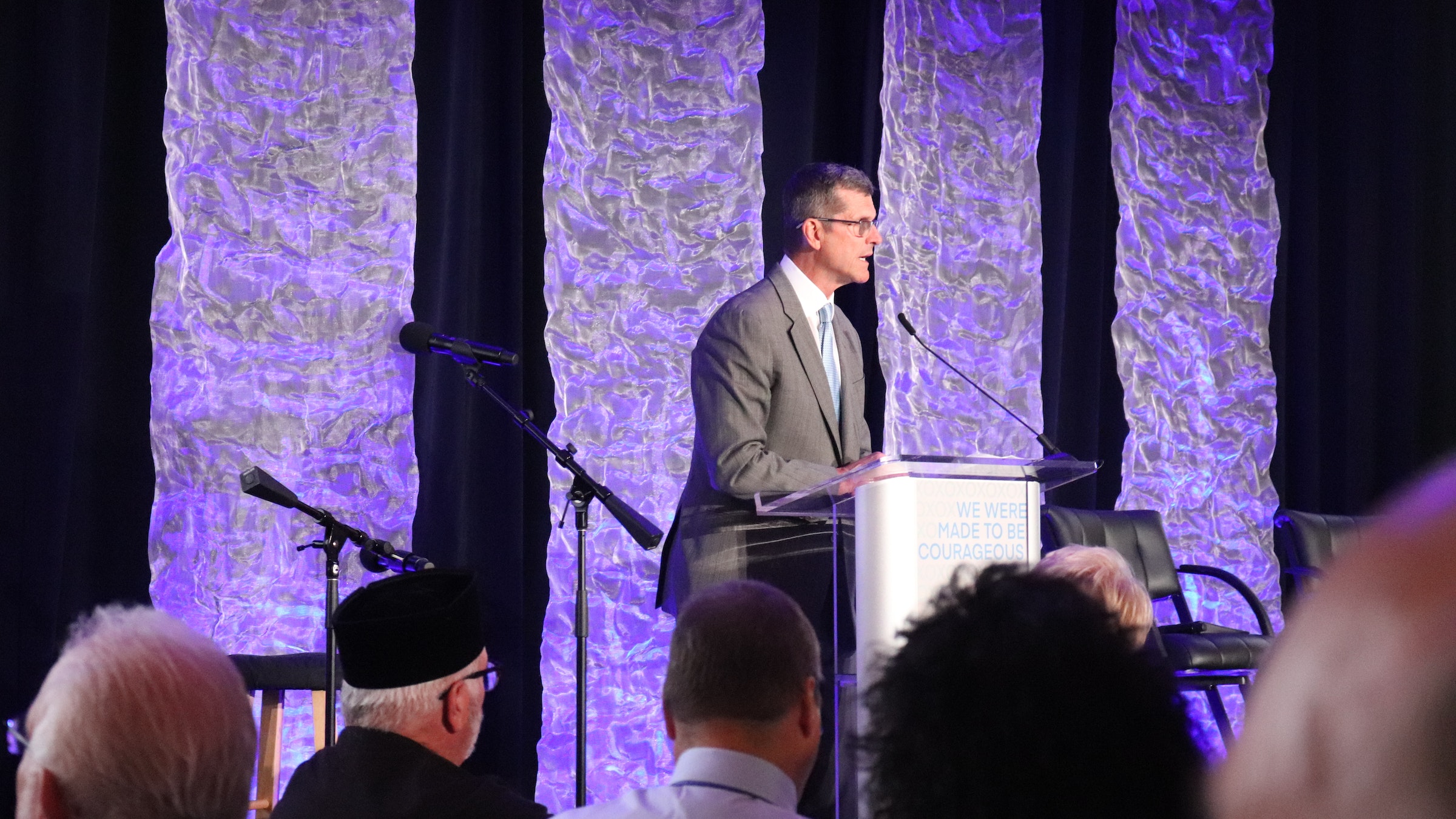 Michigan football coach Jim Harbaugh gives a keynote address July 17 during the Plymouth Right to Life dinner and auction at the Inn at St. John's in Plymouth. Harbaugh spoke about how he and his wife, Sarah, promote a whole-life ethic both in their family and the Michigan athletics community and why they fight to protect life. (Courtesy of John Stockwell)

PLYMOUTH — Fr. John Riccardo and coach Jim Harbaugh, two well-known names in their respective professions, were the keynote speakers July 17 during the Plymouth Right to Life dinner and auction at the Inn at St. John’s in Plymouth.

The ACTS XXIX founder and Big Ten-winning University of Michigan football coach, respectively, shared the stage to give their own pro-life witness during the sold-out event, which supported various life-affirming charities and initiatives in Metro Detroit.

“Thank you to Jim and Sarah (Harbaugh’s wife, who spoke during the evening’s question-and-answer session) for being here,” Fr. Riccardo said. “Your presence here speaks volumes about the people you are, the courage and commitment you have on this critical issue.”

“We Were Made to be Courageous” was the theme of the night, and Harbaugh spoke about the courage it takes in today’s world to state one’s convictions with a clear intent and to follow up on those convictions.

“I believe in having the courage to let the unborn be born,” Harbaugh said. “I love life. I believe in having a loving care and respect for life and death. My faith and my science are what drive these beliefs in me. Quoting from Jeremiah, ‘Before I formed you in the womb, I knew you. Before you were born, I set you apart. I appointed you as a prophet to the nations.'”

Harbaugh, a Catholic, spoke about how his pro-life convictions were instilled in him from a young age by his parents, adding those values inform his relationship with his own children, and well as with his players and staff at the University of Michigan.

Harbaugh said he knows not everyone agrees with his perspective on the issue, adding it's important to be clear about what one believes, why one believes it, and to follow through on those convictions.

Conversations regarding the right to life can be especially testy given the recent overturning of Roe v. Wade and the ballot question on whether abortion rights will be enshrined in the Michigan Constitution, Harbaugh said.

“Passions can make the process messy, but when combined with respect, it ultimately produces the best outcomes,” Harbaugh said. “This process has been passionate and messy, but I have faith in the American people to ultimately develop the right policies and laws for all lives involved. I recognize one’s personal thinking regarding morality of a particular action may differ from their thinking on whether government should make that action illegal. There are many things one may hold to be immoral, but the government appropriately allows because of some greater good or personal or constitutional right.

“Ultimately, I don’t believe that is the case with abortion,” Harbaugh continued. “Yes, there are conflicts between the legitimate rights of the mother and the rights of the unborn child. One resolution might involve incredible hardship for the mother, family and society. Another results in the death of an unborn person."

Neither outcome is good, Harbaugh said, but between the two, the life of the unborn person must win out.

This year’s dinner and auction come at an important time for the pro-life movement, Fr. Riccardo said, when advocates are celebrating the end of Roe but preparing for the next battle in ensuring Michigan is a life-affirming state.

“You and I were made for this moment, for these times,” Fr. Riccardo said. “There is a temptation for many of us as we get older to look backward and be nostalgic. We are not allowed to get nostalgic. The best is not in the past; the best is ahead. God will return, Jesus will recreate this world He loves. There will be a new heaven and new earth. 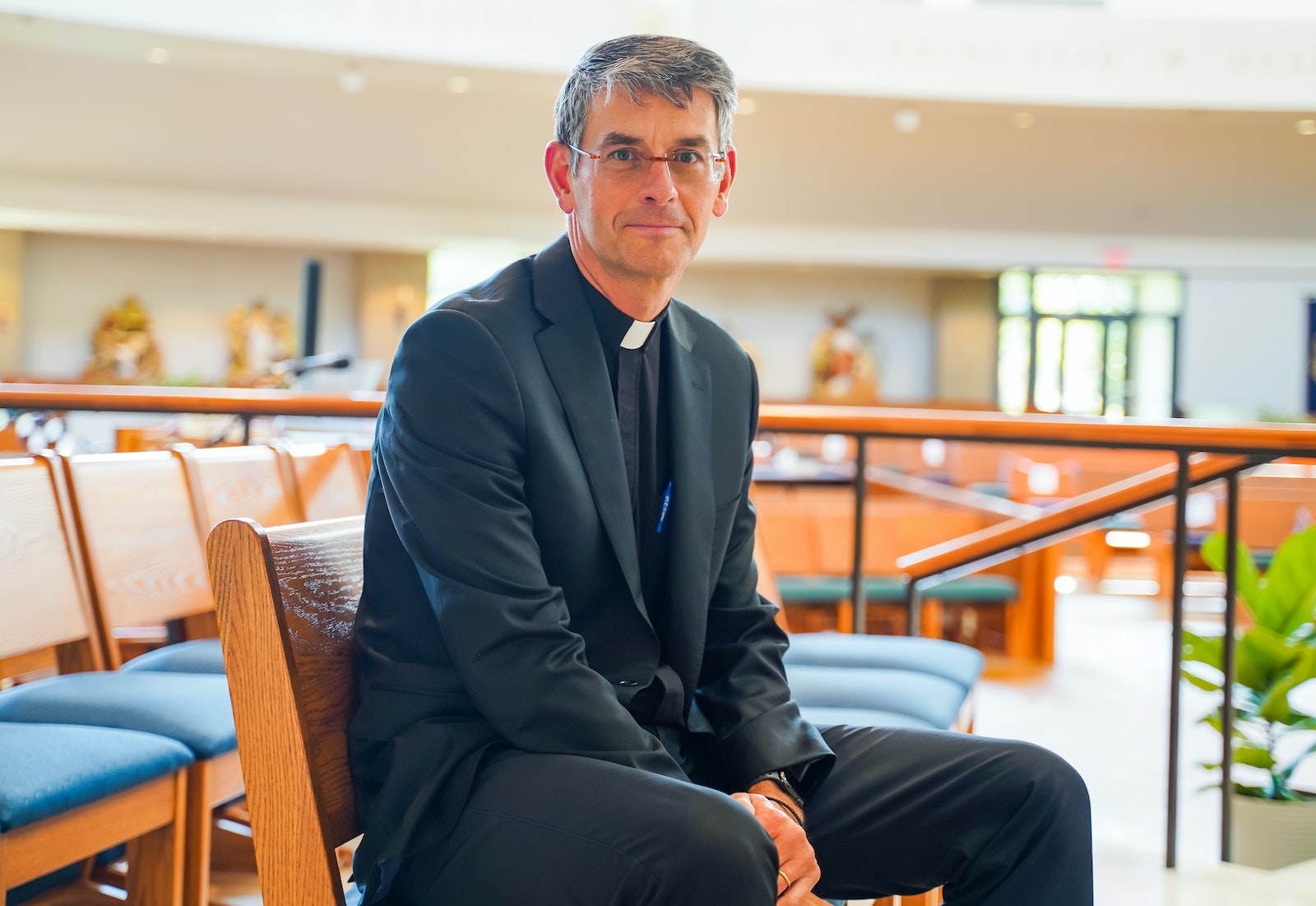 "Do not long for an easier time, if for no other reason than there never was one," Fr. Riccardo continued. "God could have created us to be alive in any moment in history, but he chose for us to be alive now in these critical days for us to make an impact not only in our country, but especially in our state.”

During his keynote address, Fr. Riccardo said pro-lifers need to be precise in their language when discussing why they are opposed to abortion, including understanding the ghastly nature of the procedure. In more advanced stages of human development, the abortionist uses medical devices to tear apart the body of an unborn child and remove it piecemeal before using a suction device to clear out the rest.

Fr. Riccardo noted the lack of media depictions of how abortions are performed is a way to cover up the violence involved in the procedure — a subtle tactic he argues makes abortion more socially palatable.

“I pray there are a number of people here who are not pro-life, but came here because of this man (pointing at Harbaugh), and Michigan football,” Fr. Riccardo said. “I want you to know that you are very welcome here; we are so glad that you came and simply want to ask God to help us see reality.”

Harbaugh noted that being pro-life means supporting programs for mothers and families and reaching out to women who are expecting and need assistance.

“In God’s plan, each unborn human truly has a future filled with potential, talent, dreams and love,” Harbaugh said. “I have living proof in my family, my children, and the many thousands that I’ve coached that the unborn are amazing gifts from God to make this world a better place. To me, the right choice is to have the courage to let the unborn be born.”

After the keynotes, Sarah Harbaugh gave her own testimony as the couple shared how they promote their pro-life values.

“From an early age, my mom and dad would go to a Planned Parenthood and pray,” Sarah Harbaugh said. “I feel my mom was a big influence for me, both my parents talked about protecting the unborn. I have friends, even family, who have considered abortion or had an abortion, and I know they are not better for it. If we had more support for women, more people who knew what really happens, we would be in a different place on this issue.” 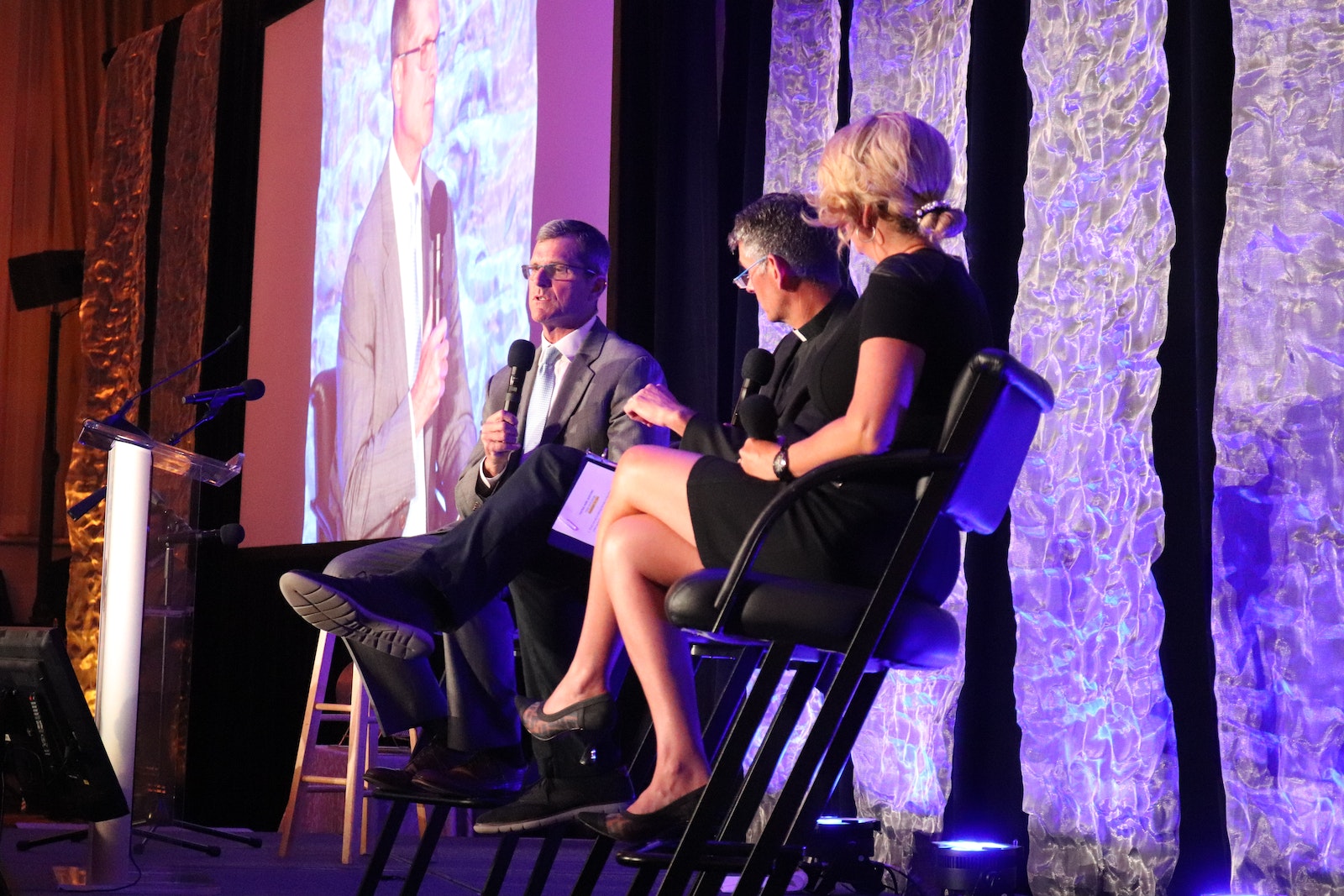 Fr. John Riccardo of Acts XXIX, center, hosts Jim and Sarah Harbaugh in a question-and-answer session about their pro-life advocacy and how their values shape their lives and professions. (Courtesy of John Stockwell)

After the talks, various Michigan football memorabilia, resorts and even dinner with Fr. Riccardo and the Harbaughs was auctioned off, raising an estimated $44,000 for pro-life initiatives in the area. Donors also gave an estimated $100,000 in pledges for Plymouth Right to Life, including a donor who paid $2,300 to catch a cross-ballroom spiral from Harbaugh.

Fr. Riccardo asked attendees to be clear as the debate on abortion shifts back to the state level.

“Abortion exists because the child is denied the status of personhood, and that is crucial,” Fr. Riccardo said. “This is where we as men and women need to do everything we can to think clearly, speak clearly and calmly, which almost never happens on this issue. For lots of reasons, we don’t seem to be able to think clearly on this topic.

At the close of the Q&A session, Fr. Riccardo asked Jim and Sarah Harbaugh whether they ever worry about being “canceled” over their pro-life advocacy.

Sarah said there have been suggestions that their stance might impact recruiting or job prestige, but the couple feels they are doing things “for the right reasons.”

“During halftime of a game, talking with the players, I say they are here because they have chosen to be here,” Jim Harbaugh said. “If someone believes in what they stand for, they are choosing to stand for that position, and what kind of person are you if you don’t fight tooth and nail for what you stand for? You get to change hearts by fighting for what you stand for.”